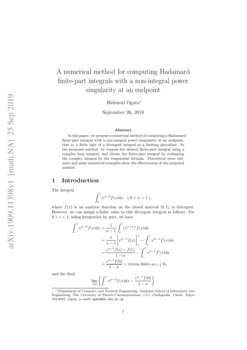 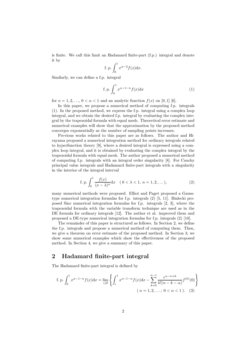 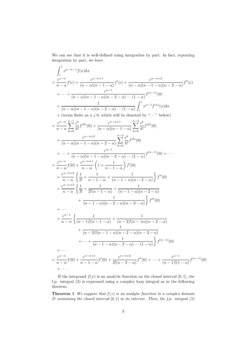 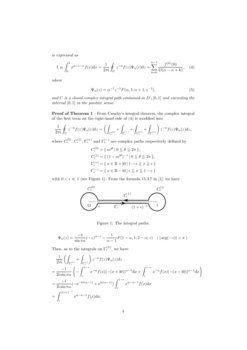 In this paper, we propose a numerical method of computing an integral wh...
Hidenori Ogata, et al. ∙

Computing the matrix fractional power based on the double exponential formula

where f(x) is an analytic function on the closed interval [0,1], is divergent. However, we can assign a finite value to this divergent integral as follows. For 0<ϵ<1, using integration by part, we have

is finite. We call this limit an Hadamard finite-part (f.p.) integral and denote it by

Similarly, we can define a f.p. integral

Previous works related to this paper are as follows. The author and Hirayama proposed a numerical integration method for ordinary integrals related to hyperfunction theory [8], where a desired integral is expressed using a complex loop integral, and it is obtained by evaluating the complex integral by the trapezoidal formula with equal mesh. The author proposed a numerical method of computing f.p. integrals with an integral order singularity [10]. For Cauchy principal value integrals and Hadamard finite-part integrals with a singularity in the interior of the integral interval

The Hadamard finite-part integral is defined by

If the integrand f(x) is an analytic function on the closed interval [0,1], the f.p. integral (3) is expressed using a complex loop integral as in the following theorem.

We suppose that f(z) is an analytic function in a complex domain D containing the closed interval [0,1] in its interior. Then, the f.p. integral (3) is expressed as

and C is a closed complex integral path contained in D∖[0,1] and encircling the interval [0,1] in the positive sense.

From Cauchy’s integral theorem, the complex integral of the first term on the right-hand side of (4) is modified into

The first term on the right-hand side is written as

and the second term is written as

and, then, the integral on C(1)ϵ is of O(ϵlogϵ). Summarizing the above calculations, we have

We can obtain the desired f.p. integral (3) by evaluating the complex integral in (4) on the closed integral path C, which is parameterized by z=φ(u), 0≦u≦up, by the trapezoidal formula with equal mesh as follows.

The hypergeometric function in the definition of Ψα(z) in (5) is easily evaluated using the continued fraction expansion (see §12.5 in [7]). If C is an analytic curve, the complex loop integral is an integral of an analytic periodic function on an interval of one period, to which the trapezoidal formula with equal mesh is very effective, and, then, the approximation formula (6) is very accurate. In fact, applying the theorem in §4.6.5 in [4] to the approximation of the complex integral in (6), we have the following theorem on error estimate of the proposed approximation.

Then, we have for arbitrary 0<d′<d

This theorem says that the proposed approximation (6) converges exponentially as the number of sampling points N increases if f(x) is an analytic periodic function and C is an analytic curve.

We remark here that, if f(z) is real valued on the real axis, we can reduce the number of sampling points by half. In fact, in this case, we have

from the reflection principle, and, taking the integral path C to be symmetric with respect to the real axis, that is,

In this section, we show some numerical examples which show the effectiveness of the proposed method. We computed the integrals

with α=0.1 by the approximation formula (9). All the computations were performed using programs coded in C++ with double precision working. The complex integral path C was taken as the ellipse

In this paper, we proposed a numerical method of computing Hadamard finite part integrals with a non-integral power singularity on an endpoint. In the proposed method, we express the desired f.p. integral using a complex loop integral, and obtain the f.p. integral by evaluating the complex integral by the trapezoidal formula with equal mesh. Theoretical error estimate and some numerical examples showed the exponential convergence of the proposed method.

We can obtain similarly f.p. integrals on an infinite interval. This will be reported in a future paper.