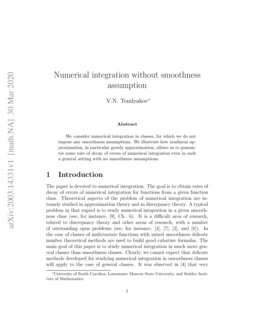 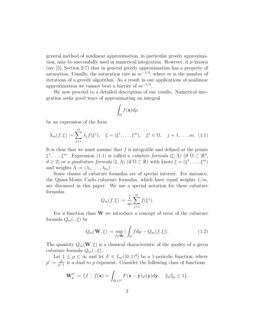 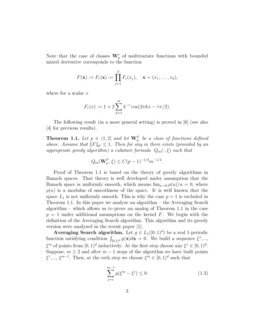 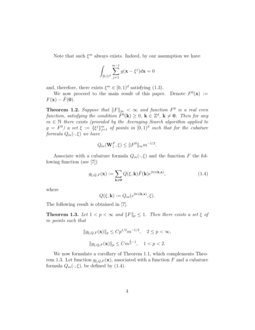 Chebyshev approximation and the global geometry of sloppy models

We now proceed to a detailed description of our results. Numerical integration seeks good ways of approximating an integral

by an expression of the form

For a function class W we introduce a concept of error of the cubature formula Qm(⋅,ξ) by

The quantity Qm(W,ξ) is a classical characteristic of the quality of a given cubature formula Qm(⋅,ξ).

where for a scalar x

The following result (in a more general setting) is proved in [6] (see also [4] for previous results).

Let p∈(1,2] and let WFp be a class of functions defined above. Assume that ∥F∥p′≤1. Then for any m there exists (provided by an appropriate greedy algorithm) a cubature formula Qm(⋅,ξ) such that

Proof of Theorem 1.1 is based on the theory of greedy algorithms in Banach spaces. That theory is well developed under assumption that the Banach space is uniformly smooth, which means limu→0ρ(u)/u=0, where ρ(u) is a modulus of smoothness of the space. It is well known that the space L1 is not uniformly smooth. This is why the case p=1 is excluded in Theorem 1.1. In this paper we analyze an algorithm – the Averaging Search algorithm – which allows us to prove an analog of Theorem 1.1 in the case p=1 under additional assumptions on the kernel F. We begin with the definition of the Averaging Search algorithm. This algorithm and its greedy version were analyzed in the recent paper [1].

Note that such ξm always exists. Indeed, by our assumption we have

Suppose that ∥F∥∞<∞ and function F0 is a real even function, satisfying the condition ^F0(k)≥0, k∈Zd, k≠0. Then for any m∈N there exists (provided by the Averaging Search algorithm applied to g=F0) a set ξ:={ξj}mj=1 of points in [0,1)d such that for the cubature formula Qm(⋅,ξ) we have

Associate with a cubature formula Qm(⋅,ξ) and the function F the following function (see [7])

The following result is obtained in [7].

We now formulate a corollary of Theorem 1.1, which complements Theorem 1.3. Let function gξ,Q,F(x), associated with a function F and a cubature formula Qm(⋅,ξ), be defined by (1.4).

Suppose that ∥F∥∞<∞ and function F0 is a real even function, satisfying the condition ^F0(k)≥0, k∈Zd, k≠0. Then for any m∈N there exists (provided by the Averaging Search algorithm applied to g=F0) a set ξ:={ξj}mj=1 of points in [0,1)d such that

We note that the Averaging Search algorithm is not a greedy type algorithm. The following greedy version of this algorithm has been studied in a very recent paper [1].

Greedy Averaging Search algorithm. Let g be a real continuous 1-periodic function satisfying condition ∫[0,1)dg(x)dx=0. We build a sequence ξ1,…, ξm of points from [0,1)d inductively. At the first step choose any ξ1∈[0,1)d. Suppose, m≥2 and after m−1 steps of the algorithm we have built points ξ1,…, ξm−1. Then, at the mth step we choose ξm∈[0,1)d such that

We begin with a simple identity, which was used in [3] in a context of numerical integration (see also [1]).

Let g be a 1-periodic function with absolutely convergent Fourier series satisfying condition ∫[0,1)dg(x)dx=0. For a given set of points Xm:={xj}mj=1, denote

For the reader’s convenience we present this simple proof here. We have

Performing summation with respect to n and j we obtain the required identity. ∎

By our assumption on the F0 we obtain

We now set xj=ξj with ξj obtained from the Averaging Search algorithm applied to g=F0. Then, we have

Acknowledgment. The work was supported by the Russian Federation Government Grant No. 14.W03.31.0031.