We propose a new numerical integration method for training a shallow neural network by using the ridgelet transform with a fast convergence guarantee. Given a training dataset, the ridgelet transform can provide the parameters of the neural network that attains the global optimum of the training problem. In other words, we can obtain the global minimizer of the training problem by numerically computing the ridgelet transform, instead of by numerically optimizing the so-called backpropagation training problem. We employed the kernel quadrature for the basis of the numerical integration, because it is known to converge faster, i.e. O(1/p) with the hidden unit number p, than other random methods, i.e. O(1/√(p)), such as Monte Carlo integration methods. Originally, the kernel quadrature has been developed for the purpose of computing posterior means, where the measure is assumed to be a probability measure, and the final product is a single number. On the other hand, our problem is the computation of an integral transform, where the measure is generally a signed measure, and the final product is a function. In addition, the performance of kernel quadrature is sensitive to the selection of its kernel. In this paper, we develop a generalized kernel quadrature method with a fast convergence guarantee in a function norm that is applicable to signed measures, and propose a natural choice of kernels. 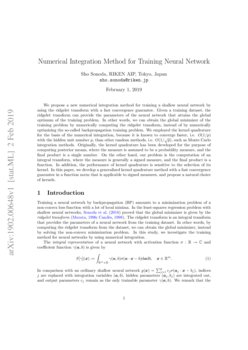 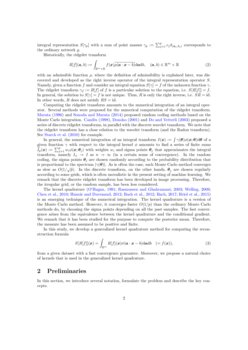 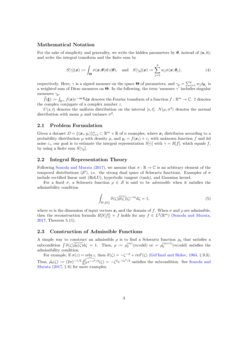 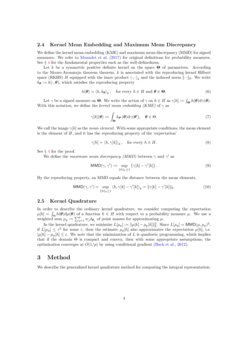 Training a neural network by backpropagation (BP) amounts to a minimization problem of a non-convex loss function with a lot of local minima. In the least-squares regression problem with shallow neural networks,

of a neural network with activation function

In comparison with an ordinary shallow neural network g(x)=∑pj=1cjσ(aj⋅x−bj), indices j are replaced with integration variables (a,b), hidden parameters (aj,bj) are integrated out, and output parameters cj remain as the only trainable parameter γ(a,b). We remark that the integral representation S[γp] with a sum of point masses γp:=∑pj=1cjδ(aj,bj) corresponds to the ordinary network g.

with an admissible function ρ, where the definition of admissibility is explained later, was discovered and developed as the right inverse operator of the integral representation operator S. Namely, given a function f and consider an integral equation S[γ]=f of the unknown function γ. The ridgelet transform γf:=R[f] of f is a particular solution to the equation, i.e. S[R[f]]=f. In general, the solution to S[γ]=f is not unique. Thus, R is only the right inverse, i.e. SR=id. In other words, R does not satisfy RS=id.

In general, the numerical integration of an integral transform I(x):=∫γ(θ)ϕ(x;θ)dθ of a given function γ with respect to the integral kernel ϕ amounts to find a series of finite sums ˆIp(x):=∑pj=1wiϕ(x;θj) with weights wi and sigma points θj that approximates the integral transform, namely In→I as n→∞ (in a certain sense of convergence). In the random coding, the sigma points θj

|γ(θ)|. As is often the case, such Monte Carlo method converges as slow as O(1/√p). In the discrete transform, on the other hands, θj

are chosen regularly according to some grids, which is often unrealistic in the present setting of machine learning. We remark that the discrete ridgelet transform has been developed in image processing. Therefore, the irregular grid, or the random sample, has been less considered.

The kernel quadrature (O’Hagan, 1991; Rasmussen and Ghahramani, 2003; Welling, 2009; Chen et al., 2010; Huszár and Duvenaud, 2012; Bach et al., 2012; Bach, 2017; Briol et al., 2015) is an emerging technique of the numerical integration. The kernel quadrature is a version of the Monte Carlo method. However, it converges faster O(1/p) than the ordinary Monte Carlo methods do, by choosing the sigma points depending on all the past samples. The fast convergence arises from the equivalence between the kernel quadrature and the conditional gradient. We remark that it has been studied for the purpose to compute the posterior mean. Therefore, the measure has been assumed to be positive and finite.

In this study, we develop a generalized kernel quadrature method for computing the reconstruction formula

from a given dataset with a fast convergence guarantee. Moreover, we propose a natural choice of kernels that is used in the generalized kernel quadrature.

In this section, we introduce several notation, formulate the problem and describe the key concepts.

For the sake of simplicity and generality, we write the hidden parameters by θ, instead of (a,b); and write the integral transform and the finite sum by

respectively. Here, γ is a signed measure on the space Θ of parameters, and γp=∑pj=1wjδθj is a weighted sum of Dirac measures on Θ. In the following, the term ‘measure γ’ includes singular measures γp.

denotes the Fourier transform of a function

denotes the uniform distribution on the interval

denotes the normal distribution with mean

Given a dataset D={(xi,yi)}ni=1⊂Rm×R of n examples, where xi distributes according to a probability distribution μ with density μ, and yi=f(xi)+εi with unknown function f and iid noise εi

, our goal is to estimate the integral representation

Following Sonoda and Murata (2017), we assume that σ:R→C is an arbitrary element of the tempered distributions (S′), i.e. the strong dual space of Schwartz functions. Examples of σ

For a fixed σ, a Schwartz function ρ∈S is said to be admissible when it satisfies the admissibility condition

is the dimension of input vectors

) or =ρ(m+1)0(m:odd) satisfies the admissibility condition.

We define the kernel mean embedding (KME) and maximum mean discrepancy (MMD) for signed measures. We refer to Muandet et al. (2017) for original definitions for probability measures. See § 4 for the fundamental properties such as the well-definedness.

Let k be a symmetric positive definite kernel on the space Θ of parameters. According to the Moore-Aronszajn theorem theorem, k is associated with the reproducing kernel Hilbert space (RKHS) H equipped with the inner product ⟨⋅,⋅⟩k and the induced norm ∥⋅∥k. We write kθ:=k(⋅,θ), which satisfies the reproducing property

Let γ be a signed measure on Θ. We write the action of γ on h∈H as γ[h]:=∫Θh(θ)dγ(θ). With this notation, we define the kernel mean embedding (KME) of γ as

We call the image γ[k] as the mean element. With some appropriate conditions, the mean element is the element of H, and it has the reproducing property of the ‘expectation’

By the reproducing property, an MMD equals the distance between the mean elements.

In order to describe the ordinary kernel quadrature, we consider computing the expectation μ[h]=∫Θh(θ)dμ(θ) of a function h∈H with respect to a probability measure μ. We use a weighted sum μp:=∑pj=1wjδθj of point masses for approximating μ.

In the kernel quadrature, we minimize L[μp]:=∥μ[k]−μp[k]∥2k. Since L[μp]=MMD(μ,μp)2, if L[μp]≤ε2 for some ε, then the estimate μp[h] also approximates the expectation μ[h], i.e. |μ[h]−μp[h]≤ε. We note that the minimization of L is quadratic programming, which implies that if the domain Θ is compact and convex, then with some appropriate assumptions, the optimization converges at O(1/p) by using conditional gradient (Bach et al., 2012).

We describe the generalized kernel quadrature method for computing the integral representation.

Therefore, in the same way as the ordinary kernel quadrature, if we minimize L[γp]:=∥γ[k]−γp[k]∥2k by using conditional gradient, then we can approximate S[γ] by S[γp] at the rate O(1/p) in the sense of uniform convergence. This is faster than O(p−1/2), which is attained by an ordinary Monte Carlo integration method (Sonoda and Murata, 2014).

We define the inner product of activations (IPA) kernel:

with activation function σ and data distribution μ. By construction, it is a reproducing kernel. The interpretation of kσ is simple: kσ(θ,θ′) measures the similarity between two functions σ(x;θ) and σ(x;θ′) in the sense of L2(μ). Furthermore, the empirical estimation is straightforward: ˆkσ(θ,θ′)=1n∑ni=1σ(xi;θ)¯¯¯¯¯¯¯¯¯¯¯¯¯¯¯¯¯σ(xi;θ).

For γ=R[f], the mean element is calculated as below:

We note that the mean element results in another ridgelet transform, say R′, with respect to σ and μ, which corresponds to the adjoint operator of S. Namely, R′ satisfies ⟨R′[f],γ⟩L2(Θ)=⟨f,S[γ]⟩L2(μ) for any f∈L2(μ) and γ∈L2(Θ).

We investigate the fundamental properties of the KME for signed measures and vector-valued measures.

Let (V,|⋅|) be a Banach space, and let μ be a V-valued vector measure on a measurable space (Ω,B). |μ| denote the total variation of μ. μ[f(X)] denotes the integral ∫Ωf(x)dμ(x) of a measurable function f on Ω. We have the following inequality.

We fix a measurable positive definite kernel k:Ω×Ω→C on Ω. Let Mk(Ω;V) be the collection of finite V-valued vector measures on Ω that satisfies

We define the KME for a vector measure μ∈Mk(Ω;V) as

For an arbitrary μ∈Mk(Ω;V), we define a linear functional . Then, Lμ is bounded because

Therefore, μ[kX]∈H. By the Riesz’s representation theorem, there exists μ[kX]∈H for any f∈H such that Lμ[f]=⟨f,μ[kX]⟩k. In particular, the reproducing property of the ‘expectation’ holds:

A bounded measurable positive definite kernel k on Ω is said to be characteristic when the KME operator M(Ω;V)→H;μ↦μ[kX] is injective. In other words, k is characteristic if and only if

We claim that if the KME operator with respect to k is injective on the collection P(Ω) of probability measures on Ω, then it is also injective on MTV(Ω;Rd).

First, we consider the KME for signed measures. Recall that L:MTV(Ω;R)→H;μ↦μ[kX] is a bounded linear operator. Since SpanRP(Ω)⊂MTV(Ω;R), the restriction L|P(Ω) is injective. We show the converse: If L|P(Ω) is injective, then L is injective. Assume that there exist μ,ν∈MTV(Ω;R) that satisfies L[μ]=L[ν]. Since SpanRP(Ω)=MTV(Ω;R) (because SpanRP(Ω)⊂MTV(Ω;R) is obvious and the converse follows from Hahn’s decomposition theorem), we can take a basis {pi}di=1 of MTV(Ω;R) that is composed of the elements of P(Ω). Thus, by rewriting μ=∑diμipi and ν=∑diνipi, we have ∑di=1μiL[pi]=∑di=1νiL[pi]. By the assumption that L|P(Ω) is injective, the image set {L[pi]} is linearly independent, which concludes μi=νi for every components. Namely, μ=ν.

Then, we consider the KME for vector measures. Assume that μ,ν∈MTV(Ω;Rd) satisfies μ[kX]=ν[kX]. In other words, μi[kX]=νi[kX] for every component μi and νi(i=1…,d). In each component, we can reuse the result for the KME for signed measures, and obtain μi=νi, (i=1,…,d), which concludes μ=ν. ∎

Methods. We compared two methods: (IS) importance sampling of sigma points θj from the probability distribution that is proportional to |R[f](θ)|, which corresponds to the existing methods (Sonoda and Murata, 2014); and (GKQ) generalized kernel quadrature, or greedy minimization of the MMD with IPA kernel, which is the proposed method. In both methods, we determined weights wj

Network. We employed the shallow neural network, and the activation function σ was the first derivative of Gaussian kernel.

compares the error decay of IS and GKQ (proposed). In the comparison of RMSE, both IS and GKQ reached the gray line, which is the standard deviation of the noise in the dataset. This indicates that the numerical integration was conducted correctly in both cases. IS decayed along the red line, which corresponds to the slower rate

O(1/√p). On the other hand, GKQ decayed along the blue line, which corresponds to the faster rate O(1/p).

We have developed a generalized kernel quadrature (GKQ) method for the integral representation operator S[γ] with a fast convergence guarantee, and proposed a natural kernels, i.e. IPA kernels. Numerical experiments showed that the proposed method converged faster than the existing method (IS) that uses the Monte Carlo integration. The key finding is the uniform bound (11) of the approximation error by the MMD. By using conditional gradient, we can decrease the MMD at O(1/p). As a result, we can decrease the approximation error faster than the ordinary Monte Carlo mehods.

The author is grateful to N. Murata for suggesting the topic treated in this paper. The author would like to thank T. Suzuki and T. Matsubara for useful discussions. This work was supported by JSPS KAKENHI 18K18113.