In this paper, using well-known complex variable techniques, we compute explicitly, in terms of the _2F_1 Gaussian hypergeometric function, the one-dimensional fractional Laplacian of the Higgins functions, the Christov functions, and their sine-like and cosine-like versions. After discussing the numerical difficulties in the implementation of the proposed formulas, we develop a method using variable precision arithmetic that gives accurate results. 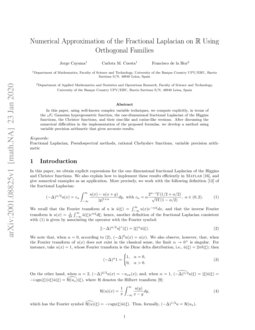 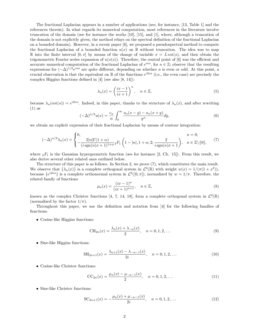 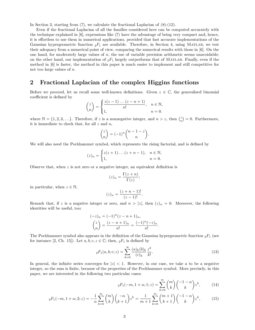 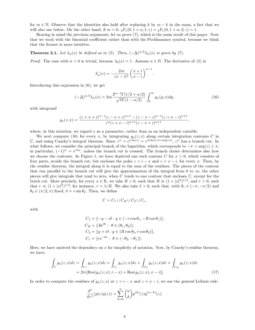 A Pseudospectral Method for the One-Dimensional Fractional Laplacian on R

In this paper, we propose a novel pseudospectral method to approximate a...
Jorge Cayama, et al. ∙

Generalised Hermite functions and their applications in Spectral Approximations

In this paper, we obtain explicit expressions for the one dimensional fractional Laplacian of the Higgins and Christov functions. We also explain how to implement these results efficiently in Matlab [16], and give numerical examples as an application. More precisely, we work with the following definition [12] of the fractional Laplacian:

We recall that the Fourier transform of

u is ^u(ξ)=∫∞−∞u(x)e−ixξdx, and that the inverse Fourier transform is u(x)=12π∫∞−∞^u(ξ)eixξdξ; hence, another definition of the fractional Laplacian consistent with (1) is given by associating the operator with the Fourier symbol:

is even or odd. At this point, a crucial observation is that the equivalent on

because λn(cot(s))=ei2ns. Indeed, in this paper, thanks to the structure of λn(x), and after rewriting (1) as

we obtain an explicit expression of their fractional Laplacian by means of contour integration:

where 2F1 is the Gaussian hypergeometric function (see for instance [2, Ch. 15]). From this result, we also derive several other related ones outlined below.

Throughout this paper, we use the definition and notation from [4] for the following families of functions:

Even if the fractional Laplacian of all the families considered here can be computed accurately with the technique explained in [6], expressions like (7) have the advantage of being very compact and, hence, it is effortless to use them in numerical applications, provided that fast accurate implementations of the Gaussian hypergeometric function 2F1 are available. Therefore, in Section 4, using Matlab, we test their adequacy from a numerical point of view, comparing the numerical results with those in [6]. On the one hand, for moderately large values of n, the use of variable precision arithmetic seems unavoidable; on the other hand, our implementation of 2F1 largely outperforms that of Matlab. Finally, even if the method in [6] is faster, the method in this paper is much easier to implement and still competitive for not too large values of n.

Before we proceed, let us recall some well-known definitions. Given z∈C, the generalized binomial coefficient is defined by

We will also need the Pochhammer symbol, which represents the rising factorial, and is defined by

Observe that, when z is not zero or a negative integer, an equivalent definition is

Remark that, if z is a negative integer or zero, and n>|z|, then (z)n=0. Moreover, the following identities will be useful, too:

The Pochhammer symbol also appears in the definition of the Gaussian hypergeometric function 2F1 (see for instance [2, Ch. 15]). Let a,b,c,z∈C; then, 2F1 is defined by

In general, the infinite series converges for |z|<1. However, in our case, we take a to be a negative integer, so the sum is finite, because of the properties of the Pochhammer symbol. More precisely, in this paper, we are interested in the following two particular cases:

Bearing in mind the previous arguments, let us prove (7), which is the main result of this paper. Note that we work with the binomial coefficient rather than with the Pochhammer symbol, because we think that the former is more intuitive.

Introducing this expression in (6), we get

where, in this notation, we regard x as a parameter, rather than as an independent variable.

We next compute (16) for every x, by integrating gn(z;x) along certain integration contours C in C, and using Cauchy’s integral theorem. Since zα=eαln(z)=eα(ln(z)+iarg(z)), zα has a branch cut. In what follows, we consider the principal branch of the logarithm, which corresponds to −π<arg(z)≤π; in particular, (−1)α=eiπα, unless the branch cut is crossed. The branch choice determines also how we choose the contours. In Figure 1, we have depicted one such contour C for x>0, which consists of four parts, avoids the branch cut, but encloses the poles z=i−x and z=x−i, for every x. Then, by the residue theorem, the integral along it is equal to the sum of the residues. The pieces of the contour that run parallel to the branch cut will give the approximation of the integral from 0 to ∞; the other pieces will give integrals that tend to zero, when C tends to one contour that encloses C, except for the brach cut. More precisely, for every x∈R, we take R>0, such that R≫(1+|x|2)1/2, and r>0, such that r≪(1+|x|2)1/2, for instance, r=1/R. We also take δ>0, such that, with θ1∈(−π,−π/2) and θ2∈(π/2,π) fixed, δ=rsinθ2. Then, we define

Here, we have omitted the dependecy on x for simplicity of notation. Now, by Cauchy’s residue theorem, we have:

In order to compute the residues of gn(z;x) at z=i−x and z=x−i, we use the general Leibniz rule:

In this way, we obtain

Finally, after some manipulations, we have

where we have used (15). Substituting this last expression into (16), and using Euler’s reflection formula,

3 Fractional Laplacian of other families of functions

Moreover, the expression for n=0 reduces to

First, we note that μn(x) can be expressed in terms of λn(x) as follows:

so we just have to use (7) and simplify the resulting expression. First we assume that n∈N. Substituting (7) into this last equation, and using that (n+1k+1)=(nk+1)+(nk), we get

and (26) also holds. Finally, when n is a negative integer, we observe that

Before we compute the fractional Laplacian of the cosine-like and sine-like Higgins functions (9) and (10), we first express (7) as a polynomial on x times a negative power of (isgn(n)x+1).

We now interchange the order of the sums and replace the indices l by n−1−l and k by n−1−k; then, after some rewriting, we get,

As a consequence of Lemma 3.1, we also have the following result.

The fractional Laplacian of (9) and (10) is given respectively by

Since CH2n(x) and SH2n(x) are real, their fractional Laplacian is also real. We thus want to obtain expressions of (−Δ)α/2CH2n(x) and (−Δ)α/2SH2n(x) that avoid the use of complex numbers. To do this, we express all the complex numbers in (32) in their polar form: e.g., iα=eiπα/2,