We study the convergences of several FFT-based schemes that are widely applied in computational homogenization for deriving effective coefficients, and the term "convergence" here means the limiting behaviors as spatial resolutions going to infinity. Those schemes include Moulinec-Suquent's scheme [Comput Method Appl M, 157 (1998), pp. 69-94], Willot's scheme [Comptes Rendus Mécanique, 343 (2015), pp. 232-245], and the FEM scheme [Int J Numer Meth Eng, 109 (2017), pp. 1461-1489]. Under some reasonable assumptions, we prove that the effective coefficients obtained by those schemes are all convergent to the theoretical ones. Moreover, for the FEM scheme, we can present several convergence rate estimates under additional regularity assumptions. 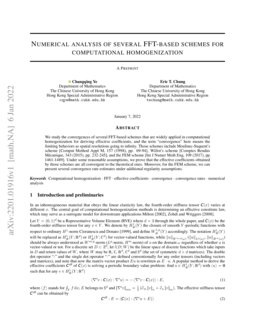 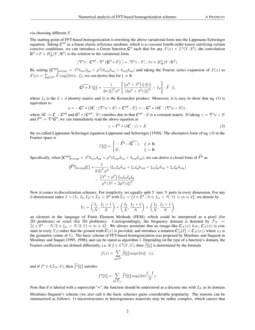 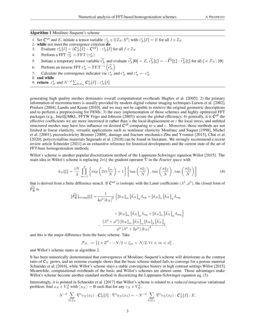 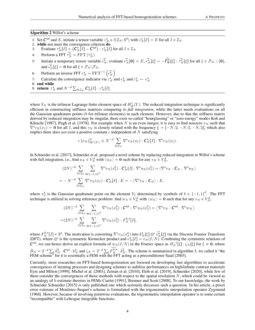 We prove convergence of a finite difference approximation of the compres...
Hana Mizerova, et al. ∙

We present a new scheme to compensate for the small-scales approximation...
Denise Lanzieri, et al. ∙

We give a unified method to derive the strong convergence rate of the ba...
Zhihui Liu, et al. ∙

In an inhomogeneous material that obeys the linear elasticity law, the fourth-order stiffness tensor

\tensorsymC(\vectorsymx) varies at different \vectorsymx. The central goal of computational homogenization methods is determining an effective constitute law, which may serve as a surrogate model for downstream applications Milton (2002); Zohdi and Wriggers (2008).

Let Y=(0,1)d be a Representative Volume Element (RVE) where d=3 through the whole paper, and \tensorsymC(\vectorsymx) be the fourth-order stiffness tensor for any \vectorsymx∈Y. We denote by H1#(Y) the closure of smooth Y-periodic functions with respect to ordinary H1-norm Cioranescu and Donato (1999), and define W1,p#(Y) accordingly. The notation H1#(Y) will be replaced as H1#(Y;Rd) or H1#(Y;Cd)

for vector-valued functions, while

∥u∥Wm,p(ω) (∥u∥Lp(ω), ∥u∥Hm(ω)) should be always understood as Wm,p-norm (Lp-norm, Hm-norm) of u on the domain ω regardless of whether u is vector-valued or not. For a discrete set D⊂Zd, let l(D;W) be the linear space of discrete functions which take inputs in D and return values of W, where W may be R, C, Rd, Cd and Sd (the set of symmetric d×d matrices). The double dot operator “:” and the single dot operator “⋅” are defined conventionally for any order tensors (including vectors and matrices), and note that now the matrix-vector product \matrixsymE\vectorsymu is rewritten as \matrixsymE⋅\vectorsymu. A popular method to derive the effective coefficients \tensorsymCeff of \tensorsymC(\vectorsymx) is solving a periodic boundary value problem: find \vectorsymu∈H1#(Y;Rd) with ⟨\vectorsymu⟩=\vectorsym0 such that for any \vectorsymv∈H1#(Y;Rd)

The starting point of FFT-based homogenization is rewriting the above variational form into the Lippmann-Schwinger equation. Taking \tensorsymCref as a linear elastic reference medium, which is a constant fourth-order tensor satisfying certain coercive conditions, we can introduce a Green function \tensorsymG0 such that for any \matrixsymF(\vectorsymx)∈L2(Y;Sd), the convolution \tensorsymG0∗\matrixsymF∈H1#(Y;Rd) is the solution to the variational form

where \matrixsymId is the d×didentity matrix and ⊗ is the Kronecker product. Moreover, it is easy to show that eq. 1 is equivalent to

the so-called Lippmann-Schwinger equation Lippmann and Schwinger (1950). The alternative form of eq. 3 in the Fourier space is

Specifically, when [\tensorsymCref]mnpq=λ0δmnδpq+μ0(δmpδnq+δmqδnp), we can derive a closed form of ˆ\tensorsymΓ0 as

Now it comes to discretization schemes. For simplicity, we equally split Y into N parts in every dimension. For any d-dimensional index \vectorsymI=(\vectorsymI1,\vectorsymI2,\vectorsymI3)∈IN⊂Zd with IN={\vectorsymI∈Zd:0≤\vectorsymIm<N,∀1≤m≤d}, we denote by

an element in the language of Finite Element Methods (FEM), which could be interpreted as a pixel (for 2D problems) or voxel (for 3D problems). Correspondingly, the frequency domain is denoted by

Note that if is labeled with a superscript “⋆”, the function should be understood as a discrete one with IN as its domain.

Moulinec-Suquent’s scheme (we also call it the basic scheme) gains considerable popularity. The reasons can be summarized as follows: 1) microstructures in heterogeneous materials may be rather complex, which causes that generating high quality meshes dominates overall computational overheads Hughes et al. (2005); 2) the primary information of microstructures is usually provided by modern digital volume imaging techniques Larson et al. (2002); Poulsen (2004); Landis and Keane (2010), and we may not be capable to retrieve the original geometric descriptions and to perform a preprocessing for FEMs; 3) the easy implementation of those schemes and highly optimized FFT packages (e.g., Intel®MKL, FFTW Frigo and Johnson (2005)) secure the global efficiency; 4) generally, it is \tensorsymCeff the effective coefficients we are more interested in rather than \vectorsymu the local displacement or \matrixsymε the local stress, and unfitted structured meshes may have less influence on desired \tensorsymCeff comparing to \vectorsymu and \matrixsymε. Moreover, those methods are not limited in linear elasticity, versatile applications such as nonlinear elasticity Moulinec and Suquet (1998); Michel et al. (2001), piezoelectricity Brenner (2009), damage and fracture mechanics Zhu and Yvonnet (2015); Chai et al. (2020), polycrystalline materials Segurado et al. (2018) can be found in literature. We strongly recommend a recent review article Schneider (2021) as an exhaustive reference for historical developments and the current state of the art of FFT-base homogenization methods.

Willot’s scheme is another popular discretization method of the Lippmann-Schwinger equation Willot (2015). The main idea in Willot’s scheme is replacing 2πi\vectorsymξ the gradient operator ∇ in the Fourier space with

that is derived from a finite difference stencil. If \tensorsymCref is isotropic with the Lamé coefficients (λ0,μ0), the closed form of ˆ\tensorsymΓ0W is

and this is the major difference from the basic scheme. Take

and Willot’s scheme states as algorithm 2.

It has been numerically demonstrated that convergences of Moulinec-Suquent’s scheme will deteriorate as the contrast ratio of \tensorsymCN grows, and an extreme example shows that the basic scheme indeed fails to converge for a porous material Schneider et al. (2016), while Willot’s scheme stays a stable convergence history in high contrast settings Willot (2015). Meanwhile, computational overheads of the basic and Willot’s schemes are almost same. Those advantages make Willot’s scheme become another standard method in discretizing the Lippmann-Schwinger equation eq. 3.

Interestingly, it is pointed in Schneider et al. (2017) that Willot’s scheme is related to a reduced integration variational problem: find \vectorsymuN∈VdN with ⟨\vectorsymuN⟩=\vectorsym0 such that for any \vectorsymvN∈VdN,

where VN is the trilinear Lagrange finite element space of H1#(Y). The reduced integration technique is significantly efficient in constructing stiffness matrices comparing to full integration, while the latter needs evaluations on all the Gaussian quadrature points (8 for trilinear elements) in each element. However, due to that the stiffness matrix derived by reduced integration may be singular, there exist so-called “hourglassing” or “zero-energy” modes Koh and Kikuchi (1987); Pugh et al. (1978). For example when N is an even integer, it is easy to find nonzero \vectorsymvN such that ∇s\vectorsymvN(\vectorsymx\vectorsymI)=\vectorsym0 for all \vectorsymI, and this \vectorsymvN is closely related with the frequency \vectorsymξ=[−N/2,−N/2,−N/2], which also implies there does not exist a positive constant c independent of N satisfying

where \vectorsymx\vectorsymI\vectorsymb is the Gaussian quadrature point on the element Y\vectorsymI determined by symbols of \vectorsymb∈{−1,1}d. The FFT technique is utilized in solving reference problem: find \vectorsymwN∈VdN with ⟨\vectorsymwN⟩=\vectorsym0 such that for any \vectorsymvN∈VdN,

via the Discrete Fourier Transform (DFT), where

Currently, most researches on FFT-based homogenization are focused on developing fast algorithms to accelerate convergences of iterating processes and designing schemes to stabilize performances on high/infinite contrast materials Eyre and Milton (1999); Michel et al. (2001); Zeman et al. (2010); Eloh et al. (2019); Schneider (2020), while few of them consider the convergences of those methods with respect to the spatial resolution N, which could be viewed as an analogy of h-estimate theories in FEMs Ciarlet (1991); Brenner and Scott (2008). To our knowledge, the work by Schneider Schneider (2015) is only published one which seriously discusses such a question. In his article, a priori error estimate of Moulinec-Suquet’s scheme is formulated with the trigonometric interpolation operator Zygmund (1968). However, because of involving pointwise evaluations, the trigonometric interpolation operator is to some certain “incompatible” with Lebesgue integrable functions.

The RVE domain Y consists of (M+1) Lipschitz subdomains that are labeled by D0,D1,…,DM, and \tensorsymC(\vectorsymx) only takes a constant tensor \tensorsymΛl in each subdomain Dl.

(coercivity) there exist positive constants Λ′ and Λ′′ such that for any \matrixsymF∈Sd and 0≤l≤M,

In some cases, we will use the notation C(p1,p2,…,pn) to represent a positive constant C which depends on p1,p2,…,pn.

Here are the contributions and structure of this article:

and PN:L2(Y;C)→L2(Y;C) be the orthogonal projection onto SN Conway (1990). Take GN(\vectorsymx)\coloneqqNd1CN(\vectorsymx) where the set CN is the cube with \vectorsym0 as its center and 1/N as its edge length. In the following analysis, for a function f∈L2(Y;C), the convolution GN∗f should be understood as applying GN to the periodic extension of f, which induces that

It is easy to see that (2/π)d≤ˆGN[\vectorsymξ]≤1 for \vectorsymξ∈FN, and we can hence define an operator QN that plays an essential role in our analysis:

We can show the following facts of QN:

From the definition of SN, it follows that QNf∈SN. Moreover, if f(\vectorsymx)=∑\vectorsymξ∈FNˆf[\vectorsymξ]exp(2πi\vectorsymξ⋅\vectorsymx), we have