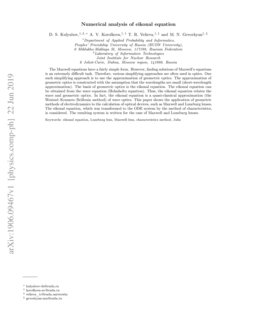 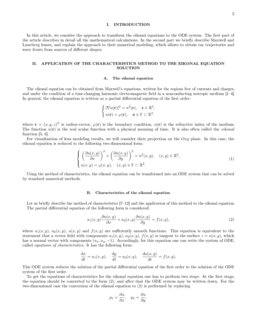 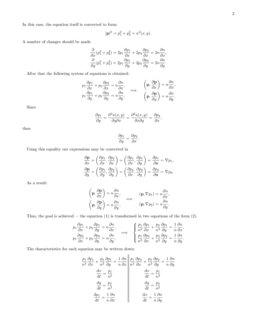 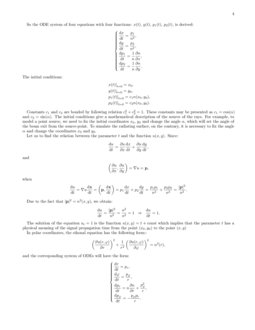 In this paper we develop a plane wave type method for discretization of ...
Qiya Hu, et al. ∙

Towards Accuracy and Scalability: Combining Isogeometric Analysis with Deflation to Obtain Scalable Convergence for the Helmholtz Equation

Uniform observability of the one-dimensional wave equation for non-cylindrical domains. Application to the control's support optimization

This work is concerned with the distributed controllability of the one-d...
Arthur Bottois, et al. ∙

In this paper, we study the numerical stabilization of a 1D system of tw...
Stéphane Gerbi, et al. ∙

In this article, we consider the approach to transform the eikonal equations to the ODE system. The first part of the article describes in detail all the mathematical calculations. In the second part we briefly describe Maxwell and Luneberg lenses, and explain the approach to their numerical modeling, which allows to obtain ray trajectories and wave fronts from sources of different shapes.

Ii Application of the characteristics method to the eikonal equation solution

The eikonal equation can be obtained from Maxwell’s equations, written for the regions free of currents and charges, and under the condition of a time-changing harmonic electromagnetic field in a nonconducting isotropic medium born-wolf:principles_optics::en; stratton:1948::en; ll:2::en; ll:8::en

. In general, the eikonal equation is written as a partial differential equation of the first order:

φ(r) is the boundary condition, n(r) is the refractive index of the medium. The function u(r) is the real scalar function with a physical meaning of time. It is also often called the eikonal function bruns:1895; klein:1901:eikonal.

For visualization of lens modeling results, we will consider their projection on the Oxy plane. In this case, the eikonal equation is reduced to the following two-dimensional form:

Using the method of characteristics, the eikonal equation can be transformed into an ODE system that can be solved by standard numerical methods.

ii.2 Characteristics of the eikonal equation

The partial differential equation of the following form is considered:

where a1(x,y), a2(x,y), u(x,y) and f(x,y) are sufficiently smooth functions. This equation is equivalent to the statement that a vector field with components a1(x,y), a2(x,y), f(x,y) is tangent to the surface z=u(x,y), which has a normal vector with components (ux,uy,−1). Accordingly, for this equation one can write the system of ODE, called equations of characteristics. It has the following form:

In this case, the equation itself is converted to form:

A number of changes should be made.

After that the following system of equations is obtained:

Using this equality our expressions may be converted in

Thus, the goal is achieved — the equation (1) is transformed in two equations of the form (2).

The characteristics for each equation may be written down:

Constants c1 and c2 are bonded by following relation c21+c22=1. These constants may be presented as c1=cos(α) and c2=sin(α). The initial conditions give a mathematical description of the source of the rays. For example, to model a point source, we need to fix the initial coordinates x0, y0 and change the angle α, which will set the angle of the beam exit from the source-point. To simulate the radiating surface, on the contrary, it is necessary to fix the angle α and change the coordinates x0 and y0.

Let us to find the relation between the parameter t and the function u(x,y). Since:

The solution of the equation ut=1 is the function u(x,y)=t+const which implies that the parameter t has a physical meaning of the signal propagation time from the point (x0,y0) to the point (x,y)

In polar coordinates, the eikonal equation has the following form::

and the corresponding system of ODEs will have the form:

Luneburg lens luneburg:1964; morgan:1958:luneberg_lens; lock:2008:luneburg_ray; lock:2008:luneburg_wave is a spherical lens of radius R with the center at point (X0,Y0) (consider the projection on the plane Oxy) with a refractive index of the following form

Outside the lens region derivatives are equal to 0.

Maxwell fish eye lens maxwell:1854:fish-eye is also a spherical lens of radius R with the center at point (X0,Y0) (consider the projection on the plane Oxy) with a refractive index of the following form:

iii.3 Description of the numerical modeling

Julia programming language joshi:book:learning-julia is used to simulate the trajectories of rays through the Maxwell and Luneburg lenses. We use classical Runge–Kutta methods with constant step to solve the ODE system.

To visualize the wave fronts with the resulting numerical data it is necessary to carry out additional recalculations. From each numerical solution, we must select points (xI,yI) that correspond to a specific point in time tI.

The use of a numerical method with a fixed step gives an advantage, since each numerical solution will be obtained for the same uniform grid t0<t1<…<ti<…<tn.

The paper presents the description of the numerical solution of the eikonal equation for the case of Luneburg and Maxwell lenses. The results are visualized as trajectories of rays passing through lenses and as fronts of electromagnetic waves.

The publication has been prepared with the support of the ‘‘RUDN University Program 5-100’’ and funded by Russian Foundation for Basic Research (RFBR) according to the research project No 19-01-00645.