Neural architecture search (NAS) is a promising method for automatically finding excellent architectures.Commonly used search strategies such as evolutionary algorithm, Bayesian optimization, and Predictor method employs a predictor to rank sampled architectures. In this paper, we propose two predictor based algorithms NPUBO and NPENAS for neural architecture search. Firstly we propose NPUBO which takes a neural predictor with uncertainty estimation as surrogate model for Bayesian optimization. Secondly we propose a simple and effective predictor guided evolution algorithm(NPENAS), which uses neural predictor to guide evolutionary algorithm to perform selection and mutation. Finally we analyse the architecture sampling pipeline and find that mostly used random sampling pipeline tends to generate architectures in a subspace of the real underlying search space. Our proposed methods can find architecture achieves high test accuracy which is comparable with recently proposed methods on NAS-Bench-101 and NAS-Bench-201 dataset using less training and evaluated samples. Code will be publicly available after finish all the experiments. 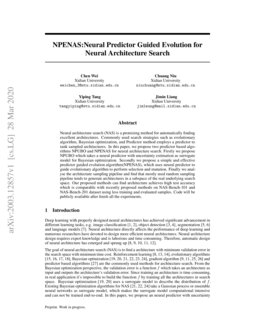 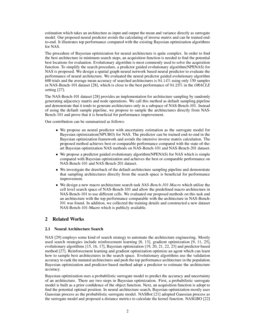 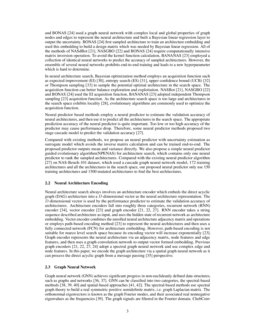 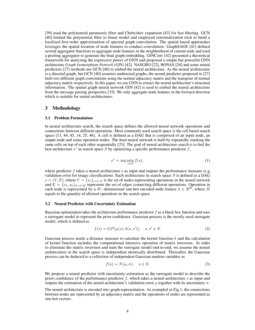 take a Gaussian process or ensemble neural networks as surrogate model, which makes the surrogate model computational intensive and can not be trained end-to-end. In this paper, we propose an neural predictor with uncertainty estimation which takes an architecture as input and output the mean and variance directly as surrogate model. Our proposed neural predictor avoids the calculating of inverse matrix and can be trained end-to-end. It illustrates top performance compared with the existing Bayesian optimization algorithms for NAS.

The procedure of Bayesian optimization for neural architecture is quite complex. In order to find the best architecture in minimum search steps, an acquisition function is needed to find the potential best locations for evaluation. Evolutionary algorithm is most commonly used to solve the acquisition function. To simplify the search procedure, a predictor guided evolutionary algorithm(NPENAS) for NAS is proposed. We design a spatial graph neural network based neural predictor to evaluate the performance of neural architecture. We evaluated the neural predictor guided evolutionary algorithm 600 trials and the average mean accuracy of searched architectures is 94.14% using only 150 samples in NAS-Bench-101 dataset [28], which is close to the best performance of 94.23% in the ORACLE setting [27].

Our contribution can be summarized as follows:

used a graph neural network with complex local and global properties of graph nodes and edges to represent the neural architecture and built a Bayesian linear regression layer to output the uncertainty. BONAS

[24] first sampled architecture to train an architecture embedding and used this embedding to build a design matrix which was needed by Bayesian linear regression. All of the methods of NASdBot [21], NASGBO [22] and BONAS [24] require computationally intensive matrix inversion operation. To avoid the kernel function calculation, BANANAS [23]

employed a collection of identical neural networks to predict the accuracy of sampled architectures. However, the ensemble of several neural networks prohibits end-to-end training and leads to a new hyperparameter which is hard to determine.

-dimensional vector as the neural architecture representation. The

D-dimensional vector is used by the performance predictor to estimate the validation accuracy of architectures. Architecture encoders fall into roughly three categories, recurrent network (RNN) encoder [34], vector encoder [23] and graph encoder [21, 22, 27]. RNN encoder takes a string sequence described architecture as input, and uses the hidden state of recurrent network as architecture embedding. Vector encoder combines the unrolled neural architecture adjacency matrix and operations or employs path-based encoding method [23] to represent the neural architectures and then uses a fully connected network (FCN) for architecture embedding. However, path-based encoding is not suitable for marco level search space because its encoding vector will increase exponentially [23]. Graph encoder represents the neural architecture via an adjacency matrix, node features and edge features, and then uses a graph convolution network to output vector formed embedding. Previous graph encoders [21, 22, 27, 24] adopt a spectral graph neural network and use complex edge and node features. In this paper, we encode the graph architecture via a spatial graph neural network as it can process the direct acyclic graph from a message passing [35] perspective.

. GNN can be classified into two categories, the spectral-based methods

. The spectral-based methods use spectral graph theory to build a real symmetric positive semidefinite matrix, i.e. graph Laplacian matrix. The orthonormal eigenvectors is known as the graph Fourier modes, and their associated real nonnegative eigenvalues as the frequencies

[39]. The graph signals are filtered in the Fourier domain. ChebConv [39] used the polynomial parametric filter and Chebyshev expansion [43] for fast filtering. GCN [40] limited the polynomial filter to linear model and employed renormalization trick to build a localized first-order approximation of spectral graph convolution. The spatial-based approaches leverages the spatial location of node features to conduct convolution. GraphSAGE [41] defined several aggregator functions to aggregate node features in the neighborhood of current node and used a pooling aggregator to generate the final graph embedding. GINConv [42] presented a theoretical framework for analyzing the expressive power of GNN and proposed a simple but powerful GNN architecture Graph Isomorphism Network (GIN) [42]. NASGBO [22], BONAS [24] and some neural predictors [27] methods use GCN [40] to embed the neural architecture. As the neural architecture is a directed graph, but GCN [40] assumes undirected graphs, the neural predictor proposed in [27] built two different graph convolutions using the normal adjacency matrix and the transpose of normal adjacency matrix respectively. In this paper, we use GNN to extract the neural architecture’s structural information. The spatial graph neural network GIN [42] is used to embed the neural architecture from the message passing perspective [35]. We only aggregate node features in the forward direction which is suitable for neural architectures.

where predictor f takes a neural architecture s as input and outputs the performance measure (e.g. validation error for image classification). Each architecture in search space S is defined as a DAG s=(V,E), where V={vi}i=1:N is the set of nodes representing operations in the neural network and E={rk,sk}k=1:M represents the set of edges connecting different operations. Operation in each node is represented by a H−

h∈RH, where H equals to the quantity of allowed operations in the search space.

Bayesian optimization takes the architecture performance predictor f as a black box function and uses a surrogate model to represent the prior confidence. Gaussian process is the mostly used surrogate model, which is defined as

and the calculation of kernel function includes the computational intensive operation of matrix inversion. In order to eliminate the matrix inversion and train the surrogate model end-to-end, we assume the neural architectures in the search space is independent identically distributed. Thereafter, the Gaussian process can be deduced to a collection of independent Gaussian random variables as

(MLPs) to iteratively update a node by aggregating features of its neighbors,

where hkv is the kth level feature of node v, ϵ(k) is a fixed scalar or learnable parameter, N(v) is the set of input nodes connected to v. The output of the final GIN is averaged over nodes by a global mean pool (GMP) layer to get the final embedding feature. The embed feature passes through several fully connect layers to generate the estimation of mean μ and variance σ of the validation error.

We use K randomly sampled neural architectures {s1,s2,⋯,sK} in the search space and their corresponding validation accuracy {y1,y2,⋯,yK} as the training dataset D={(si,yi),i=1,2,⋯,K} to train the neural predictor, which is denoted as G hereafter. Instead of sampling from a continuous performance predictor f, we sample discrete values of fdis

from the multinomial independent Gaussian distribution as

We use maximum likelihood estimate (MLE) loss to optimize the neural predictor. Denoting the parameters of G as w, the loss is defined as

As neural predictor with uncertainty estimation is taken as a surrogate model for Bayesian optimization, we denote this method as NPUBO. The complete procedure of NPUBO is shown in Algorithm.1.

(MSE) as loss function to train the neural predictor

G and the loss function is shown in Eqn.7. The parameters of neural predictor is denoted as w.

The neural predictor guided evolutionary algorithm is shown in Algorithm.2.

We gather commonly used information during architecture search, and build a dataset called NAS-Bench-101-Macro which is publicly available 111. This dataset contains the macro architecture’s structure information,training details,validation accuracy and testing accuracy. The items is shown in the following list:

In this section, we report the empirical performances of our proposed NPUBO and NPENAS. We first demonstrate superiority of our proposed neural predictors over existing method on correctly predict architecture’s validation error. Secondly, we evaluate the effectiveness of our proposed methods on closed and open domain search tasks. Finally, we conduct some transfer learning analysis and ablation studies.

adopts path-based encoding or unrolled adjacency matrix with concatenated one-hot encoded operation vector as architecture representation. The training set size is 20, 100 and 500. We use 5 ensemble meta neural network and each neural network has 10 layers and each layer has width 20. Each meta neural network is trained for 200 epochs the full details can found in BANANAS

91.52% mean test accuracy and the architecture with highest validation accuracy has a mean test accuracy of 91.08%. We use the same experiment settings as BANANAS [23]. Each algorithm is given a budget of 150 queries. Every 10 iterations, each algorithm returns the architecture with the lowest validation error so far and its corresponding test accuracy is reported, so there are 15 best architectures in total. We run 600 trials for each algorithms and report the averaged results. If using above experiment setting NAO [34] and Neural Predictor [27] will have poor performance, so we compare the searched best architecture’s mean testing accuracy of our proposed algorithms with NAO and Neural Predictor. To demonstrate the effective of our proposed methods, we compare our approaches with the following algorithms.

Results of comparison on NAS-Bench-101 is shown in Fig.8. As illustrated in Fig.8 our proposed NPUBO and NPENAS is better than other algorithms and NPENAS achieves the best performance. Fig.7(b) is the comparison of algorithms using new sampling pipeline. From Fig.7(b) we find our proposed NPENAS have the best performance and the vanilla unrolled adjacency matrix concatenate one-hot encoded vector is better than path-based encoding which against the results in BANANAS [23]. As the new sampling pipeline can adequately explore the search space, algorithms using this pipeline have low variance and perform slightly better than using default sampling pipeline. Our proposed NPUBO performs slightly better than BANANAS [23] with path-based encoding which also uses bayesian optimization, and our proposed NPENAS using 150 training samples can get mean test accuracy of 94.14% averaged over 600 trials. In ORACLE setting [27] the best mean accuracy is 94.23% on NAS-Bench-101 dataset.

Results of comparison on NAS-Bench-201 is shown in Fig.7(c). As there are only 15.6k architectures in NAS-Bench-201 which is relatively small, algorithms can find a good architecture using less training samples compared with NAS-Bench-101. Our proposed methods NPUBO and NPENAS is better than other algorithms and NPUBO achieves the best performance.

From Table 2 we find on NAS-Bench-101 and NAS-Bench-201 CNPNAS [27] achieves the best testing accuracy, but this method adopts a two stage GCN and have to evaluate all the architectures in search space. Our proposed methods NPUBO and NPENAS have comparable performance with CNPNAS [27] using less training and evaluated samples.