Making predictions of future frames is a critical challenge in autonomous driving research. Most of the existing methods for video prediction attempt to generate future frames in simple and fixed scenes. In this paper, we propose a novel and effective optical flow conditioned method for the task of video prediction with an application to complex urban scenes. In contrast with previous work, the prediction model only requires video sequences and optical flow sequences for training and testing. Our method uses the rich spatial-temporal features in video sequences. The method takes advantage of the motion information extracting from optical flow maps between neighbor images as well as previous images. Empirical evaluations on the KITTI dataset and the Cityscapes dataset demonstrate the effectiveness of our method. 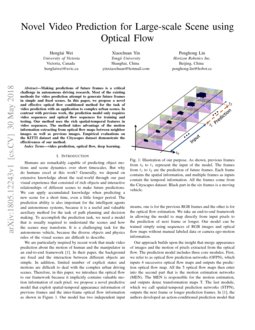 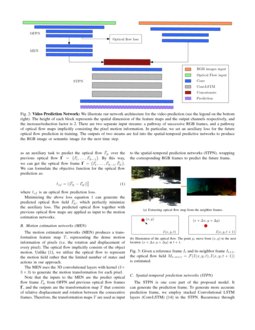 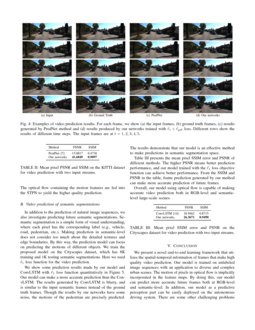 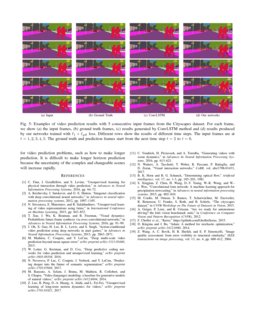 Humans are remarkably capable of predicting object motions and scene dynamics over short timescales. But why do humans excel at this work? Generally, we depend on extensive knowledge about the real-world through our past visual experience that consisted of rich objects and interactive relationships of different scenes to make future predictions. We can apply accumulated knowledge when predicting a new scene for a short time, even a little longer period. The prediction ability is also important for the intelligent agents and autonomous systems, because it is a useful and valuable auxiliary method for the task of path planning and decision making. To accomplish the prediction task, we need a model that is usually required to understand the scenes and how the scenes may transform. It is a challenging task for the autonomous vehicle, because the diverse objects and physics rules of the visual scenes are difficult to describe.

We are particularly inspired by recent work that made video prediction about the motion of human and the manipulator in an end-to-end framework [1]. In their paper, the background are fixed and the interaction between different objects are simple. In addition, limited number of explicit states and motions are difficult to deal with the complex urban driving scenes. Therefore, in this paper, we introduce the optical flow to our framework because it implicitly contains valuable motion information of each pixel. we propose a novel predictive model that exploit spatial-temporal appearance information of previous frames and the inter-frame optical flow information as shown in Figure 1

. Our model has two independent input steams, one is for the previous RGB frames and the other is for the optical flow estimation. We take an end-to-end framework in allowing the model to map directly from input pixels to the prediction of next frame or longer. Our model can be trained simply using sequences of RGB images and optical flow maps without manual labeled data or camera ego-motion information.

, the authors developed an action-conditioned prediction model that explicitly models pixel motion. While limited number of explicit motion could produce some reasonable video prediction for certain types of scenes (e.g., static background scene), the same model would fail miserably when presented with another set of scenes with more diverse appearance and complex interaction between objects. Thus, we aim to formulate the optical flow motion estimation as the supplementary information for the video prediction neural networks. Experiments demonstrate that our method significantly outperforms prior methods on prediction across diverse and complex visual scenes.

The main contributions of our paper are summarized as follows:

Scenes of Video Prediction : Motivated by the great success of deep learning in machine vision (e.g., image classification and object recognition) [2]. Recently some models using the deep learning approaches have been proposed to tackle the problem of video prediction under different scenes. Early work about video prediction focused on low resolution video clips or images containing simple predictable content without any background such as the moving digit [3, 4] and Atari Game prediction [5]. Higher resolution natural scenes with static background are more complicated but promising. [6] proposed different models to predict the actions, poses or paths of human. [1] built a model to make prediction of the robot arms. Generally these training images have static background, and visual representations are not that complex. There are some real-world videos that contain not only the moving targets but also the dynamic background such as the urban traffic scenes. [7] predicted realistic looking frames, and [8] only predicted future semantic segmentations rather than natural frames. In contrast to these work, our model can predict complicated real-world scenes (e.g., urban scenes). At the same time, we also verify our model to predict the semantic segmentations.

Methods of Video Prediction : There have been a number of promising approaches for the task of video prediction. [9]

introduced a generative model that used the recurrent neural network (RNN) to predict the next frame.

[10] presented an unsupervised representation learning approach to predict long-term 3D motions. [11] proposed a generative adversarial network (GAN) for video prediction with a convolutional architecture that untangles the foreground of scenes from the background. [1] developed an action-conditioned video prediction model by predicting a distribution over pixels. In a similar spirit, [12]

introduced a Convolution neural networks (CNN) for learning the dynamics of a physical system from raw visual observations. This work highlighted the importance of using the dynamics of the system. In contrast to the traditional deterministic method,

[4] proposed a probabilistic method for the frame prediction to solve the uncertainty problem.

In this section, we introduce our framework for video prediction as shown in Figure 2. Our ultimate goal is to make accurate prediction of future frames in complex and real-world scenes. Given RGB frames observed at time steps t0,t1,…,tn and corresponding optical flow maps extracted from neighbor frames, our model takes advantage of the history information of frames to predict the future frames. In addition, our model is able to jointly train optical flow prediction and video prediction.

Optical flow is a vector field, having the same size as the RGB frames, with 2D flow vector per pixel

[13]. Optical flow represents the apparent displacements of pixels in x and y directions due to the relative motion between consecutive frames see Figure 3(b). Acquiring optical flow field needs precise per-pixel localization, and also requires finding correspondences between a pair of input RGB frames (e.g.,It and It+1) shown in Figure 3(a).

where ℓof is an optical flow prediction loss.

The motion estimation networks (MEN) produces a transformation feature map T, representing the dense motion information of pixels (i.e. the rotation and displacement of every pixel). The optical flow implicitly consists of the object motion. Unlike [1], we utilize the optical flow to represent the motion field rather that the limited number of states and actions in our approach.

The MEN uses the 3D convolutional layers with kernel (3×3×3) to generate the motion transformation for each pixel.

Note that the inputs to the MEN are the predict optical flow frame ^I′N from OFPN and previous optical flow frames I′, and the outputs are the transformation map T that consists of relative displacement and rotation between the consecutive frames. Therefore, the transformation maps T are used as input to the spatial-temporal prediction networks (STPN), wrapping the corresponding RGB frames to predict the future frame.

The STPN is one core part of the proposed model. It can generate the prediction frame. To generate more accurate prediction frame, we employ stacked Convolutional LSTM layers (ConvLSTM) [14] in the STPN. Recurrence through convolutions is good at multi-step video prediction because it utilizes the spatial invariance of image, as well as the temporal information between the neighbor frames.

More formally, the transformation T applied to the current frame It produces the next predict frame ^It+1. Let (xt,yt) denote the homogeneous coordinates of pixels in the current image and (^xt+1,^yt+1) in the next image.

Training the STPN comes down to minimizing the prediction error between the predict frame ^IN and the ground truth frame IN. Inspired by [6], the ℓ1+ℓgdl loss is used in the STPN,

where ℓgdl is the gradient difference loss, defined as

where α=1, and |⋅| denotes the absolute value function. ^I and I denote ^IN and IN respectively.

where λof and λst are the weighting for the optical flow loss and prediction networks respectively. When training the model we choose λof=λst=1.

[14] as backbone model of the spatial-temporal prediction networks. This architecture captures spatial-temporal correlations very well. The detailed specifications of the three parts are shown in Table I.

In this section, we evaluate the performance of our model and make comparison with previous approaches of video prediction. We evaluate our system on the Cityscapes dataset [15] as well as on the KITTI dataset [16].

We implemented the model by using the Tensorflow and Keras

[17]. For all the experiments, we used batch normalization for all the layers except the output layers, and the Adam [18] optimizer with the suggested super parameters (learning rate lr=0.001,β1=0.9,β2=0.999). Our systems are trained and deployed on a NVIDIA TITAN X GPU with 12GB memory. During training and testing stage, we resize the image sequences of the KITTI dataset to 128×384 and images of the Cityscapes dataset to 256×512. Our networks are trained in an end-to-end way.

In our first set of experiments, we train our system on real-world sequences from the KITTI dataset, with about 20K frames in total. No other data augmentation is used. The dataset has 18K and 2K images for training and testing respectively. Training and testing sequences are given in the form of tuple (I,I′,^I), where I are the input raw RGB frames, I′ are the optical flow maps input and ^I is the predicted frame. We train our model using a frame rate of 1, and taking 5 consecutive RGB frames and 4 corresponding optical flow maps as the input. That is, we pass in initial RGB natural sequences i.e., I={It−4,It−3,It−2,It−1,It}, as well as the corresponding optical flow maps include I′={I′t−4,I′t−3,I′t−2,I′t−1}, then roll out the model sequentially, passing in the motion predictions from the previous optical flow maps.

To evaluate the quality of the video prediction generating from different models, we compute the Peak Signal to Noise Ratio (PSNR) and the Structural Similarity Index Measures (SSIM) between the true frame IN and the predict frame ^IN [19]. The SSIM ranges from −1 to 1, and larger score represents better prediction performance. In table 1, we presents the quantitative comparisons among different methods. We can clearly see the advantage of our method over other methods. The optical flow containing the motion features are fed into the STPN to yield the higher quality prediction.

We show some prediction results made by our model and ConvLSTM with ℓ1 loss function quantitatively in Figure 5. Our model can make a more accurate prediction than the ConvLSTM. The results generated by ConvLSTM is blurry, and is similar to the input semantic frames instead of the ground truth frames. Though the results by our networks have some noise, the motions of the pedestrian are precisely predicted. The results demonstrate that our model is an effective method to make predictions in semantic segmentation space.

Table III presents the mean pixel SSIM error and PSNR of different methods. The higher PSNR means better prediction performance, and our model trained with the ℓ1 loss objective function can achieve better performance. From the SSIM and PSNR in the table, frame prediction generated by our method can make more accurate prediction of future frames.

Overall, our model using optical flow is capable of making accurate video prediction both in RGB-level and semantic-level large-scale scenes.

We present a novel end-to-end learning framework that utilizes the spatial-temporal information of frames that make high quality video prediction. Our model is trained on unlabeled image sequences with an application to diverse and complex urban scenes. The motion of pixels in optical flow is implicitly incorporated in the feature maps. By doing this, our model can predict more accurate future frames both at RGB-level and semantic-level. In addition, our model as a predictive perception part can be easily deployed on the autonomous driving system. There are some other challenging problems for video prediction problems, such as how to make longer prediction. It is difficult to make longer horizon prediction because the uncertainty of the complex and changeable scenes will increase rapidly.