Notes on Tree- and Path-chromatic Number 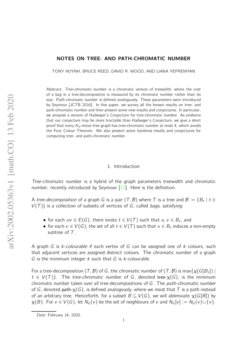 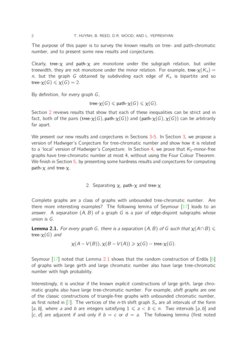 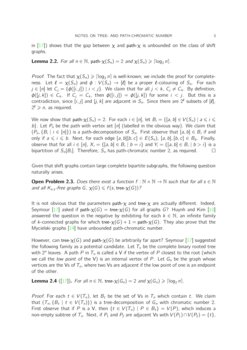 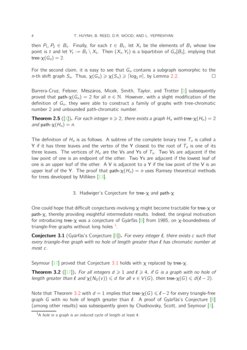 Asymptotic Equivalence of Hadwiger's Conjecture and its Odd Minor-Variant

A short proof of the middle levels theorem

Consider the graph that has as vertices all bitstrings of length 2n+1 wi...
Petr Gregor, et al. ∙

Consider the task of performing a sequence of searches in a binary searc...
Caleb C. Levy, et al. ∙

Tree-chromatic number is a hybrid of the graph parameters treewidth and chromatic number, recently introduced by Seymour [17]. Here is the definition.

A tree-decomposition of a graph G is a pair (T,B) where T is a tree and B:={Bt∣t∈V(T)} is a collection of subsets of vertices of G, called bags, satisfying:

The purpose of this paper is to survey the known results on tree- and path-chromatic number, and to present some new results and conjectures.

Clearly, tree-χ and path-χ are monotone under the subgraph relation, but unlike treewidth, they are not monotone under the minor relation. For example, tree-χ(Kn)=n, but the graph G obtained by subdividing each edge of Kn is bipartite and so tree-χ(G)⩽χ(G)=2.

By definition, for every graph G,

Section 2 reviews results that show that each of these inequalities can be strict and in fact, both of the pairs (tree-χ(G),path-χ(G)) and (path-χ(G),χ(G)) can be arbitrarily far apart.

We present our new results and conjectures in Sections 3-5. In Section 3, we propose a version of Hadwiger’s Conjecture for tree-chromatic number and show how it is related to a ‘local’ version of Hadwiger’s Conjecture. In Section 4, we prove that K5-minor-free graphs have tree-chromatic number at most 4, without using the Four Colour Theorem. We finish in Section 5, by presenting some hardness results and conjectures for computing path-χ and tree-χ.

Complete graphs are a class of graphs with unbounded tree-chromatic number. Are there more interesting examples? The following lemma of Seymour [17] leads to an answer. A separation (A,B) of a graph G is a pair of edge-disjoint subgraphs whose union is G.

For every graph G, there is a separation (A,B) of G such that χ(A∩B)⩽tree-χ(G) and

Interestingly, it is unclear if the known explicit constructions of large girth, large chromatic graphs also have large tree-chromatic number. For example, shift graphs are one of the classic constructions of triangle-free graphs with unbounded chromatic number, as first noted in [7]. The vertices of the n-th shift graph Sn are all intervals of the form [a,b], where a and b are integers satisfying 1⩽a<b⩽n. Two intervals [a,b] and [c,d] are adjacent if and only if b=c or d=a. The following lemma (first noted in [17]) shows that the gap between χ and path-χ is unbounded on the class of shift graphs.

It is not obvious that the parameters path-χ and tree-χ are actually different. Indeed, Seymour [17] asked if path-χ(G)=tree-χ(G) for all graphs G? Huynh and Kim [10] answered the question in the negative by exhibiting for each k∈N, an infinite family of k-connected graphs for which tree-χ(G)+1=path-χ(G). They also prove that the Mycielski graphs [14] have unbounded path-chromatic number.

However, can tree-χ(G) and path-χ(G) be arbitrarily far apart? Seymour [17] suggested the following family as a potential candidate. Let Tn be the complete binary rooted tree with 2n leaves. A path P in Tn is called a V if the vertex of P closest to the root (which we call the low point of the V) is an internal vertex of P. Let Gn be the graph whose vertices are the Vs of Tn, where two Vs are adjacent if the low point of one is an endpoint of the other.

For the second claim, it is easy to see that Gn contains a subgraph isomorphic to the n-th shift graph Sn. Thus, χ(Gn)⩾χ(Sn)⩾⌈log2n⌉, by Lemma 2. ∎

Barrera-Cruz, Felsner, Mészáros, Micek, Smith, Taylor, and Trotter [1] subsequently proved that path-χ(Gn)=2 for all n∈N. However, with a slight modification of the definition of Gn, they were able to construct a family of graphs with tree-chromatic number 2 and unbounded path-chromatic number.

The definition of Hn is as follows. A subtree of the complete binary tree Tn is called a Y if it has three leaves and the vertex of the Y closest to the root of Tn is one of its three leaves. The vertices of Hn are the Vs and Ys of Tn. Two Vs are adjacent if the low point of one is an endpoint of the other. Two Ys are adjacent if the lowest leaf of one is an upper leaf of the other. A V is adjacent to a Y if the low point of the V is an upper leaf of the Y. The proof that path-χ(Hn)=n uses Ramsey theoretical methods for trees developed by Milliken [13].

One could hope that difficult conjectures involving χ might become tractable for tree-χ or path-χ, thereby providing insightful intermediate results. Indeed, the original motivation for introducing tree-χ was a conjecture of Gyárfás [8] from 1985, on χ-boundedness of triangle-free graphs without long holes 111A hole in a graph is an induced cycle of length at least 4..

For every integer ℓ, there exists c such that every triangle-free graph with no hole of length greater than ℓ has chromatic number at most c.

Seymour [17] proved that Conjecture 3 holds with χ replaced by tree-χ.

Note that Theorem 3.1 with d=1 implies that tree-χ(G)⩽ℓ−2 for every triangle-free graph G with no hole of length greater than ℓ. A proof of Gyárfás’s Conjecture [8] (among other results) was subsequently given by Chudnovsky, Scott, and Seymour [3].

The following is another famous conjectured upper bound on χ, due to Hadwiger [9]; see [16] for a survey.

We propose the following weakenings of Hadwiger’s Conjecture.

Conjectures 3 and 3 are also related to a ‘local’ version of Hadwiger’s Conjecture via the following lemma.

Let ℓ be a leaf of T and u be the unique neighbour of ℓ in T. If Bℓ⊆Bu, then T−ℓ contradicts the minimality of T. Therefore, there is a vertex v∈Bℓ such that v∉Bt for all t≠ℓ. It follows that NG[v]⊆Bℓ, as required. ∎

Proof of equivalence to Hadwiger’s Conjecture.

Clearly, Hadwiger’s Conjecture implies Conjecture 3. For the converse, let G be a graph without a Kt+1-minor. Let G+ be the graph obtained from G by adding a new vertex v adjacent to all vertices of G. Since G+ has no Kt+2-minor, Conjecture 3 yields χ(NG+[v])⩽t+1. Since χ(NG+[v])=χ(G)+1, we have χ(G)⩽t, as required. ∎

As evidence that Conjecture 3 may be more tractable than Hadwiger’s Conjecture, we now prove it for K5-minor-free graphs without using the Four Colour Theorem. We begin with the planar case.

For every planar graph G, tree-χ(G)⩽4.

We use the same tree-decomposition previously used by Eppstein [5] and Dujmović, Morin, and Wood [4].

Say G has n vertices. We may assume that n⩾3 and that G is a plane triangulation. Let F(G) be the set of faces of G. By Euler’s formula, |F(G)|=2n−4 and |E(G)|=3n−6. Let r be a vertex of G. Let (V0,V1,…,Vt) be the bfs layering of G starting from r. Let T be a bfs tree of G rooted at r. Let T∗ be the subgraph of the dual G∗ with vertex set F(G), where two vertices are adjacent if the corresponding faces share an edge not in T. Thus

By the Jordan Curve Theorem, T∗ is connected. Thus T∗ is a tree.

The remaining case is |ϕk−1|=3. In this case, ϕ extends to a 4-colouring of Gk, unless there exist distinct vertices a,b∈Wk−1 such that a and b are both adjacent to all vertices of Wk. Again we obtain a K5-minor in G[Cu] by using T to contract Wk onto {x,y,z} and contracting all but one edge of the a–b path in T. ∎

We finish the proof by using Wagner’s characterization of K5-minor-free graphs [19], which we now describe. Let G1 and G2 be two graphs with V(G1)∩V(G2)=K, where K is a clique of size k in both G1 and G2. The k-sum of G1 and G2 (along K) is the graph obtained by gluing G1 and G2 together along K (and keeping all edges of K). The Wagner graph V8 is the graph obtained from an 8-cycle by adding an edge between each pair of antipodal vertices.

Every edge-maximal K5-minor-free graph can be obtained from 1-, 2-, and 3-sums of planar graphs and V8.

We finish by showing some hardness results for computing tree-χ and path-χ. We need some preliminary results. For a graph G, let KGt be the graph consisting of t disjoint copies of G and all edges between distinct copies of G.

For all t∈N and all graphs G without isolated vertices,

Let (T,{Bt∣t∈V(T)}) be a tree-χ-optimal tree-decomposition of K:=KGt, with |V(T)| minimal. By Lemma 3, there exists ℓ∈V(T) and v∈V(K) such that NK[v]⊆Bℓ. Since G has no isolated vertices, v has a neighbour in the same copy of G in which it belongs. Therefore,

For the other inequalities, tree-χ(K)⩽path-χ(K)⩽χ(K)=tχ(G). ∎

We also require the following hardness result of Lund and Yannakakis [12].

There exists ϵ>0, such that it is NP-hard to correctly determine χ(G) within a multiplicative factor of nϵ for every n-vertex graph G.

Our first theorem is a hardness result for approximating tree-χ and path-χ.

There exists ϵ′>0, such that it is NP-hard to correctly determine tree-χ(G) within a multiplicative factor of nϵ′ for every n-vertex graph G. The same hardness result holds for path-χ with the same ϵ′.

We show the proof for tree-χ. The proof for path-χ is identical. Let ϵ′=ϵ3, where ϵ is the constant from Theorem 5.1. Let G be an n-vertex graph.

For the decision problem, we use the following hardness result of Khanna, Linial, and Safra [11].

As a corollary of Theorem 5.3, we obtain the following.

Finally, unlike for χ(G), we conjecture that it is still NP-complete to decide if tree-χ(G)⩽2.