We present a row reduction algorithm to compute the barcode decomposition of persistence modules. This algorithm dualises the standard persistence one and clarifies the symmetry between clear and compress optimisations. 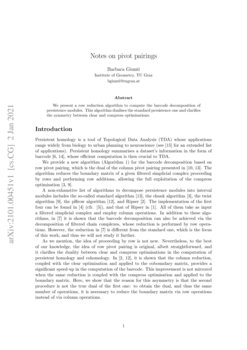 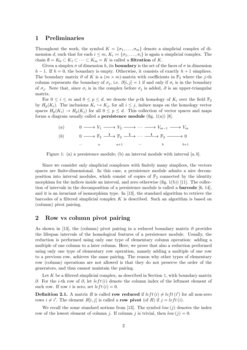 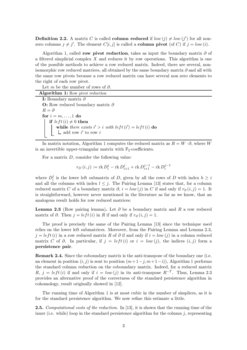 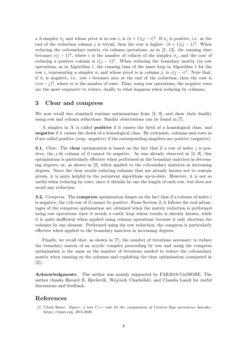 The notion of persistence partial matching, as a generalization of parti...
R. Gonzalez-Diaz, et al. ∙

On the Persistence of Persistent Identifiers of the Scholarly Web

Scholarly resources, just like any other resources on the web, are subje...
Martin Klein, et al. ∙

On Association between Absolute and Relative Zigzag Persistence

A fundamental building block of a mobile application is the ability to p...
Zheng "Jason'' Song, et al. ∙

Persistent homology is a tool of Topological Data Analysis (TDA) whose applications range widely from biology to urban planning to neuroscience (see [15] for an extended list of applications). Persistent homology summarises a dataset’s information in the form of barcode [6, 14], whose efficient computation is then crucial to TDA.

We provide a new algorithm (Algorithm 1) for the barcode decomposition based on row pivot pairing, which is the dual of the column pivot pairing presented in [10, 13]. The algorithm reduces the boundary matrix of a given filtered simplicial complex proceeding by rows and performing row additions, allowing the full exploitation of the compress optimisation [3, 9].

A non-exhaustive list of algorithms to decompose persistence modules into interval modules includes the so-called standard algorithm [13], the chunk algorithm [3], the twist algorithm [9], the pHrow algorithm [12], and Ripser [2]. The implementation of the first four can be found in [4] (cfr. [5]), and that of Ripser in [1]. All of them take as input a filtered simplicial complex and employ column operations. In addition to these algorithms, in [7] it is shown that the barcode decomposition can also be achieved via the decomposition of filtered chain complexes, whose reduction is performed by row operations. However, the reduction in [7] is different from the standard one, which is the focus of this work, and thus we will not study it further.

As we mention, the idea of proceeding by row is not new. Nevertheless, to the best of our knowledge, the idea of row pivot pairing is original, albeit straightforward, and it clarifies the duality between clear and compress optimisations in the computation of persistent homology and cohomology. In [2, 12], it is shown that the column reduction, coupled with the clear optimisation and applied to the coboundary matrix, provides a significant speed-up in the computation of the barcode. This improvement is not mirrored when the same reduction is coupled with the compress optimisation and applied to the boundary matrix. Here, we show that the reason for this asymmetry is that the second procedure is not the true dual of the first one: to obtain the dual, and thus the same number of operations, it is necessary to reduce the boundary matrix via row operations instead of via column operations.

Hp(Ki)→Hp(Kj) for all 0≤p≤d. This collection of vector spaces and maps forms a diagram usually called a persistence module (fig. 1(a)) [8].

Since we consider only simplicial complexes with finitely many simplices, the vectors spaces are finite-dimensional. In this case, a persistence module admits a nice decomposition into interval modules, which consist of copies of F2 connected by the identity morphism for the indices inside an interval, and zero otherwise (fig. 1(b)) [11]. The collection of intervals in the decomposition of a persistence module is called a barcode [6, 14], and it is an invariant of isomorphism type. In [13], the standard algorithm to retrieve the barcodes of a filtered simplicial complex K is described. Such an algorithm is based on (column) pivot pairing.

As shown in [13], the (column) pivot pairing in a reduced boundary matrix ∂ provides the lifespan intervals of the homological features of a persistence module. Usually, the reduction is performed using only one type of elementary column operation: adding a multiple of one column to a later column. Here, we prove that also a reduction performed using only one type of elementary row operation, namely adding a multiple of one row to a previous row, achieves the same pairing. The reason why other types of elementary row (column) operations are not allowed is that they do not preserve the order of the generators, and thus cannot maintain the pairing.

Let K be a filtered simplicial complex, as described in Section 1, with boundary matrix ∂. For the i-th row of ∂, let left(i) denote the column index of the leftmost element of such row. If row i is zero, set left(i)=0.

A matrix R is called row reduced if left(i)≠left(i′) for all non-zero rows i≠i′. The element R[i,j] is called a row pivot (of R) if j=left(i).

We recall the some standard notions from [13]. The symbol low(j) denotes the index row of the lowest element of column j. If column j is trivial, then low(j)=0.

A matrix C is called column reduced if low(j)≠low(j′) for all non-zero columns j≠j′. The element C[i,j] is called a column pivot (of C) if j=low(i).

Let m be the number of rows of ∂.

In matrix notation, Algorithm 1 computes the reduced matrix as R=W⋅∂, where W is an invertible upper-triangular matrix with F2-coefficients.

For a matrix D, consider the following value:

where Dji is the lower left submatrix of D, given by all the rows of D with index h≥i and all the columns with index l≤j. The Pairing Lemma [13] states that, for a column reduced matrix C of a boundary matrix ∂, i=low(j) in C if and only if r∂(i,j)=1. It is straightforward, however never mentioned in the literature as far as we know, that an analogous result holds for row reduced matrices:

Since the coboundary matrix is the anti-transpose of the boundary one (i.e. an element in position (i,j) is sent to position (m+1−j,m+1−i)), Algorithm 1 performs the standard column reduction on the coboundary matrix. Indeed, for a reduced matrix R, j=left(i) if and only if i=low(j) in its anti-transpose R−T. Thus, Lemma 2.3 provides an alternative proof of the correctness of the standard persistence algorithm in cohomology, result originally showed in [12].

The running time of Algorithm 1

is at most cubic in the number of simplices, as it is for the standard persistence algorithm. We now refine this estimate a little.

Computational costs of the reduction. In [13], it is shown that the running time of the inner (i.e. while) loop in the standard persistence algorithm for the column j, representing a h-simplex σj and whose pivot is in row i, is (h+1)(j−i)2. If σj is positive, i.e. at the end of the reduction column j is trivial, then the cost is higher: (h+1)(j−1)2. When reducing the coboundary matrix via column operations, as in [2, 12], the running time becomes c(j−1)2, where c is the number of cofaces of the simplex σj, and the cost of reducing a positive column is c(j−1)2. When reducing the boundary matrix via row operations, as in Algorithm 1, the running time of the inner loop in Algorithm 1 for the row i, representing a simplex σi and whose pivot is in column j, is c(j−i)2. Note that, if σi is negative, i.e. row i becomes zero at the end of the reduction, then the cost is c(m−j)2, where m is the number of rows. Thus, using row operations, the negative rows are the more expensive to reduce, dually to what happens when reducing by columns.

We now recall two standard runtime optimisations from [3, 9], and show their duality using row and column reductions. Similar observations can be found in [7].

Clear. The clear optimisation is based on the fact that if a row of index j is positive, the j-th column of ∂ cannot be negative. As was already observed in [3, 9], this optimisation is particularly effective when performed on the boundary matrices in decreasing degrees, or, as shown in [2], when applied to the coboundary matrices in increasing degrees. Since the clear avoids reducing columns that are already known not to contain pivots, it is quite helpful in the persistent algorithms up-to-date. However, it is not so useful when reducing by rows, since it shrinks by one the length of each row, but does not avoid any reduction.

Compress. The compress optimisation hinges on the fact that if a column of index i is negative, the i-th row of ∂ cannot be positive. From Section 2, it follows the real advantages of the compress optimisation are obtained when the matrix reduction is performed using row operations since it avoids a costly loop whose results is already known, while it is quite inefficient when applied using column operations because it only shortens the columns by one element. Performed using the row reduction, the compress is particularly effective when applied to the boundary matrices in increasing degrees.

The author was mainly supported by FAR2019-UniMORE. The author thanks Håvard B. Bjerkevik, Wojciech Chachólski, and Claudia Landi for useful discussions and feedback.