Tang derived the exact power formulae for t tests and analysis of covariance (ANCOVA) in superiority, noninferiority and equivalence trials. The power calculation in equivalence trials can be simplified by using Owen's Q function, which is available in standard statistical software. We extend the exact power determination method for ANCOVA to unstratified and stratified multi-arm randomized trials. The method is applied to the design of multi-arm trials and gold standard noninferiority trials. 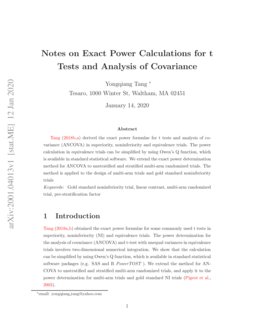 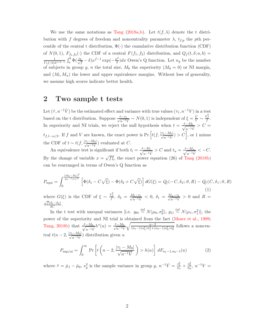 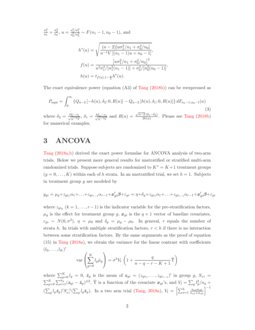 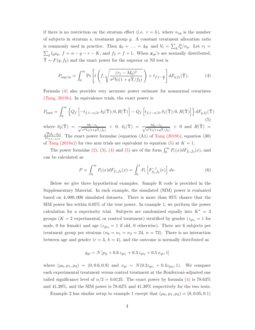 obtained the exact power formulae for some commonly used t tests in superiority, noninferiority (NI) and equivalence trials. The power determination for the analysis of covariance (ANCOVA) and t-test with unequal variances in equivalence trials involves two-dimensional numerical integration. We show that the calculation can be simplified by using Owen’s Q function, which is available in standard statistical software packages (e.g. SAS and R

PowerTOST ). We extend the method for ANCOVA to unstratified and stratified multi-arm randomized trials, and apply it to the power determination for multi-arm trials and gold standard NI trials (Pigeot et al., 2003).

We use the same notations as Tang (2018a, b). Let t(f,λ) denote the t distribution with fdegrees of freedom and noncentrality parameter λ, tf,p the pth percentile of the central t distribution, Φ(⋅)

the cumulative distribution function (CDF) of

be the estimated effect and variance with true values

. In superiority and NI trials, we reject the null hypothesis when

Tang (2018a, b) derived the exact power formulae for ANCOVA analysis of two-arm trials. Below we present more general results for unstratified or stratified multi-arm randomized trials. Suppose subjects are randomized to K∗=K+1 treatment groups (g=0,…,K) within each of h strata. In an unstratified trial, we set h=1. Subjects in treatment group g are modeled by

where zgik (k=1,…,r−1) is the indicator variable for the pre-stratification factors, μg is the effect for treatment group g, xgi is the q×1vector of baseline covariates, εgi∼N(0,σ2), η=μ0 and δg=μg−μ0. In general, r equals the number of strata h. In trials with multiple stratification factors, r<h if there is no interaction between some stratification factors. By the same arguments as the proof of equation (15) in Tang (2018a), we obtain the variance for the linear contrast with coefficients (l0,…,lK)′

~Υ∼F(q,f2) and the exact power for the superior or NI test is

Below we give three hypothetical examples. Sample R code is provided in the Supplementary Material. In each example, the simulated (SIM) power is evaluated based on 4,000,000 simulated datasets. There is more than 95% chance that the SIM power lies within 0.05% of the true power. In example 1, we perform the power calculation for a superiority trial. Subjects are randomized equally into K∗=3 groups (K=2 experimental, or control treatment) stratified by gender (zgi1=1 for male, 0 for female) and age (zgi2=1 if old, 0 otherwise). There are 6 subjects per treatment group per stratum (n0=n1=n2=24, n=72). There is no interaction between age and gender (r=3, h=4), and the outcome is normally distributed as