Note on "The Complexity of Counting Surjective Homomorphisms and Compactions"

Focke, Goldberg, and Živný (arXiv 2017) prove a complexity dichotomy for the problem of counting surjective homomorphisms from a large input graph G without loops to a fixed graph H that may have loops. In this note, we give a short proof of a weaker result: Namely, we only prove the #P-hardness of the more general problem in which G may have loops. Our proof is an application of a powerful framework of Lovász (2012), and it is analogous to proofs of Curticapean, Dell, and Marx (STOC 2017) who studied the "dual" problem in which the pattern graph G is small and the host graph H is the input. Independently, Chen (arXiv 2017) used Lovász's framework to prove a complexity dichotomy for counting surjective homomorphisms to fixed finite structures. 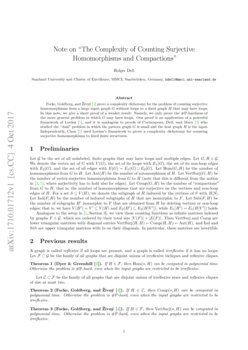 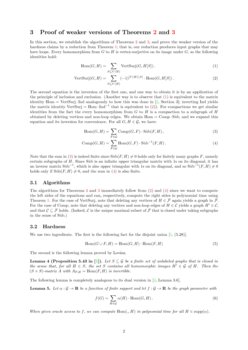 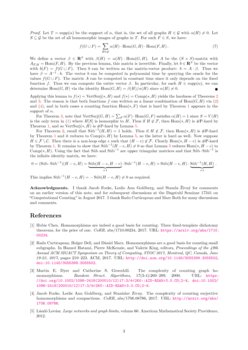 Counting graph homomorphisms and its generalizations such as the Countin...
Andrei A. Bulatov, et al. ∙

A short note on the counting complexity of conjunctive queries

This note closes a minor gap in the literature on the counting complexit...
Stefan Mengel, et al. ∙

Homomorphisms are indeed a good basis for counting: Three fixed-template dichotomy theorems, for the price of one

Many natural combinatorial quantities can be expressed by counting the n...
Hubie Chen, et al. ∙

A short proof of the non-biplanarity of K_9

We consider the problem of counting the number of copies of a fixed grap...
Lior Gishboliner, et al. ∙

If H∈F, then Hom(∗,H) can be computed in polynomial time. Otherwise the problem is #P-hard, even when the input graphs are restricted to be irreflexive. ■

Let C⊂F be the family of all graphs that are disjoint unions of irreflexive stars and reflexive cliques of size at most two.

If H∈C, then Comp(∗,H) can be computed in polynomial time. Otherwise the problem is #P-hard, even when the input graphs are restricted to be irreflexive. ■

If H∈F, then VertSurj(∗,H) can be computed in polynomial time. Otherwise the problem is #P-hard, even when the input graphs are restricted to be irreflexive. ■

3 Proof of weaker versions of Theorems 2 and 2

In this section, we establish the algorithms of Theorems 2 and 2, and prove the weaker version of the hardness claims by a reduction from Theorem 2; that is, our reduction produces input graphs that may have loops. Every homomorphism from G to H is vertex-surjective on its image under G, so the following identities hold:

The second equation is the inversion of the first one, and one way to obtain it is by an application of the principle of inclusion and exclusion. (Another way is to observe that (1) is equivalent to the matrix identity Hom=VertSurj⋅Ind analogously to how this was done in [2, Section 3]; inverting Ind yields the matrix identity VertSurj=Hom⋅Ind−1 that is equivalent to (2)). For compactions we get similar identities from the fact the every homomorphism from G to H is a compaction to a subgraph of H obtained by deleting vertices and non-loop edges. We obtain Hom=Comp⋅S˙ub, and we expand this equation and its inversion for convenience. For all G,H∈G, we have:

Note that the sum in (3) is indeed finite since S˙ub(F,H)≠0 holds only for finitely many graphs F, namely certain subgraphs of H. Since S˙ub is an infinite upper triangular matrix with 1s on its diagonal, it has an inverse matrix S˙ub−1, which is also upper triangular with 1s on its diagonal, and so S˙ub−1(F,H)≠0 holds only if S˙ub(F,H)≠0, and the sum in (4) is also finite.

The algorithms for Theorems 2 and 2 immediately follow from (2) and (4) since we want to compute the left sides of the equations and can, respectively, compute the right sides in polynomial time using Theorem 2. For the case of VertSurj, note that deleting any vertices of H∈F again yields a graph in F. For the case of Comp, note that deleting any vertices and non-loop edges of H∈C yields a graph H′∈C, and that C⊆F holds. (Indeed, C is the unique maximal subset of F that is closed under taking subgraphs in the sense of S˙ub.)

We use two ingredients. The first is the following fact for the disjoint union [5, (5.28)].

The second is the following lemma proved by Lovász.

Let S⊆G be a finite set of unlabeled graphs that is closed in the sense that, for all H∈S, the set S contains all homomorphic images H′∈G of H. Then the (S×S)-matrix A with AF,H=Hom(F,H) is invertible. ■

The following lemma is completely analogous to its dual version in [2, Lemma 3.6].

Let α:G→R be a function of finite support and let f:G→R be the graph parameter with

When given oracle access to f, we can compute Hom(.,H) in polynomial time for all H∈supp(α). ■

Let T=supp(α) be the support of α, that is, the set of all graphs H∈G with α(H)≠0. Let S⊆G be the set of all homomorphic images of graphs in T. For each F∈S, we have:

We define a vector

β∈RS with β(H)=α(H)⋅Hom(G,H). Let A be the (S×S)-matrix with AF,H=Hom(F,H). By the previous lemma, this matrix is invertible. Finally, let b∈RS be the vector with b(F)=f(G∪F). Then b can be written as the matrix-vector product: b=A⋅β. Thus we have β=A−1⋅b. The vector b can be computed in polynomial time by querying the oracle for the values f(G∪F). The matrix A can be computed in constant time since it only depends on the fixed function f. Thus we can compute the entire vector β. In particular, for each H∈supp(α), we can determine Hom(G,H) via the identity Hom(G,H)=β(H)/α(H) since α(H)≠0. ■

Applying this lemma to f(∗)=VertSurj(∗,H) and f(∗)=Comp(∗,H) yields the hardness of Theorems 2 and 2. The reason is that both functions f can written as a linear combination of Hom(G,H) via (2) and (4), and in both cases a counting function Hom(∗,F) that is hard by Theorem 2 appears in the support of α.

is the infinite identity matrix, we have:

I thank Jacob Focke, Leslie Ann Goldberg, and Standa Živný for comments on an earlier version of this note, and for subsequent discussions at the Dagstuhl Seminar 17341 on “Computational Counting” in August 2017. I thank Radu Curticapean and Marc Roth for many discussions and comments.