For the mean vector test in high dimension, Ayyala et al.(2017,153:136-155) proposed new test statistics when the observational vectors are M dependent. Under certain conditions, the test statistics for one-same and two-sample cases were shown to be asymptotically normal. While the test statistics and the asymptotic results are valid, some parts of the proof of asymptotic normality need to be corrected. In this work, we provide corrections to the proofs of their main theorems. We also note a few minor discrepancies in calculations in the publication. 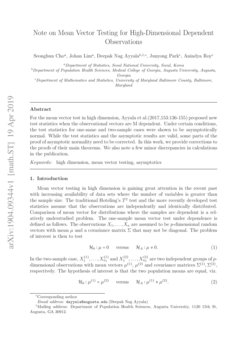 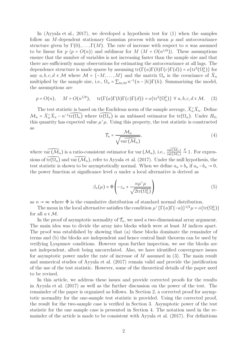 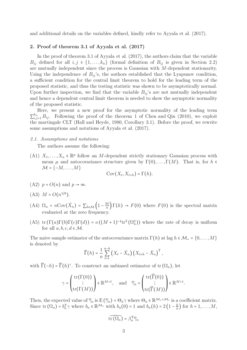 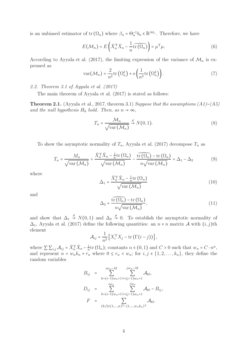 Mean vector testing in high dimension is gaining great attention in the recent past with increasing availability of data sets where the number of variables is greater than the sample size. The traditional Hoteling’s T2 test and the more recently developed test statistics assume that the observations are independently and identically distributed. Comparison of mean vector for distributions where the samples are dependent is a relatively understudied problem. The one-sample mean vector test under dependence is defined as follows. The observations X1,…,Xn are assumed to be p-dimensional random vectors with mean μ and a covariance matrix Σ that may not be diagonal. The problem of interest is then to test

In the two-sample case, X(1)1,…,X(1)n1 and X(2)1,…,X(2)n2 are two independent groups of p-dimensional observations with mean vectors μ(1), μ(2) and covariance matrices Σ(1),Σ(2), respectively. The hypothesis of interest is that the two population means are equal, viz.

In (Ayyala et al., 2017), we developed a hypothesis test for (1) when the samples follow an M-dependent stationary Gaussian process with mean μ and autocovariance structure given by Γ(0),…,Γ(M). The rate of increase with respect to n was assumed to be linear for p (p=O(n)) and sublinear for M (M=O(n1/8)

). These assumptions ensure that the number of variables is not increasing faster than the sample size and that there are sufficiently many observations for estimating the autocovariance at all lags. The dependence structure is made sparse by assuming

The test statistic is based on the Euclidean norm of the sample average, ¯X⊤n¯Xn. Define Mn=¯X⊤n¯Xn−n−1ˆtr(Ωn) where ˆtr(Ωn)

is an unbiased estimator for

tr(Ωn). Under H0, this quantity has expected value μ⊤μ. Using this property, the test statistic is constructed as

. Under the null hypothesis, the test statistic is shown to be asymptotically normal. When we define

an≃bn if an−bn→0, the power function at significance level α under a local alternative is derived as

In the proof of asymptotic normality of Tn, we used a two-dimensional array argument. The main idea was to divide the array into blocks which were at least M

indices apart. The proof was established by showing that (a) these blocks dominate the remainder of terms and (b) the blocks are independent and hence central limit theorem can be used by verifying Lyapunov conditions. However upon further inspection, we see the blocks are not independent, albeit being uncorrelated. Also, we have identified convergence issues for asymptotic power under the rate of increase of

M assumed in (3). The main result and numerical studies of Ayyala et al. (2017) remain valid and provide the justification of the use of the test statistic. However, some of the theoretical details of the paper need to be revised.

In the proof of theorem 3.1 of Ayyala et al. (2017), the authors claim that the variable Bij defined for all i,j∈{1,…,kn} (formal definition of Bij is given in Section 2.2) are mutually independent since the process is Gaussian with M-dependent stationarity. Using the independence of Bij’s, the authors established that the Lyapunov condition, a sufficient condition for the central limit theorem to hold for the leading term of the proposed statistic, and thus the testing statistic was shown to be asymptotically normal. Upon further inspection, we find that the variable Bij’s are not mutually independent and hence a dependent central limit theorem is needed to show the asymptotic normality of the proposed statistic.

Here, we present a new proof for the asymptotic normality of the leading term ∑kni,j=1Bij. Following the proof of the theorem 1 of Chen and Qin (2010), we exploit the martingale CLT (Hall and Heyde, 1980, Corollary 3.1). Before the proof, we rewrite some assumptions and notations of Ayyala et al. (2017).

The authors assume the following:

The naive sample estimator of the autocovariance matrix Γ(h) at lag h∈M+={0,…,M} is denoted by

with ˆΓ(−h)=ˆΓ(h)⊤. To construct an unbiased estimator of tr(Ωn), let

is an unbiased estimator of tr(Ωn) where βn=Θ−1nbn∈RM+. Therefore, we have

, the limiting expression of the variance of

Mn is expressed as

To show the asymptotic normality of Tn, Ayyala et al. (2017) decompose Tn as

, they define the random variables

and show that Δ11d→N(0,1) and Δ12p→0. While convergence of Δ12 can be established esasily, asymptotic normality of Δ11 is not straightforward.

In Ayyala et al. (2017), the authors assumed that the blocks Bij’s are independently distributed with unequal covariances. However, they are not independent even though the blocks have zero covariance, cov(Bij,Bi′j′)=0 if (i,j)≠(i′,j′). The dependence structure of the blocks should be taken into account in establishing limiting distribution. We provide a new proof for asymptotic normality of Δ11 which takes into account the dependence between the Bij blocks.

Under the assumption of Theorem 2.1, it holds that

Then, Y1,…,Ykn are independent and identically distributed Gaussian variables with mean vector 0 and covariance matrix Cov(Yi)=1wn−MΩwn where Ωwn=∑h∈M(1−|h|wn−M)Γ(h). We note that for i≠j,

To show the asymptotic normality of ∑i≠jBij, we need some lemmas.

For each n, (Snm,Fnm)knm=2 is the sequence of zero mean and a square integrable martingale.

Since Yi’s are i.i.d. Gaussian random variables with zero mean, Snm has zero mean and is square integrable for any n,m. We observe

, then its first moment is

The second moment of ηn is

and thus the variance of ηn is

It suffices to show

We have thus established the sufficient conditions for martingale Central Limit Theorem. By the Corollary 3.1 of Hall and Heyde (1980), Lemmas 2.3, 2.4 and 2.5,

Therefore, we get the desired result

By construction of the blocks, we have wng−Mng≍1kng from ng=kngwng+rng with wng satisfying M=o(wng) for g=1,2 where ≍ is defined in (15). As done in one sample problem, if we define

where Ygi=1wng−M∑iwng−Mk=(i−1)wng+1Xgk, then two sample test statistic is

As in one sample case, we can show