Note on Local Projections as a System of Equations 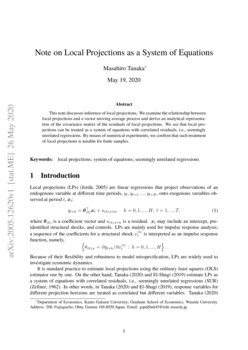 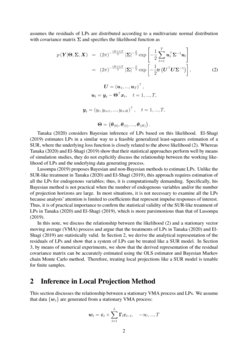 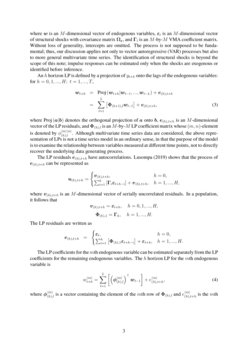 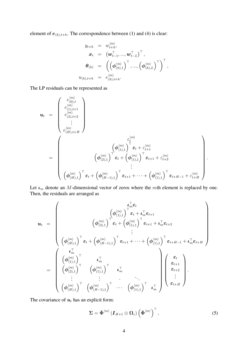 A note on devising HDG+ projections on polyhedral elements

A local projection is a statistical framework that accounts for the rela...
Masahiro Tanaka, et al. ∙

Staging Human-computer Dialogs: An Application of the Futamura Projections

We demonstrate an application of the Futamura Projections to human-compu...
Brandon M. Williams, et al. ∙

This paper extends previous research in that sense that for orthogonal p...
Mieczysław A. Kłopotek, et al. ∙

are linear regressions that project observations of an endogenous variable at different time periods,

Because of their flexibility and robustness to model misspecification, LPs are widely used to investigate economic dynamics.

It is standard practice to estimate local projections using the ordinary least squares (OLS) estimator one by one. On the other hand,

, response variables for different projection horizons are treated as correlated but different variables.

Σ and specifies the likelihood function as

considers Bayesian inference of LPs based on this likelihood.

estimates LPs in a similar way to a feasible generalized least-squares estimation of a SUR, where the underlying loss function is closely related to the above likelihood (

2). Whereas Tanaka (2020) and El-Shagi (2019) show that their statistical approaches perform well by means of simulation studies, they do not explicitly discuss the relationship between the working likelihood of LPs and the underlying data generating process.

Lusompa (2019) proposes Bayesian and non-Bayesian methods to estimate LPs. Unlike the SUR-like treatment in Tanaka (2020) and El-Shagi (2019), this approach requires estimation of all the LPs for endogenous variables; thus, it is computationally demanding. Specifically, his Bayesian method is not practical when the number of endogenous variables and/or the number of projection horizons are large. In most situations, it is not necessary to examine all the LPs because analysts’ attention is limited to coefficients that represent impulse responses of interest. Thus, it is of practical importance to confirm the statistical validity of the SUR-like treatment of LPs in Tanaka (2020) and El-Shagi (2019), which is more parsimonious than that of Lusompa (2019).

In this note, we discuss the relationship between the likelihood (2) and a stationary vector moving average (VMA) process and argue that the treatments of LPs in Tanaka (2020) and El-Shagi (2019)

are statistically valid. In Section 2, we derive the analytical representation of the residuals of LPs and show that a system of LPs can be treated like a SUR model. In Section 3, by means of numerical experiments, we show that the derived representation of the residual covariance matrix can be accurately estimated using the OLS estimator and Bayesian Markov chain Monte Carlo method. Therefore, treating local projections like a SUR model is tenable for finite samples.

where w is an M-dimensional vector of endogenous variables, εt is an M-dimensional vector of structural shocks with covariance matrix Ωε, and Γl is an M-by-M VMA coefficient matrix. Without loss of generality, intercepts are omitted. The process is not supposed to be fundamental; thus, our discussion applies not only to vector autoregressive (VAR) processes but also to more general multivariate time series. The identification of structural shocks is beyond the scope of this note; impulse responses can be estimated only when the shocks are exogenous or identified before inference.

where Proj(a|b) denotes the orthogonal projection of a onto b, e(h),t+h is an M-dimensional vector of the LP residuals, and Φ(h),l is an M-by-M LP coefficient matrix whose (m,n)-element is denoted by ϕ⟨m⟩⟨n⟩(h),l. Although multivariate time series data are considered, the above representation of LPs is not a time series model in an ordinary sense, in that the purpose of the model is to examine the relationship between variables measured at different time points, not to directly recover the underlying data generating process.

The LP residuals e(h),t+h have autocorrelations. Lusompa (2019) shows that the process of e(h),t+h can be represented as

where v(h),t+h is an M-dimensional vector of serially uncorrelated residuals. In a population, it follows that

The LP residuals are written as

where ϕ⟨m⟩(h),l is a vector containing the element of the mth row of Φ(h),l and e⟨m⟩(h),t+h is the mth element of e(h),t+h. The correspondence between (1) and (4) is clear:

The LP residuals can be represented as

Let ιm denote an M-dimensional vector of zeros where the mth element is replaced by one. Then, the residuals are arranged as

The covariance of ut has an explicit form:

Note that ¯Φ⟨m⟩ does not contain the LP coefficients for the remaining endogenous variables. Therefore, the likelihood of this subsystem is independent from the VMA coefficients for the remainder of the whole system (3). Since Σ is full rank and not diagonal in general, a system of LPs as a subsystem of (3) can be treated like a SUR model with multivariate normal errors, using the working likelihood (2). Under this treatment, the parameters compounding Σ are not identified separately, but for typical applications of LPs, the exact identification of them is not of concern.

Lusompa (2019) proposes a Bayesian method to estimate the whole system (3). His posterior simulation algorithm consists of two steps. First, the horizon 0 LP, which is equivalent to a VAR model, is estimated. Then for each draw the remaining coefficients are simulated from the conditional posteriors sequentially for h=1,2,...,H. This algorithm is computationally demanding, as all the coefficient matrices of the whole system are inferred. In most situations, the analyst’s focus is limited to a small portion of these matrices, e.g., coefficients that represent impulse responses of interest, so inference about the whole system is not unnecessary. As long as structural shocks of interest are identified before inference, the SUR-like treatment of LPs is advantageous to the approach of Lusompa (2019).

By means of numerical experiments, we investigate the small-sample performance of non-Bayesian and Bayesian approaches in the inference of a LP model. Synthetic data are generated from the following VMA process:

We fix M=3, L=5, H=7, and T=200. Our focus is on inference of the responses of the second element of wt to the first element of wt, which is exogenous to the system. A covariate vector xt includes L lags of wt and an intercept. The parameters for the synthetic data are randomly generated. Let γi,j,l denote the (i,j)-element of Γl. The first element of wt is a pre-identified structural shock w1,t=ε1,t; thus, all the first rows of Γl are zero. A sequence of the (2,1)-elements of Γl, denoted by γIRF={γ2,1,1,...,γ2,1,L}, represents the impulse responses of interest. γIRF is specified as

where d=0.8. The diagonal elements of Γ1 are uniformly sampled from a unit interval, (0,1). The second to third rows of Γl are set as Γ2:3,1:3,l=0.5(L−l)L−1Γ∗2:3,1:3, where each entry of Γ∗2:3,1:3 is independently generated from the standard normal distribution. Σε is simulated from an inverse Wishart distribution with scale matrix IM and Mdegrees of freedom.

First, we consider a feasible generalized least-squares estimator as in El-Shagi (2019). In the first step, Θ is estimated using the OLS estimator,

The second-step estimate of Θ is obtained using ^Σ. The system might be reestimated iteratively. The validity of this approach hinges critically on the precision of ^Σ. The parameters Γl and Σε are generated once and are fixed throughout the experiment, while the structural shocks εt are randomly generated for each trial. Figures 1–3 compare ^Σ for 1,000 synthetic data with the true value of Σ given by (5) and (6). Vertical lines denote the true values and histograms represent the OLS estimates of Σ for different data. As evident from these figures, Σ can be consistently estimated based on the OLS residuals. Figure 4 shows histograms of the estimates of γIRF. We see that γIRF can be estimated by the OLS estimator.

Next, in a similar vein, we consider Bayesian inference of LPs. To minimize the influence of priors on the posterior, we use a flat prior for Θ, p(Θ)∝1, and a scale-invariant Jeffreys prior for Σ, p(Σ)∝|Σ|−(H+2)/2. Posterior draws are simulated using a Gibbs sampler, and the conditionals are specified as