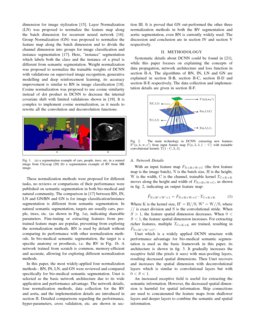 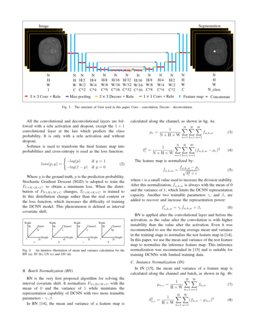 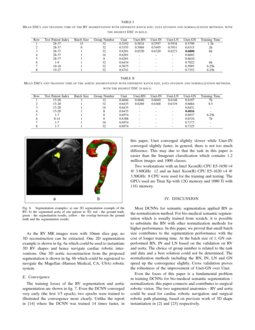 [10]. A hierarchical DCNN was designed with two-stage FCN and dice-sensitivity-like loss function to segment breast tumors from dynamic contrast-enhanced MR imaging [11]. The thrombus was segmented from CT images with detectnet, FCN and holistically-nested edge detection [12]. Equally-weighted focal Unet combined with focal loss and Unet was proposed to segment the small markers from fluoroscopic images in FEVAR [13].

The main technology in DCNN is to apply convolutional kernels with trainable parameters on feature maps to extract new features iteratively. During the training of DCNN, the input of a layer depends on all the parameters/values in its previous layers/feature maps. The small changes in the first input feature map/image batch accumulate and amplify along the depth of network, causing later layers to be trained to fit these changes rather than the real and useful content. This phenomenon is called internal covariate shift [14]

which is more obvious for training images with large variance. Batch Normalization (BN)

[14] is the very first proposed solution for internal covariate shift which normalized the feature map along the channel direction and remained the representation capacity of DCNN by re-scaling and re-translating the normalized feature map. It is the most widely-used DCNN normalization method for both bio-medical and natural semantic segmentation.

. Layer Normalization (LN) was proposed to normalize the feature map along the batch dimension for recurrent neural network

[16]. Group Normalization (GN) was proposed to normalize the feature map along the batch dimension and to divide the channel dimension into groups for image classification and instance segmentation [17]

. Here, ”instance” segmentation which labels both the class and the instance of a pixel is different from semantic segmentation. Weight normalization was proposed to normalize the trainable weights of DCNN with validations on supervised image recognition, generative modelling and deep reinforcement learning, its accuracy improvement is similar to BN in image classification

. Cosine normalization was proposed to use cosine similarity instead of dot product in DCNN to decrease the internal covariate shift with limited validations shown in

[19]. It is complex to implement cosine normalization, as it needs to rewrite all the convolution and deconvolution functions.

In this paper, the most widely-applied four normalization methods - BN, IN, LN, and GN were reviewed and compared specifically for bio-medical semantic segmentation. Unet is selected as the basic network architecture due to its wide application and performance advantage. The network details, four normalization methods, data collection for the RV and aorta, and the implementation details are introduced in section II. Detailed comparisons regarding the performance, hyper-parameters, cross validation, etc. are shown in section III. It is proved that GN out-performed the other three normalization methods in both the RV segmentation and aortic segmentation, even BN is currently widely used. The discussion and conclusion are in section IV and section V respectively.

Systematic details about DCNN could be found in [21], while this paper focuses on explaining the concepts of data propagation, network architecture and loss function in section II-A. The algorithms of BN, IN, LN and GN are explained in section II-B, section II-C, section II-D and section II-E respectively. The data collection and implementation details are given in section II-F.

With an input feature map FN×H×W×C (the first feature map is the image batch), N is the batch size, H is the height, W is the width, C is the channel, trainable kernel TC×K×K moves along the height and width of FN×H×W×C, as shown in fig. 2, indicating an output feature map:

is the convolutional stride. When

Unet which is a widely applied DCNN structure with performance advantage for bio-medical semantic segmentation is used as the basic framework in this paper, its architecture is shown in fig. 3

convolutional layer at the last which predicts the class probability. It is only with a relu activation and without dropout.

Softmax is used to transform the final feature map into probabilities and cross-entropy is used as the loss function:

Where y is the ground truth, p

is the prediction probability. Stochastic Gradient Descent (SGD) is adopted to train the

TC×K×K×C′ to obtain a minimum loss. When the distribution of FN×H×W×C changes, TC×K×K×C′ is trained to fit this distribution change rather than the real content or the loss function, which increases the difficulty of training the DCNN model. This phenomenon is defined as interval covariate shift.

BN is the very first proposed algorithm for solving the interval covariate shift. It normalizes FN×H×W×C with the mean of 0 and the variance of 1 while maintains the representation capability of DCNN with two more trainable parameters - γ,β.

In BN [14], the mean and variance of a feature map is calculated along the channel, as shown in fig. 4a:

where ϵ is a small value used to increase the division stability. After this normalization, ^fn,h,w is always with the mean of 0 and the variance of 1, which limits the DCNN representation capacity. Another two trainable parameters γc and βc are added to recover and increase the representation power:

BN is applied after the convolutional layer and before the activation, as the value after the convolution is with higher instability than the value after the activation. Even it was recommended to use the moving average mean and variance in the training stage to normalize the test feature map in [14], In this paper, we use the mean and variance of the test feature map to normalize the inference feature map. This inference normalization was recommended in [15] and is suitable for training DCNNs with limited training data.

In IN [15], the mean and variance of a feature map is calculated along the channel and batch, as shown in fig. 4b:

Then ^fh,w is re-scaled and re-translated by trainable variables γn,c and βn,c to restore the representation power:

In LN [16], the mean and variance of a feature map is calculated along the batch, as shown in fig. 4c:

Then ^fn,h,w is re-scaled and re-translated by trainable variables γn and βn to restore the representation power:

In GN [17], the mean and variance of a feature map is calculated along the batch and the channel. The difference between GN and IN/LN is that a group of channels M=C//G are grouped for the normalization, G is the group number, M of the channel number per group, as shown in fig. 4c,:

Then ^fh,w,m is re-scaled and re-translated by trainable variables γn,g and βn,g to restore the representation power:

The number of additional trainable variables in BN, IN, LN and GN for one feature map are C, C∗N, N and N∗G.

37 RV scans were acquired from a 1.5T MR scanner (Sonata, Siemens, Erlangen, Germany), from both the asymptomatic and Hypertrophic cardiomyopathy (HCM) subjects, from the atrioventricular ring to the apex, with a 10mm slice gap, with a 1.5−2mm pixel spacing, and with 19−25 time frames for the cardiac cycle. 6082 images were collected in total for the RV. To achieve a ground truth with high precision and consistence, all the images were labelled by one expert with Analyze (AnalyzeDirect, Inc, Overland Park, KS, USA). The 37 subjects were split randomly into four groups: Subject 1-9, Subject 10-18, Subject 19-27, and Subject 28-37. In the cross validation, one group was used as the testing while the other three groups were used for the training. In all other experiments, Subject 28-37 were used as the testing while Subject 1-9, Subject 10-18, and Subject 19-27 were used as the training.

Training images were augmented by rotation from −45∘−45∘ with 9∘ as the interval. All images were normalized by their maximum intensity. As the performance of normalization methods is the main focus of this paper, no evaluation images were split.

The DCNN framework is programmed with Tensroflow Estimator Application Programming Interface (API) tersely, with about 200 lines of codes. The convolutional, deconvolutional, and max-pooling layers are programmed with tf.layers. The programming of BN is from tf.layers while that of IN, LN and GN are from tf.contrib.layers. The data is fed into tensorflow with tfrecords and tf.data API. The images were shuffled when generating the tfrecords files and then was shuffled again with a shuffle size of 500 during the feeding, which guaranteed random input images.

Dice Similarity Coefficient (DSC) was calculated as the evaluation metric:

Iii-a The Influence of Batch Size

Unet-GN out-performed Unet, Unet-BN, Unet-IN with noticeable margins for all tests and under-performed Unet-LN in only one test (the RV segmentation with batch size of 15). We can conclude that GN is more suitable for bio-medical semantic segmentation, especially when the batch size is as small as 1.

Iii-B The Influence of Group Number

The mean±std DSCs segmented in Row 3 in table I and Row 2 in table II are calculated for each RV and aortic subject, as shown in fig. 5. Unet-GN out-performed other methods especially for under-performed subjects, i.e. subject 3 for the RV, as it is with lower intensity and subject 1 for the aorta, as it is with smaller aortic size. Improved data augmentation may facilitate these two subjects, however this is out of the scope of this paper which is the normalization in DCNN training.

As the RV MR images were with 10mm slice gap, no 3D reconstruction can be extracted. One 2D segmentation example is shown in fig. 6a which could be used to instantiate 3D RV shapes and hence navigate cardiac robotic interventions. One 3D aortic reconstruction from the proposed segmentation is shown in fig. 6b which could be registered to navigate the Magellan (Hansen Medical, CA, USA) robotic system.

The training losses of the RV segmentation and aortic segmentation are shown in fig. 7. Even the DCNN converged very early (the first 1/3 epoch), two epochs were trained to illustrated the convergence more clearly. Unlike the report in [14]

Most DCNNs for semantic segmentation applied BN as the normalization method. For bio-medical semantic segmentation which is usually trained from scratch, it is possible to substitute the BN with other normalization methods for higher performance. In this paper, we proved that small batch size contributes to the segmentation performance with the cost of longer training time. At the batch size of 1, GN out-performed BN, IN and LN based on the validation on RV and aorta. The choice of group number is related to the task and data and a best solution could not be determined. The normalization methods including the BN, IN, LN and GN speed up the convergence slightly. Cross validation proves the robustness of the improvement of Unet-GN over Unet.

Even the focus of this paper is a fundamental problem in training DCNNs for bio-medical semantic segmentation - normalization, this paper connects and contributes to surgical robotic vision. The two segmented anatomies - RV and aorta could be used for cardiac robotic navigation and surgical robotic path planning, based on previous work of 3D shape instantiation in [2] and [23] respectively.

This paper explores the bio-medical semantic segmentation in surgical robotic vision and focuses on the normalization in training DCNNs. Four most popular normalization methods -BN, IN, LN and GN are reviewed and compared in details. Small batch size indicates higher segmentation accuracy and GN out-performed all the other three normalization methods including the widely-applied BN. Different from the conclusion in [17] where different group numbers perform similarly, different group numbers perform differently in bio-medical semantic segmentation in this paper.

This work is supported by EPSRC project grant EP/L020688/1. We gratefully acknowledge the support of NVIDIA Corporation with the donation of the Titan Xp GPU used for this research.