Normal Bandits of Unknown Means and Variances: Asymptotic Optimality, Finite Horizon Regret Bounds, and a Solution to an Open Problem

Consider the problem of sampling sequentially from a finite number of N ≥ 2 populations, specified by random variables X^i_k, i = 1,... , N, and k = 1, 2, ...; where X^i_k denotes the outcome from population i the k^th time it is sampled. It is assumed that for each fixed i, { X^i_k }_k ≥ 1 is a sequence of i.i.d. normal random variables, with unknown mean μ_i and unknown variance σ_i^2. The objective is to have a policy π for deciding from which of the N populations to sample form at any time n=1,2,... so as to maximize the expected sum of outcomes of n samples or equivalently to minimize the regret due to lack on information of the parameters μ_i and σ_i^2. In this paper, we present a simple inflated sample mean (ISM) index policy that is asymptotically optimal in the sense of Theorem 4 below. This resolves a standing open problem from Burnetas and Katehakis (1996). Additionally, finite horizon regret bounds are given. 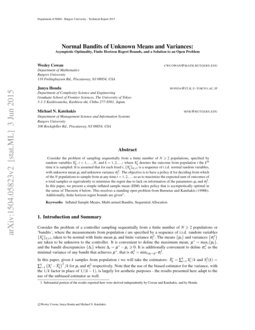 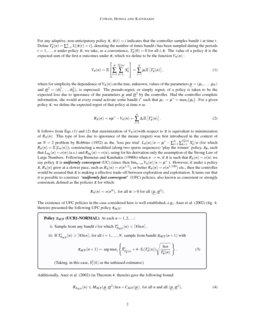 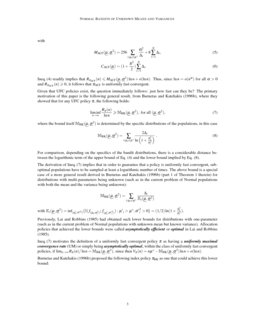 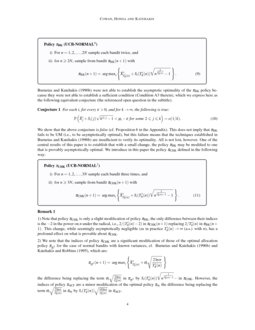 Consider the problem of a controller sampling sequentially from a finite number of N⩾2 populations or ‘bandits’, where the measurements from population i are specified by a sequence of i.i.d. random variables {Xik}k⩾1, taken to be normal with finite mean μi and finite variance σ2i. The means {μi} and variances {σ2i} are taken to be unknown to the controller. It is convenient to define the maximum mean, μ∗=maxi{μi}, and the bandit discrepancies {Δi} where Δi=μ∗−μi⩾0. It is additionally convenient to define σ2∗ as the minimal variance of any bandit that achieves μ∗, that is σ2∗=mini:μi=μ∗σ2i.

In this paper, given k samples from population i

we will take the estimators:

, is largely for aesthetic purposes - the results presented here adapt to the use of the unbiased estimator as well.

For any adaptive, non-anticipatory policy π, π(t)=i indicates that the controller samples bandit i at time t. Define Tiπ(n)=∑nt=11{π(t)=i}, denoting the number of times bandit i has been sampled during the periods t=1,…,n under policy π; we take, as a convenience, Tiπ(0)=0 for all i,π. The value of a policy π is the expected sum of the first n outcomes under π, which we define to be the function Vπ(n):

where for simplicity the dependence of Vπ(n) on the true, unknown, values of the parameters μ––=(μ1,…,μN) and σ––2=(σ21,…,σ2N), is supressed. The pseudo-regret, or simply regret, of a policy is taken to be the expected loss due to ignorance of the parameters μ–– and σ––2 by the controller. Had the controller complete information, she would at every round activate some bandit i∗ such that μi∗=μ∗=maxi{μi}. For a given policy π, we define the expected regret of that policy at time n as

, using for his derivation only the assumption of the Strong Law of Large Numbers. Following

Burnetas and Katehakis (1996b) when n→∞, if π is such that Rπ(n)=o(n) we say policy π is uniformly convergent (UC) (since then limn→∞Vπ(n)/n=μ∗ ). However, if under a policy π, Rπ(n) grew at a slower pace, such as Rπ(n)=o(n1/2), or better Rπ(n)=o(n1/100) etc., then the controller would be assured that π is making a effective trade-off between exploration and exploitation. It turns our that it is possible to construct ‘uniformly fast convergent’ (UFC) policies, also known as consistent or strongly consistent, defined as the policies π for which:

Given that UFC policies exist, the question immediately follows: just how fast can they be? The primary motivation of this paper is the following general result, from Burnetas and Katehakis (1996b), where they showed that for any UFC policy π, the following holds:

where the bound itself MBK(μ––,σ––2) is determined by the specific distributions of the populations, in this case

For comparison, depending on the specifics of the bandit distributions, there is a considerable distance between the logarithmic term of the upper bound of Eq. (4) and the lower bound implied by Eq. (8).

The derivation of Ineq. (7) implies that in order to guarantee that a policy is uniformly fast convergent, sub-optimal populations have to be sampled at least a logarithmic number of times. The above bound is a special case of a more general result derived in Burnetas and Katehakis (1996b) (part 1 of Theorem 1 therein) for distributions with multi-parameters being unknown (such as in the current problem of Normal populations with both the mean and the variance being unknown):

We show that the above conjecture is false (cf. Proposition A in the Appendix). This does not imply that πBK fails to be UM (i.e., to be asymptotically optimal), but this failure means that the techniques established in Burnetas and Katehakis (1996b) are insufficient to verify its optimality. All is not lost, however. One of the central results of this paper is to establish that with a small change, the policy πBK may be modified to one that is provably asymptotically optimal. We introduce in this paper the policy πCHK defined in the following way: [colback=blue!1, arc=3pt, width=.94] Policy \boldmathπCHK (UCB-NORMAL2)

1) Note that policy πCHK is only a slight modification of policy πBK, the only difference between their indices is the −2 in the power on n under the radical, i.e., 2/(Tiπ(n)−2) in πCHK(n+1) replacing 2/Tiπ(n) in πBK(n+1). This change, while seemingly asymptotically negligible (as in practice Tiπ(n)→∞ (a.s.) with n), has a profound effect on what is provable about πCHK.

2) We note that the indices of policy πCHK are a significant modification of those of the optimal allocation policy πσ––2 for the case of normal bandits with known variances, cf. Burnetas and Katehakis (1996b) and Katehakis and Robbins (1995), which are:

The structure of the rest of the paper is as follows. In section 2, Theorem 2 establishes a finite horizon bound on the regret of πCHK. From this bound, it follows that πCHK is asymptotically optimal (Theorem 2), and we provide a bound on the remainder term (Theorem 2). Additionally, in Section 3, the Thompson sampling policy of Honda and Takemura (2013) and πCHK are compared and discussed, as both achieve asymptotic optimality.

The main results of this paper, that Conjecture 1 is false (cf. Proposition A in the Appendix), the asymptotic optimality, and the bounds on the behavior of πCHK

, all depend on the following probability bounds; we note that tighter bounds seem possible, but these are sufficient for this paper.

Let Z, U be independent random variables, Z∼N(0,1) a standard normal, and U∼χ2d

a chi-squared distribution with

[of Proposition 2] The proof is given in the Appendix.

For policy πCHK as defined above, the following bounds hold for all n⩾3N and all ϵ∈(0,1):

Before giving the proof of this bound, we present two results, the first demonstrating the asymptotic optimality of πCHK, the second giving an ϵ-free version of the above bound, which gives a bound on the sub-logarithmic remainder term. It is worth noting the following. The bounds of Theorem 2 can actually be improved, through the use of a modified version of Proposition 2, to eliminate the lnlnn dependence, so the only dependence on n is through the initial lnn term. The cost of this, however, is a dependence on a larger power of 1/ϵ. The particular form of the bound given in Eq. (13) was chosen to simplify the following two results, cf. Remark 4 in the proof of Propositition 2.

For a policy πCHK as defined above, πCHK is asymptotically optimal in the sense that

[of Theorem 2] For any ϵ such that 0<ϵ<1, we have from Theorem 2 that the followings holds:

Taking the infimum over all such ϵ,

and observing the lower bound of Eq. (7) completes the result.

While the above bound admittedly has a more complex form than such a bound as in Eq. (4), it demonstrates the asymptotic optimality of the dominating term, and bounds the sub-linear remainder term.

This inequality is proven separately as Proposition A in the Appendix.

We make no claim that the results of Theorems 2, 2 are the best achievable for this policy πCHK. At several points in the proofs, choices of convenience were made in the bounding of terms, and different techniques may yield tighter bounds still. But they are sufficient to demonstrate the asymptotic optimality of πCHK, and give useful bounds on the growth of RπCHK(n).

[of Theorem 1] In this proof, we take π=πCHK as defined above. For notational convenience, we define the index function

The structure of this proof will be to bound the expected value of Tiπ(n) for all sub-optimal bandits i, and use this to bound the regret Rπ(n). The basic techniques follow those in Katehakis and Robbins (1995) for the known variance case, modified accordingly here for the unknown variance case and assisted by the probability bound of Proposition 2. For any i such that μi≠μ∗, we define the following quantities: Let 1>ϵ>0 and define ~ϵ=Δiϵ/2. For n⩾3N,

Hence, we have the following relationship for n⩾3N, that

The proof proceeds by bounding, in expectation, each of the four terms.

Observe that, by the structure of the index function ui,

The last inequality follows, observing that Tiπ(t) may be expressed as the sum of π(t)=i indicators, and seeing that the additional condition bounds the number of non-zero terms in the above sum. The additional +2 simply accounts for the π(1)=i term and the π(n+1)=i term. Note, this bound is sample-path-wise.

For the second term,

The last inequality follows as, for fixed k, {π(t+1)=i,Tiπ(t)=k} may be true for at most one value of t. Recall that kS2i(k)/σ2i has the distribution of a χ2k−1 random variable. Letting Uk∼χ2k, from the above we have

To bound the third term, a similar rearrangement to Eq. (24) (using the sample mean instead of the sample variance) yields:

Recalling that ¯Xik−μi∼Zσi/√k for Z a standard normal,

The penultimate step is a Chernoff bound on the terms, P(Z>δ√k)⩽e−kδ2/2.

To bound the ni4 term, observe that in the event π(t+1)=i, from the structure of the policy it must be true that ui(t,Tiπ(t))=maxjuj(t,Tjπ(t)). Thus, if i∗ is some bandit such that μi∗=μ∗, ui∗(t,Ti∗π(t))⩽ui(t,Tiπ(t)). In particular, we take i∗ to be a bandit that not only achieves the maximal mean μ∗, but also the minimal variance among optimal bandits, σ2i∗=σ2∗. We have the following bound,

The last step follows as for t in this range, 3⩽Ti∗π(t)⩽t. Hence

As an aside, this is essentially the point at which the conjectured Eq. (10) would have come into play for the proof of the optimality of πBK, bounding the growth of the corresponding term for that policy. We will essentially prove a successful version of that conjecture here. Define the events A∗s,<span class="mjx-char MJXc-TeX-math-I" style="padding-top: 0.372em; padding-bottom: