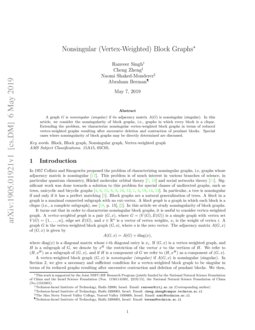 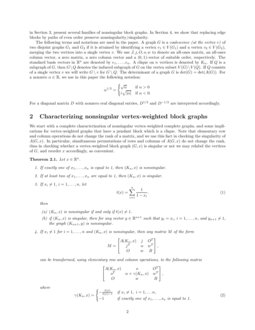 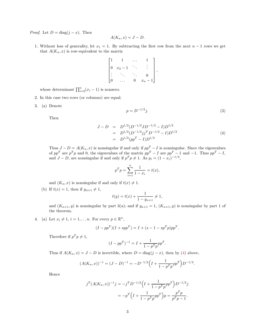 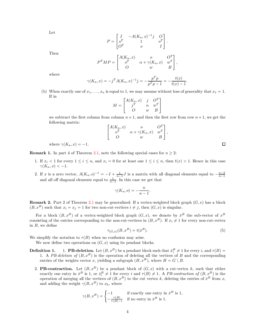 A block graph is a graph in which every block is a complete graph (cliqu...
Ranveer Singh, et al. ∙

Linear time algorithm to check the singularity of block graphs

A block graph is a graph in which every block is a complete graph. Let G...
Ranveer Singh, et al. ∙

Rank of weighted digraphs with blocks

Let G be a digraph and r(G) be its rank. Many interesting results on the...
Ranveer Singh, et al. ∙

In this paper, some subclasses of block graphs are considered in order t...
Daniel Felisberto Traciná Filho, et al. ∙

On motifs in colored graphs

One of the most important concepts in biological network analysis is tha...
Diego P Rubert, et al. ∙

Beyond the adjacency matrix: random line graphs and inference for networks with edge attributes

Suppose two networks are observed for the same set of nodes, where each ...
Yezheng Li, et al. ∙

In 1957 Collatz and Sinogowitz proposed the problem of characterizing nonsingular graphs, i.e, graphs whose adjacency matrix is nonsingular [17]. This problem is of much interest in various branches of science, in particular quantum chemistry, Hückel molecular orbital theory [7, 10] and social networks theory [11]. Significant work was done towards a solution to this problem for special classes of undirected graphs, such as trees, unicyclic and bicyclic graphs [4, 6, 15, 8, 9, 16, 12, 1, 3, 19, 14, 13]. In particular, a tree is nonsingular if and only if it has a perfect matching [5]. Block graphs are a natural generalization of trees. A block in a graph is a maximal connected subgraph with no cut-vertex. A block graph is a graph in which each block is a clique (i.e., a complete subgraph), see [18, p. 15], [2]. In this article we study nonsingularity of block graphs.

is a vector of vertex weights,

xi is the weight of vertex i. A graph G is the vertex-weighted block graph (G,o), where o is the zero vector. The adjacency matrix A(G,x) of (G,x) is given by

The following terms and notations are used in the paper. A graph G is a coalescence (at the vertex v) of two disjoint graphs G1 and G2 if it is attained by identifying a vertex v1∈V(G1) and a vertex v2∈V(G2), merging the two vertices into a single vertex v. We use J,j,O,o,w

(0,1)-vector of suitable order, respectively. The standard basis vectors in Rn are denoted by e1,…,en. A clique on n vertices is denoted by Kn. If Q is a subgraph of G, then G∖Q denotes the induced subgraph of G on the vertex subset V(G)∖V(Q). If Q consists of a single vertex v we will write G∖v for G∖Q. The determinant of a graph G is det(G)=det(A(G)). For a nonzero α∈R, we use in this paper the following notation:

For a diagonal matrix D with nonzero real diagonal entries, D1/2 and D−1/2 are interpreted accordingly.

We start with a complete characterization of nonsingular vertex-weighted complete graphs, and some implications for vertex-weighted graphs that have a pendant block which is a clique. Note that elementary row and column operations do not change the rank of a matrix, and we use this fact in checking the singularity of A(G,x). In particular, simultaneous permutations of rows and columns of A(G,x) do not change the rank, thus in checking whether a vertex-weighted block graph (G,x) is singular or not we may relabel the vertices of G, and reorder x accordingly, as convenient.

In part 4 of Theorem 2.1, note the following special cases for n≥2:

We simplify the notation to τ(B) when no confusion may arise.

Without loss of generality we may assume that the vertices of B are {1,…,k}, and k is the cut-vertex. Then

Without loss of generality we may assume that the vertices of B are {1,…,k}, and k is the cut-vertex. Then

Hence (G,x) is nonsingular if and only if

Note that PB-deletion and PB-contraction may be used for any vertex-weighted graph (G,x) which has a pendant block (B,xB), where B is a clique, and the proper conditions on xB are satisfied. Lemmas 2.2 and 2.3 hold in this case too.

Now suppose no reduced vertex-weighted block graph of (G,x) satisfies 1 or 2. Perform PB-deletions and PB-contractions on (G,x) until a reduced graph (H,y) is obtained, for which no further PB-deletion or PB-contraction is possible. As (H,y) cannot be further reduced, and does not satisfy 2, it does not have any pendant blocks. That is, each of its components is of the form (B,yB), where B is a clique. Since 1 and 2 are not satisfied, either yi=1 for exactly one vertex i of B, or yi≠1 for every vertex i of B and τ(B)≠1. Hence by Theorem 2.1, each component of (H,y) is nonsingular, and so is (G,x). ∎

Let (G,x) be a vertex-weighted block graph that satisfies the following two properties:

We show that such (G,x) may be reduced by PB-contractions to a vertex-weighted clique satisfying (a) and (b). Since such a reduced graph is nonsingular by Theorem 2.1, this will complete the proof.

It suffices to show that if (B,xB) is a pendant block of (G,x) satisfying (a)–(c), then (B,xB) may be PB-contracted and the resulting vertex-weighted block graph will also satisfy (a)–(c).

Let (G,x) be a vertex-weighted block graph, that satisfies the following three properties:

If (G,x) has a pendant block (B,xB), this block may be PB-contracted since τ(B)>1 by the first part of Remark 1. As in the previous theorem, the resulting (H,y) also satisfies (a)–(c). Such (G,x) may be reduced by successive PB-contractions to a single vertex-weighted block satisfying (a)–(c), and is therefore nonsingular. ∎

The two families of vertex-weighted block graphs in Theorems 2.5 and 2.6 are not mutually exclusive, but none of these families fully contains the other.

There are nonsingular block graphs that do not satisfy the requirements in Theorem 2.5. An example of one such graph is given in Figure 0(d) (see Theorem 3.3).

3 Some classes of nonsingular block graphs

In this section we use Theorem 2.4 to identify some families of nonsingular block graphs. First we name the graphs discussed at the end of the previous section.

From Theorem 4 and Remark 4 we deduce the following.

Every B31 block graph is nonsingular

We observe that using Theorem 2.4 one obtains a new proof the following known result.

Let a graph F be a forest on n vertices. Then F is nonsingular if and only if it has a perfect matching.

Next we consider block graphs of a special construction.

Let G be a block graph consisting of a block Kn, n≥2, to which at each vertex i=1,…,n, ki blocks of orders mi1,…,miki, each greater than 2 are attached. Then G is nonsingular if and only if

The result follows by Theorem 2.4. ∎

A special case of Corollary 3.3, where the result is simplified is the following. Let n≥2,m≥3,k≥1 be three integers. We define a family of block graph using these three integers. Let us coalesce k pendant Km blocks at each vertex of Kn. We call the resulting graph an (n,m,k)-block graph. As an example the (4,4,2)-block graph is shown in Figure 1(a). In the case of (n,m,k)-block graphs the necessary and sufficient condition for nonsingularity in Corollary 3.3 becomes simple:

Another special case of Theorem 3.3 is the case that n=2.

Let G be a block graph consisting of a block K2, to which at each of the two vertices some blocks of order greater than 2 each are attached. Then G is nonsingular.

Next we consider the following construction.

A tree of block graphs. Let T be a tree on k vertices, and let G1,…,Gk be block graphs. For every edge e={i,j} of T, choose a vertex ue of Gi and ve of Gj, and connect ue and ve by an edge. The resulting graph G is a block graph, and we call such graph a tree of G1,…,Gk. We refer to each of the edges {ue,ve} in G as a skeleton edge, and to the vertices ue and ve as skeleton vertices. The graph Gi is considered pendant in the tree of G1,…,Gk if the vertex i is pendant in T.

The first result on a tree of block graphs generalizes Corollary 3.5.

Let T be a tree with n vertices i=1,…,n, and let d(i) be the degree of vertex i in T. Let G be the graph obtained by coalescing ki cliques Kmi1,…,Kmiki, each of order at least 3, at each vertex i of T. If

for every i, then G is nonsingular.

If |xi|>d(i) for every i, then A(T,x) is a strictly diagonal dominant matrix, and therefore nonsingular. The result now follows from Theorem 2.4. ∎

Next consider trees of B31 block graphs.

Then G is nonsingular.

For such G, consider weight vectors x with the following three properties:

where w1 and w2 are (0,1)-column vectors, and [A1w1wT10] is A(G1,xG1), and [0wT2w2A2] is the adjacency matrix of (G∖G1,xG∖G1). As each block graph has at leas two pendant blocks, we may perform subsequent PB-contractions of blocks in G1, leaving the block containing the skeleton vertex in G1 to last. After these contractions, the remaining block (B,b) satisfies (a)–(c) of Theorem 2.6. Moreover, bi=0 at least one non-cut-vertex i of B. Thus τ(B)>1, and we may contract it also. The adjacency matrix of the resulting vertex-weighted graph is

Let G be a block graph, in which each block has at least two non-cut-vertices. Then any graph G′ obtained by coalescing edges at some of the cut vertices of G is nonsingular.

By PB-deletion of the coalesced pendant edges, the cut vertices at which they were coalesced are also deleted. The resulting graph is a subgraph of G, whose components are B31 block graphs, and is thus nonsingular, implying nonsingularity of G′. ∎

Starting with a graph like G′ of Theorem 3.8, and some nonsingular graphs, we can construct another nonsingular tree of block graphs.

Let G be a block graph, in which each block has at least two non-cut-vertices. Let G′ is obtained as in Theorem 3.8 by coalescing edges at k different cut vertices v1,…,vk, and let W1,…,Ws be nonsingular block graphs, s≤k. Let T be a star graph K1,s. The tree of block graphs of G′,W1,…,Ws obtained by choosing ui∈V(Wi), i=1,…,s, and letting the skeleton edges be {ui,vi}, i=1,…,s, is nonsingular.

PB-delete each of the k pendant edges. In the resulting graph each component is either a B31 block graph, or a graph like the one in Theorem 3.8, or one of W1,…,Ws. Thus each component is nonsingular, and so is G. ∎

We prove here some results on the determinant of a graph obtained by coalescing two graphs, or combining them by a bridge. These results will imply ways to construct more nonsingular block graphs from known block graphs.

Most of the results in this section are based on [16, Lemma 2.3], restated here for simple graphs with no vertex weights. In this lemma, ϕ(G)=det(A(G)−λI) denotes the characteristic polynomial of the graph G.

Using this lemma, we deduce the following.

If G is a coalescence of G1 and G2 at a vertex v, then

A coalescence of any two singular graphs is singular.

Note that a coalescence of nonsingular graphs may be singular: e.g., the coalescence of two edges results in a singular tree. More generally, we have the following corollary of Lemma 4.2.

If G is any graph, and two pendant edges are coalesced with it at the same vertex v, then the resulting graph G′ is singular.

In Lemma 4.2 let G1 be the coalescence of one of the pendant edges with G, and G2 the second pendant edge. Then G2∖v is a singleton, and G1∖v has a singleton component, thus det(G2∖v)=det(G1∖v)=0, implying that det(G′)=0. ∎