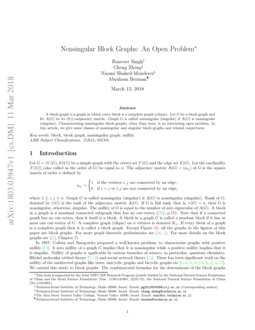 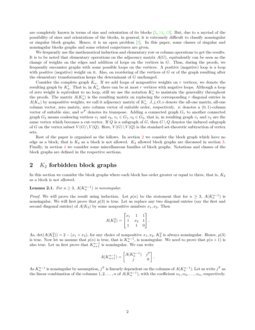 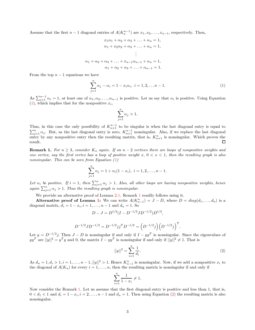 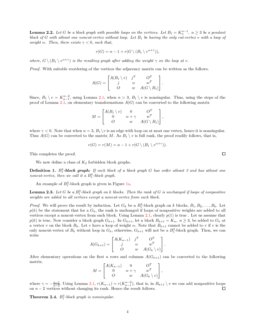 Let G=(V(G),E(G)) be a simple graph with vertex set V(G) and edge set E(G). Let the cardinality |V(G)| (also called the order of G) be equal to n. The adjacency matrix A(G)=(aij) of G is the square matrix of order n defined by

is equal to the number of zero eigenvalues of

A(G). Thus, a zero nullity of a graph G implies that it is nonsingular while a positive nullity implies that it is singular. A cut-vertex of G is a vertex whose removal results in an increase in the number of connected components. A block in a graph is a maximal connected subgraph that has no cut-vertex ([18, p. 15]). Note that if a connected graph has no cut-vertex, then it itself is a block. A block in a graph G is called a pendant block if it has one cut-vertex of G. A complete graph on n vertices is denoted by Kn. If every block of a graph is a complete graph then the graph is called a block graph. Except for the graph in Figure 1(b), all the graphs in the figures of this paper are block graphs. By a K2-forbidden block graph we mean a block graph in which no block is an edge. In other words, K2-forbidden block graphs are those having blocks of order greater or equal to 3. By a K2-allowed block graph we mean a block graph in which blocks may also be edges. For more graph theoretic preliminaries see [18, 1]. For more details on block graphs see ([1], Chapter 7).

A well-known problem, proposed in 1957 by Collatz and Sinogowitz, is to characterize graphs with positive nullity [17]. Nullity of graphs is applicable in various branches of science, in particular quantum chemistry, Hückel molecular orbital theory [7, 10] and social networks theory [11]. There has been significant work on the nullity of undirected graphs like trees, unicyclic graphs, and bicyclic graphs [5, 6, 8, 9, 12, 9, 2, 4, 19, 14, 13]. It is well-known that a tree is nonsingular if and only if it has a perfect matching. Since a tree is a block graph, it is natural to investigate which block graphs are nonsingular in general. Combinatorial formulae for the determinant of block graphs are known in terms of size and arrangements of its blocks [3, 16, 15]

. But due to a myriad of possibilities of sizes and arrangements of the blocks in general, it is difficult to classify nonsingular or singular block graphs. Hence, it is an open problem

[3]. In this paper, some classes of singular and nonsingular blocks graphs and some related conjectures are presented.

We frequently use mathematical induction and elementary row or column operations. The elementary operations transform the adjacency matrix A(G) to another matrix EA(G), which may have nonzero diagonal entries. The graph corresponding to EA(G) can be obtained by a change of weights on the edges and addition of loops on the vertices in G according to the elementary operations on A(G). Thus, during the proofs, we often encounter graphs with some possible loops on the vertices. Reordering the vertices of G or of the graph resulting after elementary operations keeps the rank unchanged. If Q is a subgraph of G, then G∖Q denotes the induced subgraph of G on the vertex subset V(G)∖V(Q). Here, V(G)∖V(Q) is the standard set-theoretic subtraction of vertex sets. If Q consists of a single vertex v we will write G∖v for G∖Q. If e is an edge of G on vertices u,v, then G∖e denotes the graph with vertex set V(G)∖{u,v} and edge set E(G)∖{e}. Let G1=(V1,E1) and G2=(V2,E2) be graphs on disjoint sets of vertices. Their disjoint union G1+G2 is the graph G1+G2=(V1∪V2,E1∪E2). A coalescence of graphs G1 and G2 is any graph obtained from the disjoint union G1+G2 by identifying a vertex of G1 with a vertex of G2, that is, merging two vertices, one from each graph, into a single vertex. By Pn we denote a path graph on n vertices. Consider a graph G. Let G′ be obtained by coalescing Pn with G at some vertex v, then Pn is called a pendant path of G′.

Consider any r vertices, say v1,…,vr, of a complete graph Kn. If at each vertex vi, i=1,…,r, a loop of weight xi<1 is added, we denote the resulting graph by Krn. The matrix A(Krn) is the matrix resulting by replacing the corresponding r diagonal entries in A(Kn) by weights xi,i=1,…,r. J,j,O,o

w denotes a (0,1)-column vector of suitable order, and wT denotes its transpose.

If G is a coalescence of G1 and G2 at a vertex v, then

where for every graph G, ϕ(G)=det(A(G)−λI) is the characteristic polynomial of G, and α is the weight of the loop at v. Since det(G) is obtained in substituting λ=0 in ϕ(G), and in our case α=0, we get that

A coalescence of any two singular graphs is singular.

Let G be coalescence of singular graphs G1 and G2. Let v be the common vertex of G1 and G2 in the coalescence. By Lemma 1.1

Note that in general it is not necessarily true that if we add an edge between the vertices of two nonsingular graphs then the resulting graph is also nonsingular. The following corollary makes it clear.

If G1∖v1 or G2∖v2 is a null graph then the determinant by convention is equal to 1. Thus G is nonsingular if and only if

Let G be any graph with a pendant path Pn, where n is even. Then,

We prove the result using induction on n. For n=2, By a suitable reordering of the vertices, the adjacency matrix A(G) can be written as the follows.

As row and column operations do not change rank, it is clear that r(G)=r(M)=r(G∖P2)+2. Assume that the result holds for any even n≥2. Now consider a G with a pendant path Pn+2. Assume that v1 is the pendant vertex (other than the coalesced vertex) of Pn+2 and v2 is its adjacent vertex. Let ev1v2 be the edge between v1,v2. Then the adjacency matrix

is converted to following matrix by elementary row and column operations.

A related observation is:

Let G have a pendant edge e. Then

Without loss of generality let e={u,v} be the pendant edge with v the cut-vertex. Then,

Compute the determinant by the first row, and then the first column of the resulting minor. ∎

Let G1 and G2 be two graphs. Let G be the graph obtained by adding a path Pn between a vertex v1 of G1 and a vertex v2 of G2. Then

Combining that with Lemma 1.1 applied to the coalescence of G′′1 and G′′2 yields

First, consider a graph Krn. In general Krn is always nonsingular for n≥2,r≤n−1. We prove it in two ways. The first proof is by induction. The second proof (alternative proof) generalizes the result by giving a necessary and sufficient condition for Krn to be nonsingular.

We prove the result by induction on n. Note that any matrix corresponding to a Krn,n≥2,r≤n−1, can be obtained on replacing n−1 diagonal entries of A(Kn) by weights less than 1. Consider Kr2,r≤1. Without loss of generality let us replace the first diagonal entry of A(K2) by x1<1. Then the matrix

with weights xi, i=1,…,n−1, as the first n−1 diagonal entries. As Kr−1n,r≤n is nonsingular by assumption, j is linearly dependent on the columns of A(Kr−1n). Let us write j as the linear combination of the columns 1,2,…,n of A(Kr−1n), with the coefficient α1,α2,…,αn, respectively. Then,

From the top n−1 equations we have

We now provide an alternative proof of Lemma 2.1.

Alternative proof of Lemma 2.1: Consider the complete graph Kn. Let us add a loop of weight xi on the i-th vertex of Kn,xi≠1,i=1,…,n. The matrix corresponding to the resulting graph can be written as J−D, where D=diag(d1,…,dn) is a diagonal matrix, di=1−xi,i=1,…,n. So

Thus if J−D is invertible, where di=1−xi, then by the above,

where matrix M=J−D is nonsingular and α is some arbitrary number. Then,

In these cases, since α<1, A is nonsingular.

Let G be a graph with possible loops on the vertices. Let B=Krn, n≥3,r≤n−1 be a pendant block of G with at least one noncut-vertex without loop. Let v be the only cut-vertex of B, and suppose v has a loop of weight α. Then there exists γ<−1 such that

where G⋆∖(B∖v)=G∖(B∖v), except for the weight of the loop at v, which is α+γ.

With suitable reordering of the vertices the adjacency matrix of G can be written as the follows.

Since B∖v=Kr−1n−1,n−1≥2,r−1≤n−2, by Lemma 2.1 B∖v is nonsingular. Thus, by elementary operations on the columns and rows corresponding to A(B), A(G) can be converted to the following matrix

We now define a class of K2-forbidden block graphs.

An example of B31-block graph is given in Figure 0(a).

Any B31-block graph G is nonsingular. Moreover, every graph G′ obtained from a B31 block graph by adding loops of weights less than 1 to some vertices, except for at least one noncut-vertex from each block, is also nonsingular.

We prove that every G′ obtained from B31-block graph G as described in the theorem is nonsingular by induction on the number of blocks in G, k. When k=1 the result is true by Lemma 2.1. Suppose that the result holds for any G′ with k blocks. Now consider a G′ with k+1 blocks. Let B=Krn,n≥3,r≤n−1, be a pendant block in G′ with a loop of weight α<1 at the cut-vertex v. Then we can write

After elementary operations on the first n rows and columns A(G′) can be converted to the following matrix.

We give an alternative proof that any B31-block graph is nonsingular. Let us first recall a determinant formula for the block graphs.

where the summation is over all k-tuples (α1…αk) of nonnegative integers satisfying the following conditions:

where GS denotes the subgraph of G induced by the blocks Bi,i∈S.

Alternative proof: As in a B31-block graph G each block has order at least 3 and has at least one noncut-vertex, αi≥1,i=1,…k for any k-tuple (α1…αk) that satisfies 1 and 2. Thus using Equation (6), the product terms inside the summation are either zero or positive. This implies that G is nonsingular if there exists a k-tuple (α1…αk), whose product term is positive, that is, αi>1,i=1,…k. We claim the following.

We present the following conjecture on the nullity of K2-forbidden block graphs.

Let G be a connected block graph where each block is of order at least 3. Then the nullity of G is at most 1.

In this section, we consider K2-allowed block graphs, that is, now some blocks may be edges. We also present some K2-forbidden block graphs, which are nonsingular and are not B31-block graphs.

Let G be an (n,m,k)-block graph. Using Lemma 2.2 and (5) successively on the pendant blocks, we have

Let us slightly generalize (n,m,k)-block graphs to give another family of nonsingular block graphs.

Let G be block graph consisting of a block Kn,n≥2, to which at each vertex i=1,…,n, ki blocks of order mi>2 are attached. If

then G is nonsingular.

where M=−D+A(Kn),D is the diagonal matrix with i-th diagonal entry equals to (mi−1mi−2)ki. If

More generally, by the alternative proof of Lemma 2.1, we get the following.

Let G be a block graph consisting of a block Kn,n≥2, to which at each vertex i=1,…,n, ki blocks of orders mi1,…,miki each greater than 2 are attached. Then G is nonsingular if and only if