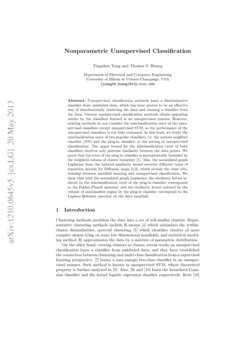 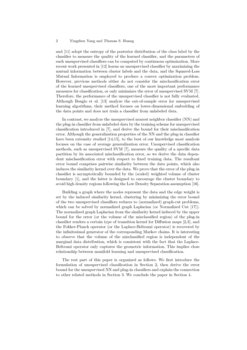 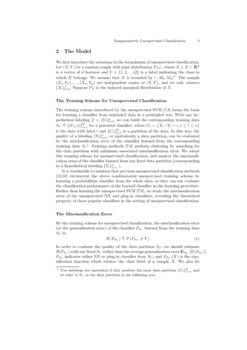 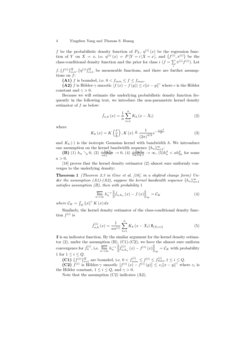 [5] which identifies clusters of more complex shapes lying on some low dimensional manifolds, and statistical modeling method [6] approximates the data by a mixture of parametric distribution.

On the other hand, viewing clusters as classes, recent works on unsupervised classification learn a classifier from unlabeled data, and they have established the connection between clustering and multi-class classification from a supervised learning perspective.

[7] learns a max-margin two-class classifier in an unsupervised manner. Such method is known as unsupervised SVM, whose theoretical property is further analyzed in [8]. Also, [9] and [10]

analyze the out-of-sample error for unsupervised learning algorithms, their method focuses on lower-dimensional embedding of the data points and does not train a classifier from unlabeled data.

Building a graph where the nodes represent the data and the edge weight is set by the induced similarity kernel, clustering by minimizing the error bound of the two unsupervised classifiers reduces to (normalized) graph-cut problems, which can be solved by normalized graph Laplacian (or Normalized Cut [17]). The normalized graph Laplacian from the similarity kernel induced by the upper bound for the error (or the volume of the misclassified region) of the plug-in classifier renders a certain type of transition kernel for Diffusion maps [2, 3]

, and the Fokker-Planck operator (or the Laplace-Beltrami operator) is recovered by the infinitesimal generator of the corresponding Markov chains. It is interesting to observe that the volume of the misclassified region is independent of the marginal data distribution, which is consistent with the fact that the Laplace-Beltrami operator only captures the geometric information. This implies close relationship between manifold learning and unsupervised classification.

The rest part of this paper is organized as follows. We first introduce the formulation of unsupervised classification in Section 2, then derive the error bound for the unsupervised NN and plug-in classifiers and explain the connection to other related methods in Section 3. We conclude the paper in Section 4.

We first introduce the notations in the formulation of unsupervised classification. Let (X,Y)

be a random couple with joint distribution

is a vector of

The Training Scheme for Unsupervised Classification

In order to evaluate the quality of the data partition SC

R(FSC) with any fixed SC rather than the average generalization error IESC[R(FSC)]. FSC indicates either NN or plug-in classifier from SC, and FSC(X) is the classification function which returns the class label of a sample X. We also let f be the probabilistic density function of PX, η(i)(x) be the regression function of Y on X=x, i.e. η(i)(x)=P[Y=i|X=x], and (f(i),π(i)) be the class-conditional density function and the prior for class i (f=∑iπ(i)f(i)). Let f,{f(i)}Qi=1,{η(i)}Qi=1 be measurable functions, and there are further assumptions on f:

Because we will estimate the underlying probabilistic density function frequently in the following text, we introduce the non-parametric kernel density estimator of

and Kh(⋅) is the isotropic Gaussian kernel with bandwidth h. We introuduce one assumption on the kernel bandwidth sequence {hn}∞n=1:

[18] proves that the kernel density estimator (2) almost sure uniformly converges to the underlying density:

satisfies assumption (B), then with probability

Similarly, the kernel density estimator of the class-conditional density function f(i) is

Note that the assumption (C2) indicates (A2).

We prove the error bound for the unsupervised NN and plug-in classifiers, and then show the connection to other related methods in this section.

Since the NN rule makes hard decision for a given datum, we introduce the following soft NN cost function which converges to the NN classification function, similar to the one adopted by Neighbourhood Components Analysis [19]:

The soft NN cost function is defined as

where ^NNSC,h∗(x,i) represents the probability that the datum x is assigned to class i by the soft NN rule ^NNSC,h∗ learned from S.

Then we have the misclassification error of the soft NN:

The misclassification error of the soft NN is given by

Lemma 1 can be proved by the definition of misclassification error. Lemma 2 shows that, with a large probability, the error of the soft NN (7) is bounded. To facilitate our analysis, we introduce the cover of X as below:

Under the assumption (A1), (C1)-(C2), suppose the kernel bandwidth sequence {hn}∞n=1 satisfies assumption (B), then with probability greater than 1−2Le−Mh∗ the misclassification error of the soft NN, i.e. R(^NNSC,h∗), satisfies:

where T(x)≜n∑l=1Kh∗(x−Xl)n. By the union bound, the probability that the above event happens for {ˆxr}Lr=1 is less than 2Le−Mh∗. It follows that with probability greater than 1−2Le−Mh∗,

where ^fn,hn is the kernel density estimator defined by (2) with kernel bandwidth sequence {hn} under the assumption (B), θlm=1I{Yl≠Ym} is a class indicator function such that θlm=1 if Xl and Xm belongs to different classes, and 0 otherwise.

Next we will derive the misclassification error of the unsupervised plug-in classifier, that is, the classifier with the form

where ^η(i)n is a nonparametric estimator of the regression function η(i), and we choose

Let F∗ be the Bayesian classifier which is a minimizer of the misclassification error of all classifiers, and F∗(X)=argmax1≤i≤Qη(i)(X). Due to the almost sure uniform convergence of the kernel density estimator ^f(i)n,hn and ^fn,hn under the assumption (A1), (B), (C1)-(C2), ^η(i)n converges almost sure uniformly to η(i), and FPIn converges to the Bayesian classifier F∗ : limn→∞FPIn=F∗. It follows that limn→∞R(FPIn)=R(F∗) by the dominant convergence theorem. It is also known that the excess risk of FPIn, namely IER(FPIn)−R(F∗), converges to 0 of the order n−β2β+d under some complexity assumption on the class of the regression functions Σ with smooth parameter β that {η(i)} belongs to [20, 15]. Again, this result deals with the average generalization error and cannot be applied to deriving the data dependent misclassification error of unsupervised classification with fixed training data in our setting.

Similar to Lemma 1, it can be verified that

We then give the upper bound for the misclassification error of FPIn in Lemma 3.

Under the assumption (A1), (B), (C1)-(C2), the asymptotic misclassification error of the plug-in classifier FPIn satisfies

where {η(i)}Qi=1 is the regression functions, and this bound is tight.

Based on Lemma 3, we can bound the error of the plug-in classifier from above by RPIn. In order to estimate the error bound RPIn, we introduce the following generalized kernel density estimator:

Suppose f is a probabilistic density function on X⊂[−M0,M0]d that satisfies assumption (A1)-(A2). {Xl}Nl=1 are drawn i.i.d. according to f. Let g be a Hölder-γ smooth continuous function defined on X with Hölder constant g0, and g is bounded, i.e. 0<gmin≤g≤gmax. Let e=fg. Define the generalized kernel density estimator of e as

When the kernel bandwidth sequence {hn}∞n=1 satisfies assumption (B), then the estimator ^en,hn converges to e almost sure uniformly, i.e. with probability 1,

Define the class of functions on the measurable space (H,H):

It is shown in [18, 21] that F is a bounded VC class of measurable functions with respect to the envelope F such that |u|≤F for any u∈F. Therefore, there exist positive numbers A and v such that for every probability measure P on (H,H) for which ∫F2dP<∞ and any 0<τ<1,

We choose the envelope function for Fg as Fg=Fgmin and ∣∣ug∣∣≤Fg for any ug∈Fg, then

So that Fg is also a bounded VC class. By similar arguement in the proof of Theorem 1, we can obtain (26). ∎

where θlm=1I{Yl≠Ym} is a class indicator function and

for any kernel bandwidth sequence {hn}∞n=1 that satisfies assumption (B).