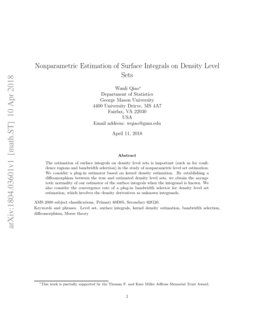 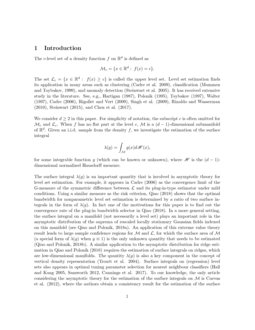 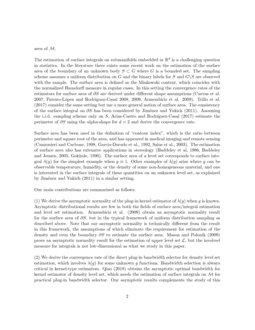 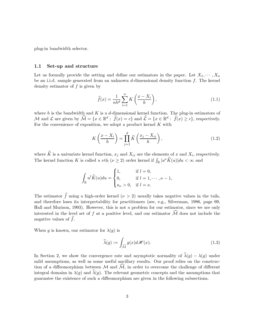 We consider d≥2 in this paper. For simplicity of notation, the subscript c is often omitted for Mc and Lc. When f has no flat part at the level c, M is a (d−1)-dimensional submanifold of Rd. Given an i.i.d. sample from the density f, we investigate the estimation of the surface integral

for some integrable function g (which can be known or unknown), where H is the (d−1)-dimensional normalized Hausdorff measure.

The surface integral λ(g) is an important quantity that is involved in asymptotic theory for level set estimation. For example, it appears in Cadre (2006) as the convergence limit of the G-measure of the symmetric difference between L and its plug-in-type estimator under mild conditions. Using a similar measure as the risk criterion, Qiao (2018) shows that the optimal bandwidth for nonparametric level set estimation is determined by a ratio of two surface integrals in the form of λ(g). In fact one of the motivations for this paper is to find out the convergence rate of the plug-in bandwidth selector in Qiao (2018). In a more general setting, the surface integral on a manifold (not necessarily a level set) plays an important role in the asymptotic distribution of the suprema of rescaled locally stationary Gaussian fields indexed on this manifold (see Qiao and Polonik, 2018a). An application of this extreme value theory result leads to large sample confidence regions for M and L, for which the surface area of M (a special form of λ(g) when g≡1) is the only unknown quantity that needs to be estimated (Qiao and Polonik, 2018b). A similar application to the asymptotic distribution for ridge estimation in Qiao and Polonik (2016) requires the estimation of surface integrals on ridges, which are low-dimensional manifolds. The quantity λ(g)

is also a key component in the concept of vertical density representation (Troutt et al. 2004). Surface integrals on (regression) level sets also appears in optimal tuning parameter selection for nearest neighbour classifiers (Hall and Kang 2005, Samworth 2012, Cannings et al. 2017). To our knowledge, the only article considering the asymptotic theory for the estimation of the surface integrals on

M is Cuevas et al. (2012), where the authors obtain a consistency result for the estimation of the surface area of M.

The estimation of surface integrals on submanifolds embedded in Rd is a challenging question in statistics. In the literature there exists some recent work on the estimation of the surface area of the boundary of an unknown body S⊂G where G

is a bounded set. The sampling scheme assumes a uniform distribution on

G and the binary labels for S and G∖S are observed with the sample. The surface area is defined as the Minkowski content, which coincides with the normalized Hausdorff measure in regular cases. In this setting the convergence rates of the estimators for surface area of ∂S are derived under different shape assumptions (Cuevas et al. 2007, Pateiro-López and Rodríguez-Casal 2008, 2009, Armendáriz et al. 2009). Trillo et al. (2017) consider the same setting but use a more general notion of surface area. The consistency of the surface integral on ∂S has been considered by Jiménez and Yukich (2011). Assuming the i.i.d. sampling scheme only on S, Arias-Castro and Rodríguez-Casal (2017) estimate the perimeter of ∂S using the alpha-shape for d=2 and derive the convergence rate.

Surface area has been used in the definition of “contour index”, which is the ratio between perimeter and square root of the area, and has appeared in medical imaging and remote sensing (Canzonieri and Carbone, 1998, Garcia-Dorado et al., 1992, Salas et al., 2003). The estimation of surface area also has extensive applications in stereology (Baddeley et al, 1986, Baddeley and Jensen, 2005, Gokhale, 1990). The surface area of a level set corresponds to surface integral λ(g) for the simplest example when g≡1. Other examples of λ(g) arise where g can be observable temperature, humidity, or the density of some non-homogeneous material, and one is interested in the surface integrals of these quantities on an unknown level set, as explained by Jiménez and Yukich (2011) in a similar setting.

Our main contributions are summarized as follows.

Let us formally provide the setting and define our estimators in the paper. Let X1,⋯,Xn be an i.i.d. sample generated from an unknown d-dimensional density function f. The kernel density estimator of f is given by

where h is the bandwidth and K is a d-dimensional kernel function. The plug-in estimators of M and L are given by ˆM={x∈Rd:ˆf(x)=c} and ˆL={x∈Rd:ˆf(x)≥c}, respectively. For the convenience of exposition, we adopt a product kernel K with

where ˜K is a univariate kernel function, xj and Xij are the elements of x and Xi, respectively. The kernel function K is called a νth (ν≥2) order kernel if ∫R|uν˜K(u)|du<∞ and

The estimator ˆf using a high-order kernel (ν>2) usually takes negative values in the tails, and therefore loses its interpretability for practitioners (see, e.g., Silverman, 1986, page 69, Hall and Murison, 1993). However, this is not a problem for our estimator, since we are only interested in the level set of f at a positive level, and our estimator ˆM does not include the negative values of ˆf.

When g is known, our estimator for λ(g) is

In Section 2, we show the convergence rate and asymptotic normality of ˆλ(g)−λ(g) under mild assumptions, as well as some useful ancillary results. Our proof relies on the construction of a diffeomorphism between M and ˆM, in order to overcome the challenge of different integral domains in λ(g) and ˆλ(g). The relevant geometric concepts and the assumptions that guarantee the existence of such a diffeomorphism are given in the following subsections.

It is well-known that bandwidth selection is very important for kernel-type estimators, such as ˆM and ˆL. It turns out that the bandwidth selection for level set estimation also requires estimation of the surface integral λ(g). Let LΔˆL=(L∖ˆL)∪(ˆL∖L), which is the symmetric difference between L and ˆL. Integrals defined on LΔˆL are usually used to measure the dissimilarity between L and ˆL (or between M and ˆM). See, e.g., Baíllo et al. (2000), Baíllo (2003), Cadre (2006), Cuevas et al. (2006), and Mason and Polonik (2009). Using E∫LΔˆL|f(x)−c|dx as the risk function, Qiao (2018) showed that the asymptotic optimal bandwidth for ˆf depends on λ(g1)/λ(g2), where g1 and g2 are some algebraic functions of the first two derivatives of f. Let ˆg1 and ˆg2 be the plug-in estimators of g1 and g2. The direct plug-in bandwidth selector is then ˆλ(ˆg1)/ˆλ(ˆg2). In Section 3, we show the convergence rate of ˆλ(ˆg1)/ˆλ(ˆg2)−λ(g1)/λ(g2). The proofs of all the results in Sections 2 and 3 are left to Section 4. The appendix contains discussions on one of the technical assumptions.

For any x∈Rd and A⊂Rd, let d(x,A)=infy∈A∥x−y∥. The Hausdorff distance between any two sets A,B⊂Rd is

We will also use the concept of reach of a manifold. For a set S⊂Rd, let Up(S) be the set of points x∈Rd such that πS(x) is unique. The reach of S is defined as

See Federer (1959). A positive reach is related to the concepts of “r-convexity” and “rolling condition”. See Cuevas et al. (2012). These are common regularity conditions for the estimation of surface area. For two manifolds A and B, if the normal projections πA:B↦A and πB:A↦B are homeomorphisms, then A and B are called normal compatible (see Chazal et al. (2007)).

1.3 Assumptions and their discussion

(F2) We assume that M consists of N connected components, i.e., M=⋃Nj=1Mj, where Mj, j=1,⋯,N, are (d−1)-dimensional connected manifolds such that inf1≤j≠k≤NdH(Mj,Mk)>0. We further assume that for j=1,⋯,N, Mj is parameterized by ψj on Ωj which is a bounded Lebesgue measurable subset of Rd−1, such that the (d−1)-dimensional Lebesgue measure of ∂Ωj is zero, and ψj is injective on Ωoj, which is the interior of Ωj. Denoting the Jacobian matrix of ψj as Bj and Jj=BTjBj, we require that Bj is continuous and bounded such that

Discussion of the assumptions:

2. Assumption (F2) is used in the derivation of the asymptotic normality of the surface integral estimator. An assumption similar to (F2) appears in Mason and Polonik (2009), where for j=1,⋯,N, they take

It is known (e.g. see Lang, 1997) that the unit (d−1)-sphere Sd−1={x∈Rd:∥x∥=1} can be parameterized with Ω. Mason and Polonik (2009) assume the existence of diffeomorphisms between Mj and Sd−1 for the construction of the parameterization ψj, for j=1,⋯,N.

The diffeomorphisms between Mj and Sd−1 can be constructed under mild conditions using Morse theory (Milnor, 1963). For τ∈R, let Mτ=⋃N(τ)j=1Mjτ, where Mjτ are the connected components of f−1(τ). When Mjτ is within a small neighborhood of a non-degenerate local maximum (or minimum), Mjτ is diffeomorphic to Sd−1 (Lemma 2.25 in Nicolaescu, 2011). If no critical points exist between Mjc and Mjτ, then they are differomorphic via Φτ−c(x), where Φt(x)=γx(t) is a gradient flow satisfying

See Theorem 2.6 in Nicolaescu (2011). This simply means Mjc is diffeomorphic to Sd−1 and the parameterization ψj on Ω can be constructed accordingly. If there exist one or more critical points between Mjc and Mjτ, further discussion can be found in the appendix based on Morse theory.

We first consider the case that the integrand g is a known function. The following theorem includes the convergence rate and asymptotic normality for ˆλ(g)−λ(g).

Let g:Rd↦R be a function with bounded continuous second order derivatives. Under assumptions (K1), (F1), (F2) and (H1), we have (i)

The following lemma shows results related to the geometric concepts introduced in Subsection 1.2 for level sets. It is similar to Lemma 1 in Chen et al. (2017), but our result is under slightly different assumptions and holds uniformly for a collection of density level sets. Also see Theorems 1 and 2 in Walther (1997) for relevant results.

Note that {ζx(t):t∈R} is orthogonal to the tangent space of M at x. Furthermore, let

Let (ψ,Ω) be one of the pairs (ψj,Ωj), j=1,⋯,N defined in assumption (F2). The following proposition establishes the asymptotic normality theory corresponding to description in the remark after Theorem 2.1. In particular, the rate √nh3 in (2.8) has been heuristically explained and the rate √nh in (2.9) follows a similar justification.

be a vector function with bounded continuous first derivatives. If

Similarly, let v:Ω↦R be a bounded continuous function. If nh→∞, then

So far we assume the integrand g is known. In the next section we will consider some cases when g is unknown and has to be estimated. In particular our study is in the context of convergence rate of the bandwidth selection for density level set estimation, for which g is a functional of the derivatives of f.

Bandwidth selection for nonparametric estimation of density level sets is considered by Qiao (2018), where he uses the following excess risk as the criterion of bandwidth selection and shows that under regularity conditions,

Individual bandwidth for each dimension is used in Qiao (2018). For expositional simplicity we use a single bandwidth for all the dimensions. However, the rates obtained in this section also carry through for the case of bandwidth vector. Following standard computation from (3.1), we have

The asymptotic optimal bandwidth which minimizes ˜m(h) is

The plug-in bandwidth selector is

Note that ˆhopt minimizes the estimated risk function ˆm(h)=κ2νh2ν(ν!)2∑1≤k,l≤dˆakl(f)+cˆb(f)∥K∥22nhd. Three different pilot bandwidths h0, h1 and h2 are allowed for the estimators ˆM, ∥∇ˆf∥−1 and ˆf(k∗ν)ˆf(l∗ν), respectively. It is suggested in Qiao (2018) that the direct plugin bandwidths for the kernel density and its first two derivatives are used as the pilot bandwidths, which are of the orders of n−1/(d+2ν), n−1/(d+2+2ν) and n−1/(d+4+2ν), respectively (see, e.g., Wand and Jones, 1995). In the following theorem we compare the plug-in optimal bandwidth ˆhopt with the asymptotic optimal bandwidth ˜hopt. For sequences an,bn∈R, we denote an≍bn if 0<liminfn→∞|an/bn|≤limsupn→∞|an/bn|<∞.

The remaining part of this section is denoted to some ancillary results used to prove the above theorem. When comparing ˆhopt and ˜hopt, we need to study the asymptotic performance of ˆb(f)−b(f) and ˆakl(f)−akl(f), 1≤k,l≤d, which further depend on some specific forms of the following quantities with a generic function g and random function gn, in addition to ˆλ(g)−λ(g) which is studied in Theorem 2.1. Define

The following theorem gives an asymptotic result for D(0)gn,n in (3.8).