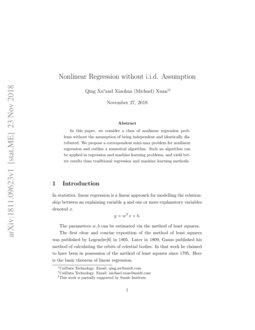 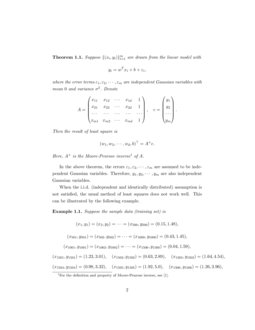 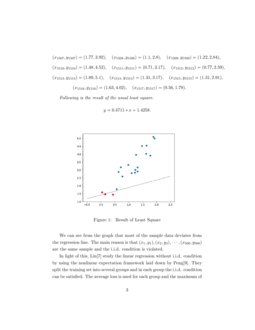 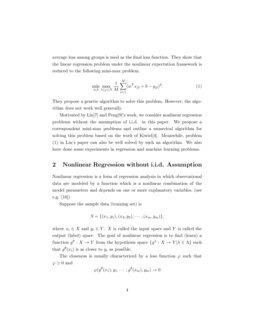 Pitch detection is a fundamental problem in speech processing as F0 is u...
Thomas Drugman, et al. ∙

Towards out of distribution generalization for problems in mechanics

There has been a massive increase in research interest towards applying ...
Lingxiao Yuan, et al. ∙

In statistics, linear regression is a linear approach for modelling the relationship between an explaining variable

y and one or more explanatory variables denoted x.

can be estimated via the method of least squares.

Suppose {(xi,yi)}mi=1 are drawn from the linear model with

where the error terms ε1,ε2,⋯,εm are independent Gaussian variables with mean 0

Then the result of least square is

When the i.i.d. (independent and identically distributed) assumption is not satisfied, the usual method of least squares does not work well. This can be illustrated by the following example.

Following is the result of the usual least square.

We can see from the graph that most of the sample data deviates from the regression line. The main reason is that (x1,y1),(x2,y2),⋯,(x500,y500) are the same sample and the i.i.d. condition is violated.

In light of this, Lin[7] study the linear regression without i.i.d. condition by using the nonlinear expectation framework laid down by Peng[9]

. They split the training set into several groups and in each group the i.i.d. condition can be satisfied. The average loss is used for each group and the maximum of average loss among groups is used as the final loss function. They show that the linear regression problem under the nonlinear expectation framework is reduced to the following mini-max problem.

They propose a genetic algorithm to solve this problem. However, the algorithm does not work well generally.

Motivated by Lin[7] and Peng[9]’s work, we consider nonlinear regression problems without the assumption of i.i.d. in this paper. We propose a correspondent mini-max problems and outline a numerical algorithm for solving this problem based on the work of Kiwiel[4]. Meanwhile, problem (1) in Lin’s paper can also be well solved by such an algorithm. We also have done some experiments in regression and machine learning problems.

Nonlinear regression is a form of regression analysis in which observational data are modeled by a function which is a nonlinear combination of the model parameters and depends on one or more explanatory variables. (see e.g.

where xi∈X and yi∈Y. X is called the input space and Y is called the output (label) space. The goal of nonlinear regression is to find (learn) a function gθ:X→Y from the hypothesis space {gλ:X→Y|λ∈Λ} such that gθ(xi) is as closer to yi as possible.

if and only if

Then the learning problem is reduced to an optimization problem of minimizing φ.

Following are two kinds of loss functions, namely, the average loss and the maximal loss.

The average loss is popular, particularly in machine learning, since it can be conveniently minimized using online algorithms, which process few instances at each iteration. The idea behinds the average loss is to learn a function that performs equally well for each training point. However, when the i.i.d. assumption is not satisfied, the average loss way may become a problem.

To overcome this difficulty, we use the max-mean as the loss function. First, we split the training set into several groups and in each group the i.i.d. condition can be satisfied. Then the average loss is used for each group and the maximum of average loss among groups is used as the final loss function. We propose the following mini-max problem for nonlinear regression problem.

Here, nj is the number of samples in group j.

Problem (2) is a generalization of problem (1). Next, we will give a numerical algorithm which solves problem (2).

Peng and Jin[2] put forward a max-mean method to give the parameter estimation when the usual i.i.d. condition is not satisfied. They show that if Z1,Z2,⋯,Zk are drawn from the maximal distribution M[μ––,¯¯¯μ]

and are nonlinearly independent, then the optimal unbiased estimation for

This fact, combined with the Law of Large Numbers (Theorem 19 in

[2]) leads to the max-mean estimation of μ. We borrow this idea and use the max-mean as the loss function for the nonlinear regression problem.

Here, h is continuous on Rn×V and differentiable with respect to u. V is a compact subset of Rd.

Kiwiel linearized h at each iterative point uk and obtain the convex approximation for u↦maxv∈Vh(u,v) as

In general, ^h is not strictly convex with respect to u, thus may not admit a minimum. To overcome this difficulty, he added a regularization term and the minimization problem is reduced to

It can be converted to the following form

By duality theory, the above problem is further transformed into

Denote fj(u)=h(u,j) and we give a numerical algorithm for the following mini-max problem.

Suppose each fj is differentiable with respect to u and denote

Example 1.1 can be numerically well solved by the above algorithm with

The corresponding optimization problem is

The numerical result using the algorithm in section 3 is

The following picture summarize the result. It can be seen that the method using maximal loss function (black line) performs better than the traditional least square method (pink line).

In this case, we use the MNIST database

of handwritten digits to perform the experiment. Many machine learning models cater to the identification of handwritten digits. We use the multi-layer perception model. Three hidden layers along with an input layer and an output layer are used. The number of neurons in each layer is 784,50,20,12,10, respectively.

The training data is chosen as follows. Firstly, we choose 1000 training data and split them randomly into 10 groups, named G1,G2,⋯,G10. Each group has 100 i.i.d. samples. Then we set

Two different method are applied. One is using the average group loss

The other is using the maximal group loss

In this experiment, the whole training set is not i.i.d.. On the other hand, each subgroup is i.i.d.. It turns out that the method using maximal loss performs better than the method using average loss. In the last 20 years, deep learning using many more hidden layers and other machine learning algorithm has achieved accuracy over

90% in the handwriting recognition and other problems. However, we think that the method in this paper can also improve the performance when the training set is not i.i.d..

The authors would thank Professor Shige Peng for useful discussions.