It has been recently shown that a large class of balanced graph cuts allows for an exact relaxation into a nonlinear eigenproblem. We review briefly some of these results and propose a family of algorithms to compute nonlinear eigenvectors which encompasses previous work as special cases. We provide a detailed analysis of the properties and the convergence behavior of these algorithms and then discuss their application in the area of balanced graph cuts. 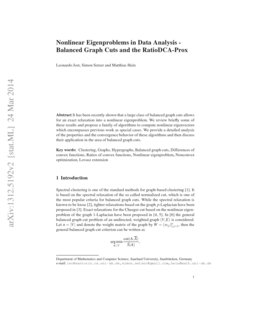 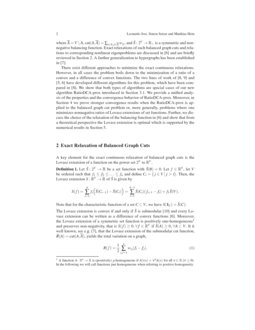 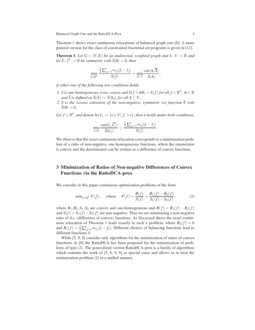 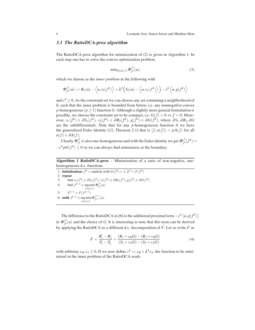 where ¯¯¯¯A=V∖A, cut(A,¯¯¯¯A)=∑i∈A,j∈¯¯¯¯Awij, and ^S:2V→R+ is a symmetric and nonnegative balancing function. Exact relaxations of such balanced graph cuts and relations to corresponding nonlinear eigenproblems are discussed in Jost_Setzer_Hein:HeiSet2011 and are briefly reviewed in Section 2. A further generalization to hypergraphs has been established in Jost_Setzer_Hein:HeiSet2013 .

A key element for the exact continuous relaxation of balanced graph cuts is the Lovasz extension of a function on the power set 2V to RV.

Note that for the characteristic function of a set

Theorem 2.1 shows exact continuous relaxations of balanced graph cuts Jost_Setzer_Hein:HeiSet2011 . A more general version for the class of constrained fractional set programs is given in Jost_Setzer_Hein:BueEtAl2013 .

if either one of the following two conditions holds

Let f∈RV and denote by Ct:={i∈V|fi>t}, then it holds under both conditions,

We observe that the exact continuous relaxation corresponds to a minimization problem of a ratio of non-negative, one-homogeneous functions, where the enumerator is convex and the denominator can be written as a difference of convex functions.

We consider in this paper continuous optimization problems of the form

where R1,R2,S1,S2 are convex and one-homogeneous and R(f)=R1(f)−R2(f) and S(f)=S1(f)−S2(f) are non-negative. Thus we are minimizing a non-negative ratio of d.c. (difference of convex) functions. As discussed above the exact continuous relaxation of Theorem 2.1 leads exactly to such a problem, where R2(f)=0 and R1(f)=12∑ni,j=1wij|fi−fj|. Different choices of balancing functions lead to different functions S.

The RatioDCA-prox algorithm for minimization of (2) is given in Algorithm 1. In each step one has to solve the convex optimization problem

which we denote as the inner problem in the following with

and ck≥0. As the constraint set we can choose any set containing a neighborhood of 0, such that the inner problem is bounded from below, i.e. any nonnegative convex p-homogeneous (p≥1) function G. Although a slightly more general formulation is possible, we choose the constraint set to be compact, i.e. G(f)=0⇔f=0. Moreover, s1(fk)∈∂S1(fk), r2(fk)∈∂R2(fk), g(fk)∈∂G(fk), where ∂S1,∂R2,∂G are the subdifferentials. Note that for any p-homogeneous function A we have the generalized Euler identity (Jost_Setzer_Hein:YanWei08, , Theorem 2.1) that is ⟨f,a(f)⟩=pA(f) for all a(f)∈∂A(f).

Clearly Φckfk is also one-homogeneous and with the Euler identity we get Φckfk(fk)=−ckpG(fk)≤0 so we can always find minimizers at the boundary.

The difference to the RatioDCA in Jost_Setzer_Hein:HeiSet2011 is the additional proximal term −ck⟨u,g(fk)⟩ in Φckfk(u) and the choice of G. It is interesting to note that this term can be derived by applying the RatioDCA to a different d.c. decomposition of F. Let us write F as

with arbitrary cR,cS≥0. If we now define ck:=cR+λkcS, the function to be minimized in the inner problem of the RatioDCA reads

which is not necessarily one-homogeneous anymore. The following lemma implies that the minimizers of the inner problem of RatioDCA-prox and of RatioDCA applied to the d.c.-decomposition (4) can be chosen to be the same.

Note that G(fk)=1 is no restriction since we get from the one-homogeneity of Φckfk that G(fk)=1 for all k. The following lemma verifies the intuition that the strength of the proximal term of RatioDCA-prox controls in some sense how near successive iterates are.

As all proofs can be split up into the individual steps we may choose different functions G in every step of the algorithm. Moreover, it will not be necessary that fk+1 is an exact minimizer of the inner problem, but we will only use that Φckfk(fk+1)<Φckfk(fk).

It is easy to see that we get for ck=0 and G=∥⋅∥2 the RatioDCA Jost_Setzer_Hein:HeiSet2011 as a special case of the RatioDCA-prox. Moreover, Lemma 1 shows that the RatioDCA-prox corresponds to the RatioDCA with a general constraint set for the d.c. decomposition of the ratio F given in (4).

produce the same sequence if given the same initialization.

If f0=~f0, mean(f0)=0, c>0 and one uses the same subgradients in each step then, for the sequence ~fk produced by algorithm 1 of Jost_Setzer_Hein:BLUB12 and fk produced by RatioDCA-prox with ck=λk2c and G(u)=∥u∥22, we have ~fk=fk for all k.

and for the algorithm 1 of Jost_Setzer_Hein:BLUB12

Analogously, the algorithm presented in Jost_Setzer_Hein:BLUB2012 is a special case of RatioDCA-prox applied to the ratio cheeger cut where R(u)=R1(u)=∑i,jwij|ui−uj| and S(u)=S1(u)=∑i|ui−median(u)|.

For every nonnegative sequence ck any sequence fk produced by RatioDCA-prox satisfies F(fk+1)<F(fk) for all k≥0 or the sequence terminates. Moreover, we get that ck⟨fk+1−fk,g(fk)⟩→0.

where we used that for any one-homogeneous convex function A we have for all f,g∈RV and all a∈∂A(g)

where we used that since G is convex

Dividing (5) by S(fk+1) gives F(fk+1)<F(fk). As the sequence F(fk) is bounded from below and monotonically decreasing and thus converging and S(fk+1) is bounded on the constraint set, we get the convergence result from

If G is strictly convex and ck≥γ>0 for all k, then any sequence fk produced by RatioDCA-prox fulfills ∥fk+1−fk∥2→0.

which is a contradiction to the strict convexity of G as for 0<t<1,

Thus with the compactness of Gϵ we get

While the previous result does not establish convergence of the sequence, it establishes that the set of accumulation points has to be connected.

As we are interested in minimizing the ratio F

we want to find vectors

where we have used that ⟨g(fk),h⟩≤G(h)−G(fk)+⟨fk,g(fk)⟩=⟨fk,g(fk)⟩. Further, if fk is a minimizer then the algorithm terminates. ∎

3.4 Choice of the constraint set and the proximal term

Then the following implications hold:

then by Lemma 1 also

fk1 being a global minimizer implies

The sequence F(fk) is not only monotonically decreasing but we also show now that the sequence fk converges to a generalized nonlinear eigenvector as introduced in Jost_Setzer_Hein:HeiBue2010 .

If for every f with G(f)=1 the subdifferential ∂G(f) is unique or ck=0 for all k, then f∗

is an eigenvector with eigenvalue

λ∗ in the sense that it fulfills

∎By Proposition 1 the sequence F(fk) is monotonically decreasing. By assumption S=S1−S2 and R=R1−R2 are nonnegative and hence F is bounded below by zero. Thus we have convergence towards a limit

Note that fk is contained in a compact set, which implies that there exists a subsequence fkj converging to some element f∗. As the sequence F(fkj) is a subsequence of a convergent sequence, it has to converge towards the same limit, hence also

which is a contradiction to the fact that the sequence F(fk) has converged to λ∗. Thus there exists c∗ such that f∗∈argminG(u)≤1{Φc∗f∗(u)} and by Lemma 1 then f∗∈argminu{Φc∗f∗(u)+c∗G(u)} and we get

which then implies that f∗ is an eigenvector of F with eigenvalue λ∗. ∎

4.1 Properties of the Lovasz extension

The following lemma is a reformulation of (Jost_Setzer_Hein:Bac2013, , Proposition 4.2(c)) for our purposes:

More generally this also holds if ^S is not submodular: