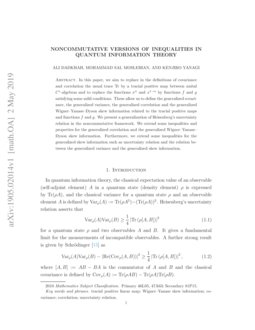 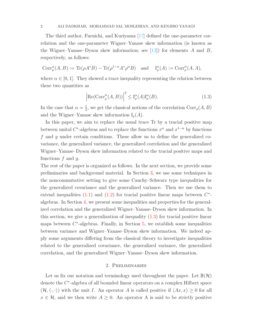 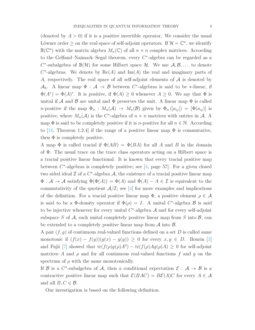 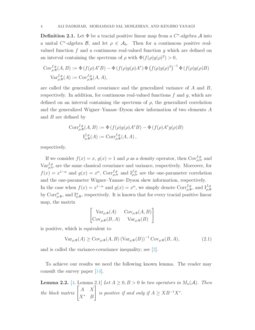 Information Inequalities via Submodularity and a Problem in Extremal Graph Theory

The present paper offers, in its first part, a unified approach for the ...
Igal Sason, et al. ∙

We propose a modified χ^β-divergence, give some of its properties, and s...
Jean-François Bercher, et al. ∙

The purpose of this paper is to construct a new class of discrete genera...
David M. Williams, et al. ∙

In quantum information theory, the classical expectation value of an observable (self-adjoint element) A in a quantum state (density element) ρ is defined by Tr(ρA), and the classical variance is expressed by Varρ(A):=Tr(ρA2)−(Tr(ρA))2. The Heisenberg uncertainty relation [5, 9] states that

where [A,B]:=AB−BA is the commutator of A and B and the classical covariance Covρ(A,B) of A and B is defined by Covρ(A,B):=Tr(ρAB)−Tr(ρA)Tr(ρB).

where α∈[0,1]. They showed a trace inequality representing the relation between these two quantities as

In the case that α=12, we get the classical notions of the correlation Corrρ(A,B) and the Wigner–Yanase skew information Iρ(A).

Let us fix our notation and terminology used throughout the paper. Let B(H) stand for the C∗-algebra of all bounded linear operators on a complex Hilbert space (H,⟨⋅,⋅⟩) with the unit I. An operator A is called positive if ⟨Ax,x⟩≥0 for all x∈H, and we then write A≥0. An operator A is said to be strictly positive (denoted by A>0) if it is a positive invertible operator. Let ≤ be the Löwner order on the self-adjoint part of B(H). In the case that H=Cn, B(Cn) is the same as the matrix algebra Mn(C) consist of all n×n complex matrices. Due to the Gelfand–Naimark–Segal theorem, every C∗-algebra can be regarded as a C∗-subalgebra of B(H) for some Hilbert space H. We use A,B,… to denote C∗-algebras. We denote by Re(A) and Im(A) the real and imaginary parts of A, respectively. The self-adjoint part of A is denoted by Ah. A linear map Φ:A→B between C∗-algebras is said to be ∗-linear, if Φ(A∗)=Φ(A)∗. It is positive, if Φ(A)≥0 whenever A≥0. We say that Φ is unital if A and B are unital and Φ preserves the unit. A linear map Φ is called n-positive if the induced map Φn:Mn(A)→Mn(B) given by Φn([aij])=[Φ(aij)] is positive, where Mn(A) is the C∗-algebra of n×n matrices with entries in A. If Φ is n-positive for every n∈N, then Φ is called completely positive. It is known that if the range of a positive linear map Φ is commutative, then Φ is completely positive; see [14, Theorem 1.2.4]. A map Φ is called tracial if Φ(AB)=Φ(BA) for all A and B in the domain of Φ. The usual trace on the trace class operators acting on a Hilbert space is a tracial positive linear functional. It is known that every tracial positive map between C∗-algebras is completely positive; see [3, page 57]. For a given closed two sided ideal I of a C∗-algebra A, the commutativity of the quotient A/I is equivalent to the existence of a tracial positive linear map Φ:A→A satisfying Φ(Φ(A))=Φ(A) and Φ(A)−A∈I; see [3] for more examples and implications of the definition. For a tracial positive linear map Φ, a positive element ρ∈A is said to be a Φ-density operator if Φ(ρ)=I. A unital C∗-algebra B is said to be injective whenever for every unital C∗-algebra A and for every self-adjoint subspace S of A, each unital completely positive linear map from S into B, can be extended to a completely positive linear map from A into B. A pair (f,g) of continuous real-valued functions defined on a set D is called same monotonic if (f(x)−f(y))(g(x)−g(y))≥0 for every x,y∈D. Bourin [2] and Fujii [6] showed that tr(f(ρ)g(ρ)A2)−tr(f(ρ)Ag(ρ)A)≥0 for self-adjoint matrices A and ρ and for all continuous real-valued functions f and g on the spectrum of ρ with the same monotonically. If B is a C∗-subalgebra of A, then a conditional expectation E:A→B is a contractive positive linear map such that E(BAC)=BE(A)C for every A∈A and all B,C∈B.

Our investigation is based on the following definition.

is positive, which is equivalent to

and is called the variance-covariance inequality; see [1].

To achieve our results we need the following known lemma. The reader may consult the survey paper [12].

For every tracial positive linear map Φ, the matrix

The positivity of the above matrix implies that

Hence, by employing Lemma 2.2, we get

Now, we are ready to give a generalization for Schrödinger’s uncertainty relation for a tracial positive linear map.

Let Φ be a tracial positive linear map from a C∗-algebra A into a unital C∗-algebra B, and let ρ∈Ah. If Φ(A) is a commutative subset of B, then the matrices

are positive for all A,B∈Ah, and all continuous positive real-valued functions f and g on the spectrum ρ with Φ(f(ρ)g(ρ)2)>0.

and an easy calculation shows that

Summing both sides of the above equalities, we get

By a continuity argument we can assume that Varf,gρ,Φ(B)>0 and by using Lemma 3.1, we conclude that

Now, Lemma 2.2 implies the positivity of the matrix

In addition, it follows from the commutativity of the range of Φ that

whence we arrive at the second inequality. ∎

Next, we aim to give a generalization of Heisenberg’s uncertainty relation for a tracial positive linear map between C∗-algebra. To get this result we need some lemmas.

[3, pages 59 – 60] Let A,B be C∗-algebras such that either one of them is W∗-algebra or B is an injective C∗-algebra. Let Φ:A⟶B be a tracial positive linear map. Then there exist a commutative C∗-algebra C(X) for some compact Hausdorff space X, tracial positive linear maps ϕ1:A⟶C(X), and ϕ2:C(X)⟶B such that Φ=ϕ2∘ϕ1. Moreover, in case that Φ is unital, then ϕ1 and ϕ2 can be chosen to be unital. In particular, Φ is completely positive.

Let Φ be a tracial positive linear map from a C∗-algebra A into a unital C∗-algebra B. Then

Let A be a C∗-algebra and B be a unital C∗-algebra such that either one of them is W∗-algebra or B is an injective C∗-algebra. If Φ:A⟶B is a tracial positive linear map and ρ∈Ah, then the matrix

is positive for all A,B∈Ah, and all continuous positive real-valued functions f and g on the spectrum ρ with Φ(f(ρ)g(ρ)2)>0.

According to Lemma 3.3 there exist a commutative C∗-algebra C(X) and tracial positive linear maps ϕ1:A⟶C(X) and ϕ2:C(X)⟶B such that Φ=ϕ2∘ϕ1. Hence, Proposition 3.2 ensures the positivity of the matrix

Since ϕ2 is two-positive, we get

4. Some properties of correlation

for each pair of same monotonic functions f and g defined on the spectrum of ρ∈Ah and each element A∈Ah. In particular, If,gρ,Φ(A)≥0.

Since ρ is self-adjoint, there exists a sequence of self-adjoint operators converging to ρ such that each term P of the sequence has the spectral representation P=∑ni=1λiEi, whenever λi, i=1,…,n are real numbers and Ei’s are mutually orthogonal projections with ∑ni=1Ei=I. Hence, we only need to prove inequality (4.1) for a such self-adjoint operator P=∑ni=1λiEi. First note that f(P)g(P)A2=∑ni=1f(λi)g(λi)EiA2. In addition,

Let Φ:A→B be a tracial positive linear map between von Neumann algebras. Then

for each pair of same monotonic functions f and g defined on the spectrum of a self-adjoint element ρ and each operator A∈A.

Clearly, Ψ is a tracial positive linear map. Let A∈A. Then the matrices [0AA∗0] and [ρ00ρ] are self-adjoint elements of M2(A). Furthermore, the spectrums of ρ and [ρ00ρ] are equal. Hence,