A new method for binning a set of n data values into a set of m bins for the case where the bins are of different sizes is proposed. The method skips binning using a binary search across the bins all the time. It is proven the method exhibits a linear average-case computation time. The experiments' results show a speedup factor of over four compared to binning by binary search alone for data values with unknown distributions. This result is consistent with the analysis of the method. 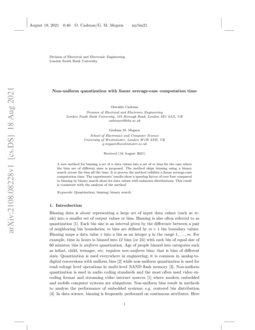 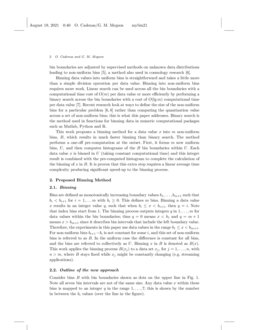 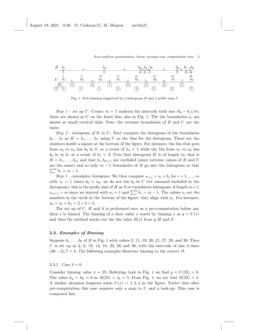 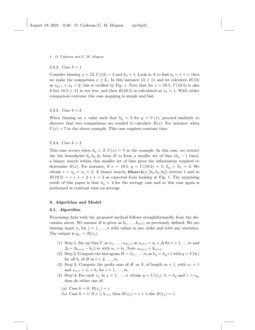 Binning data is about representing a large set of input data values (such as reals) into a smaller set of output values or bins. Binning is also often referred to as quantization [1]. Each bin size is an interval given by the difference between a pair of neighboring bin boundaries; m bins are defined by m+1 bin boundary values. Binning maps a data value x into a bin as an integer q in the range 1,…,m. For example, time in hours is binned into 12 bins (or 24) with each bin of equal size of 60 minutes; this is uniform quantization. Age of people binned into categories such as infant, child, teenager, etc. requires non-uniform bins; that is bins of different sizes. Quantization is used everywhere in engineering; it is common in analog-to-digital conversions with uniform bins [2] while non-uniform quantization is used for read-voltage level operations in multi-level NAND flash memory [3]. Non-uniform quantization is used in audio coding standards and the most often used video encoding format and streaming video internet sources [1] where modern embedded and mobile computer systems are ubiquitous. Non-uniform bins result in methods to analyse the performance of embedded systems; e.g. centered bin distribution [4]

This work proposes a binning method for a data value x into m non-uniform bins, B, which results in much faster binning than binary search. The method performs a one-off pre-computation at the outset. First, it forms m new uniform bins, U, and then computes histograms of the B bin boundaries within U. Each data value x is binned in U (taking constant computational time) and this integer result is combined with the pre-computed histogram to complete the calculation of the binning of x in B. It is proven that this extra step requires a linear average time complexity producing significant speed-up to the binning process.

Bins are defined as monotonically increasing boundary values b1,…,bm+1 such that bi<bi+1 for i=1,…m with bi≥0. This defines m bins. Binning a data value x results in an integer value q, such that when bi≤x<bi+1, then q=i. Note that index bins start from 1. The binning process outputs integers q in 1,…,m for data values within the bin boundaries; thus q=0 means x<b1 and q=m+1 means x>bm+1 since it describes bin intervals that include the left boundary value. Therefore, the experiments in this paper use data values in the range b1≤x<bm+1. For non-uniform bins bi+1−bi is not constant for some i, and this set of non-uniform bins is referred to as B. In the uniform case the difference is constant for all bins, and the bins are referred to collectively as U. Binning x in B is denoted as B(x). This work applies the binning process B(xj) to a data set xj, for j=1,…,n, with n>m, where B stays fixed while xj might be constantly changing (e.g. streaming applications).

2.2 Outline of the new approach

Consider bins B with bin boundaries shown as dots on the upper line in Fig. 1. Note all seven bin intervals are not of the same size. Any data value x within these bins is mapped to an integer q in the range 1,…,7; this is shown by the number in between the bi values (over the line in the figure).

Step 1 - set up U: Create m=7 uniform bin intervals with size (b8−b1)/m; these are shown as U on the lower line, also in Fig. 1. The bin boundaries ui are shown at small vertical ticks. Note, the extreme boundaries of B and U are the same.

Step 2 - histogram of B in U: Next compute the histogram of bin boundaries b2…b7 as H=h1,…,h7 using U as the bins for the histogram. These are the numbers inside a square at the bottom of the figure. For instance, the bin that goes from u3 to u4 has b2 in it, so a count of h3=1 while the bin from u7 to u8 has b6,b7 in it, so a count of h7=2. Note that histogram H is of length m; that is H=h1,…,hm and that b1,bm+1 are excluded (since extreme values of B and U are the same) and so only m−1 boundaries of B go into the histogram so that ∑mihi=m−1.

The set up of U, H and S is performed once as a pre-computation before any data x is binned. The binning of a data value x starts by binning x as q=U(x) and then the method works out the bin value B(x) from q,H and S.

When binning an x value such that hq=2 for q=U(x), proceed similarly to discover that two comparisons are needed to calculate B(x). For instance when U(x)=7 in the above example. This case requires constant time.

Processing data with the proposed method follows straightforwardly from the discussion above. We assume B is given as b1,…,bm+1 as previously defined. We are binning input xj for j=1,…,n with values in any order and with any statistics. The output is qxj=B(xj).

Steps 1, 2 and 3 are performed once and so its computational time cost diminishes quickly for large n. Bq can be pre-computed as part of Step 2 and necessary only for those instances where the histogram count is greater than two. This is left down to a programming implementation of the method. Cases h=0,h=1 and h=2 require 0, 1 and 2 comparisons respectively and thus are of constant computation time per x data item. The case h>2 is considered in the next section.

Note U(b1)=1 and U(bm+1)=m+1 with bm+1 being the smaller value that is mapped to m since bm+1>bm. This implies that U(bi) for i=2,…,m may map into any integer q in the range 1,…,m but as there are m bins in U and we are only mapping m−1 bi boundaries values then, the pigeon hole principle conditions are not met (m−1 pigeons, m holes) to guarantee that at least one bi boundary value of B will be found within a U interval (see Fig. 1 where b2−b1>Δ for example). Thus, defining hq as the count of cases where U(bi)=q for i=2,…,m we can guarantee that ∑mq=1hq=m−1; this is computed and stored over U.

We then compute the cumulative histogram S as si+1=si+hi for i=1,…,m with s1=1 (to include b1) so that sm+1=m. Note that si are annotated aligned with ui boundary values. We reason about si in these terms. For a value x such that U(x)=q we look at the value r=sq and that means that the x value is greater or equal to the first r boundary values of B, that is x≥bi for i=1,…,r. Note that q=B(x) also means that x lies within the uniform interval q that goes from uq to uq+1 boundary values of U, and so to obtain the actual binning B(x) we have to resolve where x actually lies within the possible bi boundary values that also mapped as q=U(bi); information already available in hq.

The binning problem reduces to how we count all the possible valid solutions of distributing m1 boundaries (B) across m2 (U) bins. Define the mappings of non-uniform boundaries to uniform bins by a C×m2 2D grid of values 0≤j≤m1. The 2D grid m2C amounts to the global count of bins with valid hi values. For the whole grid, the amount of bins having a value of j is proportional to Cj.

Each row of the grid satisfies the equation ∑m2j=1hj=m1 then by the stars and bars approach we see that there are C=(m1+m2−1m1) rows to the grid [12].

follows by a counting rule on the grid.

Also note that the sum of all possible values for the C solutions is,

are Poisson-like probability distribution for the slot values

We can derive a recurrence,

We note that a012(n−i)=n−i and aq>2(i)=i since it does not matter how the data items are arranged with the bins associated with each of the aggregated terms. Thus,

which implies tavg(n)≤O(nlgμ). And since μ<4 we conclude the method has O(n) time average performance.

Two main experiments were conducted on an x86-64 microprocessor. Firstly, binning data within a random set of m bins, B, with 3<m≤512. Twenty million xj values were used with different random distributions. Five thousands of runs were performed to compute B(xj), both with a binary search and with the proposed binning method and then average taken. Fig. 2 shows a faster computation with the proposed method, over binary search, as the number of bins increases (m1=m2=m). The speedup factor is well over a factor of three for large m. This is so as binary search time follows a O(nlgm) time as expected, while the proposed computation method exhibits time O(n) on average.

In a second experiment, the data set xj is kept fixed. Binning by binary search is performed for m=10,25,50 number of bins; these are typical values for binning when exploring data. Binning with the proposed method is then performed on the same xj set using m+k bins when setting up U; parameter k is varied across the range k=0,…,m+1 over thousands of runs. The results, shown in Fig. 3, show that an extra speedup factor is gained for k>1 and reaches around a factor of 1.25 when k=m+1. This simple extra arrangement results in an overall combined speedup factor of over four by essentially having U with double the size of bins of B.

The proposed method for binning a value x into m non-uniform bins decomposes the process into four base cases, three of which take constant computation time. A fourth case, recurs to binary search but only of h bins with h<m; 3<h<4

on average as shown. Other methods to improve over binary search, such as interpolation search, that has a

[9]. We did not find a substantial benefit of interpolation search over binary search in the two experiments conducted here. The proposed method is expected to improve processing techniques that use binary search such as fractional cascading [10] that searches over multiple sequences or for finding interval intersections in gene sequencing [11]. The analysis shows that for large values of m

It was proven that on average the binning method presented here, for non-uniform quantization, runs in linear time and so it is faster for binning the same data values when compared to using binary search. The method gets better as m increases. Empirically, we find a speedup factor of over three for large m; result explained from the theoretical analysis. Extra acceleration is achieved by adding a parameter k, k=m+1 (essentially doubling the number of bins in the internal mechanism used in the method), we report an extra speedup factor of 1.25 which is also consistent with the analysis. This parameter k increases the probability of binning a value within m non-uniform bins in constant computational time. The method applies equally to real or integer values and it is directly applicable to computing histograms. Results shows the binning of data with the proposed method performs four times faster than existing methods in streaming applications using standard microprocessors.