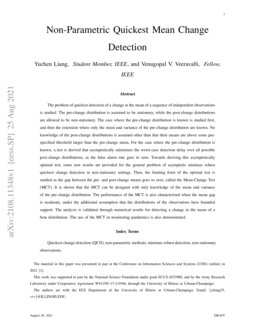 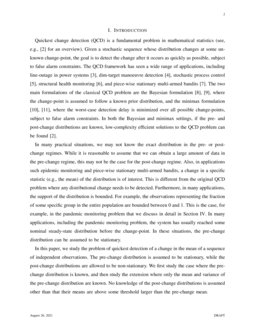 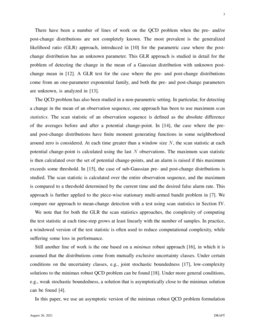 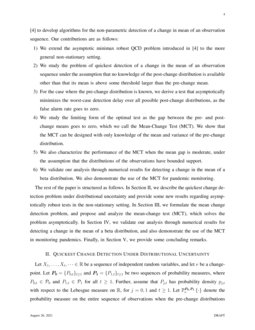 Quickest change detection (QCD) is a fundamental problem in mathematical statistics (see, e.g., [27] for an overview). Given a stochastic sequence whose distribution changes at some unknown change-point, the goal is to detect the change after it occurs as quickly as possible, subject to false alarm constraints. The QCD framework has seen a wide range of applications, including line-outage in power systems [2], dim-target manoeuvre detection [13], stochastic process control [23], structural health monitoring [3], and piece-wise stationary multi-armed bandits [1]. The two main formulations of the classical QCD problem are the Bayesian formulation [20, 25], where the change-point is assumed to follow a known prior distribution, and the minimax formulation [10, 18], where the worst-case detection delay is minimized over all possible change-points, subject to false alarm constraints. In both the Bayesian and minimax settings, if the pre- and post-change distributions are known, low-complexity efficient solutions to the QCD problem can be found [27].

In many practical situations, we may not know the exact distribution in the pre- or post-change regimes. While it is reasonable to assume that we can obtain a large amount of data in the pre-change regime, this may not be the case for the post-change regime. Also, in applications such epidemic monitoring and piece-wise stationary multi-armed bandits, a change in a specific statistic (e.g., the mean) of the distribution is of interest. This is different from the original QCD problem where any distributional change needs to be detected. Furthermore, in many applications, the support of the distribution is bounded. For example, the observations representing the fraction of some specific group in the entire population are bounded between 0 and 1. This is the case, for example, in the pandemic monitoring problem that we discuss in detail in Section IV. In many applications, including the pandemic monitoring problem, the system has usually reached some nominal steady-state distribution before the change-point. In these situations, the pre-change distribution can be assumed to be stationary.

There have been a number of lines of work on the QCD problem when the pre- and/or post-change distributions are not completely known. The most prevalent is the generalized likelihood ratio (GLR) approach, introduced in [10]

for the parametric case where the post-change distribution has an unknown parameter. This GLR approach is studied in detail for the problem of detecting the change in the mean of a Gaussian distribution with unknown post-change mean in

, the case where the pre- and post-change distributions have finite moment generating functions in some neighborhood around zero is considered. At each time greater than a window size

N, the scan statistic at each potential change-point is calculated using the last N observations. The maximum scan statistic is then calculated over the set of potential change-points, and an alarm is raised if this maximum exceeds some threshold. In [12], the case of sub-Gaussian pre- and post-change distributions is studied. The scan statistic is calculated over the entire observation sequence, and the maximum is compared to a threshold determined by the current time and the desired false alarm rate. This approach is further applied to the piece-wise stationary multi-armed bandit problem in [1]. We compare our approach to mean-change detection with a test using scan statistics in Section IV.

We note that for both the GLR the scan statistics approaches, the complexity of computing the test statistic at each time-step grows at least linearly with the number of samples. In practice, a windowed version of the test statistic is often used to reduce computational complexity, while suffering some loss in performance.

Still another line of work is the one based on a minimax robust approach [5], in which it is assumed that the distributions come from mutually exclusive uncertainty classes. Under certain conditions on the uncertainty classes, e.g., joint stochastic boundedness [15], low-complexity solutions to the minimax robust QCD problem can be found [26]. Under more general conditions, e.g., weak stochastic boundedness, a solution that is asymptotically close to the minimax solution can be found [13].

In this paper, we use an asymptotic version of the minimax robust QCD problem formulation [13] to develop algorithms for the non-parametric detection of a change in mean of an observation sequence. Our contributions are as follows:

The rest of the paper is structured as follows. In Section II, we describe the quickest change detection problem under distributional uncertainty and provide some new results regarding asymptotically robust tests in the non-stationary setting. In Section III, we formulate the mean change detection problem, and propose and analyze the mean-change test (MCT), which solves the problem asymptotically. In Section IV, we validate our analysis through numerical results for detecting a change in the mean of a beta distribution, and also demonstrate the use of the MCT in monitoring pandemics. Finally, in Section V, we provide some concluding remarks.

be a sequence of independent random variables, and let

be two sequences of probability measures, where

The change-time ν is assumed to be unknown but deterministic. The problem is to detect the change quickly while not causing too many false alarms. Let τ be a stopping time [15] defined on the observation sequence associated with the detection rule, i.e. τ is the time at which we stop taking observations and declare that the change has occurred.

For the case where both the pre- and post-change distributions are stationary and known, Lorden [10] proposed solving the following optimization problem to find the best stopping time τ:

is a worst-case delay metric, and

Lorden also showed that Page’s Cumulative Sum (CuSum) algorithm [17] whose test statistic is given by:

solves the problem in (1) asymptotically. Here LP0,P1 is the likelihood ratio:

The CuSum stopping rule is given by:

where bα:=|lnα|. It was shown by Moustakides [16] that the CuSum algorithm is exactly optimal for the problem in (1).

When the pre-change and post-change distributions are unknown but belong to known uncertainty sets and are possibly non-stationary, a minimax robust formulation can be used in place of (1):

and the feasible set is defined as

We now address the solution to the problem in (8). To this end, we give the following using definitions.

where L¯P0,¯P1 is the likelihood ratio between ¯P1 and ¯P0 (see (6)). The distributions ¯P0 and ¯P1 are called least favorable distributions (LFDs) within the classes P0 and P1, respectively.

for all P0∈P0. Here, EP[⋅] denotes the expectation operator with respect to distribution P, and D(P||Q) denotes KL-divergence:

Let ~P0,~P1 be such that P0×P1 is WS bounded by (~P0,~P1). In the following, we extend the result in [13] to the case where P0 and P1 are potentially non-stationary and derive an asymptotically optimal solution as α→0. Specifically, through Lemma II.1 we upper bound the asymptotic delay, through Lemma II.2 we control the false alarm rate, and in Theorem II.3 we combine the lemmas to provide an asymptotically optimal solution to the problem in (8) when P0 and P1 are potentially non-stationary.

Consider the same assumptions as in Lemma II.1. Then, for any P0,t∈P0,

for any threshold b>0.

Consider the same assumptions as in Lemma II.1. Then, the CuSum test τ(Λ~P0,~P1,bα) solves the problem in (8) asymptotically as α→0, and

The proofs of Lemma II.1, Lemma II.2 and Theorem II.3 are given in the appendix.

Until now, we have considered the general QCD problem formulated in (8). In this paper, we are mainly interested in a special case of the problem, described as follows. The pre-change distribution is stationary, i.e., P0,t=P0,∀t≥1, with pre-change mean μ0=EP0[X] and variance σ20=VarP0(X). Thus, P0={P0} is a singleton. The post-change distribution could be non-stationary, and at each time it belongs to the following uncertainty set:

In this expression, X denotes a generic observation in the sequence, and η is a pre-designed threshold. Define

which is half of the worst-case mean-change gap.

The minimax robust mean-change problem, which is a reformulation of (8) is given by:

Our goal is to find a stopping time that solves (22) asymptotically as the false alarm rate α→0.

to be the cumulant-generating function (cgf) of the observations under P0. In the following theorem, we provide a solution to the problem stated in (22).

where κ0(λ) is the cgf under P0 and λ∗ satisfies

Then, the CuSum statistic

where μ′=μ−1, and since z is arbitrary, we arrive at

By the Generalized Kuhn–Tucker Theorem [11], since p0(x) is bounded, p1(x)=p0(x)eλx+μ′ is a necessary condition for optimality. Furthermore, since J(p1,λ,μ) is convex in p1, this is also a global optimum. To satisfy the constraints, we have

Furthermore, the minimum KL-divergence is

Note that ~p1 is an exponentially-tilted version (or the Esscher transform) of p0.

Even though we have an expression for the test statistic when P0 is known, as given in (26), the exact solution of λ∗ is not available in closed-form. Fortunately, if the mean-change gap Δ is small, we obtain a low-complexity test in terms of only the pre-change mean and variance that closely approximates the performance of the asymptotically minimax optimal test in the previous section.

where we have used κ′0(λ∗)=η. Hence, the approximate log-likelihood ratio at time t is

and the corresponding minimum KL-divergence is approximated as:

Therefore, if Δ is small, it is sufficient to know only the mean and variance to construct a good approximation to the asymptotically minimax robust test. Furthermore, only the mean of the pre-change distribution is needed to construct the MCT statistic. From the simulation results in Section IV, we see that the performance of the MCT can be very close to that of the asymptotically minimax robust test even for moderate values of Δ

. Since the mean and variance of a distribution are much easier and more accurate to estimate than the entire density, this test can be useful and accurate when only a moderate number of observations in the pre-change regime is available.

It is interesting that the form of MCT statistic in (III-B) coincides with that of the CuSum statistic (see (II)) with known stationary pre- and post-change distributions, P0∼N(μ0,σ2) and P1∼N(η,σ2), respectively. Here N(μ,σ2) denotes a Gaussian distribution with mean μ and variance σ2.

We now study the asymptotic performance of the MCT for fixed Δ, as α→0. For this part of the analysis, we assume that the pre- and post-change distributions have supports that are uniformly bounded, and without loss of generality, we assume that the bounding interval is [0,1]. This assumption holds in many practical applications, including the pandemic monitoring problem discussed in Section IV.

Then the MCT statistic of (III-B) can be written as:

where b has to be chosen to meet the FAR constraint:

In what follows, we write τ(~Λμ0,η,b) as τ(b), with the understanding that the test statistic being used throughout is the MCT statistic ~Λμ0,η.

In Lemma III.2 below, we first control the boundary crossing probability of St in the pre-change regime. Then, in Theorem III.3, we use Lemma III.2 to bound the false alarm rate of the MCT asymptotically using the procedure outlined in [22].

and Kβ(z) is the modified Bessel function of the second kind of order β.

Under the same assumptions as in Lemma III.2, let ~b′α be such that