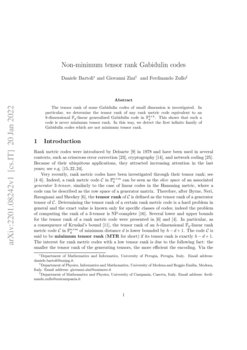 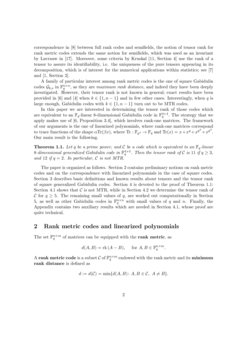 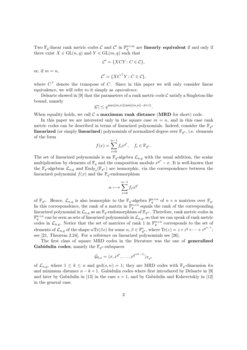 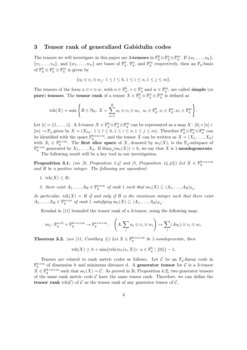 We present the theory of rank-metric codes with respect to the 3-tensors...
Eimear Byrne, et al. ∙

A remark on 𝔽_q^n-Linear MRD codes

In this note, we provide a description of the elements of minimum rank o...
Luca Giuzzi, et al. ∙

Visible Rank and Codes with Locality

Tensor Codes and their Invariants

On the Sparseness of Certain MRD Codes

We determine the proportion of [3× 3;3]-MRD codes over F_q within the s...
Heide Gluesing-Luerssen, et al. ∙

On Good Infinite Families of Toric Codes or the Lack Thereof

A toric code, introduced by Hansen to extend the Reed-Solomon code as a ...
Mallory Dolorfino, et al. ∙

Rank metric codes were introduced by Delsarte [9] in 1978 and have been used in several contexts, such as crisscross error correction [23], cryptography [14], and network coding [25]. Because of their ubiquitous applications, they attracted increasing attention in the last years; see e.g. [15, 22, 24].

A family of particular interest among rank metric codes is the one of square Gabidulin codes Gk,s in Fn×nq, as they are maximum rank distance, and indeed they have been deeply investigated. However, their tensor rank is not known in general; exact results have been provided in [6] and [4] when k∈{1,n−1} and in few other cases. Interestingly, when q is large enough, Gabidulin codes with k∈{1,n−1} turn out to be MTR codes.

In this paper we are interested in determining the tensor rank of those codes which are equivalent to an Fq-linear 8-dimensional Gabidulin code in F4×4q. The strategy that we apply makes use of [6, Proposition 3.4], which involves rank-one matrices. The framework of our arguments is the one of linearized polynomials, where rank-one matrices correspond to trace functions of the shape αTr(βx), where Tr:Fq4→Fq and Tr(x)=x+xq+xq2+xq3. Our main result is the following.

Let q be a prime power, and C be a code which is equivalent to an Fq-linear 8-dimensional generalized Gabidulin code in F4×4q. Then the tensor rank of C is 11 if q≥3, and 12 if q=2. In particular, C is not MTR.

The paper is organized as follows. Section 2 contains preliminary notions on rank metric codes and on the correspondence with linearized polynomials in the case of square codes. Section 3 describes basic definitions and known results about tensors and the tensor rank of square generalized Gabidulin codes. Section 4 is devoted to the proof of Theorem 1.1: Section 4.1 shows that C is not MTR, while in Section 4.2 we determine the tensor rank of C for q≥5. The remaining small values of q, are worked out computationally in Section 5, as well as other Gabidulin codes in Fn×nq with small values of q and n. Finally, the Appendix contains two auxiliary results which are needed in Section 4.1, whose proof are quite technical.

The set Fn×mq of matrices can be equipped with the rank metric, as

Two Fq-linear rank metric codes C and C′ in Fn×mq are linearly equivalent if and only if there exist X∈GL(n,q) and Y∈GL(m,q) such that

where C⊤ denote the transpose of C. Since in this paper we will only consider linear equivalence, we will refer to it simply as equivalence.

Delsarte showed in [9] that the parameters of a rank metric code C satisfy a Singleton-like bound, namely

In this paper we are interested only in the square case m=n, and in this case rank metric codes can be described in terms of linearized polynomials. Indeed, consider the Fq-linearized (or simply linearized) polynomials of normalized degree over Fqn, i.e. elements of the form

The set of linearized polynomials is an Fq-algebra Ln,q with the usual addition, the scalar multiplication by elements of Fq and the composition modulo xqn−x. It is well-known that the Fq-algebras Ln,q and EndFq(Fqn) are isomorphic, via the correspondence between the linearized polynomial f(x) and the Fq-endomorphism

The first class of square MRD codes in the literature was the one of generalized Gabidulin codes, namely the Fqn-subspaces

The tensors we will investigate in this paper are 3-tensors in Fhq⊗Fnq⊗Fmq. If {u1,…,uh}, {v1,…,vn}, and {w1,…,wn} are bases of Fhq, Fnq, and Fmq respectively, then an Fq-basis of Fhq⊗Fnq⊗Fmq is given by

The tensors of the form u⊗v⊗w, with u∈Fhq, v∈Fnq and w∈Fmq, are called simple (or pure) tensors. The tensor rank of a tensor X∈Fhq⊗Fnq⊗Fmq is defined as

The following result will be a key tool in our investigation.

In particular, trk(X)=R if and only if R is the minimum integer such that there exist A1,…,AR∈Fn×mq of rank 1 satisfying ss1(X)⊆⟨A1,…,AR⟩Fq.

Kruskal in [11] bounded the tensor rank of a 3-tensor, using the following map:

If C attains equality in (1), it is called a minimum tensor rank (MTR for short) code.

Although Gabidulin codes form the most studied family of rank metric codes, the complete determination of their tensor rank is still missing. We now describe the known results on the tensor rank of square Gabidulin codes Gk,s⊂Ln,q. Bound (1) reads as follows.

The following upper bound follows from the tensor rank of G1,s.

A partial result is known also in the case of Gabidulin codes Gn−1,s.

The tensor rank of Gabidulin codes Gk,s with k∉{1,n−1} is not known. In this paper we study the first open case, namely k=2 and n=4. In Section 5 we will investigate the remaining open cases when n≤4.

This section is devoted to the proof of the following theorem.

The proof strategy relies on two steps: Step 1: To find explicit necessary and sufficient conditions on α3,β3∈Fq4 such that α3Tr(β3x)∈H. Step 2: To prove the non-existence of ten Fq-linearly independent traces in H.

In Steps 1 and 2 we will also need auxiliary results (Theorems 6.1 and 6.2 respectively) which are in Appendix, due to their technicality.

From now on we always assume c1c2≠0. By the last two equations in System (2) one gets

which implies β1/β2∈F∗q. Similarly, one can show that α1/α2∈F∗q. However, this is a contradiction to our assumptions.

We are interested in bounding the number of non-Fq-proportional pairs (c1,c2), with c1c2≠0. The above homogeneous polynomial in c1 and c2 is of degree at most three in both c1 and c2, and its coefficients are as follows:

Therefore the number of non-Fq-proportional solutions (c1,c2) with c1c2≠0 is at most 2, if the polynomial is non-vanishing. Moreover, this polynomial vanishes if and only if