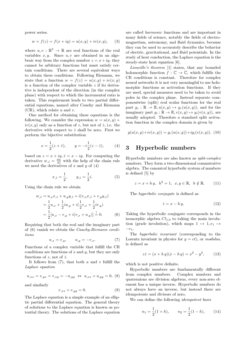 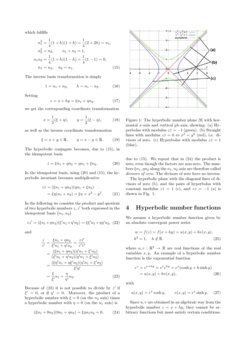 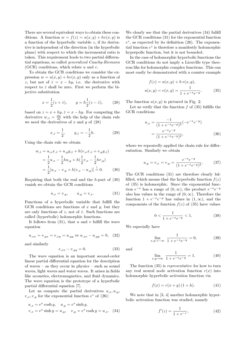 For the sake of mathematical clarity, we first carefully review the notion of holomorphic functions in the two number systems of complex and hyperbolic numbers.

is independent of the direction with respect to which the incremental ratio, that defines the derivative, is taken [5]. Holomorphic functions would be ideal for activation functions of complex neural networks, but the Liouville theorem means that careful measures need to be taken in order to avoid poles (where the function becomes infinite).

Yet recently the use of hyperbolic numbers

it was shown, that hyperbolic number neural networks allow to control the angle of the decision boundaries (hyperplanes) of the real and the unipotent

Contrary to the complex case, the hyperbolic logistic function is bounded. This is due to the absence of singularities. Thus, in general terms, this seems to be a suitable activation function. Concretely, the following facts, however, might be of disadvantage. The real and imaginary part have different squashing values. Both component functions do only significantly differ from zero around the lines111Note that we slightly correct the two formulas of Buchholz, because we think it necessary to delete e1 in Buchholz’ original x=ye1(x>0), etc. x=y(x>0) and −x=y(x<0).

Complex numbers are isomorphic to the Clifford geometric algebra Cl0,1

which is generated by a single vector

Hyperbolic numbers are isomorphic to the Clifford geometric algebra Cl1,0 which is generated by a single vector e1 of positive square e1=+1, with algebraic basis {1,e1}. The isomorphism between hyperoblic numbers and Cl1,0 is realized by mapping h↦e1.

We follow the treatment given in [5]. We assume a complex function given by an absolute convergent power series.

where u,v:R2→R are real functions of the real variables x,y. Since u,v are obtained in an algebraic way from the complex number z=x+iy, they cannot be arbitrary functions but must satisfy certain conditions. There are several equivalent ways to obtain these conditions. Following Riemann, we state that a function w=f(z)=u(x,y)+iv(x,y) is a function of the complex variable z

if its derivative is independent of the direction (in the complex plane) with respect to which the incremental ratio is taken. This requirement leads to two partial differential equations, named after Cauchy and Riemann (CR), which relate

One method for obtaining these equations is the following. We consider the expression w=u(x,y)+iv(x,y) only as a function of z, but not of ¯z, i.e. the derivative with respect to ¯z shall be zero. First we perform the bijective substitution

Using the chain rule we obtain

It follows from (7), that both u and v fulfill the Laplace equation

Liouville’s theorem [1] states, that any bounded holomorphic function f:C→C, which fulfills the CR conditions is constant. Therefore for complex neural networks it is not very meaningful to use holomorphic functions as activation functions. If they are used, special measures need to be taken to avoid poles in the complex plane. Instead separate componentwise (split) real scalar functions for the real part gr:R→R,u(x,y)↦gr(u(x,y)), and for the imaginary part gi:R→R,v(x,y)↦gi(v(x,y)), are usually adopted. Therefore a standard split activation function in the complex domain is given by

Hyperbolic numbers are also known as split-complex numbers. They form a two-dimensional commutative algebra. The canonical hyperbolic system of numbers is defined [5] by

The hyperbolic conjugate is defined as

Taking the hyperbolic conjugate corresponds in the isomorphic algebra Cl1,0 to taking the main involution (grade involution), which maps 1↦1,e1↦−e1.

The hyperbolic invariant (corresponding to the Lorentz invariant in physics for y=ct), or modulus, is defined as

which is not positive definite.

We can define the following idempotent basis

The inverse basis transformation is simply

we get the corresponding coordinate transformation

as well as the inverse coordinate transformation

The hyperbolic conjugate becomes, due to (15), in the idempotent basis

In the idempotent basis, using (20) and (15), the hyperbolic invariant becomes multiplicative

In the following we consider the product and quotient of two hyperbolic numbers z,z′ both expressed in the idempotent basis {n1,n2}

due to (15). We repeat that in (24) the product is zero, even though the factors are non-zero. The numbers ξn1,ηn2 along the n1,n2 axis are therefore called divisors of zero. The divisors of zero have no inverse.

The hyperbolic plane with the diagonal lines of divisors of zero (b), and the pairs of hyperbolas with constant modulus z¯z=1 (c), and z¯z=−1 (a) is shown in Fig. 1.

where u,v:R2→R are real functions of the real variables x,y. An example of a hyperbolic number function is the exponential function

Since u,v are obtained in an algebraic way from the hyperbolic number z=x+hy, they cannot be arbitrary functions but must satisfy certain conditions. There are several equivalent ways to obtain these conditions. A function w=f(z)=u(x,y)+hv(x,y) is a function of the hyperbolic variable z, if its derivative is independent of the direction (in the hyperbolic plane) with respect to which the incremental ratio is taken. This requirement leads to two partial differential equations, so called generalized Cauchy-Riemann (GCR) conditions, which relate u and v.

To obtain the GCR conditions we consider the expression w=u(x,y)+hv(x,y) only as a function of z, but not of ¯z=x−hy, i.e. the derivative with respect to ¯z shall be zero. First we perform the bijective substitution

based on z=x+hy,¯z=x−hy. For computing the derivative w,¯z=dwd¯z with the help of the chain rule we need the derivatives of x and y of (28)

Using the chain rule we obtain

It follows from (31), that u and v fulfill the wave equation

Let us compute the partial derivatives u,x,u,y, v,x,v,y for the exponential function ez of (26):

In the case of holomorphic hyperbolic functions the GCR conditions do not imply a Liouville type theorem like for holomorphic complex functions. This can most easily be demonstrated with a counter example

where we repeatedly applied the chain rule for differentiation. Similarly we obtain

We note that in [3, 4] another holomorphic hyperbolic activation function was studied, namely

but compare the quote from [4], p. 114, given in the introduction. The split activation function used in [2]

The hyperbolic polar coordinate transformation [5] is then given as

The product of a constant hyperbolic number (assuming a2x>a2y,ax>0)

with a hyperbolic number z (assuming x2>y2, x>0) in hyperbolic polar coordinates is

The geometric interpretation is a scaling of the modulus ρ→ρaρ and a hyperbolic rotation (movement along a hyperbola) θ→θ+θa.

In the physics of Einstein’s special relativistic space-time [11, 12], the hyperbolic rotation θ→θ+θa corresponds to a Lorentz transformation from one inertial frame with constant velocity tanhθ to another inertial frame with constant velocity tanh(θ+θa). Neural networks based on hyperbolic numbers (dimensionally extended to four-dimensional space-time) should therefore be ideal to compute with electromagnetic signals, including satellite transmission.

in some detail. The distinct notions of idempotents and divisors of zero, special to hyperbolic numbers, were introduced. After further introducing hyperbolic polar coordinates, a geometric interpretation of the hyperbolic number multiplication was given.

In the beginning was the Word222Greek term: logos. Note: A Greek philosopher named Heraclitus first used the term Logos around 600 B.C. to designate the divine reason or plan which coordinates a changing universe. [14], and the Word was with God, and the Word was God. He was with God in the beginning. Through him all things were made; without him nothing was made that has been made. In him was life, and that life was the light of all mankind.

I want to thank my dear family, as well as T. Nitta and Y. Kuroe.