We consider the finite sample properties of the regularized high-dimensional Cox regression via lasso. Existing literature focuses on linear models or generalized linear models with Lipschitz loss functions, where the empirical risk functions are the summations of independent and identically distributed (iid) losses. The summands in the negative log partial likelihood function for censored survival data, however, are neither iid nor Lipschitz. We first approximate the negative log partial likelihood function by a sum of iid non-Lipschitz terms, then derive the non-asymptotic oracle inequalities for the lasso penalized Cox regression using pointwise arguments to tackle the difficulty caused by the lack of iid and Lipschitz property. 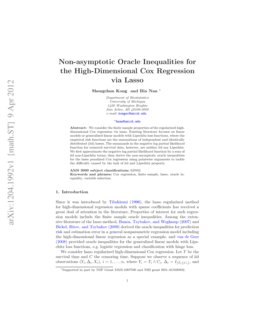 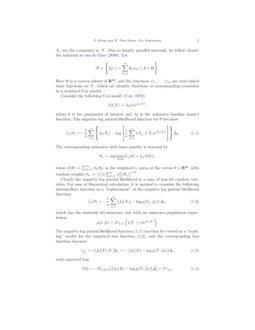 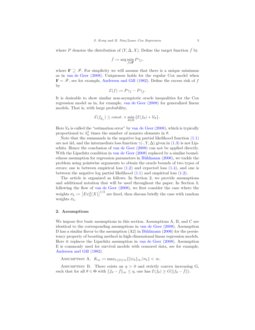 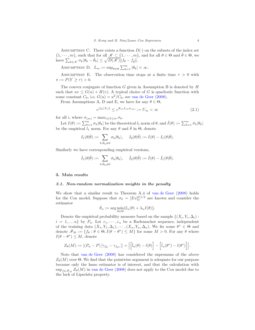 The ℓ_1-penalized method, or the Lasso, has emerged as an important tool...
Jian Huang, et al. ∙

In this paper we revisit the risk bounds of the lasso estimator in the c...
Pierre C. Bellec, et al. ∙

Since it was introduced by Tibshirani (1996), the lasso regularized method for high-dimensional regression models with sparse coefficients has received a great deal of attention in the literature. Properties of interest for such regression models include the finite sample oracle inequalities. Among the extensive literature of the lasso method, Bunea, Tsybakov, and Wegkamp (2007) and Bickel, Ritov, and Tsybakov (2009)

derived the oracle inequalities for prediction risk and estimation error in a general nonparametric regression model including the high-dimensional linear regression as a special example, and

We consider lasso regularized high-dimensional Cox regression. Let T be the survival time and C the censoring time. Suppose we observe a sequence of iid observations (Yi,Δi,Xi), i=1,…,n, where Yi=Ti∧Ci, Δi=I{Ti≤Ci}, and Xi are the covariates in X. Due to largely parallel material, we follow closely the notation in van de Geer (2008). Let

Here Θ is a convex subset of Rm, and the functions ψ1,⋯,ψm are real-valued basis functions on X, which are identity functions of corresponding covariates in a standard Cox model.

where θ is the parameter of interest and λ0 is the unknown baseline hazard function. The negative log partial likelihood function for θ becomes

The corresponding estimator with lasso penalty is denoted by

norm of the vector

which has the desirable iid structure, but with an unknown population expectation

where P denotes the distribution of (Y,Δ,X). Define the target function ¯f by

where F⊇F. For simplicity we will assume that there is a unique minimum as in van de Geer (2008). Uniqueness holds for the regular Cox model when F=F, see for example, Andersen and Gill (1982). Define the excess risk of f by

It is desirable to show similar non-asymptotic oracle inequalities for the Cox regression model as in, for example, van de Geer (2008)

for generalized linear models. That is, with large probability,

Here Vθ is called the “estimation error” by van de Geer (2008), which is typically proportional to λ2n times the number of nonzero elements in θ.

Note that the summands in the negative log partial likelihood function (1.1) are not iid, and the intermediate loss function γ(⋅,Y,Δ) given in (1.3) is not Lipschitz. Hence the conclusion of van de Geer (2008) can not be applied directly. With the Lipschitz condition in van de Geer (2008) replaced by a similar boundedness assumption for regression parameters in Bühlmann (2006), we tackle the problem using pointwise arguments to obtain the oracle bounds of two types of errors: one is between empirical loss (1.2) and expected loss (1.4), and one is between the negative log partial likelihood (1.1) and empirical loss (1.2).

The article is organized as follows. In Section 2, we provide assumptions and additional notation that will be used throughout the paper. In Section 3, following the flow of van de Geer (2008), we first consider the case where the weights σk:=[Eψ2k(X)]1/2 are fixed, then discuss briefly the case with random weights ^σk.

Assumption B.  There exists an η>0 and strictly convex increasing G, such that for all θ∈Θ with ∥fθ−¯f∥∞≤η, one has E(fθ)≥G(∥fθ−¯f∥).

The convex conjugate of function G given in Assumption B is denoted by H such that uv≤G(u)+H(v). A typical choice of G is quadratic function with some constant C0, i.e. G(u)=u2/C0, see van de Geer (2008).

From Assumptions A, D and E, we have for any θ∈Θ,

Similarly we have corresponding empirical versions,

3.1 Non-random normalization weights in the penalty

We show that a similar result to Theorem A.4 of van de Geer (2008) holds for the Cox model. Suppose that σk=[Eψ2k]1/2 are known and consider the estimator

Note that van de Geer (2008) has considered the supremum of the above Zθ(M) over Θ. We find that the pointwise argument is adequate for our purpose because only the lasso estimator is of interest, and that the calculation with supf∈FMZθ(M) in van de Geer (2008) does not apply to the Cox model due to the lack of Lipschitz property.

Under Assumptions A, D and E, for all θ satisfying I(θ−θ∗)≤M, we have

For A we have

For B, instead of using the contraction theorem that requires Lipschitz, we use the mean value theorem in the following:

Since for all i,

We now can bound Zθ(M) using the Bousquet’s concentration theorem provided in van de Geer (2008) as Theorem A.1.

Using the triangular inequality and the mean value theorem, we obtain

Therefore, in view of Bousquet’s concentration theorem and Lemma 3.1, for all M>0 and r1>0,

Now for any θ satisfying I(θ−θ∗)≤M, we bound

which is equal to

By the mean value theorem, we have

Under Assumption E, we have

This is obtained directly from Massart (1990) by taking r=π√n/2 in the following:

Under Assumptions A, D and E, for all θ we have

where W is a constant that only depends on K=√2.

where ⌈x⌉ is the smallest integer that is greater than or equal to x. Furthermore, denote t0=0 and t⌈1/ε⌉=+∞. For i=1,⋯,⌈1/ε⌉, define brackets [Li,Ui] with

Under Assumptions A, D and E, for all θ we have

Consider the classes of functions indexed by t,

Using the same argument in the proof of Lemma 3.3, we have