In the successive refinement problem, a fixed-length sequence emitted from an information source is encoded into two codewords by two encoders in order to give two reconstructions of the sequence. One of two reconstructions is obtained by one of two codewords, and the other reconstruction is obtained by all two codewords. For this coding problem, we give non-asymptotic inner and outer bounds on pairs of numbers of codewords of two encoders such that each probability that a distortion exceeds a given distortion level is less than a given probability level. We also give a general formula for the rate-distortion region for general sources, where the rate-distortion region is the set of rate pairs of two encoders such that each maximum value of possible distortions is less than a given distortion level. 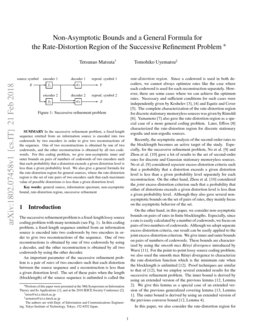 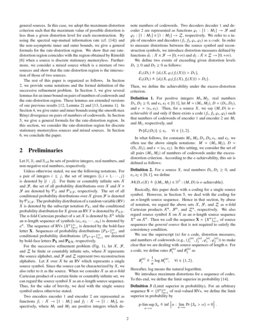 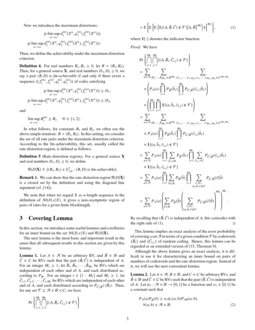 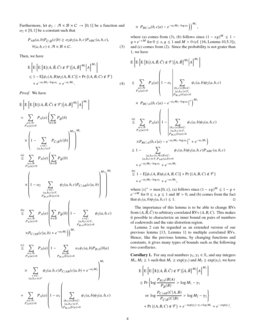 A coding theorem for the rate-distortion-perception function

We revisit the successive refinement problem with causal decoder side in...
Lin Zhou, et al. ∙

An important parameter of the successive refinement problem is a pair of rates of two encoders such that each distortion between the source sequence and a reconstruction is less than a given distortion level. The set of these pairs when the length (blocklength) of the source sequence is unlimited is called the rate-distortion region. Since a codeword is used in both decoders, we cannot always optimize rates like the case where each codeword is used for each reconstruction separately. However, there are some cases where we can achieve the optimum rates. Necessary and sufficient conditions for such cases were independently given by Koshelev [3], [4] and Equitz and Cover [5]. The complete characterization of the rate-distortion region for discrete stationary memoryless sources was given by Rimoldi [6]. Yamamoto [7] also gave the rate-distortion region as a special case of a more general coding problem. Later, Effros [8] characterized the rate-distortion region for discrete stationary ergodic and non-ergodic sources.

Recently, the asymptotic analysis of the second-order rates to the blocklength becomes an active target of the study. Especially, for the successive refinement problem, No et al.

Unless otherwise stated, we use the following notations. For a pair of integers i≤j, the set of integers {i,i+1,⋯,j} is denoted by [i:j]. For finite or countably infinite sets X and Y

, the set of all probability distributions over

X and X×Y are denoted by PX and PXY

, respectively. The set of all conditional probability distributions over

X given Y is denoted by PX|Y

. The probability distribution of a random variable (RV)

For the successive refinement problem (Fig. 1), let X, Y, and Z be finite or countably infinite sets, where X represents the source alphabet, and Y and Z represent two reconstruction alphabets. Let X over X be an RV which represents a single source symbol. Since the source can be characterized by X, we also refer to it as the source. When we consider X as an n-fold Cartesian product of a certain finite or countably infinite set, we can regard the source symbol X as an n-length source sequence. Thus, for the sake of brevity, we deal with the single source symbol unless otherwise stated.

Two encoders encoder 1 and encoder 2 are represented as functions f1:X→[1:M1] and f2:X→[1:M2], respectively, where M1 and M2 are positive integers which denote numbers of codewords. Two decoders decoder 1 and decoder 2 are represented as functions φ1:[1:M1]→Y and φ2:[1:M1]×[1:M2]→Z, respectively. We refer to a tuple of encoders and decoders (f1,f2,φ1,φ2) as a code. In order to measure distortions between the source symbol and reconstruction symbols, we introduce distortion measures defined by functions d1:X×Y→[0,+∞) and d2:X×Z→[0,+∞).

We define two events of exceeding given distortion levels D1≥0 and D2≥0 as follows:

Then, we define the achievability under the excess-distortion criterion.

In what follows, for constants M1,M2,D1,D2,ϵ1, and ϵ2, we often use the above simple notations: M=(M1,M2), D=(D1,D2), and ϵ=(ϵ1,ϵ2). In this setting, we consider the set of all pairs (M1,M2) of numbers of codewords under the excess-distortion criterion. According to the ϵ-achievability, this set is defined as follows:

We introduce maximum distortions for a sequence of codes. To this end, we define the limit superior in probability [14].

For an arbitrary sequence S={Sn}∞n=1 of real-valued RVs, we define the limit superior in probability by

Now we introduce the maximum distortions:

Then, we define the achievability under the maximum distortion criterion.

In what follows, for constants R1 and R2, we often use the above simple notation: R=(R1,R2). In this setting, we consider the set of all rate pairs under the maximum distortion criterion. According to the fm-achievability, this set, usually called the rate-distortion region, is defined as follows:

For a general source X and real numbers D1,D2≥0, we define

We can show that the rate-distortion region R(D|X) is a closed set by the definition and using the diagonal line argument (cf. [14]).

We note that when we regard X as n-length sequence in the definition of M(D,ϵ|X), it gives a non-asymptotic region of pairs of rates for a given finite blocklength.

In this section, we introduce some useful lemmas and corollaries for an inner bound on the set M(D,ϵ|X) and R(D|X).

The next lemma is the most basic and important result in the sense that all subsequent results in this section are given by this lemma.

By recalling that (~B,~C) is independent of A, this coincides with the right-hand side (RHS) of (1). ∎

This lemma implies an exact analysis of the error probability of covering a set A in terms of a given condition F by codewords {~Bi} and {~Ci,j} of random coding. Hence, this lemma can be regarded as an extended version of [15, Theorem 9].

Although the above lemma gives an exact analysis, it is difficult to use it for characterizing an inner bound on pairs of numbers of codewords and the rate-distortion region. Instead of it, we will use the next convenient lemma.

Then, for any set F⊆A×B×C, we have

The importance of this lemma is to be able to change RVs from (A,~B,~C) to arbitrary correlated RVs (A,B,C). This makes it possible to characterize an inner bound on pairs of numbers of codewords and the rate-distortion region.

Lemma 2 can be regarded as an extended version of our previous lemma [13, Lemma 1] to multiple correlated RVs. Hence, like the previous lemma, by changing functions and constants, it gives many types of bounds such as the following two corollaries.

Then, we can easily check that these constants and functions satisfy (2) and (3). Plugging these functions and constants into (4), we have the desired bound. ∎

This corollary can be regarded as a bound in terms of the information spectrum (cf. [14]). To the best of our knowledge, this type of bound has not been reported so far (although, there are some converse bounds [10, Lemma 15] and [17, Theorem 3]).

On the other hand, the next corollary gives a bound in terms of the smooth max Rényi divergence Dδ∞(P∥Q) defined as

On the other hand, let α1 and α2 be constants such that

Plugging these functions and constants into (4), we have

The original definition of the smooth max Rényi divergence (cf. [12]) is as follows: