This paper proposes an alternative language for expressing results of the algorithmic theory of randomness. The language is more precise in that it does not involve unspecified additive or multiplicative constants, making mathematical results, in principle, applicable in practice. Our main testing ground for the proposed language is the problem of defining Bernoulli sequences, which was of great interest to Andrei Kolmogorov and his students. 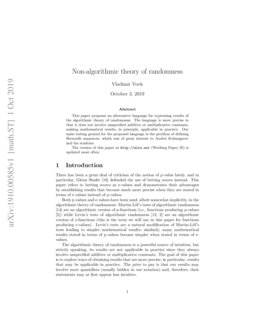 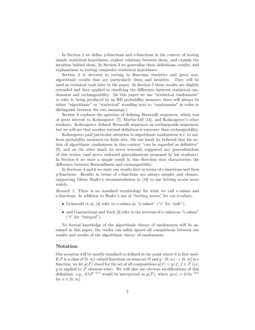 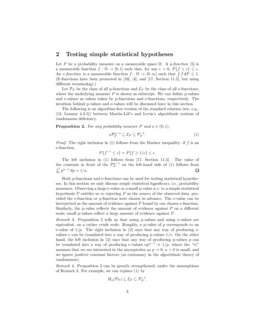 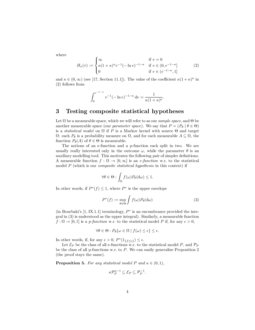 There has been a great deal of criticism of the notion of p-value lately, and in particular, Glenn Shafer [16] defended the use of betting scores instead. This paper refers to betting scores as e-values and demonstrates their advantages by establishing results that become much more precise when they are stated in terms of e-values instead of p-values.

The algorithmic theory of randomness is a powerful source of intuition, but strictly speaking, its results are not applicable in practice since they always involve unspecified additive or multiplicative constants. The goal of this paper is to explore ways of obtaining results that are more precise; in particular, results that may be applicable in practice. The price to pay is that our results may involve more quantifiers (usually hidden in our notation) and, therefore, their statements may at first appear less intuitive.

is devoted to testing in Bayesian statistics and gives non-algorithmic results that are particularly clean and intuitive. They will be used as technical tools later in the paper. In Section

Kolmogorov paid particular attention to algorithmic randomness w.r. to uniform probability measures on finite sets. On one hand, he believed that his notion of algorithmic randomness in this context “can be regarded as definitive” [9], and on the other hand, he never seriously suggested any generalizations of this notion (and never endorsed generalizations proposed by his students). In Section 6 we state a simple result in this direction that characterizes the difference between Bernoulliness and exchangeability.

There is no standard terminology for what we call e-values and e-functions. In addition to Shafer’s use of “betting scores” for our e-values,

The following is an algorithm-free version of the standard relation (see, e.g., [13, Lemma 4.3.5]) between Martin-Löf’s and Levin’s algorithmic notions of randomness deficiency.

The right inclusion in (1) follows from the Markov inequality: if f is an e-function,

Both p-functions and e-functions can be used for testing statistical hypotheses. In this section we only discuss

Proposition 2 can be greatly strengthened, under the assumptions of Remark 3. For example, we can replace (1) by

Let Ω be a measurable space, which we will refer to as our sample space, and Θ be another measurable space (our parameter space). We say that P=(Pθ∣θ∈Θ) is a statistical model on Ω if P is a Markov kernel with source Θ and target Ω: each Pθ is a probability measure on Ω, and for each measurable A⊆Ω, the function Pθ(A) of θ∈Θ is measurable.

The notions of an e-function and a p-function each split in two. We are usually really interested only in the outcome ω, while the parameter θ is an auxiliary modelling tool. This motivates the following pair of simpler definitions. A measurable function f:Ω→[0,∞] is an e-function w.r. to the statistical model P (which is our composite statistical hypothesis in this context) if

In other words, if P∗(f)≤1, where P∗ is the upper envelope

(in Bourbaki’s [1, IX.1.1] terminology, P∗ is an encumbrance provided the integral in (3) is understood as the upper integral). Similarly, a measurable function f:Ω→[0,1] is a p-function w.r. to the statistical model P if, for any ϵ>0,

For f∈EP, we regard the e-value f(ω) as the amount of evidence against the statistical model P found by f (which must be chosen in advance) when the outcome is ω. The interpretation of p-values is similar.

In some case we would like to take the parameter θ into account more seriously. A measurable function f:Ω×Θ→[0,∞] is a conditional e-function w.r. to the statistical model P if

Let ¯EP be the class of all such functions. And a measurable function f:Ω×Θ→[0,1] is a conditional p-function w.r. to P if

Let ¯PP be the class of all such functions.

For f∈¯EP, we can regard f(ω;θ) as the amount of evidence against the specific probability measure Pθ in the statistical model P found by f when the outcome is ω.

We can generalize Proposition 5 further as follows.

Remarks 3 and 4 are also applicable in the context of Propositions 5 and 6.

4 The validity of Bayesian statistics

In this section we establish the validity of Bayesian statistics in our framework, mainly as a sanity check. We will translate the results in [24], which are stated in terms of the algorithmic theory of randomness, to our algorithm-free setting. It is interesting that the proofs simplify radically, and become almost obvious. (And remarkably, one statement also simplifies.)

Let P=(Pθ∣θ∈Θ) be a statistical model, as in the previous section, and Q be a probability measure on the parameter space Θ. Together, P and Q form a Bayesian model, and Q is known as the prior measure in this context.

The product ¯EPEQ of ¯EP and EQ is defined as the class of all measurable functions f:Ω×Θ→[0,∞] such that, for some g∈¯EP and h∈EQ,

is a statistical model with a prior probability measure

Q on Θ, and T is the joint probability measure on Ω×Θ, then

The non-algorithmic formula (6) being simpler than its counterpart in the algorithmic theory of randomness is analogous to the non-algorithmic formula H(x,y)=H(x)+H(y∣x) being simpler than its counterpart K(x,y)=K(x)+K(y∣x,K(x)) in the algorithmic theory of complexity, H being entropy and K being prefix complexity. The fact that K(x,y) does not coincide with K(x)+K(y∣x) to within an additive constant, K being Kolmogorov complexity, was surprising to Kolmogorov and wasn’t noticed for several years [6, 7].

Intuitively, projinfΩf regards ω as typical under the model if it can be extended to a typical (ω,θ) for at least one θ. Let projinfΩET be the set of all such inf-projections.

The results in the rest of this section become simpler if the definitions of classes E and P are modified slightly: we drop the condition of measurability on their elements and replace all integrals by upper integrals and all measures by outer measures. We will use the modified definitions only in the rest of this section (we could have used them in the whole of this paper, but they become particularly useful here since projections of measurable functions do not have to be measurable [18]).

If T is a probability measure on Ω×Θ and Y is its marginal distribution on Ω,

We can combine Propositions 7 and 9 obtaining

The following statements in terms of p-values are cruder, but their interpretation is similar.

We can rewrite (4) in Proposition 6 as

If κ∈(0,1), T is a probability measure on Ω×Θ, and Y is its marginal distribution on Ω,

where projsupΩ is defined similarly to projinfΩ (with sup in place of inf).

As in the proof of Corollary 10, we have

The following definitions are straightforward generalizations of the definitions for the Bayesian case. The joint statistical model T=(Tπ∣π∈Π) on the measurable space Ω×Θ is defined by

Another representation of para-Bayesian models is as a sufficient statistic, as elaborated in [11]:

Yet another way to represent a para-Bayesian model (P,Q) is a Markov family with time horizon 3:

And the inclusion g∈¯EP follows from the fact that, for any θ∈Θ,

De Finetti’s theorem (see, e.g., [15, Theorem 1.49]) establishes a close connection between IID and exchangeability for infinite sequences in Z∞, where Z is a Borel measurable space: namely, the exchangeable probability measures are the convex mixtures of the IID probability measures (in particular, their upper envelopes, and therefore, e- and p-functions, coincide). This subsection discusses a somewhat less close connection in the case of sequences of a fixed finite length.

holds for almost all ω∈Ω (under any IID probability measure).

It is true that

In this section we apply the definitions and results of the previous sections to the problem of defining Bernoulli sequences. Kolmogorov’s main publications on this topic are [7] and [8]. The results of this section will be algorithm-free versions of the results in [19] (also described in V’yugin’s review [25], Sections 11–13).

The product EexchEbin of Eexch and Ebin is the set of all functions ω∈Ω↦g(ω)h(+ω) for g∈Eexch and h∈Ebin. The following is a special case of Corollary 15.

It is true that

Kolmogorov’s definition of Bernoulli sequences is via exchangeability. We can regard this definition as an approximation to definitions taking into account the binomiality of the number of 1s. In the paper [7] Kolmogorov uses the word “approximately” when introducing his notion of Bernoulliness (p. 663, lines 5–6 after the 4th displayed equation). However, it would be wrong to assume that here he acknowledges disregarding the requirement that the number of 1s should be binomial; this is not what he meant when he used the word “approximately” [10].

The reason for Kolmogorov’s definition of Bernoulliness being different from the definitions based on e-values and p-values is that +ω carries too much information about ω; intuitively [20], +ω contains not only useful information about the probability p

of 1 but also noise. To reduce the amount of noise, we will use an imperfect estimator of

For some universal constant c>0,

In conclusion of this section, let us extract corollaries in terms of p-values from Corollary 16 and Theorem 18; we will use the obvious notation PBern, Pexch, and Pbin.

Similarly to Corollary 10, the left inclusion of (10) follows from

and the right inclusion of (10) follows from

As in the previous proof, the left inclusion of (11) follows from

and the right inclusion from

where c stands for a positive universal constant. ∎

In this section we discuss some directions of further research. A major advantage of the non-algorithmic approach to randomness proposed in this paper is the absence of unspecified constants; in principle, all constants can be computed. The most obvious open problem is to find the best constant c in Theorem 18.

In Section 6 we discussed a possible implementation of Kolmogorov’s idea of defining Bernoulli sequences. However, Kolmogorov’s idea was part of a wider programme; e.g., in [8, Section 5] he sketches a way of applying a similar approach to Markov sequences. For other possible applications, see [23, Section 4] (most of these applications were mentioned by Kolmogorov in his papers and talks). Analogues of Corollary 16 in Section 6 can be established for these other applications (cf. [11] and Remark 12), but it is not obvious whether Theorem 18 can be extended in a similar way.