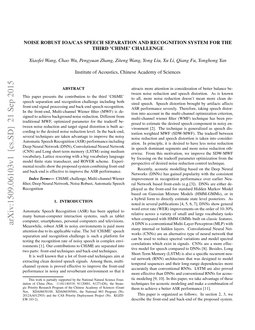 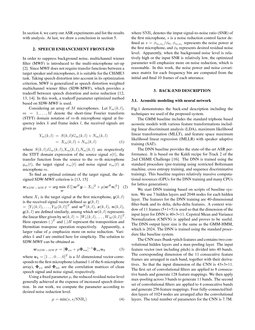 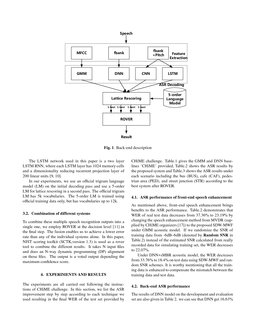 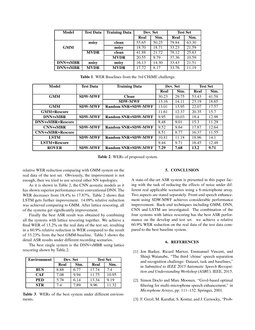 On The Compensation Between Magnitude and Phase in Speech Separation

Optimizing Speech Recognition For The Edge

Automatic Speech Recognition (ASR) has been applied to many human-computer interaction systems, such as tablet computer, smartphones, personal computers and televisions. Meanwhile, robust ASR in noisy environments is paid more attention due to its applicable value. The 3rd ’CHiME’ speech separation and recognition challenge is such a platform for testing the recognition rate of noisy speech in complex environments [1]. Our contributions to CHiME are separated into two parts: front-end techniques and back-end techniques.

It is well known that a lot of front-end techniques aim at extracting clean desired speech signals. Among them, multi-channel system is proved effective to improve the front-end performance in noisy and reverberant environment so that it attracts more attention in consideration of better balance between noise reduction and speech distortion. As is known to all, more noise reduction doesn’t mean more clean desired speech. Speech distortion brought by artifacts affects ASR performance severely. Therefore, taking speech distortion into account in the multi-channel optimization criterion, multi-channel wiener filter (WMF) technique has been proposed to estimate the desired speech component in noisy environment

Recently, acoustic modelling based on the Deep Neural Networks (DNNs) has gained popularity with the consistent improvement in recognition performance over earlier Neural Network based front-ends (e.g.[3]

). DNNs are either deployed as the front-end for standard Hidden Markov Model based on Gaussian Mixture Models (HMM-GMMs), or in a hybrid form to directly estimate state level posteriors. As noted in several publications

, DNNs show general word error rate (WER) improvements on the order of 10-30% relative across a variety of small and large vocabulary tasks when compared with HMM-GMMs built on classic features. A DNN is a conventional Multi-Layer Perceptron (MLP) with many internal or hidden layers. Convolutional Neural Networks (CNNs) are an alternative type of neural network that can be used to reduce spectral variations and model spectral correlations which exist in signals. CNNs are a more effective model for speech compared to DNNs

[9, 10]. In this paper, we take advantage of these techniques for acoustic modeling and make a combination of them to achieve a better ASR performance [11].

This paper is organized as follows. In section 2, 3, we describe the front-end and back-end of the proposed system. In section 4, we carry out ASR experiments and list the results with analysis. At last, we draw a conclusion in section 5.

In order to suppress background noise, multichannel wiener filter (MWF) is introduced to the multi-microphone set-up [2]. Since MWF does not require transfer functions between a target speaker and microphones, it is suitable for the CHiME3 task. Taking speech distortion into account in its optimization criterion, MWF is generalized as speech distortion weighted multichannel wiener filter (SDW-MWF), which provides a tradeoff between speech distortion and noise reduction [12, 13, 14]. In this work, a tradeoff parameter optimized method based on SDW-MWF is used.

m-th microphone signal at frequency index k and frame index l, the received signals are given as

where S(k,l),Gm(k,l),Xm(k,l),Nm(k,l) are respectively the STFT domain expression of the source signal s(t), the transfer function from the source to the m-th microphone gm(t), the target signal xm(t) and noise signal nm(t) at microphone m.

To find an optimal estimate of the target signal, the designed SDW-MWF criterion is [13, 15]

where X1 is the target signal at the first microphone, y(k,l)

is the received signal vector defined as

y(k,l)=[Y1(k,l),…,YM(k,l)]T and wH(k,l), x(k,l), n(k,l), g(k,l) are defined similarly, among which w(k,l) represents the linear filter given by w(k,l)=[W1(k,l),…,WM(k,l)]T. Here operators (.)T and (.)H represent the transposition and Hermitian transpose operation respectively. Apparently, a larger value of μ emphasize more on noise reduction. Variables k and l are omitted here for simplicity. The solution to SDW-MWF can be obtained as

where u1=[1…0…0]T is a M-dimensional vector corresponds to the first microphone (channel 1 of the 6-microphone array), Φxx and Φnn are the correlation matrices of clean speech signal and noise signal, respectively.

Using a fixed parameter μ, the reduced residual noise level generally achieved at the expense of increased speech distortion. In our work, we compute the parameter according to desired noise reduction level.

denotes the imput signal-to-noise ratio (SNR) of the first microphone,

s is a noise reduction control factor defined as s=ϕn1n1/ϕ0, ϕn1n1 represents the noise power at the first microphone, and ϕ0 represents desired residual noise level. Apparently, when the background noise level is relatively high or the input SNR is relatively low, the optimized parameter will emphasize more on noise reduction, which is reasonable. In this work, the noise power and noise covariance matrix for each frequency bin are computed from the initial and final 10 frames of each utterance.

Fig.1 demonstrates the back-end description including the techniques we used of the proposed system.

The DNN baseline provides the state-of-the-art ASR performance. It is based on the Kaldi recipe for Track 2 of the 2nd CHiME Challenge [16]

We start DNN training based on scripts of baseline system. We use 7 hidden layers and 2048 nodes for each hidden layer. The features for the DNN training are 40-dimensional filter-bank and its delta, delta-delta features. A context window of 11 frames (5+1+5) is used so that the dimension of the input layer for DNN is 40∗3∗

11. Cepstral Mean and Variance Normalization (CMVN) is applied and proves to be useful. The DNN output layer size is the same as the GMM-HMM, which is 2024. The DNN is trained using the standard procedure like baseline system.

The CNN uses fbank+pitch features and contains two convolutional hidden layers and a max-pooling layer. The input feature vector (not including pitch) is divided into 40 bands. The corresponding dimension of the 11 consecutive feature frames are arranged in each band, together with their derivatives. So that the input dimension of the CNN is 43

The LSTM network used in this paper is a two layer LSTM RNN, where each LSTM layer has 1024 memory cells and a dimensionality reducing recurrent projection layer of 200 linear units [9, 10].

To combine these multiple speech recognition outputs into a single one, we employ ROVER at the decision level [11] in the final step. The fusion enables us to achieve a lower error rate than any of the individual systems alone. In this paper, NIST scoring toolkit (SCTK,version 1.3) is used as a rover tool to combine the different results. It takes N input files and does an N-way dynamic programming (DP) alignment on those files. The output is a voted output depending the maximum confidence score.

The experiments are all carried out following the instructions of CHiME challenge. In this section, we list the ASR improvement step by step according to each technique we used resulting in the final WER of the test set provided by CHiME challenge. Table.1 gives the GMM and DNN baselines ’CHiME’ provided, Table.2 shows the ASR results by the proposed system and Table.3 shows the ASR results under each scenario including the bus (BUS), cafe (CAF), pedestrian area (PED), and street junction (STR) according to the best system after ROVER.

As mentioned above, front-end speech enhancement brings benefits to the ASR performance. Table.2 demonstrates that WER of real test data decreases from 37.36% to 23.19% by changing the speech enhancement method from MVDR (supplied by CHiME organizers [17]) to the proposed SDW-MWF under GMM acoustic model. If we randomize the SNR of training data from -6dB–6dB (denoted by Random SNR in Table.2) instead of the estimated SNR calculated from really recorded data for simulating training set, the WER decreases to 22.07%.

Under DNN+sMBR acoustic model, the WER decreases from 33.76% to 18.4% on test data using SDW-MWF and random SNR schemes. It is worthy mentioning that all the training data is enhanced to compensate the mismatch between the training data and test data.

The results of DNN model on the development and evaluation set are also given in Table 2. we can see that DNN get 16.63% relative WER reduction comparing with GMM system on the real data of the test set. Obviously, the improvement is not enough, then we tried to use several other NN topologies.

As it is shown in Table 2, the CNN acoustic models as it has shown superior performance over conventional DNN. The WER decreases from 18.4% to 17.87%. Table 2 shows that LSTM gets further improvement. 14.09% relative reduction was achieved comparing to GMM. After lattice rescoring, all of the systems get significantly improvement.

Finally the best ASR result was obtained by combining all the systems with lattice rescoring together. We achieve a final WER of 13.2% on the real data of the test set, resulting in a 60.9% relative reduction in WER compared to the result of 33.23% from the best GMM-baseline. Table.3 shows the detail ASR results under different recording scenarios.

The best single system is the DNN+sMBR using lattice rescoring shown by Table.2.

A state-of-the-art ASR system is presented in this paper facing with the task of reducing the effects of noise under different real applicable scenarios using a 6-microphone array. Two aspects are stated separately. Front-end speech enhancement using SDW-MWF achieves considerable performance improvement. Back-end techniques including GMM, DNN, CNN and LSTM are investigated. The combination of the four systems with lattice rescoring has the best ASR performance on the develop and test set. we achieve a relative 60.9% WER reduction on the real data of the test data compared to the best baseline system.