The pre-trained language models have achieved great successes in various natural language understanding (NLU) tasks due to its capacity to capture the deep contextualized information in text by pre-training on large-scale corpora. In this technical report, we present our practice of pre-training language models named NEZHA (NEural contextualiZed representation for CHinese lAnguage understanding) on Chinese corpora and finetuning for the Chinese NLU tasks. The current version of NEZHA is based on BERT with a collection of proven improvements, which include Functional Relative Positional Encoding as an effective positional encoding scheme, Whole Word Masking strategy, Mixed Precision Training and the LAMB Optimizer in training the models. The experimental results show that NEZHA achieves the state-of-the-art performances when finetuned on several representative Chinese tasks, including named entity recognition (People's Daily NER), sentence matching (LCQMC), Chinese sentiment classification (ChnSenti) and natural language inference (XNLI). 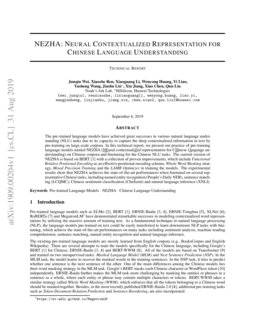 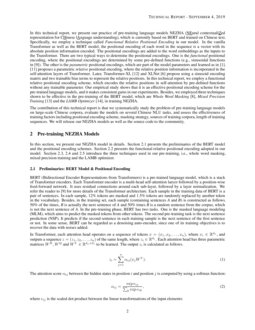 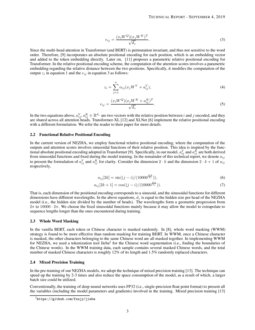 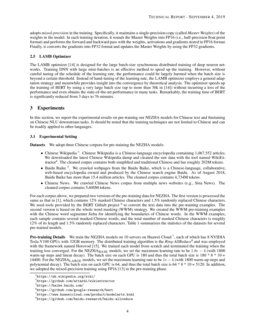 AnchiBERT: A Pre-Trained Model for Ancient ChineseLanguage Understanding and Generation

have demonstrated remarkable successes in modeling contextualized word representations by utilizing the massive amount of training text. As a fundamental technique in natural language processing (NLP), the language models pre-trained on text could be easily transferred to learn downstream NLP tasks with finetuning, which achieve the state-of-the-art performances on many tasks including sentiment analysis, machine reading comprehension, sentence matching, named entity recognition and natural language inference.

The existing pre-trained language models are mostly learned from English corpora (e.g., BooksCorpus and English Wikipedia). There are several attempts to train the models specifically for the Chinese language, including Google’s BERT [devlin2019BERT] for Chinese, ERNIE-Baidu [sun2019ernie, sun2019ernie2] and BERT-WWM [cui2019pre]. All of the models are based on Transformer [vaswani2017attention] and trained on two unsupervised tasks: Masked Language Model (MLM) and Next Sentence Prediction (NSP). In the MLM task, the model learns to recover the masked words in the training sentences. In the NSP task, it tries to predict whether one sentence is the next sentence of the other. One of the main differences among the Chinese models lies their word masking strategy in the MLM task. Google’s BERT masks each Chinese character or WordPiece token [wu2016google] independently. ERNIE-Baidu further makes the MLM task more challenging by masking the entities or phrases in a sentence as a whole, where each entity or phrase may contain multiple characters or tokens. BERT-WWM takes a similar strategy called Whole Word Masking (WWM), which enforces that all the tokens belonging to a Chinese word should be masked together. Besides, in the most recently published ERNIE-Baidu 2.0 [sun2019ernie2], additional pre-training tasks such as Token-Document Relation Prediction and Sentence Reordering, are also incorporated.

In this technical report, we present our practice of pre-training language models NEZHA (NEural contextualiZed representation for CHinese lAnguage understanding), which is currently based on BERT and trained on Chinese text. Specifically, we employ a technique called Functional Relative Positional Encoding

The contribution of this technical report is that we systematically study the problem of pre-training language models on large-scale Chinese corpora, evaluate the models on several Chinese NLU tasks, and assess the effectiveness of training factors including positional encoding scheme, masking strategy, sources of training corpora, length of training sequences. We will release our NEZHA models as well as the source code to the community.

[vaswani2017attention] for more details of the Transformer architecture. Each sample in the training data of BERT is a pair of sentences. In each sample, 12% tokens are masked and 1.5% tokens are randomly replaced by another token in the vocabulary. Besides, in the training set, each sample (containing sentences A and B) is constructed as follows. 50% of the times, B is actually the next sentence of A and 50% times B is a random sentence from the corpus, which is not the next sentence of A. In the pre-training phase, BERT has two tasks. One is the masked language modeling (MLM), which aims to predict the masked tokens from other tokens. The second pre-training task is the next sentence prediction (NSP). It predicts if the second sentence in each training sample is the next sentence of the first sentence or not. In some sense, BERT can be regarded as a denoising auto-encoder, since one of its training objectives is to recover the data with noises added.

In Transformer, each attention head operates on a sequence of tokens x=(x1,x2,…,xn), where xi∈Rdx, and outputs a sequence z=(z1,z2,…,zn) of the same length, where zi∈Rdz. Each attention head has three parametric matrices WK,WQ and WV∈Rdx×dz to be learned. The output zi is calculated as follows.

The attention score αij between the hidden states in position i and position j is computed by using a softmax function:

is the scaled dot product between the linear transformations of the input elements:

Since the multi-head attention in Transformer (and BERT) is permutation invariant, and thus not sensitive to the word order. Therefore, [vaswani2017attention] incorporates an absolute positional encoding for each position, which is an embedding vector and added to the token embedding directly. Later on,  [shaw2018self] proposes a parametric relative positional encoding for Transformer. In the relative positional encoding scheme, the computation of the attention scores involves a parametric embedding regarding the relative distance between the two positions. Specifically, it modifies the computation of the output zi in equation 1 and the eij in equation 3 as follows:

In the two equations above, aVij, aKij∈Rdz are two vectors with the relative position between i and j encoded, and they are shared across all attention heads. Transformer-XL [dai2019transformer] and XLNet [yang2019xlnet] implement the relative positional encoding with a different formulation. We refer the reader to their paper for more details.

In the current version of NEZHA, we employ functional relative positional encoding, where the computation of the outputs and attention scores involves sinusoidal functions of their relative position. This idea is inspired by the functional absolute positional encoding adopted in Transformer [vaswani2017attention]. Specifically, in our model, aVij and aKij are both derived from sinusoidal functions and fixed during the model training. In the remainder of this technical report, we denote aij to present the formulation of aVij and aKij for clarity. Consider the dimension 2⋅k and the dimension 2⋅k+1 of aij respectively,

That is, each dimension of the positional encoding corresponds to a sinusoid, and the sinusoidal functions for different dimensions have different wavelengths. In the above equations, dz is equal to the hidden size per head of the NEZHA model (i.e., the hidden size divided by the number of heads). The wavelengths form a geometric progression from 2π to 10000⋅2π. We choose the fixed sinusoidal functions mainly because it may allow the model to extrapolate to sequence lengths longer than the ones encountered during training.

In the pre-training of our NEZHA models, we adopt the technique of mixed precision training [micikevicius2017mixed]. The technique can speed up the training by 2-3 times and also reduce the space consumption of the model, as a result of which, a larger batch size could be utilized.

Conventionally, the training of deep neural networks uses FP32 (i.e., single-precision float point format) to present all the variables (including the model parameters and gradients) involved in the training. Mixed precision training

is designed for the large batch-size synchronous distributed training of deep neuron networks. Training DNN with large mini-batches is an effective method to speed up the training. However, without careful tuning of the schedule of the learning rate, the performance could be largely harmed when the batch size is beyond a certain threshold. Instead of hand-tuning of the learning rate, the LAMB optimizer employs a general adaptation strategy and meanwhile provides insight into the convergence by theoretical analysis. The optimizer speeds up the training of BERT by using a very large batch size (up to more than 30k in

[you2019reducing]) without incurring a loss of the performance and even obtains the state-of-the-art performance in many tasks. Remarkably, the training time of BERT is significantly reduced from 3 days to 76 minutes.

In this section, we report the experimental results on pre-training our NEZHA models for Chinese text and finetuning on Chinese NLU downstream tasks. It should be noted that the training techniques are not limited to Chinese and can be readily applied to other languages.

We adopt three Chinese corpora for pre-training the NEZHA models:

For each corpus above, we prepared two versions of the pre-training data for NEZHA. The first version is processed the same as that in [devlin2019BERT], which contains 12% masked Chinese characters and 1.5% randomly replaced Chinese characters. We used tools provided by the BERT Github project 666https://github.com/google-research/bert to convert the text data into the pre-training examples. The second version is based on the whole word masking (WWM) strategy. We created the WWM pre-training examples with the Chinese word segmenter Jieba for identifying the boundaries of Chinese words. In the WWM examples, each sample contains several masked Chinese words, and the total number of masked Chinese characters is roughly 12% of its length and 1.5% randomly replaced characters. Table 1 summarizes the statistics of the datasets for several pre-trained models.

2.0 introduced many different pre-training tasks and we refer the readers to thier papers for the details of these tasks. As shown in the table, the unique technique in our models is the functional relative position encoding. We test the performances of the pre-trained models by finetuning on a variety of natural language understanding (NLU) tasks, which are listed as follows. The hyperparameters of finetuning each task are shown in Table

We show the comparison results of different pre-trained models on the aforementioned tasks in Table 4. Among the groups of both base models and large models, either ERNIE-Baidu 2.0 or NEZHA achieves the best performances. Note that the part of the results are directly copied from the original papers [cui2019pre, sun2019ernie2]. Due to the possible differences in the experimental setting or finetuning methods, the comparison may not be entirely fair. We notice that there is consistent gaps between our implementation and the results reported in [cui2019pre, sun2019ernie2] on the CMRC task. Once the ERNIE-Baidu 2.0 Chinese models are released, we will evaluate them under the same setting and update this report.

In this section, we study the effectiveness of the data and different techniques for training NEZHA, which are listed as follows.

In the technical report, we have presented our practice on training the large scale pre-trained language models NEZHA on Chinese corpora. We have employed an effective functional relative positional encoding scheme, which leads to notable improvement over the other positional encodings. The pre-training of the NEZHA models also integrates several techniques, including whole word masking strategy, mixed precision training, and the LAMB optimizer. Experiments show that our models can achieve state-of-the-art performances on several Chinese natural language understanding tasks. In the future, we plan to continue the work on improving NEZHA on Chinese and other languages and extend the applications of NEZHA to more scenarios.