The history of AI has included several "waves" of ideas. The first wave, from the mid-1950s to the 1980s, focused on logic and symbolic hand-encoded representations of knowledge, the foundations of so-called "expert systems". The second wave, starting in the 1990s, focused on statistics and machine learning, in which, instead of hand-programming rules for behavior, programmers constructed "statistical learning algorithms" that could be trained on large datasets. In the most recent wave research in AI has largely focused on deep (i.e., many-layered) neural networks, which are loosely inspired by the brain and trained by "deep learning" methods. However, while deep neural networks have led to many successes and new capabilities in computer vision, speech recognition, language processing, game-playing, and robotics, their potential for broad application remains limited by several factors. A concerning limitation is that even the most successful of today's AI systems suffer from brittleness-they can fail in unexpected ways when faced with situations that differ sufficiently from ones they have been trained on. This lack of robustness also appears in the vulnerability of AI systems to adversarial attacks, in which an adversary can subtly manipulate data in a way to guarantee a specific wrong answer or action from an AI system. AI systems also can absorb biases-based on gender, race, or other factors-from their training data and further magnify these biases in their subsequent decision-making. Taken together, these various limitations have prevented AI systems such as automatic medical diagnosis or autonomous vehicles from being sufficiently trustworthy for wide deployment. The massive proliferation of AI across society will require radically new ideas to yield technology that will not sacrifice our productivity, our quality of life, or our values. 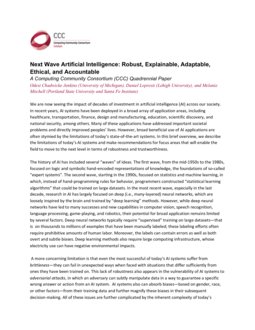 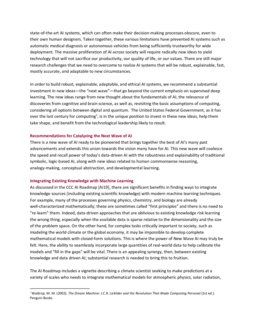 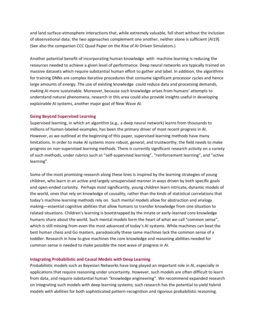 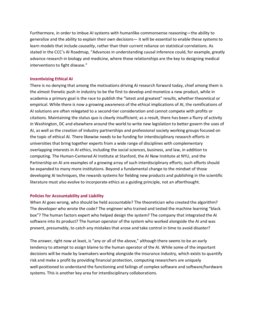