Recently, we have shown that the age-specific prevalence of a disease can be related to the transition rates in the illness-death model via a partial differential equation (PDE). In case of a chronic disease, we show that the PDE can be used to estimate excess mortality from prevalence and incidence. Applicability of the new method is demonstrated in a simulation and claims data about diabetes in German men. 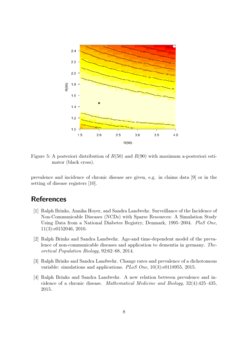 Recently, we have shown that the age-specific prevalence of a health state or disease can be related to the transition rates in the illness-death model (IDM) via a partial differential equation (PDE) [2, 3]. In case of a chronic disease, this relation can be used to estimate the incidence from a sequence of cross-sectional studies if information about mortality is available [4, 1].

In this paper, we demonstrate that it is also possible to estimate excess mortality from prevalence and incidence of a chronic disease, which can be useful for the analysis of data from disease registers or health insurance claims. For this, we examine the relations of the illness-death model and associated PDEs. In this context, we derive a new PDE which generalises the PDE of Brunet and Struchiner [6]

. In a simulation study, the new PDE is used to demonstrate how the excess mortality can be estimated directly. Furthermore, we present an estimation method in the framework of Bayesian statistics. In an application of the Bayesian approach, we estimate the excess mortality of diabetes from claims data comprising 70 million Germans.

Let the numbers H and I denote the numbers of people in the respective states. To be more specific, H(t,a) is the number of healthy people aged a, a≥0, at time t; and I(t,a,d) is the number of diseased people aged a, a≥0, at t who are diseased for the duration d, d≥0. We assume that the considered population is sufficiently large that H and I can be considered as smooth functions. The total number of subjects aged a at t who have the chronic disease is I⋆(t,a)=∫a0I(t,a,δ)dδ.

Let us furthermore assume that the considered population is closed, i.e., there is no migration and that the disease is contracted after birth. The later assumption implies I⋆(t,0)=0 for all t. Then, we can formulate following equations for the change rates of H and I:

where ∂x means the partial derivative with respect to x, i.e., ∂x=∂∂x for x∈{t,a,d}.

In addition to the PDEs (1) – (2)), which describe the outflows from the states Healthy and Ill, we need the following initial conditions:

For the second equality we used ∂I⋆=−m⋆1I⋆+iH, which has been proven in the Appendix of [4]. The rate m⋆1 is defined as

The rate m⋆1 may be accessible in epidemiological surveys by choosing a sample population with representative distribution of disease duration. However, in most practical cases, it is unknown because the distribution I(t,a,d)∫a0I(t,a,δ)dδ in Eq. (3) is not known.

For our purpose of estimating the excess mortality Δm=m⋆1−m0, Eq. (4) is very useful, because it holds

An advantage of the approach of Brunet and Struchiner lies in an explicit representation of the prevalence-odds in case the rates i,m0 and m1 are given. Then starting from Eq. (1) – (2) combined with the initial conditions of above, we obtain following equation by using calculus:

With π=p1−p, we see that Eq. (8) is a generalisation of Eq. (1) in [3]. One advantage of the explicit representation of π in (8) is the possibility to (numerically) calculate π with a prescribed accuracy, e.g. by Romberg integration [8], which we will use in the examples below. Numerical solutions of differential equations usually do not allow prescribed levels of accuracy.

The first example is about a hypothetical chronic disease with all time-scales t,a and d playing a role. The incidence of the chronic disease is assumed to be i(t,a)=(a−30)+3000, which implies that the disease affects only people aged 30 and older. The age-specific mortality rate of the non-diseased is chosen to be m0(t,a)=exp(−10.7+0.1a+tln(0.98)). In addition, we assume that the mortality m1 of the diseased can be written as a product of m0 and a factor that depends only on the duration d:

Except for the time trend in m0, this example is the same as Simulation 2 in [5].

For the example, we mimic the situation that we have three cross-sectional studies in the years t0=95,t1=100, and t2=105. We calculate the prevalence odds π for these years via Eq. (8). Figure 2 shows the prevalence-odds for the three years. Until age of about 70 years, the three prevalence-odds are virtually the same. For our example, we additonally assume that we have the age-specific incidence rate available for the year t1=100. The aim is to estimate the excess mortality in t1.

The proposed method to estimate the excess mortality Δm in the year t1=100 is direct application of Eq. (7). As assumed the incidence i for t1=100 is assumed to be given. The partial derivative ∂π is approximated by following finite difference:

Then, we the excess mortality Δm can be estimated by plugging these numbers into Eq. (7). In case the mortality rate m0 of the non-diseased is known, Δm is often expressed in terms of the hazard ratio R=m⋆1m0 which can be obtained from

The second example is about claims data from Germany during the years 2009 to 2015. Goffrier and colleagues reported the age-specific prevalence of diabetes of German men in the years t0=2009 and t1=2015 as shown in Figure 4, [9].

Based on the incidence rate (i) in 2012 (reported in Table 5 of [9]), our aim is to estimate the age-specific hazard ratio R(a) for the same year. For this, we use a Bayes approach. Motivated by empirical findings from the Danish diabetes register, we assume that the logarithm of the age-specific HR R approximately is a straight line in the age range 50 to 90 years of age (see Figure 5 in [7]). Thus, we make the approach

means the uniform distribution. In Bayes terminology, our aim is to estimate a-posteriori distributions for

This done by randomly drawing R(50) and R(90) from the prior distributions, solving the PDE (6) with initial condition p(2009,a). For solving the PDE, we use the Method of Characteristics [11] to convert Eq. (6

In this work, we have described how the illness-death model can be used to obtain information about mortality in case prevalence and incidence are given. This allows insights into the excess mortality of people with chronic diseases compared to the people without the disease or the general population.

We presented two methods of estimating excess mortality, one direct estimation method and one method in the context of Bayesian statistics. The methods can be used if prevalence and incidence of chronic disease are given, e.g. in claims data [9] or in the setting of disease registers [10].