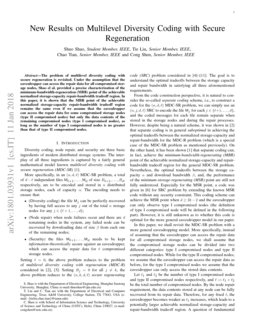 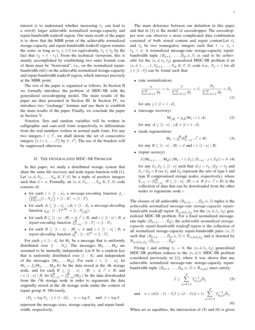 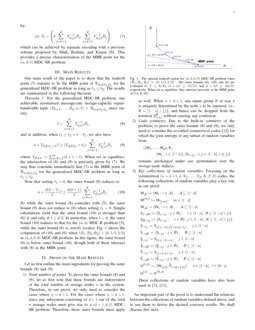 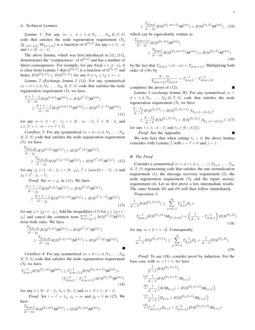 More specifically, in an (n,d,ℓ) MDC-SR problem, a total of d−ℓ independent files Mℓ+1,…,Md of size Bℓ+1,…,Bd, respectively, are to be encoded and stored in n distributed storage nodes, each of capacity α. The encoding needs to ensure that:

Setting ℓ=0, the above problem reduces to the problem of multilevel diversity coding with regeneration (MDC-R) considered in [2, 3]. Setting Bj=0 for all j≠k, the above problem reduces to the (n,k,d,ℓ) secure regenerating code (SRC) problem considered in [4, 5, 6, 7, 8, 9, 10, 11]. The goal is to understand the optimal tradeoffs between the storage capacity and repair bandwidth in satisfying all three aforementioned requirements.

From the code construction perspective, it is natural to consider the so-called separate coding scheme, i.e., to construct a code for the (n,d,ℓ) MDC-SR problem, we can simply use an (n,j,d,ℓ) SRC to encode the file Mj for each j∈{ℓ+1,…,d}, and the coded messages for each file remain separate when stored in the storage nodes and during the repair processes. However, despite being a natural scheme, it was shown in [2] that separate coding is in general suboptimal in achieving the optimal tradeoffs between the normalized storage-capacity and repair-bandwidth for the MDC-R problem (which is a special case of the MDC-SR problem as mentioned previously). On the other hand, it has been shown [1] that separate coding can, in fact, achieve the minimum-bandwidth-regenerating (MBR) point of the achievable normalized storage-capacity and repair-bandwidth tradeoff region for the general MDC-SR problem. Nevertheless, the optimal tradeoffs between the storage capacity α and download bandwidth β, and, the performance of the minimum-storage-regenerating (MSR) point are still not fully understood. Especially for the MSR point, a code was given in [6] for SRC problem by extending the known MSR code without any security constraint. This coding scheme can achieve the MSR point when d≥2k−2 and the eavesdropper can only observe type I compromised nodes (the definition of type I compromised node will be defined in the following part). However, it is still unknown as to whether this code is optimal for the more general eavesdropper model in our paper.

. Sets and random variables will be written in calligraphic and sans-serif fonts respectively, to differentiate from the real numbers written in normal math fonts. For any two integers

t≤t′, we shall denote the set of consecutive integers {t,t+1,…,t′} by [t:t′]. The use of the brackets will be suppressed otherwise.

be a message that is uniformly distributed over

The main deference between our definition in this paper and that in [1] is the model of eavesdropper. The eavesdropper now can observer a more complicated data combination consisted of both stored content and repair content.Let ℓ1 and ℓ2 be two nonnegative integers such that ℓ:=ℓ1+ℓ2<d. A normalized message-rate storage-capacity repair-bandwidth tuple (¯Bℓ+1, …,¯Bd,¯α,¯β) is said to be achievable for the (n,d,ℓ1,ℓ2) generalized MDC-SR problem if an (n,d,1,…,1,Nℓ+1,…,Nd,K,T,S) code (i.e., Nj=1 for all j∈[1:ℓ]) can be found such that:

When set as equalities, the intersection of (5) and (6) is given by:

which can be achieved by separate encoding with a previous scheme proposed by Shah, Rashmi, and Kumar [6]. This provides a precise characterization of the MBR point for the (n,d,ℓ) MDC-SR problem.

Our main result of the paper is to show that the tradeoff point (7) remains to be the MBR point of Rn,d,ℓ1,ℓ2 for the generalized MDC-SR problem as long as ℓ1≤ℓ2. The results are summarized in the following theorem.

Note that setting ℓ1=0, the outer bound (9) reduces to

Iv Proof of the Main Results

Let us first outline the main ingredients for proving the outer bounds (8) and (9).

An important part of the proof is to understand the relations between the collections of random variables defined above, and to use them to derive the desired converse results. We shall discuss this next.

which can be equivalently written as

For any symmetrical (n=d+1,d,N1, …,Nd,K,T,S) code that satisfies the node regeneration requirement (3), we have

follows from the chain rule for entropy;