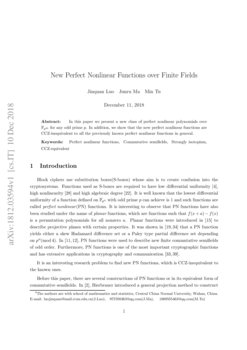 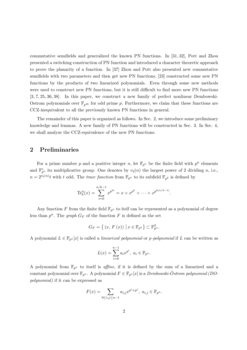 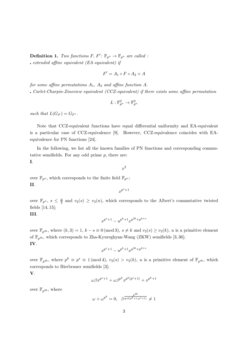 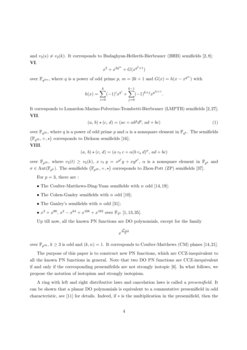 Block ciphers use substitution boxes(S-boxes) whose aim is to create confusion into the cryptosystems. Functions used as S-boxes are required to have low differential uniformity [4], high nonlinearity [28] and high algebraic degree [22]. It is well known that the lowest differential uniformity of a function defined on Fpn with odd prime p can achieve is 1 and such functions are called perfect nonlinear(PN) functions. It is interesting to observe that PN functions have also been studied under the name of planar functions, which are functions such that f(x+a)−f(x) is a permutation polynomials for all nonzero a. Planar functions were introduced in [15] to describe projective planes with certain properties. It was shown in [19, 34]

pn(mod4). In [11, 12], PN functions were used to describe new finite commutative semifields of odd order. Furthermore, PN functions is one of the most important cryptographic functions and has extensive applications in cryptography and communication[33, 39].

It is an interesting research problem to find new PN functions, which is CCZ-inequivalent to the known ones.

The remainder of this paper is organized as follows. In Sec. 2, we introduce some preliminary knowledge and lemmas. A new family of PN functions will be constructed in Sec. 3. In Sec. 4, we shall analyze the CCZ-equivalence of the new PN functions.

For a prime number p and a positive integer n, let Fpn be the finite field with pn elements and F∗pn its multiplicative group. One denotes by v2(n) the largest power of 2 dividing n, i.e., n=2v2(n)t with t odd. The trace function from Fpn to its subfield Fpk is defined by

Any function F from the finite field Fpn to itelf can be represented as a polynomial of degree less than pn. The graph GF of the function F is defined as the set

A polynomial from Fpn to itself is affine, if it is defined by the sum of a linearized and a constant polynomial over Fpn. A polynomial F∈Fpn[x] is a Dembowski-¨Ostrom polynomial (DO-polynomial) if it can be expressed as

In the following, we list all the known families of PN functions and corresponding commutative semifields. For any odd prime p, there are: I.

over Fpn, which corresponds to the finite field Fpn; II.

Up till now, all the known PN functions are DO polynomials, except for the family

A presemifield with a multiplicative identity is called a semifield. Any finite presemifield can be represented by S=(Fpn,+,⋆), where (Fpn,+) is the additive group of Fpn, but may have different multiplication in S, see [11] for more details.

In the following, we shall define the dual and transpose of a presemifield, which yields the definition of symplectic presemifield.

Particularly, for S=Fpn, we define

are the spread set associated with S and S∗, respectively. For any φ(x)=n−1∑i=0θixpi∈V with x∈Fpn, the conjugate ¯¯¯¯φ of φ is defined by

The following lemma characterizes a consistency of isotopism between two presemifields and their symplectic presemifields.

Next, some criteria commonly used to prove the CCZ-inequivalence among the new PN functions and the functions V and VI is recalled from [29] in the following.

([29]) Let q be an odd prime power, l and d be odd and even integers, respectively, such that 0<d<2l and gcd(l,d)=1. Then the corresponding symplectic presemifield of the functions V is

whose multiplication is given by

([29]) Let q be an odd prime power, l and d be odd and even integers, respectively, such that 0<d<2l and gcd(l,d)=1. Then the corresponding symplectic presemifield of the functions VI is

whose multiplication is given by

A new class of PN functions over Fpn with n=2k is proposed as follows.

Let p be an odd prime, n=2k, s and kbe positive integers such that

is PN over Fpn.

Since f is a DO polynomial, to prove that f is PN, it is sufficient to show that for any a∈F∗pn, the equation

has exactly one solution x=0. It can be verified that

By taking A=axps+apsx and B=Trnk(ax), this equation is equivalent to

Raising both sides of (3) to the power pk, one obtains

That is to say,

Denoting by a=gi with g be a primitive element of Fpn, then one has

is odd, a contradiction. Hence

for any a∈F∗pn. Similarly, (10) derives the equation

which has no solution in Fpn. Indeed, suppose that there exists some positive integer j such that

Consequently, Δf,a(x)=0 has exactly one solution x=0. It follows that f(x) is a PN funtion. ∎

The main result in this section is given by the following theorem.

Let p be an odd prime. The new PN functions in Theorem 1 are CCZ-inequivalent to any of the known PN functions I-VIII listed in Section 2.

When k is odd, without loss of generality, there exists ω∈Fp2∖Fp such that ωpk=−ω. It allows us to choose {1,ω} as an Fpk-basis of Fp2k. Then for any u∈Fp2k, it can be uniquely represented as u=x+yω with x,y∈Fpk. Similarly, for any b∈Fp2k with bpk−1≠−1, it can be uniquely expressed as b=b1+b2ω with b1,b2∈Fpk. It can be verified that

Recall that x∘sy=xpsy+xyps, then the new PN functions in Theorem 1 can be transformed into

In the sequel, the equation (1) mentioned in Section 2 implies that the PN function VII is equivalent to

On the other hand, the proof of Theorem 6 in [37] shows that: i) if σ is non-trivial, then the PN function VIII is equivalent to

ii) if σ is trivial, then the PN function VIII is equivalent to

Similarly, it can be verified that for any b,δ in Theorem 1

, there exists no linear transformation by which the equation (

The equivalence between the new PN functions and the functions I-II is described as follows.

Let p be an odd prime, n=2k, s, k, r be positive integers such that

Furthermore, for r=0, f(x) is also CCZ-inequivalent to x2 over Fpn.

In the following, all the subscripts of dj and ej are regarded as module n. For instance,

Comparing the coefficients of x2pi and x2pi+k with 0≤i≤n−1 on both sides of (18), respectively, we have

a contradiction. It follows that ej=0 holds for any 0≤i≤n−1, which yields

This is impossible since L2(x)=0 cannot be a permutation.

If not all ei=0, then we denote