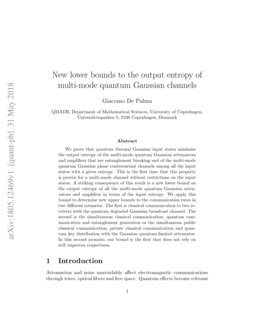 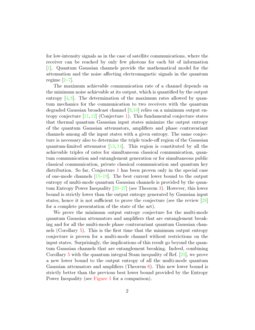 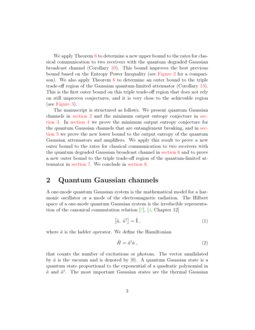 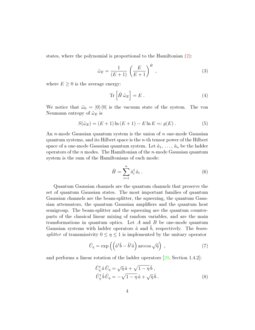 Multi-User Distillation of Common Randomness and Entanglement from Quantum States

The main purpose of this study is to introduce a semi-classical model de...
Salvatore Tirone, et al. ∙

Attenuation and noise unavoidably affect electromagnetic communications through wires, optical fibers and free space. Quantum effects become relevant for low-intensity signals as in the case of satellite communications, where the receiver can be reached by only few photons for each bit of information [chen2012optical]. Quantum Gaussian channels provide the mathematical model for the attenuation and the noise affecting electromagnetic signals in the quantum regime [chan2006free, braunstein2005quantum, holevo2013quantum, weedbrook2012gaussian, holevo2015gaussian, serafini2017quantum].

The maximum achievable communication rate of a channel depends on the minimum noise achievable at its output, which is quantified by the output entropy [wilde2017quantum, holevo2013quantum]. The determination of the maximum rates allowed by quantum mechanics for the communication to two receivers with the quantum degraded Gaussian broadcast channel [guha2007classicalproc, guha2007classical] relies on a minimum output entropy conjecture [guha2008entropy, guha2008capacity] (Conjecture 1). This fundamental conjecture states that thermal quantum Gaussian input states minimize the output entropy of the quantum Gaussian attenuators, amplifiers and phase contravariant channels among all the input states with a given entropy. The same conjecture is necessary also to determine the triple trade-off region of the Gaussian quantum-limited attenuator [wilde2012information, wilde2012quantum]. This region is constituted by all the achievable triples of rates for simultaneous classical communication, quantum communication and entanglement generation or for simultaneous public classical communication, private classical communication and quantum key distribution. So far, Conjecture 1 has been proven only in the special case of one-mode channels [de2015passive, de2016gaussian, de2016pq, de2016gaussiannew, qi2017minimum]. The best current lower bound to the output entropy of multi-mode quantum Gaussian channels is provided by the quantum Entropy Power Inequality [konig2014entropy, konig2016corrections, de2014generalization, de2015multimode, de2017gaussian, de2018conditional, huber2018conditional, huber2017geometric] (see Theorem 3). However, this lower bound is strictly lower than the output entropy generated by Gaussian input states, hence it is not sufficient to prove the conjecture (see the review [de2018gaussian] for a complete presentation of the state of the art).

We apply Theorem 6 to determine a new upper bound to the rates for classical communication to two receivers with the quantum degraded Gaussian broadcast channel (Corollary 10) and a new outer bound to the triple trade-off region of the Gaussian quantum-limited attenuator (Corollary 13). These bounds improve the best previous bounds based on the quantum Entropy Power Inequality (see Figure 2 and Figure 3 for a comparison).

where ^a is the ladder operator. We define the Hamiltonian

that counts the number of excitations or photons. The vector annihilated by

where E≥0 is the average energy:

We notice that ^ω0=|0⟩⟨0| is the vacuum state of the system. The von Neumann entropy of ^ωE is

^a1,…,^an be the ladder operators of the n modes. The Hamiltonian of the n-mode Gaussian quantum system is the sum of the Hamiltonians of each mode:

A and B be one-mode quantum Gaussian systems with ladder operators ^a and ^b, respectively. The beam-splitter of transmissivity 0≤η≤1 is implemented by the unitary operator

and performs a linear rotation of the ladder operators [ferraro2005gaussian, Section 1.4.2]:

and acts on the ladder operators as

The quantum Gaussian attenuators model the attenuation and the noise affecting electromagnetic signals traveling through optical fibers or free space. The one-mode quantum Gaussian attenuator Eη,E [holevo2007one, case (C) with k=√λ and N0=E] can be implemented mixing the input state ^ρ with the one-mode thermal Gaussian state ^ωE through a beam-splitter of transmissivity 0≤η≤1:

If E=0 the attenuator is called quantum-limited, and we denote

The displacement operator ^Dz with z∈C is the unitary operator that displaces the ladder operators:

is the quantum Gaussian channel generated by a convex combination of displacement operators with a Gaussian probability measure:

Conjecture 1 has been proven only in some special cases:

For any n∈N and any state ^ρ of an n-mode Gaussian quantum system with finite average energy,

In this Section, we prove Conjecture 1 for the phase contravariant quantum Gaussian channels and for the quantum Gaussian attenuators and amplifiers that are entanglement breaking. This result is a corollary of the following.

Let A and B be quantum systems with Hilbert spaces HA and HB, and let Φ:A→B be an entanglement breaking quantum channel such that for any quantum state ^ρ on HA

Since Φ is entanglement breaking, it admits a representation as a measure-prepare channel [kholevo2005notion], i.e., there exist a complete separable metric space X, a quantum-classical channel Φ1 that maps quantum states on A to Borel probability measures on X and a classical-quantum channel Φ2 that maps Borel probability measures on X to quantum states on B such that

where we have used the inductive hypothesis (24) and Jensen’s inequality applied to the convex function f. We then have

The following Corollary 5 proves Conjecture 1 for all the channels that are entanglement breaking. This is the first time that Conjecture 1 is proven for multi-mode channels without restrictions on the input states.

A striking consequence of Corollary 5 is the following improved lower bound for the output entropy of the multi-mode quantum Gaussian channels that are not entanglement breaking. We compare in Figure 1 this bound with the previous best bound provided by the quantum Entropy Power Inequality and with the output entropy achieved by quantum thermal Gaussian input states.

For any n∈N and any state ^ρ of an n-mode Gaussian quantum system with finite average energy,

Quantum Gaussian attenuators. We fix 0≤λ≤1 and define for any t≥0

such that E(t∗)=η1−η and the channel Eη,E(t∗) is entanglement breaking. Then, putting together (6) and Corollary 5 we get

and the claim follows.

such that E(t∗)=1κ−1 and the channel Aκ,E(t∗) is entanglement breaking. Then, putting together (6) and Corollary 5 we get

and the claim follows.

Quantum Gaussian additive noise channels. We fix 0≤λ≤1 and define for any t≥0

such that E(t∗)=1 and the channel NE(t∗) is entanglement breaking. Then, putting together (51) and Corollary 5 we get

and the claim follows. ∎

where ^Uη is the unitary operator defined in (7) and 12≤η≤1. The channel can be understood as follows. A encodes the information into the state of the electromagnetic radiation ^ρA, and sends it through a beam-splitter of transmissivity η. A′ and B′ receive the transmitted and the reflected part of the signal, respectively, whose joint state is ^ρA′B′. This channel is called degraded since the state received by B′ can be obtained applying a quantum-limited attenuator to the state received by A′ [guha2007classical]:

The simplest communication strategy is time sharing, which consists in communicating only with A′ for a fraction of the time and only with B′ for the remaining fraction of the time. Superposition coding [yard2011quantum, guha2007classical, savov2015classical] is a more sophisticated strategy that achieves higher rates communicating with A′ and B′ simultaneously. Let E>0 be the maximum average energy per mode of the input states. Superposition coding allows to achieve with the quantum degraded Gaussian broadcast channel (58) any rate pair (RA′,RB′) satisfying [guha2007classical, Sec. IV]

Assuming Conjecture 1 for the quantum-limited attenuator, the capacity region of the quantum degraded Gaussian broadcast channel coincides with the region identified by (60) [guha2007classical], i.e., any achievable rate pair satisfies (60).

Let us suppose that for any n∈N, any 0≤λ≤1 and any input state ^ρ of an n-mode Gaussian quantum system with finite average energy

where the function fλ is increasing and convex. Then, any achievable rate pair (RA′,RB′) for the quantum degraded Gaussian broadcast channel satisfies

where E≥0 is the maximum allowed average energy per mode of the input.

where {p(n)iq(n)j,^ρA(n)i,j}i∈I,j∈J is an ensemble of pure encoding states on n copies of the quantum system A and

and the average state satisfies the energy constraint

where ^H is the Hamiltonian on n copies of B′, hence

where we have used that quantum thermal Gaussian states maximize the entropy among all the states with the same average energy. From (59) we have for any i∈I

Since f1−ηη is convex and increasing, we have from Jensen’s inequality and (70)