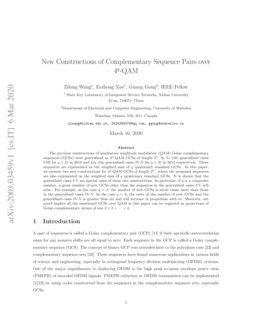 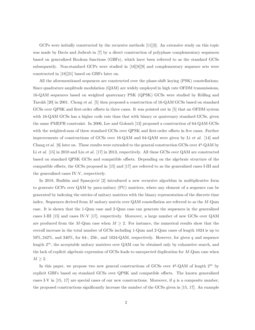 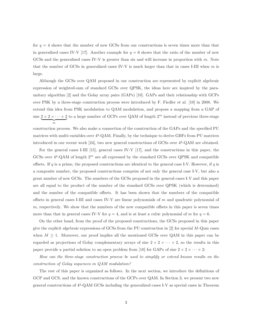 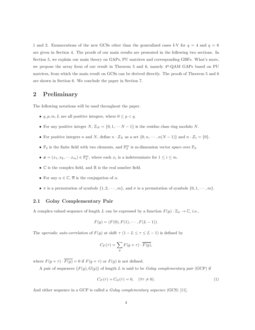 A pair of sequences is called a Golay complementary pair (GCP) [11] if their aperiodic autocorrelation sums for any nonzero shifts are all equal to zero. Each sequence in the GCP is called a Golay complementary sequence (GCS). The concept of binary GCP was extended later to the polyphase case [22] and complementary sequence sets [23]. These sequences have found numerous applications in various fields of science and engineering, especially in orthogonal frequency-division multiplexing (OFDM) systems. One of the major impediments to deploying OFDM is the high peak-to-mean envelope power ratio (PMEPR) of uncoded OFDM signals. PMEPR reduction in OFDM transmission can be implemented [1][19] by using codes constructed from the sequences in the complementary sequence sets, especially GCSs.

GCPs were initially constructed by the recursive methods [11][3]. An extensive study on this topic was made by Davis and Jedwab in [7] by a direct construction of polyphase complementary sequences based on generalized Boolean functions (GBFs), which have been referred to as the standard GCSs subsequently. Non-standard GCPs were studied in [16][8][9] and complementary sequence sets were constructed in [18][21] based on GBFs later on.

All the aforementioned sequences are constructed over the phase-shift keying (PSK) constellations. Since quadrature amplitude modulation (QAM) are widely employed in high rate OFDM transmissions, 16-QAM sequences based on weighted quaternary PSK (QPSK) GCSs were studied by Rößing and Tarokh [20] in 2001. Chong et al. [5] then proposed a construction of 16-QAM GCSs based on standard GCSs over QPSK and first-order offsets in three cases. It was pointed out in [5] that an OFDM system with 16-QAM GCSs has a higher code rate than that with binary or quaternary standard GCSs, given the same PMEPR constraint. In 2006, Lee and Golomb [13] proposed a construction of 64-QAM GCSs with the weighted-sum of three standard GCSs over QPSK and first-order offsets in five cases. Further improvements of constructions of GCSs over 16-QAM and 64-QAM were given by Li et al. [14] and Chang et al. [6] later on. These results were extended to the general construction GCSs over 4q-QAM by Li et al. [15] in 2010 and Liu et al. [17] in 2013, respectively. All these GCSs over QAM are constructed based on standard QPSK GCSs and compatible offsets. Depending on the algebraic structure of the compatible offsets, the GCSs proposed in [15] and [17] are referred to as the generalized cases I-III and the generalized cases IV-V, respectively.

In 2018, Budišin and Spasojevi´c [2] introduced a new recursive algorithm in multiplicative form to generate GCPs over QAM by para-unitary (PU) matrices, where any element of a sequence can be generated by indexing the entries of unitary matrices with the binary representation of the discrete time index. Sequences derived from Munitary matrix over QAM constellation are referred to as the M-Qum case. It is shown that the 1-Qum case and 2-Qum case can generate the sequences in the generalized cases I-III [15] and cases IV-V [17], respectively. Moreover, a large number of new GCSs over QAM are produced from the M-Qum case when M≥2. For instance, the numerical results show that the overall increase in the total number of GCSs including 1-Qum and 2-Qum cases of length 1024 is up to 59%,242%, and 340%, for 64-, 256-, and 1024-QAM, respectively. However, for given q and sequence length 2m, the acceptable unitary matrices over QAM can be obtained only by exhaustive search, and the lack of explicit algebraic expression of GCSs leads to unexpected duplication for M-Qum case when M≥2.

Although the GCSs over QAM proposed in our construction are represented by explicit algebraic expression of weighted-sum of standard GCSs over QPSK, the ideas here are inspired by the para-unitary algorithm [2] and the Golay array pairs (GAPs) [10]. GAPs and their relationship with GCPs over PSK by a three-stage construction process were introduced by F. Fiedler et al. [10] in 2008. We extend this idea from PSK modulation to QAM modulation, and propose a mapping from a GAP of size 2×2×⋯×2m to a large number of GCPs over QAM of length 2m instead of previous three-stage construction process. We also make a connection of the construction of the GAPs and the specified PU matrices with multi-variables over 4q-QAM. Finally, by the technique to derive GBFs from PU matrices introduced in our recent work [24], two new general constructions of GCSs over 4q-QAM are obtained.

On the other hand, from the proof of the proposed constructions, the GCSs proposed in this paper give the explicit algebraic expressions of GCSs from the PU construction in [2] for special M-Qum cases when M≥1. Moreover, our proof implies all the mentioned GCSs over QAM in this paper can be regarded as projections of Golay complementary arrays of size 2×2×⋯×2, so the results in this paper provide a partial solution to an open problem from [10] for GAPs of size 2×2×⋯×2:

How can the three-stage construction process be used to simplify or extend known results on the construction of Golay sequences in QAM modulation?

The rest of this paper is organized as follows. In the next section, we introduce the definitions of GCP and GCS, and the known constructions of the GCPs over QAM. In Section 3, we present two new general constructions of 4q-QAM GCSs including the generalized cases I-V as special cases in Theorem 1 and 2. Enumerations of the new GCSs other than the generalized cases I-V for q=4 and q=6 are given in Section 4. The proofs of our main results are presented in the following two sections. In Section 5, we explain our main theory on GAPs, PU matrices and corresponding GBFs. What’s more, we propose the array form of our result in Theorem 5 and 6, namely 4q-QAM GAPs based on PU matrices, from which the main result on GCSs can be derived directly. The proofs of Theorem 5 and 6 are shown in Section 6. We conclude the paper in Section 7.

The following notations will be used throughout the paper.

A complex-valued sequence of length L can be expressed by a function F(y):ZL→C, i.e.,

A pair of sequences {F(y),G(y)} of length L is said to be Golay complementary pair (GCP) if

And either sequence in a GCP is called a Golay complementary sequence (GCS) [11].

A generalized Boolean function (GBF) f(x) (or f(x1,x2,⋯,xm)) over Z4 is a function from Fm2 to Z4. Such a function can be uniquely expressed as a linear combination over Z4 of the monomials

where the coefficient of each monomial belongs to Z4.

where ξ=√−1 is a fourth primitive root of unity.

There are several constructions of GCPs over QPSK based on GBFs, such as [7], [16], [8] and [9]. The most typical GCPs are so called standard GCPs given in [7], which are associated with GBFs over Z4 given below.

form a GCP over QPSK.

In this subsection, we show some of the known results about sequence and GCPs over QAM based on the weighted sums of sequences over QPSK.

A vectorial GBF (V-GBF) is a function from Fm2 to Zq4, denoted by

where →n denotes the q-dimension vector (n,n,⋯,n). The offset V-GBFs →s(x) and paring difference V-GBFs →μ(x) proposed in the generalized cases I-III given by Li et al. [15] and the generalised cases IV-V given by Liu et al. [17] are shown below respectively.

([17]) A complex number is called a Gaussian integer if its real and imaginary part are both integers. Define

Then Q a one-to-one mapping from Zq−14 to Qq, which is a set consisting of 4q−1 Gaussian integers.

In this section, we will propose two new constructions of GCPs over 4q-QAM. The generalized cases I-III [15] and generalized cases IV-V [17] are special cases of our first and second constructions, respectively. Different from the offset V-GBFs →s(x) and paring difference V-GBFs →μ(x) shown in Fact 2 and 3, the new proposed →s(x) and →μ(x) relate to the factorization of the integer q.

Let q=q0⋅q1⋯qm be a factorization of q, where qk(0≤k≤m) are positive integers. For 1≤k≤m, define Tk as sets of integers by

The rationale of the definition of ρk:Zq→Tσ(k) is guaranteed by the following remark.

Our first construction includes the results in the generalized cases I-III in [15] as a special case.

Sequences over 4q-QAM of length 2m associated with V-GBFs in (5) form a GCP if the offset V-GBFs →s(x) and paring difference V-GBFs →μ(x) satisfy the following conditions:

The detailed proof of Theorem 1 will be given in Sections 5 and 6. We first explain the sequences in Theorem 1 by the following examples.

Let the factorization of q be trivial, i.e., q=q0⋅q1⋯qm such that qk=q for k=ω and qk=1 for k≠ω. Let σ be the identity permutation. We have

Moreover, new GCPs and GCSs over QAM can be constructed from Theorem 1 if q is a composite number and q=q0⋅q1⋯qm is a non-trivial factorization. Two examples are given below to illustrate it.

For q=4, suppose that the factorization q=q0⋅q1⋯qm=2×1×⋯×2 and σ is the identity permutation. Then we have

Thus the sequence pair {F(y),G(y)} over 46-QAM associated with the V-GBFs

To the best of our knowledge, the expressions of offset V-GBFs shown in the above examples have never been reported before.

In this subsection, we slightly modify the conditions in the first construction, and obtain our second construction which include the generalized cases IV-V in [17].