Structural optimization is a popular method for designing objects such as bridge trusses, airplane wings, and optical devices. Unfortunately, the quality of solutions depends heavily on how the problem is parameterized. In this paper, we propose using the implicit bias over functions induced by neural networks to improve the parameterization of structural optimization. Rather than directly optimizing densities on a grid, we instead optimize the parameters of a neural network which outputs those densities. This reparameterization leads to different and often better solutions. On a selection of 116 structural optimization tasks, our approach produces an optimal design 50 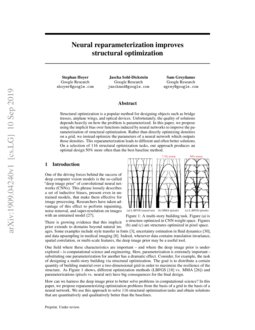 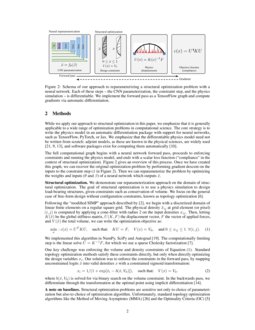 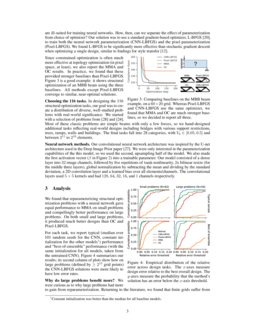 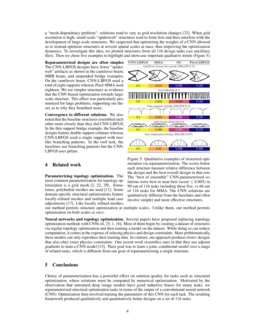 A Tutorial on Structural Optimization

Learning to simulate and design for structural engineering

On Structural Parameterizations of the Offensive Alliance Problem

The Offensive Alliance problem has been studied extensively during the l...
Ajinkya Gaikwad, et al. ∙

An important new trend in additive manufacturing is the use of optimizat...
Daniel J. Perry, et al. ∙

One of the driving forces behind the success of deep computer vision models is the so-called “deep image prior" of convolutional neural networks (CNNs). This phrase loosely describes a set of inductive biases, present even in untrained models, that make them effective for image processing. Researchers have taken advantage of this effect to perform inpainting, noise removal, and super-resolution on images with an untrained model

There is growing evidence that this implicit prior extends to domains beyond natural images. Some examples include style transfer in fonts Azadi et al. (2018)

One field where these characteristics are important – and where the deep image prior is under-explored – is computational science and engineering. Here, parameterization is extremely important – substituting one parameterization for another has a dramatic effect. Consider, for example, the task of designing a multi-story building via structural optimization. The goal is to distribute a certain quantity of building material over a two-dimensional grid in order to maximize the resilience of the structure. As Figure 1 shows, different optimization methods (LBFGS (Liu & Nocedal, 1989) vs. MMA (Svanberg, 1987)) and parameterizations (pixels vs. neural net) have big consequences for the final design.

How can we harness the deep image prior to better solve problems in computational science? In this paper, we propose reparameterizing optimization problems from the basis of a grid to the basis of a neural network. We use this approach to solve 116 structural optimization tasks and obtain solutions that are quantitatively and qualitatively better than the baselines.

While we apply our approach to structural optimization in this paper, we emphasize that it is generally applicable to a wide range of optimization problems in computational science. The core strategy is to write the physics model in an automatic differentiation package with support for neural networks, such as TensorFlow, PyTorch, or Jax. We emphasize that the differentiable physics model need not be written from scratch: adjoint models, as these are known in the physical sciences, are widely used

The full computational graph begins with a neural network forward pass, proceeds to enforcing constraints and running the physics model, and ends with a scalar loss function (“compliance" in the context of structural optimization). Figure

2 gives an overview of this process. Once we have created this graph, we can recover the original optimization problem by performing gradient descent on the inputs to the constraint step (^x in Figure 2). Then we can reparameterize the problem by optimizing the weights and inputs (θ and β) of a neural network which outputs ^x.

Following the “modified SIMP" approach described by Andreassen et al. (2011), we begin with a discretized domain of linear finite elements on a regular square grid. The physical density ~xij at grid element (or pixel) (i,j) is computed by applying a cone-filter with radius 2 on the input densities xij. Then, letting K(~x) be the global stiffness matrix, U(K,F)

F the vector of applied forces, and V(~x) the total volume, we can write the optimization objective as:

We implemented this algorithm in NumPy, SciPy and Autograd Maclaurin et al. (2015). The computationally limiting step is the linear solve U=K−1F, for which we use a sparse Cholesky factorization Chen et al. (2008).

One key challenge was enforcing the volume and density constraints of Equation (1). Standard topology optimization methods satisfy these constraints directly, but only when directly optimizing the design variables xi

. Our solution was to enforce the constraints in the forward pass, by mapping unconstrained logits

^x into valid densities x with a constrained sigmoid transformation:

where b(^x,V0) is solved for via binary search on the volume constraint. In the backwards pass, we differentiate through the transformation at the optimal point using implicit differentiation Griewank & Faure (2002).

A note on baselines. Structural optimization problems are sensitive not only to choice of parameterization but also to choice of optimization algorithm. Unfortunately, standard topology optimization algorithms like the Method of Moving Asymptotes (MMA) Svanberg (1987) and the Optimality Criteria (OC) Bendsøe (1995) are ill-suited for training neural networks. How, then, can we separate the effect of parameterization from choice of optimizer? Our solution was to use a standard gradient-based optimizer, L-BFGS Nocedal (1980)

, to train both the neural network parameterization (CNN-LBFGS) and the pixel parameterization (Pixel-LBFGS). We found L-BFGS to be significantly more effective than stochastic gradient descent when optimizing a single design, similar to findings for style transfer

Since constrained optimization is often much more effective at topology optimization (in pixel space, at least), we also report the MMA and OC results. In practice, we found that these provided stronger baselines than Pixel-LBFGS. Figure 3 is a good example: it shows structural optimization of an MBB beam using the three baselines. All methods except Pixel-LBFGS converge to similar, near-optimal solutions.

Choosing the 116 tasks. In designing the 116 structural optimization tasks, our goal was to create a distribution of diverse, well-studied problems with real-world significance. We started with a selection of problems from Valdez et al. (2017) and Sokół (2011). Most of these classic problems are simple beams with only a few forces, so we hand-designed additional tasks reflecting real-world designs including bridges with various support restrictions, trees, ramps, walls and buildings. The final tasks fall into 28 categories, with V0∈[0.05,0.5] and between 211 to 216 elements.

Neural network methods. Our convolutional neural network architecture was inspired by the U-net architecture used in the Deep Image Prior paper Ulyanov et al. (2018). We were only interested in the parameterization capabilities of the this model, so we used the second, upsampling half of the model. We also made the first activation vector (β in Figure 2) into a trainable parameter. Our model consisted of a dense layer into 32 image channels, followed by five repetitions of tanh nonlinearity, 2

x bilinear resize (for the middle three layers), global normalization by subtracting the mean and dividing by the standard deviation, a 2D convolution layer and a learned bias over all elements/channels. The convolutional layers used

We found that reparameterizing structural optimization problems with a neural network gave equal performance to MMA on small problems and compellingly better performance on large problems. On both small and large problems, it produced much better designs than OC and Pixel-LBFGS.

For each task, we report typical (median over 101 random seeds for the CNN, constant initialization for the other models111Constant initialization was better than the median for all baseline models.) performance and “best-of-ensemble" performance (with the same initialization for all models, taken from the untrained CNN). Figure 4 summarizes our results; its second column of plots show how on large problems (defined by ≥215 grid points) the CNN-LBFGS solutions were more likely to have low error rates.

Why do large problems benefit more? We were curious as to why large problems had more to gain from reparameterization. Returning to the literature, we found that finite grids suffer from a “mesh-dependency problem": solutions tend to vary as grid resolution changes Sigmund & Petersson (1998). When grid resolution is high, small-scale “spiderweb" structures tend to form first and then interfere with the development of large-scale structures. We suspected that optimizing the weights of a CNN allowed us to instead optimize structures at several spatial scales at once, thus improving the optimization dynamics. To investigate this idea, we plotted structures from all 116 design tasks (see ancilliary files). Then we chose five examples to highlight and showcase important qualitative trends (Figure 5).

Reparameterized designs are often simpler. The CNN-LBFGS designs have fewer “spiderweb" artifacts as shown in the cantilever beam, MBB beam, and suspended bridge examples. On the cantilever beam, CNN-LBFGS used a total of eight supports whereas Pixel-MMA used eighteen. We see simpler structures as evidence that the CNN biased optimization towards large-scale structure. This effect was particularly pronounced for large problems, supporting our theory as to why they benefited more.

Neural networks and topology optimization. Several papers have proposed replacing topology optimization methods with CNNs Banga et al. (2018); Sosnovik & Oseledets (2019); Alter (2018); Jiang et al. (2019). Most of them begin by creating a dataset of structures via regular topology optimization and then training a model on the dataset. While doing so can reduce computation, it comes at the expense of relaxing physics and design constraints. More problematically, these models can only reproduce their training data. In contrast, our approach produces better designs that also obey exact physics constraints. One recent work resembles ours in that they use adjoint gradients to train a CNN model Jiang & Fan (2019). Their goal was to learn a joint, conditional model over a range of related tasks, which is different from our goal of reparameterizing a single structure.

Choice of parameterization has a powerful effect on solution quality for tasks such as structural optimization, where solutions must be computed by numerical optimization. Motivated by the observation that untrained deep image models have good inductive biases for many tasks, we reparameterized structural optimization tasks in terms of the output of a convolutional neural network (CNN). Optimization then involved training the parameters of this CNN for each task. The resulting framework produced qualitatively and quantitatively better designs on a set of 116 tasks.