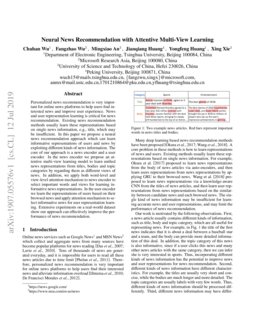 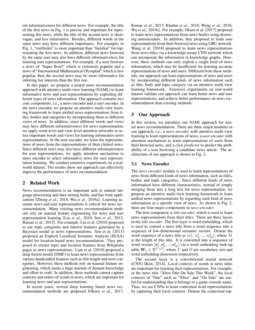 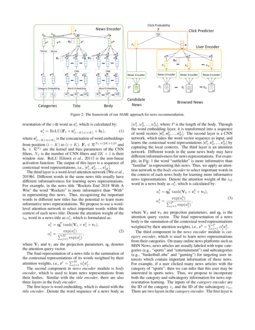 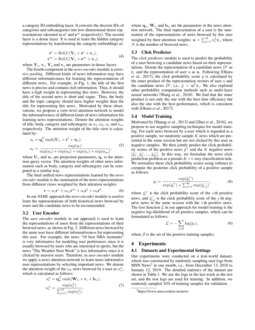 Many deep learning based news recommendation methods have been proposed

News recommendation is an important task in natural language processing and data mining fields, and has wide applications

to predict the probability of a user browsing a candidate news article. The architecture of our approach is shown in Fig.

The first component is title encoder, which is used to learn news representations from their titles. There are three layers in the title encoder

[wt1,wt2,...,wtM], where M is the length of this title. It is converted into a sequence of word vectors [et1,et2,...,etM] via a word embedding look-up table We∈RV×D, where V and D are vocabulary size and word embedding dimension respectively.

The second layer is a convolutional neural network (CNN)

where et(i−K):(i+K) is the concatenation of word embeddings from position (i−K) to (i+K). Ft∈RNf×(2K+1)D and bt∈RNf are the kernel and bias parameters of the CNN filters, Nf is the number of CNN filters and 2K+1

is their window size. ReLU

is the non-linear activation function. The output of this layer is a sequence of contextual word representations, i.e.,

The third layer is a word-level attention network [Wu et al.2019b]. Different words in the same news title usually have different informativeness for learning news representations. For example, in the news title “Rockets End 2018 With A Win” the word “Rockets” is more informative than “With” in representing this news. Thus, recognizing the important words in different new titles has the potential to learn more informative news representations. We propose to use a word-level attention network to select important words within the context of each news title. Denote the attention weight of the ith word in a news title as αti, which is formulated as:

where Vt and vt are the projection parameters, qt denotes the attention query vector.

The second component in news encoder module is body encoder, which is used to learn news representations from their bodies. Similar with the title encoder, there are also three layers in the body encoder.

The first layer is word embedding, which is shared with the title encoder. Denote the word sequence of a news body as [wb1,wb2,...,wbP], where P is the length of the body. Through the word embedding layer, it is transformed into a sequence of word vectors [eb1,eb2,...,ebP]. The second layer is a CNN network, which takes the word vector sequence as input, and learns the contextual word representations [cb1,cb2,...,cbP] by capturing the local contexts. The third layer is an attention network. Different words in the same news body may have different informativeness for news representations. For example, in Fig. 1 the word “outfielder” is more informative than “familiar” in representing this news. Thus, we apply an attention network to the body encoder to select important words in the context of each news body for learning more informative news representations. Denote the attention weight of the ith word in a news body as αbi, which is calculated by:

where Vb and vb are projection parameters, and qb is the attention query vector. The final representation of a news body is the summation of the contextual word representations weighted by their attention weights, i.e., rb=∑Pj=1αbjcbj.

where Vc, vc, Vs and vs are parameters in dense layers.

The fourth component in the news encoder module is attentive pooling. Different kinds of news information may have different informativeness for learning the representations of different news. For example, in Fig. 1, the title of the first news is precise and contains rich information. Thus, it should have a high weight in representing this news. However, the title of the second news is short and vague. Thus, the body and the topic category should have higher weights than the title for representing this news. Motivated by these observations, we propose a view-level attention network to model the informativeness of different kinds of news information for learning news representations. Denote the attention weights of title, body, category and subcategory as αt, αb, αc and αsc respectively. The attention weight of the title view is calculated by:

where Uv and uv are projection parameters, qv is the attention query vector. The attention weights of other news information such as body, category and subcategory can be computed in a similar way.

In our NAML approach the news encoder module is used to learn the representations of both historical news browsed by users and the candidate news to be recommended.

. Different news browsed by the same user have different informativeness for representing this user. For example, the news “10 best NBA moments” is very informative for modeling user preferences since it is usually browsed by users who are interested in sports, but the news “The Weather Next Week” is less informative since it is clicked by massive users. Therefore, in

user encoder module we apply a news attention network to learn more informative user representations by selecting important news. We denote the attention weight of the ith news browsed by a user as αni, which is calculated as follows:

where qn, Wn and bn are the parameters in the news attention network. The final representation of a user is the summation of the representations of news browsed by this user weighted by their attention weights: u=∑Ni=1αniri, where N is the number of browsed news.

Motivated by [Huang et al.2013] and [Zhai et al.2016], we propose to use negative sampling techniques for model training. For each news browsed by a user which is regarded as a positive sample, we randomly sample K news which are presented in the same session but are not clicked by this user as negative samples. We then jointly predict the click probability scores of the positive news ^y+ and the K negative news [^y−1,^y−2,...,^y−K]. In this way, we formulate the news click prediction problem as a pseudo K+1-way classification task. We normalize these click probability scores using softmax to compute the posterior click probability of a positive sample as follows:

L in our approach for model training is the negative log-likelihood of all positive samples, which can be formulated as follows:

where S is the set of the positive training samples.

Our experiments were conducted on a real-world dataset, which was constructed by randomly sampling user logs from MSN News333https://www.msn.com/en-us/news in one month, i.e., from December 13, 2018 to January 12, 2019. The detailed statistics of the dataset are shown in Table 1. We use the logs in the last week as the test set, and the rest logs are used for training. In addition, we randomly sampled 10% of training samples for validation.

In our experiments, the dimensions of word embeddings and category embeddings were set to 300 and 100 respectively. We used the pre-trained Glove embedding [Pennington et al.2014] in our approach. The number of CNN filters was set to 400, and the window size was 3. The dimension of the dense layers in the category view was set to 400. The sizes of attention queries was set to 200. The negative sampling ratio K was set to 4. We applied 20% dropout  [Srivastava et al.2014] to each layer in our approach to mitigate overfitting. Adam [Kingma and Ba2014]

was used as the optimization algorithm. The batch size was set to 100. These hyperparameters were selected according to the validation set. The metrics in our experiments include the average AUC, MRR, nDCG@5 and nDCG@10 scores over all impressions. We independently repeated each experiment for 10 times and reported the average performance.

First, we will evaluate the performance of our approach by comparing it with several baseline methods. The methods to be compared include: (1) LibFM [Rendle2012], which is a state-of-the-art feature-based matrix factorization method; (2) CNN [Kim2014], applying CNN to the concatenation of news titles, bodies and categories to learn news representations; (3) DSSM [Huang et al.2013], a deep structured semantic model with word hashing via character trigram and multiple dense layers; (4) Wide&Deep [Cheng et al.2016], using the combination of a wide linear channel and a deep neural network channel; (5) DeepFM [Guo et al.2017], using a combination with factorization machines and neural networks; (6) DFM [Lian et al.2018], a deep fusion model by using combinations of dense layers with different depths; (7) DKN [Wang et al.2018], a deep news recommendation method based on knowledge-aware CNN; (8) NAML, our neural news recommendation approach with attentive multi-view learning. The experimental results of different methods are summarized in Table 2.

Third, our approach can consistently outperform other baseline methods. Since the characteristics of news titles, bodies and categories are usually divergent, simply concatenating the features extracted from these sources may be sub-optimal. Different from baseline methods, our approach uses a multi-view framework to incorporate different information as different views. In addition, different words, news and views may have different informativeness for representing news and users. Our approach can simultaneously select important words, news and views, which can build more informative news and user representations.

In this section, we conducted several experiments to validate the effectiveness of attentive multi-view learning framework in our model. First, we explore the effectiveness of multi-view framework in our NAML approach. The performance of NAML and its variants with different combinations of views is shown in Fig. 3(a). According to Fig. 3(a), we have several observations. First, the model with the body view achieves better performance than those with the title or category view only. This is intuitive because the bodies of news usually contain the original information of news, and can provide rich information for modeling news topics. Second, the title and category views are also informative for news recommendation. This is probably because titles usually have decisive influence on users’ reading behaviors. Thus, incorporating news titles is useful for modeling the characteristics of news and users. In addition, since categories of news are important clues of news topics, incorporating the category view is also useful for recommendation. Third, combine all three views can further improve the performance of our approach. These results validate the effectiveness of our multi-view framework.

Then, we want to visually explore the effectiveness of the word- and news-level attention networks. For the word-level attention network, we only visualize the attention weights of the words in news titles since news bodies are usually too long. The visualization results of several clicked news from a randomly selected users are shown in Fig. 5. From Fig. 5, we find the attention network can effectively recognize important words within news articles. For example, the word “NBA” and “Rockets” are highlighted, since these words are very informative for representing news topics, while the word “December” is assigned a low attention weight since it is less informative for learning news topics. These results show that our approach can learn informative news representations by recognizing important words. From Fig. 5, we also find our approach can also effectively recognize important news of a user. For example, the news “Rockets set NBA 3 - point record , blast Wizards” gains high attention weight because it is very informative for modeling user preferences, while the news “Today in History : December 22” gains low attention weight, since it is not very informative for representing users. These results show that our model can effectively evaluate the different importance of words and news articles for learning informative news representations.

In this paper, we propose a neural news recommendation approach with attentive multi-view learning (NAML). The core of our approach is a news encoder and a user encoder. In the news encoder, we propose a multi-view learning framework to learn unified news representations by incorporating titles, bodies and categories as different views of news. We also apply attention mechanism to news encoder to select important words and views for learning informative news representations. In the user encoder, we learn representations of users from their browsed news, and apply a news attention network to select important news for learning informative user representations. Extensive experiments on real-world dataset show our approach can improve the performance of news recommendation and outperform many baseline methods.