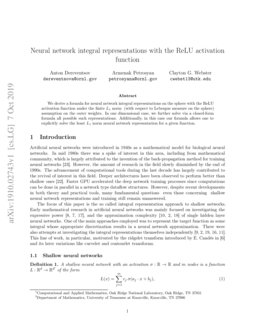 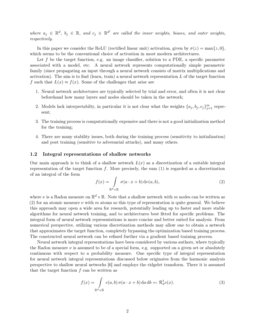 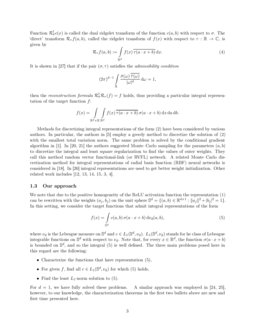 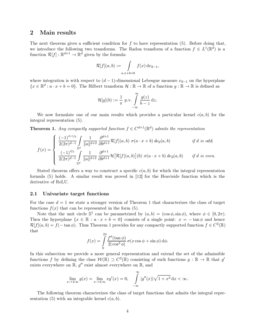 Artificial neural networks were introduced in 1940s as a mathematical model for biological neural networks. In mid 1980s there was a spike of interest in this area, including from mathematical community, which is largely attributed to the invention of the back-propagation method for training neural networks [23]. However, the amount of research in the field slowly diminished by the end of 1990s. The advancement of computational tools during the last decade has largely contributed to the revival of interest in this field. Deeper architectures have been observed to perform better than shallow ones [22]. Faster GPU accelerated the deep network training processes since computations can be done in parallel in a network type dataflow structures. However, despite recent developments in both theory and practical tools, many fundamental questions even those concerning shallow neural network representations and training still remain unanswered.

The focus of this paper is the so called integral representation approach to shallow networks. Early mathematical research in artificial neural networks was mainly focused on investigating the expressive power [8, 7, 17], and the approximation complexity [10, 2, 18] of single hidden layer neural networks. One of the main approaches employed was to represent the target function as some integral whose appropriate discretization results in a neural network approximation. There were also attempts at investigating the integral representations themselves independently [9, 2, 19, 16, 11]. This line of work, in particular, motivated by the ridgelet transform introduced by E. Candès in [6] and its later variations like curvelet and contourlet transforms.

A shallow neural network with an activation σ:R→R and m nodes is a function L:Rd→Rd′ of the form

where aj∈Rd, bj∈R, and cj∈Rd′ are called the inner weights, biases, and outer weights, respectively.

In this paper we consider the ReLU (rectified linear unit) activation, given by

σ(z)=max{z,0}, which seems to be the conventional choice of activation in most modern architectures.

L of the target function f such that L(x)≈f(x). Some of the challenges that arise are

where ν is a Radon measure on Rd×R. Note that a shallow network with m nodes can be written as (2) for an atomic measure ν with m atoms so this type of representation is quite general. We believe this approach may open a wide area for research, potentially leading up to faster and more stable algorithms for neural network training, and to architectures best fitted for specific problems. The integral form of neural network representations is more concise and better suited for analysis. From numerical perspective, utilizing various discretization methods may allow one to obtain a network that approximates the target function, completely bypassing the optimization based training process. The constructed neural network can be refined further via a gradient based training process.

Neural network integral representations have been considered by various authors, where typically the Radon measure ν

[6] and employs the ridgelet transform. There it is assumed that the target function f can be written as

It is shown in [27] that if the pair (σ,τ) satisfies the admissibility condition

Methods for discretizing integral representations of the form (2) have been considered by various authors. In particular, the authors in [5] employ a greedy method to discretize the solution of (2) with the smallest total variation norm. The same problem is solved by the conditional gradient algorithm in [1]. In [20, 21] the authors suggested Monte–Carlo sampling for the parameters (a,b)

to discretize the integral and least square regularization to find the values of outer weights. They call this method random vector functional-link (or RVFL) network. A related Monte–Carlo discretization method for integral representations of radial basis function (RBF) neural networks is considered in

We note that due to the positive homogeneity of the ReLU activation function the representation (1) can be rewritten with the weights (aj,bj) on the unit sphere Sd={(a,b)∈Rd+1:∥aj∥2+|bj|2=1}. In this setting, we consider the target functions that admit integral representations of the form

where νd is the Lebesgue measure on Sd and c∈L1(Sd,νd). L1(Sd,νd) stands for he class of Lebesgue integrable functions on Sd with respect to νd. Note that, for every x∈Rd, the function σ(a⋅x+b) is bounded on Sd, and so the integral (5) is well defined. The three main problems posed here in this regard are the following:

For d=1, we have fully solved these problems. A similar approach was employed in [24, 25], however, to our knowledge, the characterization theorems in the first two bullets above are new and first time presented here.

The next theorem gives a sufficient condition for f to have representation (5). Before doing that, we introduce the following two transforms. The Radon transform of a function f∈L1(Rd) is a function R[f]:Rd+1→Rd given by the formula:

We now formulate one of our main results which provides a particular kernel c(a,b) for the integral representation (5).

Stated theorem offers a way to construct a specific c(a,b) for which the integral representation formula (5) holds. A similar result was proved in [12] for the Heaviside function which is the derivative of ReLU.

For the case d=1 we state a stronger version of Theorem 1 that characterizes the class of target functions f(x) that can be represented in the form (5).

In this subsection we provide a more general representation and extend the set of the admissible functions f by defining the class W(R)⊃C2(R) consisting of such functions g:R→R that g′ exists everywhere on R, g′′ exist almost everywhere on R, and

The following theorem characterizes the class of target functions that admits the integral representation (5) with an integrable kernel c(a,b).

The function f admits the representation

The following theorem characterizes the class W(R) as the functions that admit an integral representation with an appropriate integrable weight function.

Since in Theorem 3 we make an assumption c∈L1[0,2π], we can pose an interesting question of finding the kernel c(a,b) with the smallest L1-norm for a given target function f. In particular, L1-norm minimization is commonly used in compressed sensing for finding a sparse solution. In the next theorem we answer this question.

A similar result has been obtained by the authors in [24] and its multidimensional analogue in [25]. They show that the value

where A are is the set of all Radon measures on Sd×R and ∥⋅∥TV is the total variation norm, for d=1 is exactly equal to

They do not make assumptions on the smoothness of the function f, instead the second derivative is interpreted in the distributional sense. This result is consistent with that in Theorem 4, if we do change of variables from Sd−1×R to Sd.

Statement of the lemma is trivial for d=1. For d>1 consider the following change of variables given by the spherical coordinates

To complete the proof, we change the variable ϕ1∈[0,π] to β=cotϕ1∈R to get cosϕ1=\nicefracβ√1+β2 and sinϕ1=\nicefrac1√1+β2. Substituting into the above integral provides the required result. ∎

We also use the following technical result, which is a corollary of Proposition 8.1 from [12].

Let H:R→R be the Heaviside function, i.e. H(x)=\nicefrac(1+sgn(x))2. Then for any compactly supported function f in Cd(Rd) the following reconstruction formula holds:

We now proceed to the proof of Theorem 1. Let d be odd. From Lemma 1 we get

where we use the positive homogeneity of Radon transform

Then integration by parts provides

and applying Lemma 2 completes the proof of this case. The case of even d is proven analogously.

Before proving the theorem we perform several related calculations. From the equality σ(z)=\nicefrac|z|2+\nicefracz2 we obtain

and, in the same way,

From the mutual orthogonality of the functions {sinϕ,cosϕ,|cosϕ|,s(ϕ)} we deduce

We now prove the direct implication. Assume that a function f admits the integral representation

with a weight function c∈L1[0,2π]. Note that due to the mutual orthogonality of the functions {sinϕ,cosϕ,|cosϕ|,s(ϕ)} we can assume without loss of generality that α=β=γ=η=0 by replacing the weight function c(ϕ) with

Then from the mutual orthogonality of {c(ϕ),sinϕ,cosϕ,|cosϕ|,s(ϕ)} we deduce

By using the relation cos(arctanx)=\nicefrac1√1+x2 we obtain

Next, we show the existence of the derivative f′ and that limx→±∞xf′(x)=0. Let H denote the Heaviside step function, then by using dominated convergence theorem we get for any x>0

Next we show that the second derivative f′′ exists almost everywhere. Indeed, from (12) we see that f′′(x) exists at every x such that −arctanx is a Lebesgue point of (c(ϕ)+c(ϕ+π))cosϕ, which is almost everywhere since c∈L1[0,2π]. In that case we get

Finally, by changing the variable from x∈R to ϕ=−arctanx∈(−\nicefracπ2,\nicefracπ2), we estimate

Lastly, we show that the weight function c has the form (8) with some k∈W(R). Denote

Combining these relations we conclude

Since we initially subtracted the term αcosϕ+βsinϕ+γ|cos(x)|+ηs(ϕ) from the weight function c(ϕ), in a general case we will have

which completes the proof of the direct implication.

We now prove the inverse implication. Assume that function f has the form

with some function g∈W(R) and constants α,β,γ,η∈R. Similarly to the direct case, we can assume that α=β=γ=η=0 by replacing function f(x) with