Named entity recognition (NER) is a vital task in language technology. Existing neural models for NER rely mostly on dedicated word-level representations, which suffer from two main shortcomings: 1) the vocabulary size is large, yielding large memory requirements and training time, and 2) they cannot learn morphological representations. We adopt a neural solution based on bidirectional LSTMs and conditional random fields, where we rely on subword units, namely characters, phonemes, and bytes, to remedy the above shortcomings. We conducted experiments on a large dataset covering four languages with up to 5.5M utterances per language. Our experiments show that 1) with increasing training data, performance of models trained solely on subword units becomes closer to that of models with dedicated word-level embeddings (91.35 vs 93.92 F1 for English), while using a much smaller vocabulary size (332 vs 74K), 2) subword units enhance models with dedicated word-level embeddings, and 3) combining different subword units improves performance. 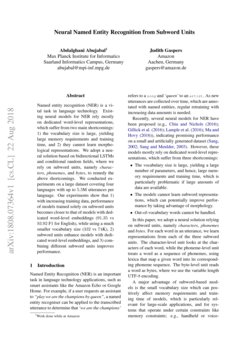 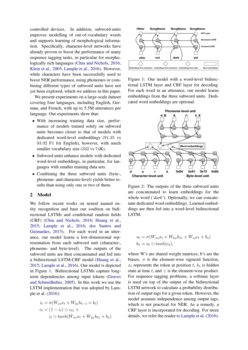 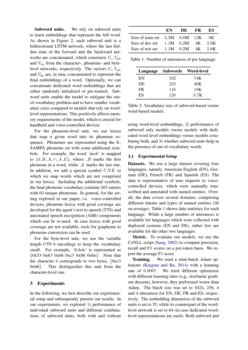 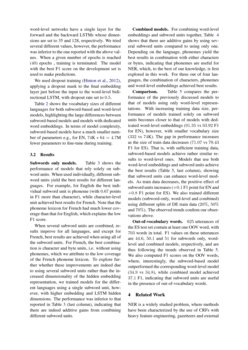 Named Entity Recognition (NER) is an important task in language technology applications, such as smart assistants like the Amazon Echo or Google Home. For example, if a user requests an assistant to “play we are the champions by queen”, a named entity recogniser can be applied to the transcribed utterance to determine that ‘we are the champions’ refers to a song and ‘queen’ to an artist. As new utterances are collected over time, which are annotated with named entities, regular retraining with increasing data amounts is needed.

We adopt a neural solution relying on subword units, namely characters, phonemes and bytes. For each word in an utterance, we learn representations from each of the three subword units. The character-level unit looks at the characters of each word, while the phoneme-level unit treats a word as a sequence of phonemes, using lexica that map a given word into its corresponding phoneme sequence. The byte-level unit reads a word as bytes, where we use the variable length UTF-8 encoding.

A major advantage of subword-based models is the small vocabulary size which can positively affect memory requirements and training time of models, which is particularly relevant for large-scale applications, and for systems that operate under certain constraints like memory constraints; e.g., handheld or voice-controlled devices. In addition, subword units improve modelling of out-of-vocabulary words and support learning of morphological information. Specifically, character-level networks have already proven to boost the performance of many sequence tagging tasks, in particular for morphologically rich languages (Chiu and Nichols, 2016; Klein et al., 2003; Lample et al., 2016). In this paper, we combine different types of subword units for NER.

We present experiments on a large-scale dataset covering four languages, including English, German, and French, with up to 5.5M utterances per language. Our experiments show that:

where W’s are shared weight matrices, b’s are the biases, σ

is the element-wise sigmoid function,

xt represents the token at position t, ht is hidden state at time t, and ⊙

is the element-wise product. For sequence tagging problems, a softmax layer is used on top of the output of the bidirectional LSTM network to calculate a probability distribution of output tags for a given token. However, the model assumes independence among output tags, which is not practical for NER. As a remedy, a CRF layer is incorporated for decoding. For more details, we refer the reader to

Subword units. We rely on subword units to learn embeddings that represent the full word. As shown in Figure 2, each subword unit is a bidirectional LSTM network, where the last hidden state of the forward and the backward networks are concatenated, which constructs Vc,Vph and Vby

from the character-, phoneme- and byte-level networks, respectively. The vectors

Vc,Vph and Vby are, in turn, concatenated to represent the final embeddings of a word. Optionally, we can concatenate dedicated word embeddings that are either randomly initialized or pre-trained. Subword units enable the model to mitigate the out-of-vocabulary problem and to have smaller vocabulary sizes compared to models that rely on word-level representations. This positively affects memory requirements of the model, which is crucial for handheld and voice-controlled devices

For the phoneme-level unit, we use lexica that map a given word into its phoneme sequence. Phonemes are represented using the X-SAMPA phoneme set with some additional symbols. For example, the word ‘dark’ is mapped to {d_B,A,r∖,k_E}, where _B marks the first phoneme in a word, while _E marks the last one. In addition, we add a special symbol UNK to which we map words which are not comprised in our lexica. Including the additional symbols, the final phoneme vocabulary contains 265 entries with 60 unique phonemes. In general, for the setting explored in our paper, i.e. voice-controlled devices, phoneme lexica with good coverage are developed for the agent’s text to speech (TTS) and automated speech recognition (ASR) components which can be re-used. In case lexica with good coverage are not available, tools for grapheme to phoneme conversion can be used.

For the byte-level unit, we use the variable length UTF-8 encodings to keep the vocabulary small. For example, ‘Schön’ is represented as {0x53 0x63 0x68 0xc3 0xb6 0x6e}. Note that the character ö corresponds to two bytes, {0xc3 0xb6}. This distinguishes this unit from the character-level one.

In the following, we first describe our experimental setup and subsequently present our results. In our experiments, we explored 1) performance of individual subword units and different combinations of subword units, both with and without using word-level embeddings, 2) performance of subword only models versus models with dedicated word level embeddings versus models combining both, and 3) whether subword units help in the presence of out-of-vocabulary words.

Datasets. We use a large dataset covering four languages, namely American English (EN), German (DE), French (FR) and Spanish (ES). The data is representative of user requests to voice-controlled devices, which were manually transcribed and annotated with named entities. Overall, the data covers several domains, comprising different intents and types of named entities (36 on average). Table 1 shows data statistics for each language. While a large number of utterances is available for languages which were collected with deployed systems (EN and DE), rather few are available for the other two languages.

Metric. To evaluate our models, we use the CoNLL script (Sang, 2002) to compute precision, recall and F1 scores on a per-token basis. We report the average F1 score.

. We tried different optimizers with different learning rates (e.g., stochastic gradient descent), however, they performed worse than Adam. The batch size was set to 1024, 256, 4 and 4 utterances for EN, DE, FR and ES, respectively. The embedding dimension of the subword units is set to 35, while its counterpart of the word-level network is set to 64 (in case dedicated word-level representations are used). Both subword and word-level networks have a single layer for the forward and the backward LSTMs whose dimensions are set to 35 and 128, respectively. We tried several different values, however, the performance was inferior to the one reported with the above values. When a given number of epochs is reached (

40) epochs , training is terminated. The model with the best F1 score on the development set is used to make predictions.

We used dropout training (Hinton et al., 2012), applying a dropout mask to the final embedding layer just before the input to the word-level bidirectional LSTM, with dropout rate set to 0.5.

Subwords only models. Table 3 shows the performance of models that rely solely on subword units. When used individually, different subword units yield the best results for different languages. For example, for English the best individual subword unit is phoneme (with 0.67

points in F1 more than character), while character-level unit achieved best results for French. Note that the phoneme lexicon for French had much lower coverage than that for English, which explains the low F1 score.

When several subword units are combined, results improve for all languages, and except for French, best results are achieved when using all of the subword units. For French, the best combination is character and byte units, i.e. without using phonemes, which we attribute to the low coverage of the French phoneme lexicon. To explore further whether these improvements are indeed due to using several subword units rather than the increased dimensionality of the hidden embedding representation, we trained models for the different languages using a single subword unit, however, with higher embedding and LSTM hidden dimensions. The performance was inferior to that reported in Table 3 (last column), indicating that there are indeed additive gains from combining different subword units.

Combined models. For combining word-level embeddings and subword units together, Table  4 shows that there are additive gains by using several subword units compared to using only one. Depending on the language, phonemes yield the best results in combination with either characters or bytes, indicating that phonemes are useful for NER. For three out of four languages, the combination of characters, phonemes and word-level embeddings achieved best results.

Comparison. Table 5 compares the performance of the previously discussed models to that of models using only word-level representations. With increasing training data size, performance of models trained solely on subword units becomes closer to that of models with dedicated word-level embeddings (91.35 vs 93.92 F1 for EN), however, with smaller vocabulary size (332 vs 74K). The gap in performance increases as the size of train data decreases (71.07 vs 79.43 F1 for ES). That is, with sufficient training data, subword-based models achieve rather similar results to word-level ones. Models that use both word-level embeddings and subword units achieve the best results (Table 5, last column), showing that subword units can enhance word-level models. As train data decreases, the positive effect of subword units increases (+0.1 F1 point for EN and +0.8 F1 point for ES). We also trained different models (subword-only, word-level and combined) using different splits of DE train data (20%, 50% and 70%). The observed trends confirm our observations above.

Out-of-vocabulary words. 625 utterances of the ES test set contain at least one OOV word, with 703 words in total. F1 values on these utterances are 44.6, 50.1 and 51 for subwords only, word-level and combined models, respectively, and are thus following the trends observed in Table 5. We also computed F1 scores on the OOV words, where, interestingly, the subword-based model outperformed the corresponding word-level model (34.9 vs 34.8), while combined model achieved 37.1 F1, indicating that subword units are useful in the presence of out-of-vocabulary words.

represent words as sequences of phonemes, which serve as universal representation across languages to facilitate cross-lingual transfer learning. Chiu and Nichols

use a convolutional neural network to learn character-level embeddings and LSTM units on the word level. Santos and Guimaraẽs

dos Santos and Guimarães (2015) propose the CharWNN network, a similar model to that of Chiu and Nichols Chiu and Nichols (2016). Gillick et al. Gillick et al. (2016) employ a sequence-to-sequence model with a novel tagging scheme. The model relies on bytes, allowing the joint training on different languages for NER, and eliminating the need for tokenization. Finally, Yang et al. Yang et al. (2016) adopt a similar model to that of Lample et al. Lample et al. (2016), however, they replace LSTMs with GRUs units. Furthermore, they study the multi-lingual and multi-task joint training, which we plan to address in future work.

Overall, existing methods mostly utilize dedicated word embeddings rather than subword units. While some work has also addressed characters or bytes, using phonemes or a combination of different subword units have not been explored, which we address in this work.