Echocardiography has become routinely used in the diagnosis of cardiomyopathy and abnormal cardiac blood flow. However, manually measuring myocardial motion and cardiac blood flow from echocardiogram is time-consuming and error-prone. Computer algorithms that can automatically track and quantify myocardial motion and cardiac blood flow are highly sought after, but have not been very successful due to noise and high variability of echocardiography. In this work, we propose a neural multi-scale self-supervised registration (NMSR) method for automated myocardial and cardiac blood flow dense tracking. NMSR incorporates two novel components: 1) utilizing a deep neural net to parameterize the velocity field between two image frames, and 2) optimizing the parameters of the neural net in a sequential multi-scale fashion to account for large variations within the velocity field. Experiments demonstrate that NMSR yields significantly better registration accuracy than state-of-the-art methods, such as advanced normalization tools (ANTs) and VoxelMorph, for both myocardial and cardiac blood flow dense tracking. Our approach promises to provide a fully automated method for fast and accurate analyses of echocardiograms. 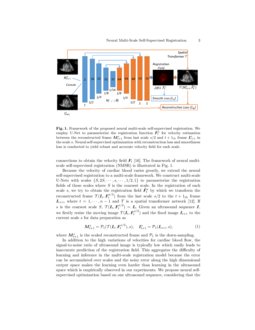 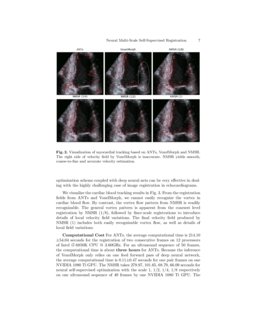 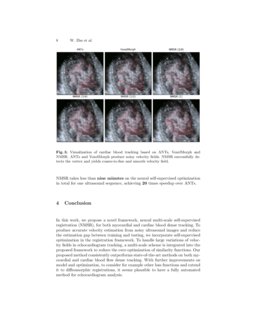 Registration is a fundamental task in medical robotics and is often a cr...
Wentao Zhu, et al. ∙

Cardiovascular diseases are the leading cause of mortality and morbidity globally. Echocardiogram is a non-invasive ultrasonic imaging test that exams the heart in motion. Because of the relatively low cost and ease of access, it has become a routinely used diagnostic tool in cardiology. Echocardiogram provides a wealth of information. Besides the assessment of the geometry and pumping capacity of the heart, echocardiogram has been used for the evaluation of the global and regional myocardial contractibility using speckle tracking techniques [8].

The use of contrast agents in echocardiogram has been proposed to further improve the imaging quality of echocardiogram. The advantages of using contrast include 1) a sharper demarcation between the left ventricular cavity and the myocardium, and 2) easier detection of sludges and thrombi in the heart. In addition, a high-power ultrasound beam produces a swirling pattern in the contrast-enhanced blood pool, which facilitates the visualization of the ventricular flow vortex. Unlike the conventional color Doppler technique, which estimates the flow velocity along a specific angle, the vortex imaging in contrast echocardiogram enables flow visualization and quantification in 2D, which is an important hemodynamic indicator of the heart’s pumping performance and efficiency

There are many previous methods on deformable registration that can be utilized for dense tracking in echocardiograms [9]. Traditional registration methods are based on the optimization in registration field space such as elastic-type models [5, 18], FFD [17], Demons [20] and statistical parametric mapping [2]. Diffeomorphic transformations preserve topology and many methods are derived from them such as LDDMM [7] and SyN [4]

[15, 19]. Recent unsupervised deep learning based registrations, such as VoxelMorph [6]

, are facilitated by the spatial transformer network

[21, 12], and the VoxelMorph is further extended to diffeomorphic transformation and Bayesian framework [10]. Adversarial similarity network adds an extra discriminator and uses adversarial training to improve the unsupervised registration [11]. These purely learning based methods cannot be directly applied to ultrasound images for velocity estimation especially for vortex detection in cardiac blood flow because of great noise in echocardiogram, large velocity variations of cardiac blood flow and large amounts of missing and new blood within the ultrasound plane.

[9], we propose a neural self-supervised optimization based multi-scale framework for dense tracking in echocardiograms as illustrated in Fig. 1. The neural self-supervised optimization yields accurate velocity field estimation by eliminating the gap between the estimation on the training set and that on the test set and alleviating the optimization difficulties such as local minima. Multi-scale strategy provides a sequential optimization pathway to the flow tracking that naturally emulates the formation of the fractal patterns of turbulent flow.

We denote an ultrasound sequence by I={I1,I2,⋯,It,⋯,In}, where It∈Rh×w×c is the tth frame of I, and h, w and c are image height, width and the number of channels respectively. In this work, we focus on calculating the registration field Ft as velocity field estimation which can be used by dense tracking for the two neighbor frames It and It+1. We employ U-Net with skip connections to obtain the velocity field Ft [16]. The framework of neural multi-scale self-supervised registration (NMSR) is illustrated in Fig. 1.

Because the velocity of cardiac blood varies greatly, we extend the neural self-supervised registration to a multi-scale framework. We construct multi-scale U-Nets with scales {S,2S,⋯,s,⋯,1/2,1} to parameterize the registration fields of these scales where S is the coarsest scale. In the registration of each scale s, we try to obtain the registration field ~Fst by which we transform the reconstructed frame T(It,Fs/2t) from the last scale s/2 to the t+1th frame It+1, where t=1,⋯,n−1 and T is a spatial transformer network [12]. If s is the coarsest scale S, T(It,Fs/2t)=It. Given an ultrasound sequence I, we firstly resize the moving image T(It,Fs/2t) and the fixed image It+1 to the current scale s for data preparation as

where Mst+1 is the scaled reconstructed frame and P1 is the down-sampling.

In addition to the high variations of velocities for cardiac blood flow, the signal-to-noise ratio of ultrasound image is typically low which easily leads to inaccurate prediction of the registration field. This aggregates the difficulty of learning and inference in the multi-scale registration model because the error can be accumulated over scales and the noisy error along the high dimensional output space makes the learning even harder than learning in the ultrasound space which is empirically observed in our experiments. We propose neural self-supervised optimization based on one ultrasound sequence, considering that the optimization based methods can eliminate the undesirable generalization ability of purely learning based model, and the settings and motions are consistent within one ultrasound sequence. We use stochastic optimization for the neural parameterized registration to alleviate the optimization difficulties such as local minima in traditional registration methods [14]. The neural self-supervised optimization for the current scale s and ultrasound sequence I can be formulated

After the neural self-supervised optimization, we obtain the optimal parameters θs⋆ of the neural network and can calculate the velocity field ~Fst for the reconstructed frame T(It,Fs/2t) from the last scale s/2. We calculate the registration field Fst for the ultrasound frame It by combining registration field Fs/2t of the last scale and intermediate field ~Fst. For each pixel position p in the ultrasound frame It, we can obtain the final position ^p and the combined registration filed Fst by

We only use the first channel of echocardiography images (e.g., treated as gray-scale images) with the pixel values normalized to be in [0,1]. For cardiac blood tracking, we extract cardiac blood region by 1) creating masks of the left ventricular blood pool at the end of the systole and the end of the diastole, 2) using active contour model to fit 100 uniformly sampled spline points along a circle into the boundary of cardiac blood mask [13]

For unsupervised learning or self-supervised optimization, one of the main challenges is the model evaluation. Manually labeling the corresponding points for evaluation is time-consuming, laborious and inaccurate, because the total size of one frame is

and the signal-to-noise ratio is low. Instead of using pixel position based evaluation metric, we use reconstruction based metrics, i.e., the mean square error (MSE) and the mean local cross correlation (Mean CC) with radius as 10. For the metrics in Table

We compare our approach to symmetric normalization (SyN) with cross-correlation similarity as implemented in ANTs [4, 3], and VoxelMorph [6]

. ANTs (SyN) is a traditional optimization based method and VoxelMorph is a deep learning based unsupervised registration with a similar network structure and loss function as NMSR. For the purpose of ablation studies, we report the results of

Quantitative comparison results of our model against the state-of-the-arts on both myocardial and cardiac blood flow dense tracking are shown in Table 1. We highlight the following a few observations: 1) NMSRVI (1) achieves the best performances, and outperforms ANTs in terms of both MSE and mean CC on both tasks, likely due to the representation and optimization efficiency of deep neural nets; 2) NMSRV yields consistently better results than VoxelMorph, demonstrating the efficacy of self-supervised optimization during the test phase for improving velocity field estimation and reducing the estimation gap between training and testing; 3) NMSR (1) achieves better performance than NMSR on all experiments, demonstrating the benefit of sequential multi-scale optimization in echocardiogram registration. The multi-scale scheme alleviates the over-optimization of reconstruction loss, which can be visually noticed from Fig. 2 and 3; and 4) NMSRV (1) obtains better performance than NMSR (1), illustrating the benefit of using pretrained models as an initialization for NMSR, further confirmed by the better performance of NMSRVI over NMSRV.

Visualizations We visualize the myocardial tracking results based on ANTs, VoxelMorph and the intermediate registration fields from NMSRVI with four different scales in Fig. 2. We randomly choose one frame from these ultrasound images. From Fig. 2, we note that the registration field from ANTs is noisy, and the velocity direction from VoxelMorph for the right myocardial is incorrect. By contrast, NMSR (1/8) produces the smoothest registration field, and NMSR (1) generates more detailed velocity estimation that preserves both large and low-scale velocity variations. The coarse-to-fine results illustrate that the multi-scale optimization scheme coupled with deep neural nets can be very effective in dealing with the highly challenging case of image registration in echocardiograms.

We visualize the cardiac blood tracking results in Fig. 3. From the registration fields from ANTs and VoxelMorph, we cannot easily recognize the vortex in cardiac blood flow. By contrast, the vortex flow pattern from NMSR is readily recognizable. The general vortex pattern is apparent from the coarsest level registration by NMSR (1/8), followed by finer-scale registrations to introduce details of local velocity field variations. The final velocity field produced by NMSR (1) includes both easily recognizable vortex flow, as well as details of local field variations.

In this work, we propose a novel framework, neural multi-scale self-supervised registration (NMSR), for both myocardial and cardiac blood dense tracking. To produce accurate velocity estimation from noisy ultrasound images and reduce the estimation gap between training and testing, we incorporate self-supervised optimization in the registration framework. To handle large variations of velocity fields in echocardiogram tracking, a multi-scale scheme is integrated into the proposed framework to reduce the over-optimization of similarity functions. Our proposed method consistently outperforms state-of-the-art methods on both myocardial and cardiac blood flow dense tracking. With further improvements on model and optimization, to consider for example other loss functions and extend it to diffeomorphic registrations, it seems plausible to have a fully automated method for echocardiogram analysis.