This paper presents a neural document expansion approach (NeuDEF) that enriches document representations for neural ranking models. NeuDEF harvests expansion terms from queries which lead to clicks on the document and weights these expansion terms with learned attention. It is plugged into a standard neural ranker and learned end-to-end. Experiments on a commercial search log demonstrate that NeuDEF significantly improves the accuracy of state-of-the-art neural rankers and expansion methods on queries with different frequencies. Further studies show the contribution of click queries and learned expansion weights, as well as the influence of document popularity of NeuDEF's effectiveness. 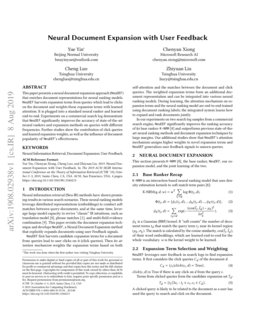 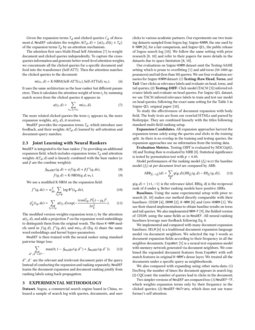 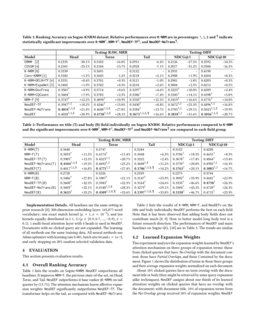 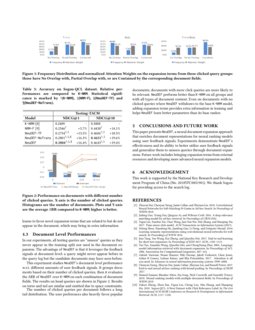 This section presents K-NRM (K-NRM), the base ranker, NeuDEF, our expansion model, and the joint learning of the two.

ϕk is a Gaussian (RBF) kernel. It ”soft counts” the number of document terms td that match the query term tj near its kernel region (μk,σk)

. The match is calculated by the cosine similarity,

cos(→tj,→td), of their word embeddings, which are learned end-to-end for the whole vocabulary. w is the kernel weight to be learned.

click(c,d) is True if there is any click on d from the query c.

A clicked query is likely to be related to the document as a user has used the query to search and click on the document.

It uses the same architecture as the base ranker but different parameters. Then it calculates the attention weight of term tj by summing match scores from the clicked queries it appears in:

NeuDEF provides the expansion terms Td, which introduce user feedback, and their weights A(Td,d) learned by self-attention and document-query matches.

NeuDEF is integrated to the base ranker f by providing an additional expansion field, which includes expansion terms Td and attention weights A(Td,d) and is linearly combined with the base ranker (α and β are the combine weights):

We use a modified K-NRM on the expansion field:

The modified version weights expansion term tj by the attention a(tj,d), and adds a projection P on the expansion word embeddings to distinguish them from the original words. The three K-NRM models used in f(q,d), f′(q,de), and m(ci,d) (Eq. 6) share the same word embeddings and kernel hyper-parameters.

NeuDEF is then trained with the neural ranker using standard pairwise hinge loss:

d+,d− are the relevant and irrelevant document pairs of the query. Instead of conducting the expansion and ranking separately, NeuDEF learns the document expansion and document ranking jointly from ranking labels using back-propagation.

Dataset. Sogou, a commercial search engine based in China, released a sample of search log with queries, documents, and user clicks to various academic partners. Our experiments use two training datasets sampled from Sogou log: Sogou-KNRM, the one used by K-NRM (K-NRM), for a fair comparison, and Sogou-QCL, the public release of Sogou search log (zheng2018sogou). We follow the same setting with prior research (K-NRM; zheng2018sogou) and refer to their papers for more details in the datasets due to space limitation (K-NRM; zheng2018sogou).

Our evaluations on Sogou-KNRM dataset omit the Testing-SAME setting which is prune to overfitting (dai2018convolutional) and add torso (50-1000 appearances) and tail (less than 50) queries. We use four evaluation scenarios for Sogou-KNRM dataset: (1) Testing-Raw Head, Torso, and Tail: User clicks as relevance labels and evaluate on head, torso, and tail queries; (2) Testing-DIFF: Click model (TACM (liu2017time)) inferred relevance labels and evaluate on head queries. For Sogou-QCL dataset, we use TACM inferred relevance labels to train and test our model on head queries, following the exact same setting for the Table 5 in Sogou-QCL original paper (zheng2018sogou).

To study the effectiveness of document expansion with body field, The body texts are from our crawled HTMLs and parsed by Boilerpipe. They are combined linearly with the titles following standard multi-field ranking setup.

Evaluation Metrics. Testing-DIFF is evaluated by NDCG@{1, 10} and Testing-Raw is evaluated by MRR (K-NRM). Statistical significance is tested by permutation test with p<0.05.

Model performances of the ranking model (f2) w.r.t the baseline model (f1) at per document level are compared by ΔRR:

y(q,d)={+1,−1} is the relevance label. RR(q, d) is the reciprocal rank of d under q. Better ranking models have positive ΔRRs.

Two simpler versions of NeuDEF are compared too: (1) NeuDEF-TF, which weights expansion terms only by their frequency in the clicked queries; (2) NeuDEF-NoTrans, which does not use transformer’s self attention.

Implementation Details. All baselines use the same setting in prior research (K-NRM): 300-dimension embedding layer; 165,877-word vocabulary; one exact match kernel (μ=1,σ=10−3); and ten kernels equally distributed in (-1, 1) (μ∈{0.9,0.7,...,−0.9},σ=0.1). 1 multi-head attention layer with 4 heads is used in NeuDEF. Documents with no clicked query are not expanded. The learning of all methods use the same training data. All neural methods use Adam optimizer with learning rate 0.001, batch size 64 and ϵ=1e−5, and early stopping on 20% random selected validation data.

Table 1 lists the results on Sogou-KNRM. NeuDEF outperforms all baselines. It improves NRM-F, the previous state-of-the-art, on Head, Torso, and Tail. NeuDEF outperforms it base ranker (K-NRM) on tail queries by (13.7%). The attention mechanism learns effective expansion weights: NeuDEF significantly outperforms NeuDEF-TF. The transformer helps on the tail, as compared with NeuDEF-NoTrans.

Table 2 lists the results of K-NRM, NRM-F, and NeuDEFs on the title and body individually. NeuDEF performs the best on each field. Note that it has been observed that adding body fields does not contribute much (K-NRM; zamani2018neural). How to better model long body text is a future research direction. The performances of NeuDEF and main baselines on Sogou-QCL (zheng2018sogou) are in Table 3. The trends are similar.

This experiment analyzes the expansion weights learned by NeuDEF’s attention mechanism on three groups of expansion terms: those from clicked queries that have No Overlap with the document content, those have Partial Overlaps, and those Contained by the document. Figure 1 shows the distribution of terms in these three groups and their average expansion weights normalized on each document.

About 10% clicked queries have no term overlap with the document title or body (they might be retrieved by some query expansion-alike techniques). NeuDEF assigns about one thirds of its learned attention weights on clicked queries that have no overlap with the document; with document title, 10% of expansion terms from the No Overlap group received 30% of expansion weights. NeuDEF learns to favor novel expansion terms that are related to but do not appear in the document, which may bring in extra information.

In our experiments, all testing queries are “unseen” queries as they never appear in the training split nor used in the document expansion. The advantage of NeuDEF is that it leverages the feedback signals at document level: a query might never appear before in the query log but the candidate documents may have seen before.

This experiment studies NeuDEF’s document level performance w.r.t. different amounts of user feedback signals. It groups documents based on their number of clicked queries, then it evaluates the ΔRR of NeuDEF over K-NRM on each combination of document fields. The results on head queries are shown in Figure 2. Results on torso and tail are similar and omitted due to space constraints.

The number of clicked queries per document follows a long tail distribution. The user preferences also heavily favor popular documents; documents with more click queries are more likely to be relevant. NeuDEF performs better than K-NRM on all groups and with all types of document content. Even on documents with no clicked queries where NeuDEF withdraws to the base K-NRM model, adding expansion terms provides extra information in training and helps NeuDEF learn better parameters than its base ranker.

This work is supported by the National Key Research and Development Program of China (No. 2018YFC0831901). We thank Sogou for providing access to the search log.