We introduce network with sub-network, a neural network which their weight layer could be removed into sub-neural networks on demand during inference. This method provides selectivity in the number of weight layer. To develop the parameters which could be used in both base and sub-neural networks models, firstly, the weights and biases are copied from sub-models to base-model. Each model is forwarded separately. Gradients from both networks are averaged and, used to update both networks. From the empirical experiment, our base-model achieves the test-accuracy that is comparable to the regularly trained models, while it maintains the ability to remove the weight layers. 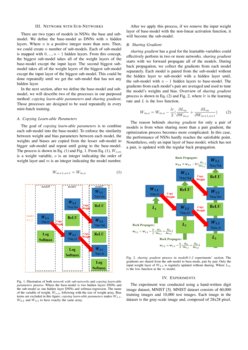 Deep neural networks (DNNs) have been given the attraction in the most recent years from their ability to provide state-of-the-art performance in varied applications. To deploy DNNs into the mobile devices, which are diverse in the specification, raises a question: how to effectively design DNNs by given the specification of the mobile phone? To answer this question, two main factors could be optimized.

[krizhevsky2012imagenet], the model that won ILSVRC-2012 consists of 8-weight layers. ResNet [he2016deep], the winner of ILSVRC-2015, contains of 152-weight layers. From AlexNet, ResNet reduces top-5 test error from 15.3 to 3.57. Even though, the growth in the number of weight layers might reduce the test-error rate of the model, it comes with the trade-off of the second factor, latency. More layers of DNNs means the higher number of variables to compute. This also increases in the memory footprint which is crucial for the mobile device.

In one of the solutions, we might select the model which achieves the real-time performance given a mobile phone. However, if the user differently prefers the performance over the latency, then, this method does not satisfy the user’s demand. One of the results is to let the user select his or her preference thus, match the preference to the most suitable model. However, the memory footprint for keeping various models into the mobile device is exceedingly huge. To satisfy user’s preference in selectivity in both performance and latency, we propose network with sub-networks (NSNs), DNNs which could be removed weight layers without dramatically decrease in performance.

Generally, if one of the weight layers is removed during the inference time, the performance of that model will dramatically be dropped. To explain what we speculate, one of the widely used examples to explain how DNNs operate is to compare it as a feature extraction model. From the first weight layer, extracts the low-level features to the last layers extract the high-level features. This creates a dependent relationship between each weight layer.

is neural networks which could reduce the number of floating point operations (FLOP) during inference depending on the complexity of the input data. The concept of BrachyNet is between the certain immediate layers of neural networks, the output features of those layers might be connected with a branch. The branch consists of the weight layers and a classifier. If the prediction of input data of that branch classifier has higher confidence than the pre-defined threshold then, the output of the model will come out from that branch as the early exit. In another case, if the confidence is low then, the features will go further to process into the deeper layers instead.

is the main inspired of this research. If our purposed method adds or remove weights in depth-wise direction, SNNs append or detach weights in width-wise direction. The range of possible width of networks requires to be pre-defined as the switch. The main research problem is the mean and variance of features which come out from different-width weight layers are generally diverse. SNNs proposed

which applied one for each switch. switchable batch normalization are used to correcting mean and variance of SNNs.

In the next section, after we define the base-model and sub-model, we will describe two of the processes in our purposed method: copying learn-able parameters and sharing gradient. Those processes are designed to be used repeatedly in every mini-batch training.

The goal of copying learn-able parameters is to combine each sub-model into the base-model. To enforce the similarity between weight and bias parameters between each model, the weights and biases are copied from the lesser sub-model to bigger sub-model and repeat until going to the base-model. The process is shown in Eq. (1) and Fig. 1. From Eq. (1), Wo,m is a weight variable, o is an integer indicating the order of weight layer and m is an integer indicating the model number.

After we apply this process, if we remove the input weight layer of base-model with the non-linear activation function, it will become the sub-model.

is the loss function.

The reason behinds sharing gradient for only a pair of models is from when sharing more than a pair gradient, the optimization process becomes more complicated. In this case, the performance of NSNs hardly reaches the satisfiable point. Nonetheless, only an input layer of base-model, which has not a pair, is updated with the regular back propagation.

The experiment was conducted using a hand-written digit image dataset, MNIST [lecun2010mnist]. MNIST dataset consists of 60,000 training images and 10,000 test images. Each image in the dataset is the gray-scale image and, composed of 28x28 pixel. Each image pixel of MNIST image was pre-processed into the range of [0, 1] by dividing all pixel value with 255.

[srivastava2014dropout], p=0.8. The hidden layers were put with dropout rate, p=0.5. In the case of softmax-regression, we did not apply dropout into the model since it was already under-fitting. The base-models were further regulated by using L2-weight penalty.

. Although, we applied with slightly different format of SGD with momentum. From Tensorflow

[abadi2016tensorflow], neural networks framework, regular format of SGD with momentum [momentum2019] was shown in Eq. 3. Where V is the gradient accumulation term, t is the batch-wise iteration step and G is the gradient at t+1. Our format of SGD with momentum is shown in Eq. 4. After we found V, both of format was used the same Eq. 5 to update the weight, W.

NSNs performed better with our format of SGD with momentum comparing the regular format at α=0.9. We speculated that NSNs required the higher proportion of the gradient accumulation, V comparing with the current gradient, G to converge. In the other hand, with the regularly trained DNNs, our format of SGD with momentum performed slightly worse in term of test accuracy. Hence, to perform a fair comparison between both type of models, the regularly-trained models were trained with Eq. 3. Our purposed method models were trained Eq. 4.

We set the training batch as 128. Each model had been training for 600 epoch. However, we reported the best test accuracy which might occur during the training. The initial learning rate,

Comparing with the ref-model1 and model1, the test accuracy of model1 were dropped for an extent. This indicated that our purpose methods negatively affected the performance of the model for ability to removing the weight layers.

The difference in test accuracy between model1 and model2 indicated the bias of our purposed method towards the base-model. We speculated this bias might come from the sharing gradient process. All of the gradients that sub-models received, were averaged from multi-models. However, our base-model had an input layer that updated from gradient from the model itself as shown in Fig. 2.

is applied for learn-able parameters could be used in two or more models. Our purposed method was conducted in the small scale experiment with a few hidden layers DNNs and only with MNIST dataset. The bigger-scale models with the dataset will be focused on future works. We also interest to apply with convolutional neural networks (CNNs) which have been proved to have the better performance in the computer vision tasks.

This research was supported by JSPS KAKENHI Grant Numbers 17K20010.