In this work, we consider a random access IoT wireless network assisted by two aggregators. The nodes and the aggregators are transmitting in a random access manner under slotted time, the aggregators use network-level cooperation. We assume that all the nodes are sharing the same wireless channel to transmit their data to a common destination. The aggregators with out-of-band full duplex capability, are equipped with queues to store data packets that are transmitted by the network nodes and relaying them to the destination node. We characterize the throughput performance of the IoT network. In addition, we obtain the stability conditions for the queues at the aggregators and the average delay of the packets. 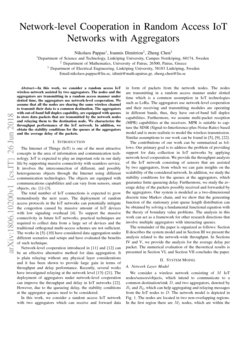 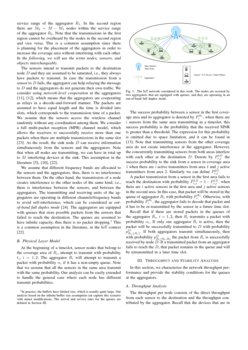 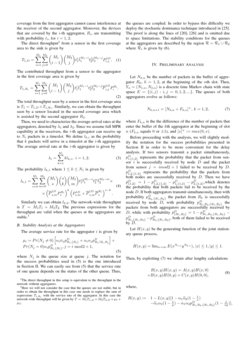 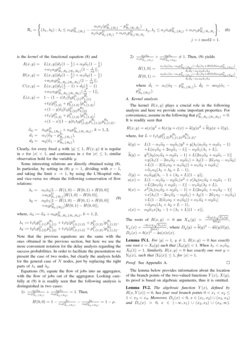 Performance Analysis of a Cooperative Wireless Network with Adaptive Relays: A Network-Level Study

In this work, we investigate the stability region, the throughput perfor...
Ioannis Dimitriou, et al. ∙

On the Benefits of Network-Level Cooperation in Millimeter-Wave Communications

The effect of signals on stability, throughput region, and delay in a tw...
Ioannis Dimitriou, et al. ∙

The Capacity of Smartphone Peer-to-Peer Networks

We consider a network whose links have random capacities and in which a ...
Zdravko I. Botev, et al. ∙

The Internet of Things (IoT) is one of the most attractive concepts in the area of information and communication technology. IoT is expected to play an important role in our daily life by supporting massive connectivity with seamless service. It involves the interconnection of different, and possibly heterogeneous objects through the Internet using different communication technologies. The objects are equipped with communications capabilities and can vary from sensors, smart objects, etc. [1, 2, 3].

The total number of IoT connections is expected to grow tremendously the next years. The deployment of random access protocols in the IoT networks can potentially mitigate the congestion caused by massive amount of IoT devices with low signaling overhead [4]. To support the massive connectivity in future IoT networks, practical techniques are required to collect data from a large set of devices and the traditional orthogonal multi-access schemes are not sufficient. The works in [5, 6, 7, 8, 9, 10] have considered data aggregation under different scenarios and setups and have evaluated the benefits of such technique.

Network-level cooperation introduced in [11] and [12] can be an effective alternative method for data aggregation. It is plain relaying without any physical layer considerations and it has been shown to provide large gain in terms of throughput and delay performance. Recently, several works have investigated relaying at the network level [13, 14, 15, 16, 17, 18, 19, 20, 21]. The deployment of aggregators under network-level cooperation can improve the throughput and delay in IoT networks [22]. However, due to the queueing delay, the stability conditions at the aggregator queues need to be considered.

In this work, we consider a random access IoT network with two aggregators which can receive and forward data in form of packets from the network nodes. The nodes are transmitting in a random access manner under slotted time which is a common assumption in IoT technologies such as LoRa. The aggregators use network-level cooperation and their receiving and transmitting modules are operating in different bands, thus, they have out-of-band full duplex capabilities. Furthermore, we assume multi-packet reception (MPR) capabilities at the receivers. MPR is suitable to capture the SINR (Signal-to-Interference-plus-Noise-Ratio) based model and is more realistic to model the wireless transmission. Similar assumptions to our work can be found in [5, 9, 22].

The contributions of our work can be summarized as follows. Our primary goal is to address the problem of providing support for data collection in IoT networks by applying network-level cooperation. We provide the throughput analysis of the IoT network consisting of sensors that are assisted by two aggregators, from which we can gain insights on the scalability of the considered network. In addition, we study the stability conditions for the queues at the aggregators, which guarantee finite queueing delay. Furthermore, we study the average delay of the packets possibly received and forwarded by the aggregators. Our system is modeled as a two-dimensional discrete time Markov chain, and we show that the generating function of the stationary joint queue length distribution can be obtained by solving a fundamental functional equation with the theory of boundary value problems. The analysis in this work can act as a framework for other research directions that involve multiple aggregators with interacting queues.

The remainder of the paper is organized as follows: Section II describes the system model and in Section III we present the analysis related to the network-wide throughput. In Sections IV and V, we provide the analysis for the average delay per packet. The numerical evaluation of the theoretical results is presented in Section VI, and Section VII concludes the paper.

We consider a wireless network consisting of M IoT nodes/sensors/objects, which intend to communicate to a common destination/sink D, and two aggregators, denoted by R1 and R2, which can help aggregating and relaying messages from the IoT nodes to D. The network model is depicted in Fig. 1. The nodes are located in two non-overlapping regions. In the first region there are M1 nodes, which are within the service range of the aggregator R1. In the second region there are M2=M−M1 nodes within the service range of the aggregator R2. Note that the transmissions in the first region cannot be overheard by the nodes in the second region and vice versa. This is a common assumption since there is planning for the placement of the aggregators in order to increase the coverage area without interfering with each other. In the following, we will use the terms nodes, sensors, and objects interchangeably.

The sensors intend to transmit packets to the destination node D and they are assumed to be saturated, i.e., they always have packets to transmit. In case the transmission from a sensor to D fails, the aggregator can help relaying the message to D and the aggregators do not generate their own traffic. We consider using network-level cooperation at the aggregators [11, 12], which means that the aggregators are cooperating as relays in a decode-and-forward manner. The packets are assumed to have equal length and the time is divided into slots, which corresponds to the transmission time of a packet. We assume that the sensors access the wireless channel randomly without any coordination among them. We consider a full multi-packet reception (MPR) channel model, which allows the receivers to successfully receive more than one packets when there are multiple transmissions in the same slot [23]. As the result, the sink node D can receive information simultaneously from the sensors and the aggregators. Note that when all nodes are transmitting, we can have in total up to M interfering devices at the sink. This assumption in the literature [5, 22, 10].

We assume that different frequency bands are allocated to the sensors and the aggregators, thus, there is no interference between them. On the other hand, the transmission of a node creates interference to the other nodes of the same kind, i.e., there is interference between the sensors, and between the aggregators. The transmitting and receiving units of the aggregators are operating in different channels/frequency bands to avoid self-interference, which can be considered as out-of-band full duplex mode [24]. The aggregators are equipped with queues that store possible packets from the sensors that failed to reach the destination. The queues are assumed to have infinite capacity, thus there is no packet dropping.111In practice, the buffers have limited size, which is usually quite large. Our analysis based on the infinite buffer size assumption can capture this scenario with minor modifications. The arrival and service rates for the queues are defined in Section III. This is a common assumption in the literature, in the IoT context [22].

At the beginning of a timeslot, sensor nodes that belong to the coverage area of Ri

, attempt to transmit with probability

ti, i=1,2. The aggregator Ri will attempt to transmit a packet with probability αi if it has a non-empty queue. Note that we assume that all the sensors in the same area transmit with the same probability. Our analysis can be easily extended to handle the general case where each node has different transmit probabilities.

In this section, we characterize the network throughput performance and provide the stability conditions for the queues at the aggregators.

The probability lk,1 where 1≤k≤N1 is given by

Iii-B Stability Analysis at the Aggregators

The average service rate for the aggregator i is given by

where Nj is the queue size at queue j. The notation for the success probabilities used in (5) is the one introduced in Section II. We can easily see from (5) that the service rate of one queue depends on the status of the other queue. Thus, the queues are coupled. In order to bypass this difficulty we deploy the stochastic dominance technique introduced in [25]. The proof is along the lines of [20, 26] and is omitted due to space limitations. The stability conditions for the queues at the aggregators are described by the region R=R1∪R2 where Ri is given by (6).

where Fk,n is the the difference of the number of packets that enter the buffer of the kth aggregator at the beginning of slot n (Fk,n equals 0 or ±1), and [x]+:=max(0,x).

Let H(x,y) be the generating function of the joint stationary queue process,

Then, by exploiting (7) we obtain after lengthy calculations

is the kernel of the functional equation (8) and

Some interesting relations are directly obtained using (8). In particular, by setting in (8) y=1, dividing with x−1, and taking the limit x→1, by using the L’Hospital rule, and vice-versa we obtain the following conservation of flow relations:

Note that the previous equations are the same with the ones obtained in the previous section, but here we use the more convenient notation for the delay analysis regarding the success probabilities. In order to facilitate the presentation we present the case of two nodes, but clearly the analysis holds for the general case of N nodes, just by replacing the right parts of λ1 and λ2.

The lemma below provides information about the location of the branch points of the two-valued functions Y(x), X(y), its proof is based on algebraic arguments, thus it is omitted.

The algebraic function X(y), y∈[y1,y2] lies on a closed contour M, which is symmetric with respect to the real line and defined by

Here, we proceed with the derivation of the probability generating function of the joint stationary queue length distribution at relays. The analysis is distinguished in two cases according to the values of the parameters.

By applying the transformation, the problem is reduced to the determination of function ~T(z)=H(γ0(z),0) regular for z∈GC, continuous for z∈C∪GC such that, Re(i~T(z))=w(γ0(z)), z∈C. The solution of the Dirichlet problem with boundary condition (12) is:

which is an odd function of

Thus, C=1−ρ. Substituting in (13) we obtain after simple calculations an integral representation of H(x,0) on a real interval for x∈GM, i.e.,

Similarly, we can determine H(0,y) by solving another Dirichlet boundary value problem on the closed contour L. Then, using the fundamental functional equation (8) we uniquely obtain H(x,y).

Using similar arguments as in previous subsection, we have for x∈M