Much of the focus in the design of deep neural networks has been on improving accuracy, leading to more powerful yet highly complex network architectures that are difficult to deploy in practical scenarios, particularly on edge devices such as mobile and other consumer devices, given their high computational and memory requirements. As a result, there has been a recent interest in the design of quantitative metrics for evaluating deep neural networks that accounts for more than just model accuracy as the sole indicator of network performance. In this study, we continue the conversation towards universal metrics for evaluating the performance of deep neural networks for practical usage. In particular, we propose a new balanced metric called NetScore, which is designed specifically to provide a quantitative assessment of the balance between accuracy, computational complexity, and network architecture complexity of a deep neural network. In what is one of the largest comparative analysis between deep neural networks in literature, the NetScore metric, the top-1 accuracy metric, and the popular information density metric were compared across a diverse set of 50 different deep convolutional neural networks for image classification on the ImageNet Large Scale Visual Recognition Challenge (ILSVRC 2012) dataset. The evaluation results across these three metrics for this diverse set of networks are presented in this study to act as a reference guide for practitioners in the field. The proposed NetScore metric, along with the other tested metrics, are by no means perfect, but the hope is to push the conversation towards better universal metrics for evaluating deep neural networks for use in practical scenarios to help guide practitioners in model design. 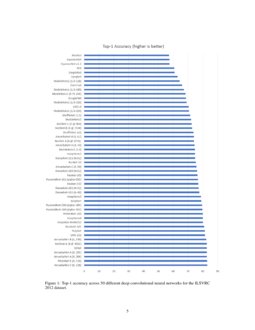 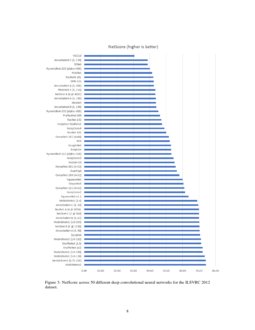 krizhevsky2012imagenet to object detection liu2016ssd and segmentation MaskRCNN . One of the key driving factors behind the tremendous recent successes in deep neural networks has been the availability of massive computing resources thanks to the advances and proliferation of cloud computing and highly parallel computing hardware such as graphics processing units (GPUs). The availability of this wealth of computing resources has enabled researchers to explore significantly more complex and increasingly deeper neural networks that has resulted in significant performance gains over past machine learning methods. For example, in the realm of visual perception, the depth of deep convolutional neural networks with state-of-the-art accuracies have reached hundreds of layers, hundreds of millions of parameters in size, and billions of calculations for inferencing.

While the ability to build such large and complex deep neural networks has led to a constant increase in accuracy, the primary metric for performance widely leveraged for evaluating networks, it has also created significant barriers to the deployment of such networks for practical edge device usage. The practical deployment bottlenecks associated with the powerful yet highly complex deep neural networks in research literature has become even more visible in recent years due to the incredible proliferation of mobile devices, consumer devices, and other edge devices and the increasing demand for machine learning applications in such devices. As a result, the design of deep neural networks that account for more than just accuracy as the sole indicator of network performance and instead strike a strong balance between accuracy and complexity has very recently become a very hot area of research focus, with a number of different deep neural network architectures designed specifically with efficiency in mind iandola2016squeezenet ; howard2017mobilenets ; tinyssd ; munet ; sandler2018mobilenetv2 ; squishednet ; ShuffleNet .

One of the key challenges in designing deep neural networks that strikes a strong balance between accuracy and complexity for practical usage lies in the difficulties with assessing how well a particular network architecture is striking that balance. As previous mentioned, using accuracy as the sole metric for network performance does not provide the proper indicators of how efficient a particular network is in practical scenarios such as deployment on mobile devices and other consumer devices. As a result, there has been a recent interest in the design of quantitative metrics for evaluating deep neural networks that accounts for more than just model accuracy. In particular, it is generally desirable to design such metrics in a manner that is as hardware vendor agnostic as possible so that different network architectures can be compared to each other in a consistent manner. One of the most widely cited metrics in research literature for assessing the performance of deep neural networks that accounts for both accuracy and architectural complexity is the information density metric proposed by Canziani , which attempts to measure the relative amount of accuracy captured within one of the most basic building blocks of a deep neural network: a parameter. More specifically, the information density (D(N)) of a deep neural network N is defined as the accuracy of the deep neural network (denoted by a(N)) divided by the number of parameters needed for representing it (denoted by p(N)),

While highly effective for giving a good general idea of the balance between accuracy and architectural complexity (which also acts as a good indicator for memory requirements), the information density metric does not account for the fact that, depending on the design of the network architecture, the architecture complexity does not necessarily reflect the computational requirements for performing network inference (e.g., MobileNet howard2017mobilenets has more parameters than SqueezeNet iandola2016squeezenet but has lower computational requirements for network inference). Therefore, the exploration and investigation towards universal performance metrics that account for accuracy, architectural complexity, and computational complexity is highly desired as it has the potential to improve network model search and design.

In this study, we continue the conversation towards universal metrics for evaluating the performance of deep neural networks for practical usage. In particular, we propose a new balanced metric called NetScore, which is designed specifically to provide a quantitative assessment of the balance between accuracy, computational complexity, and network architecture complexity of a deep neural network. This paper is organized as follows. Section 2 describes the proposed NetScore metric and the design principles around it. Section 3 presents and discusses experimental results that compare the NetScore, information density, and top-1 accuracy across 60 different deep convolutional neural networks for image classification on the ImageNet Large Scale Visual Recognition Challenge (ILSVRC 2012) dataset ImageNet , making this one of the largest comparative studies between deep neural networks.

The proposed NetScore metric (denoted here as Ω) for assessing the performance of a deep neural network N for practical usage can be defined as:

Model accuracy representation: In the NetScore metric, the obvious incorporation of the model accuracy a(N) of the network N into the metric is in the numerator of the ratio, as an increase in accuracy should naturally lead to an increase in the metric, similar to the information density metric Canziani . We further introduce a coefficient α in the proposed NetScore metric to provide better control over the influence of model accuracy on the overall metric. In particular, we set α=2 to better emphasize the importance of model accuracy in assessing the overall performance of a network in practical usage, as deep convolutional neural networks that have unreasonably low model accuracy remain unusable in practical scenarios, regardless how small or fast the network is. In this study, the unit used for a(N) is in percent top-1 accuracy on the ILSVRC 2012 dataset ImageNet .

Logarithmic scaling: One of the difficulties with comparing the overall performance of different deep neural networks with each other is their great diversity in their model accuracy, architectural complexity, and computational complexity. This makes the dynamic range of the performance metric quite large and unwieldy for practitioners to compare for model search and design purposes. To account for this large dynamic range, we take inspiration from the field of signal processing; in particular, the decibel scale commonly used to express the ratio between one value of a property to another on a logarithmic scale. In the proposed NetScore metric, we transform the ratio between the model accuracy property (a(N)) and the model architectural and computational complexity (p(N) and m(N)) into the logarithmic decibel scale to reduce the dynamic range to within a more readily interpretable range.

To get a better sense regarding the overall performance of the huge wealth of deep convolutional neural networks introduced in research literature in the context of practical usage, we perform a large-scale comparative analysis across a diverse set of 60 different deep convolutional neural networks designed for image classification using the following quantitative performance metrics: i) top-1 accuracy, ii) information density, and iii) the proposed NetScore metric. The dataset of choice for the comparative analysis in this study is the ImageNet Large Scale Visual Recognition Challenge (ILSVRC 2012) dataset ImageNet , which consists of 1000 different classes. To the best of the author’s knowledge, this comparative analysis is one of the largest in research literature and the hope is that the results presented in this study can act as a reference guide for practitioners in the field.

In this study, the units used for p(N) and m(N) for two of the quantitative performance metrics (information density and the proposed NetScore metric) are in M-Params (millions of parameters) and G-MACs (billions of MAC operations), respectively, given that most modern deep convolutional neural networks are within those architectural and computational complexity ranges.

The SqueezeNet family of networks, on the other hand, had much lower relative NetScores compared to the aforementioned efficient networks despite having the top two highest information densities. This observation illustrates the effect of incorporating computational complexity to the assessment of deep convolutional neural networks for practical usage, given that while the SqueezeNet family of networks has significantly lower architectural complexities compared to other tested networks, it also is offset by noticeably higher computational complexities compared to other tested efficient networks such as the MobileNetv1, MobileNetv2, SqueezeNext, and ShuffleNet network families.

The proposed NetScore metric, which by no means is perfect, could potentially be useful for guiding practitioners in model search and design and hopefully push the conversation towards better universal metrics for evaluating deep neural networks for use in practical scenarios. Future work includes incorporating additional or alternative factors that are important to assessing architectural and computational complexities of deep neural networks beyond what is being used in the NetScore metric, as well as finding a good balance between these different factors based on relative importance for the deployment of deep neural networks for practical usage in scenarios such as mobile devices and other edge devices.