We present Nematus, a toolkit for Neural Machine Translation. The toolkit prioritizes high translation accuracy, usability, and extensibility. Nematus has been used to build top-performing submissions to shared translation tasks at WMT and IWSLT, and has been used to train systems for production environments. 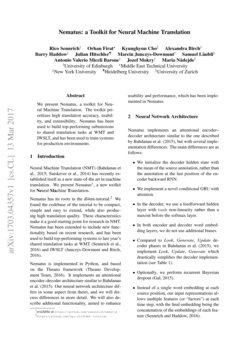 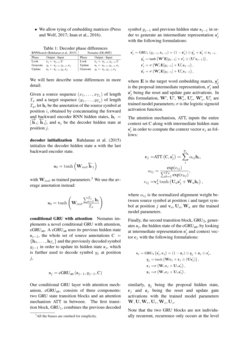 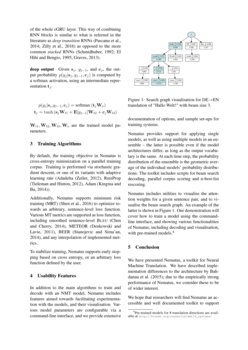 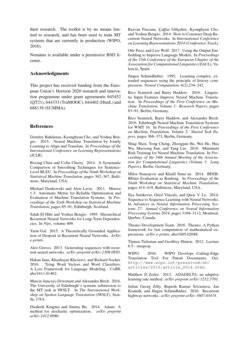 Nematus has its roots in the dl4mt-tutorial.222https://github.com/nyu-dl/dl4mt-tutorial We found the codebase of the tutorial to be compact, simple and easy to extend, while also producing high translation quality. These characteristics make it a good starting point for research in NMT. Nematus has been extended to include new functionality based on recent research, and has been used to build top-performing systems to last year’s shared translation tasks at WMT [Sennrich et al.2016] and IWSLT [Junczys-Dowmunt and Birch2016].

Nematus is implemented in Python, and based on the Theano framework

. It implements an attentional encoder–decoder architecture similar to DBLP:journals/corr/BahdanauCB14. Our neural network architecture differs in some aspect from theirs, and we will discuss differences in more detail. We will also describe additional functionality, aimed to enhance usability and performance, which has been implemented in Nematus.

Nematus implements an attentional encoder–decoder architecture similar to the one described by DBLP:journals/corr/BahdanauCB14, but with several implementation differences. The main differences are as follows:

We will here describe some differences in more detail:

Given a source sequence (x1,…,xTx) of length Tx and a target sequence (y1,…,yTy) of length Ty, let hi be the annotation of the source symbol at position i, obtained by concatenating the forward and backward encoder RNN hidden states, hi=[→hi;←hi], and sj be the decoder hidden state at position j.

with Winit as trained parameters.333All the biases are omitted for simplicity. We use the average annotation instead:

Nematus implements a novel conditional GRU with attention, cGRUatt. A cGRUatt uses its previous hidden state sj−1, the whole set of source annotations C={h1,…,hTx} and the previously decoded symbol yj−1 in order to update its hidden state sj, which is further used to decode symbol yj at position j,

where E is the target word embedding matrix, s–′j is the proposal intermediate representation, r′j and z′j being the reset and update gate activations. In this formulation, W′, U′, W′r, U′r, W′z, U′z are trained model parameters; σ

is the logistic sigmoid activation function.

in order to compute the context vector

Finally, the second transition block, GRU2, generates sj, the hidden state of the cGRUatt, by looking at intermediate representation s′j and context vector cj with the following formulations:

similarly, s–j being the proposal hidden state, rj and zj being the reset and update gate activations with the trained model parameters W,U,Wr,Ur,Wz,Uz.

Note that the two GRU blocks are not individually recurrent, recurrence only occurs at the level of the whole cGRU layer. This way of combining RNN blocks is similar to what is referred in the literature as deep transition RNNs [Pascanu et al.2014, Zilly et al.2016] as opposed to the more common stacked RNNs [Schmidhuber1992, El Hihi and Bengio1995, Graves2013].

p(yj|sj,yj−1,cj) is computed by a softmax activation, using an intermediate representation tj.

Wt1,Wt2,Wt3,Wo are the trained model parameters.

By default, the training objective in Nematus is cross-entropy minimization on a parallel training corpus. Training is performed via stochastic gradient descent, or one of its variants with adaptive learning rate (Adadelta

, and any interpolation of implemented metrics.

To stabilize training, Nematus supports early stopping based on cross entropy, or an arbitrary loss function defined by the user.

In addition to the main algorithms to train and decode with an NMT model, Nematus includes features aimed towards facilitating experimentation with the models, and their visualisation. Various model parameters are configurable via a command-line interface, and we provide extensive documentation of options, and sample set-ups for training systems.

Nematus provides support for applying single models, as well as using multiple models in an ensemble – the latter is possible even if the model architectures differ, as long as the output vocabulary is the same. At each time step, the probability distribution of the ensemble is the geometric average of the individual models’ probability distributions. The toolkit includes scripts for beam search decoding, parallel corpus scoring and n-best-list rescoring.

Nematus includes utilities to visualise the attention weights for a given sentence pair, and to visualise the beam search graph. An example of the latter is shown in Figure 1. Our demonstration will cover how to train a model using the command-line interface, and showing various functionalities of Nematus, including decoding and visualisation, with pre-trained models.444Pre-trained models for 8 translation directions are available at http://statmt.org/rsennrich/wmt16_systems/

We have presented Nematus, a toolkit for Neural Machine Translation. We have described implementation differences to the architecture by DBLP:journals/corr/BahdanauCB14; due to the empirically strong performance of Nematus, we consider these to be of wider interest.

We hope that researchers will find Nematus an accessible and well documented toolkit to support their research. The toolkit is by no means limited to research, and has been used to train MT systems that are currently in production [WIPO2016].

Nematus is available under a permissive BSD license.