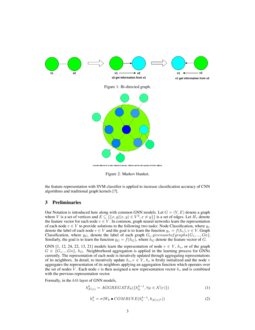 iterations of aggregation, each node is represented by a feature vector which captures the structural information within the node’s k-hop neighborhood. Then the summary operation is applied for the learned representation of each node such as pooling, which is used for the representation of an entire graph.

Many GNN variants applying a variety of neighborhood aggregation, node-level operation, and graph-level pooling have been proposed scarselli2009graph ; battaglia2016interaction ; xu2018representation ; verma2018graph ; santoro2017simple . Structural information is learned in many tasks including node classification, link prediction, and graph classification. They achieved state-of-the-art performance in these tasks. However, in the literate neighborhood aggregation scheme, there is little analysis of the properties of the graph structural data during the learning of the representation. Besides, formal analysis of the graph models in the learning is also limited.

A theoretical framework for analyzing the properties of the graph models is proposed. We formally characterize the properties of the graph models in the literate neighborhood aggregation scheme. In detail, we first introduce Markov blanket, second neighborhood, bi-directed graph, and extraverted edges. Analysis of the close connection between the bi-directed graph and the graph model is then made. Besides, we further explore that basically, a Markov neighborhood is larger than the common neighborhood used in GNN modelsatwood2016diffusion ; niepert2016learning ; zhang2018end ; yanardag2015deep ; normalization2015accelerating ; xu2018representation recently. We then analyze the effectiveness of the proposed second neighborhood, and explore a strategy for the literate neighborhood aggregation scheme in the learning of GNN models.

Our main results are summarized as follows:

The proposed method is validated via experiments on the graph classification datasets, where the strategy of setting the neighborhood for each node is crucial to capture the graph structures. In detail, the performance of GNNs with various aggregation functions atwood2016diffusion ; niepert2016learning ; zhang2018end ; xu2018powerful and WL tests shervashidze2011weisfeiler are compared with the proposed method. Our results confirm the efficiency of the proposed neighborhood enlargement for the learning of GNNs, in the iterate neighbor aggregation scheme. In addition, the proposed method for the neighborhood enlargement outperform the other baselines by test set accuracy. The state-of-the-art performances on many graph classification benchmarks are achieved.

In the following, both empirical and theoretical related work are reviewed.

The design of new GNNS is based on empirical intuition. A GNN model is build to directly process most of the practically useful types of graphs scarselli2009graph , the interaction network is introduced which can reason about how objects in complex systems interact battaglia2016interaction , in the context of spectral graph theory, a formulation of CNNs is developed defferrard2016convolutional

, circular fingerprints are applied to develop a standard molecular feature extraction to learn a graph

duvenaud2015convolutional , a general inductive frame that leverages node features information for sufficient generation of node embeddings are developed hamilton2017inductive , an encoding of the molecular graph is used build the graph convolutions kearnes2016molecular , a diffusion-convolution representation can be learned from graph-structured data for node classification atwood2016diffusion , analogous to image-based convolutional networks, a general approach to extracting locally connected regions from graphs are developed niepert2016learning , both a localized graph convolution module and a novel SortPooling layer are designed for a deep graph model zhang2018end .

Besides the empirical success of GNNS, mathematically studies on GNN’s properties are made. Earliest GNN model can approximate measurable functions in probability

scarselli2009graph . RKHS of the graph kernels is applied to build a graph architecture lei2017deriving . Graph Isomorphism Network is theoretically motivated and a theoretical framework of the sum aggregation is build to learn the graph network xu2018powerful . Besides, models based on classical theory is also developed. For example, the WL subtree kernel shervashidze2011weisfeiler which is based on the theoretical basis of Weisfeiler-Lehman(WL) graph weisfeiler1968reduction is developed. a differentiable graph pooling module is built to generate hierarchical representations of graphs ying2018hierarchical

, the feature representation with SVM classifier is applied to increase classification accuracy of CNN algorithms and traditional graph kernels

Our Notation is introduced here along with common GNN models. Let G=(V,E) denote a graph where V is a set of vertices and E⊆{{x,y|(x,y)∈V2,x≠y}} is a set of edges. Let Hv denote the feature vector for each node v∈V. In common, graph neural networks learn the representation of each node v∈V to provide solutions to the following two tasks: Node Classification, where yv denote the label of each node v∈V and the goal is to learn the function yv=f(hv),v∈V. Graph Classification, where yGi denote the label of each graph Gi,givenasetofgraphs{G1,...,Gn}. Similarly, the goal is to learn the function yG=f(hG), where hG denote the feature vector of G.

Formally, in the kth layer of GNN models,

is a matrix through learning, MAX denotes the operation of element-wise max-pooling. Similarly, MEAN operation

kipf2016semi is replaced with the MAX operation, and this MEAN denotes the operation of element-wise mean-pooling. Furthermore, SUM operation xu2018powerful is also applied where the representation of each node in the neighborhood Nv is accumulated as following:

The discriminative/representational power of the Graph Isomorphism Network ()GIN) xu2018powerful is shown to be equal to the power of the WL test weisfeiler1968reduction . Besides, many other GNN variants can be represented similarly as Equation (1)-(4). For both node and graph classification, the node representation hkv is used for prediction.

Before the introduction to the proposed work, several definitions are introduced as follows. Then, in the literate neighborhood aggregation scheme, analysis on the properties of nodes, edges and neighborhood in GNNs are made. Particularly, the common neighborhood applied in the state-of-the-art GNNs xu2018powerful ; kipf2016semi ; atwood2016diffusion ; niepert2016learning ; zhang2018end are not sufficient for the representation of nodes in the graph. Therefore, we propose a second neighborhood to bring with more sufficiency than the common one.

Definitions are made before the introduction of theoretical analysis on the properties of nodes, edges, and neighborhood in the GNNs.

In the literately neighborhood aggregation scheme, learning a GNN model for the representation of nodes ∀v∈V, G=(V,E) through Equation 1-4 with variants of operation. For example, if the operation is the sum operation and mean operation, formally, in the kth layer of GNN models, ∀v∈V,hkv=f(hk−1v,hk−1u1,⋯,hk−1un),{u1,⋯,un}∈Nv. If the operation is the max operation, similarly, ∀v∈V,hkv=f(hk−1v,humax), humax is the chosen representation through MAX({ReLU(hk−1μ),∀μ∈N(v)}). Then, in the learning of the current state-of-the-art GNNs xu2018powerful ; kipf2016semi ; atwood2016diffusion ; niepert2016learning ; zhang2018end , the representation of all nodes are learned simultaneously in each iteration, that is the joint neighborhood function for each node v∈V is learned simultaneously.

A Markov blanket is a generalized concept of a set for a node in a graphical model, which contains all the variables that shield the node from the rest of the network. More formally, the Markov blanket for a node A in a graph model is the set of nodes ∂A composed of A′s parents, its children, and its children’s other parents. It’s also denoted by MB(A). Besides, each set of nodes in the graph is conditionally independent of A when conditioned on the set ∂A. Formally, for distinct nodes A and B, Pr(A|∂A,B)=Pr(A|∂A).

(a). In the literately neighborhood aggregation scheme with mean or sum operation, formally in the form of joint neighborhood function as ∀v∈V,hkv=f(hk−1v,hk−1u1,⋯,hk−1un),{u1,⋯,un}∈Nv, a graph G=(V,E) is likely to be a bi-directed graph in the learning of representation of each node v∈V.

(b). In the literately neighborhood aggregation scheme with max operation, formally in the from of joinr neighborhood function as ∀v∈V,hkv=f(hk−1v,humax), humax is the chosen representation through MAX({ReLU(hk−1μ),∀μ∈N(v)}), and the graph G=(V,E) is likely to be a bi-directed graph in the learning of representation of each node v∈V.

Similarly, at the kth layer of GNN models with the mean operation hkN(v)=ReLU(W∙MEAN(hk−1u,∀u∈Nv)), representing the mean operation as a linear function of the sum operation, formally, MEAN((hk−1u))=∑μ∈Nv(hk−1μ(v))n,n is the total number of representation vector hk−1u,u∈Nv. Therefore, the node v and the node n get the information with each other if these two nodes are adjacent.

To be noted, as the node v and the node u get the information from each other, the edges in the G=(V,E) are the extraverted edges.

However, at the kth layer of GNN models with the max operation hkN(v)=MAX({ReLU(hk−1μ),∀μ∈N(v)}), suppose G=(V,E) is a bi-directed graph with extraverted edges in the learning of representation of ∀vinV. Then, for ∀μ∈N(v), v gets information from nodes μ. This is contradiction with the max operation, that u only get information from one node in N(v). Therefore, in the literately neighborhood aggregation scheme applying the max operation to learn GNN models, G=(V,E) is not likely to be a bi-directed graph with extraverted edges.

4.3 Common neighborhood is not sufficient

In a bi-directed graph G=(V,E), the node v is conditionally dependent on three sets of nodes G, ∂v and Ncv, and the relation is formally as ∀v∈V and ∀e∈E, Pr(v|G)≥Pr(v|∂v)≥Pr(v|Ncv), where ∂v is the Markov blanket for the node v.

4.4 Second neighborhood is likely to be a Markov blanket

In a bi-directed graph G=(V,E), ∀v∈V and ∀e∈E, the Markov blanket of the node v:∂v is the subset of the second neighbourhood Nsv.

As lwu and lwv are extraverted edges, then w could be the child of v and u could be the parent of w. Therefore, u should be in the ∂v. This is in contradiction with the hypothesis that u is out of the ∂v.

From the other side, in a bi-directed graph G=(V,E), ∀v∈V and ∀e∈E, the second neighbourhood Nsv is the subset of the Markov blanket of the node v ∂v.

Therefore, in a bi-directed graph G=(V,E), ∀v∈V and ∀e∈E, the Nsv is very likely to be equal as ∂v.

Besides, random sampling is applied to chosen nodes in the second neighborhood Nsv randomly, the chosen nodes are used along with all nodes in Ncv together, in case that Nsv is very large which contains many nodes.

Experiment configurations. Our proposed neighborhood enlargement strategy is evaluated. Under this strategy, we consider two variants: (1) the second neighborhood is applied in GINs xu2018powerful .(2) nodes are randomly chosen and added to the common neighborhood in GNNS atwood2016diffusion ; niepert2016learning ; zhang2018end . Both methods are applied to train GINs for the classification experiments. As we will see, both methods show strong empirical performance, not only do the two methods outperform the performance of the state-of-the-art, but also demonstrates easy implementation. For model configuration of the baseline GNNs atwood2016diffusion ; niepert2016learning ; zhang2018end and GINs xu2018powerful

hamilton2017inductive applies max-1-layer respectively. The same graph-level readout (READOUT in Eq) is applied in all models in the experiments, specifically, sum readout and mean readout are applied on bioinformatics and social dataset respectively.

For a fair comparison, 10-fold cross-validation for all datasets is made. Both average and standard deviation of validation accuracies cross the 10-fold validation are reported. For all experiments,

MLPs are applied. Batch normalization is applied to each hidden layer. Adam optimizer is used for the training of all datasets. The initial learning rate is set as

Results. We validate our theoretical analysis of the neighborhood aggregation of GNNs and proposed methods by comparing the test accuracies. Although our theoretical analysis does not directly speak about the generalization and prediction ability of GNNs, it is expected that our proposed methods based on the above analysis can better accurately capture graph structures of interest better in comparison with state-of-the-art for the listed benchmarks.

In this paper, in the iterate neighborhood aggregation scheme, we analyzed the properties of nodes, edges, and neighborhood of the GNNs. Then, on the basis of our analysis, we find the insufficiency of common neighborhood applied in the state-of-the-art GNNs and GINs. Therefore, we proposed a new neighborhood which is more sufficient than the common one. However, from our experiments, we find this new neighborhood costs a high computation if the graph dataset contains several hundreds of nodes. And the achieved performance is still far from satisfactory for some benchmarks. Therefore, future work is likely to reduce computation and improve performance as well.