In this paper, we propose a new neighborhood semantics for contingency logic, by introducing a simple property in standard neighborhood models. This simplifies the neighborhood semantics given in (Fan and van Ditmarsch, 2015), but does not change the set of valid formulas. Under this perspective, among various notions of bisimulation and respective Hennessy-Milner Theorems, we show that c-bisimulation is equivalent to nbh-Δ-bisimulation in the literature, which guides us to understand the essence of the latter notion. This perspective also provides various frame definability and axiomatization results. 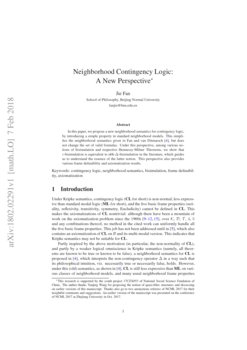 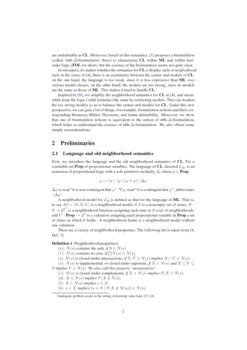 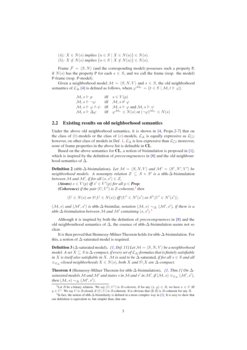 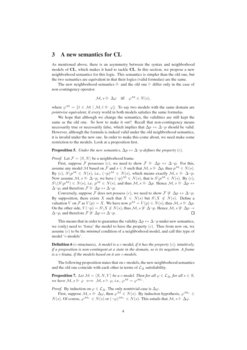 Under Kripke semantics, contingency logic (CL for short) is non-normal, less expressive than standard modal logic (ML for short), and the five basic frame properties (seriality, reflexivity, transitivity, symmetry, Eucludicity) cannot be defined in CL. This makes the axiomatizations of CL nontrivial: although there have been a mountain of work on the axiomatization problem since the 1960s [11, 9, 10, 15, 12], over K, D, T, 4, 5 and any combinations thereof, no method in the cited work can uniformly handle all the five basic frame properties. This job has not been addressed until in [5], which also contains an axiomatization of CL on B and its multi-modal version. This indicates that Kripke semantics may not be suitable for CL.

Partly inspired by the above motivation (in particular, the non-normality of CL), and partly by a weaker logical omniscience in Kripke semantics (namely, all theorems are known to be true or known to be false), a neighborhood semantics for CL is proposed in [4], which interprets the non-contingency operator Δ in a way such that its philosophical intuition, viz. necessarily true or necessarily false, holds. However, under this (old) semantics, as shown in [4], CL is still less expressive than ML on various classes of neighborhood models, and many usual neighborhood frame properties are undefinable in CL. Moreover, based on this semantics, [1] proposes a bisimulation (called ‘nbh-Δ-bisimulation’ there) to characterize CL within ML and within first-order logic (FOL for short), but the essence of the bisimulation seems not quite clear.

In retrospect, no matter whether the semantics for CL is Kripke-style or neigborhood-style in the sense of [4], there is an asymmetry between the syntax and models of CL: on the one hand, the language is too weak, since it is less expressive than ML over various model classes; on the other hand, the models are too strong, since its models are the same as those of ML. This makes it hard to handle CL.111Analogous problem occurs in the setting of knowing-value logic [14, 13].

Inspired by [6], we simplify the neighborhood semantics for CL in [4], and meanwhile keep the logic (valid formulas) the same by restricting models. This can weaken the too strong models so as to balance the syntax and models for CL. Under this new perspective, we can gain a lot of things, for example, bisimulation notions and their corresponding Hennessy-Milner Theorems, and frame definability. Moreover, we show that one of bisimulation notions is equivalent to the notion of nbh-Δ-bisimulation, which helps us understand the essence of nbh-Δ-bisimulation. We also obtain some simple axiomatizations.

There are a variety of neighborhood properties. The following list is taken from [4, Def. 3].

(s): N(s) is supplemented, or closed under supersets, if X∈N(s) and X⊆Y⊆S implies Y∈N(s). We also call this property ‘monotonicity’.

Frame F=⟨S,N⟩ (and the corresponding model) possesses such a property P, if N(s) has the property P for each s∈S, and we call the frame (resp. the model) P-frame (resp. P-model).

Under the above old neighborhood semantics, it is shown in [4, Props.2-7] that on the class of (t)-models or the class of (c)-models, LΔ is equally expressive as L□; however, on other class of models in Def. 1, LΔ is less expressive than L□; moreover, none of frame properties in the above list is definable in CL.

Based on the above semantics for CL, a notion of bisimulation is proposed in [1], which is inspired by the definition of precocongruences in [8] and the old neighbourhood semantics of Δ.

(M,s) and (M′,s′) is nbh-Δ-bisimilar, notation (M,s)∼Δ(M′,s′), if there is a nbh-Δ-bisimulation between M and M′ containing (s,s′).333In fact, the notion of nbh-Δ-bisimilarity is defined in a more complex way in [1]. It is easy to show that our definition is equivalent to, but simpler than, that one.

Although it is inspired by both the definition of precocongruences in [8] and the old neighbourhood semantics of Δ, the essence of nbh-Δ-bisimulation seems not so clear.

It is then proved that Hennessy-Milner Theorem holds for nbh-Δ-bisimulation. For this, a notion of Δ-saturated model is required.

[1, Def. 11] Let M=⟨S,N,V⟩ be a neighborhood model. A set X⊆S is Δ-compact, if every set of LΔ-formulas that is finitely satisfiable in X is itself also satisfiable in X. M is said to be Δ-saturated, if for all s∈S and all ≡LΔ-closed neighborhoods X∈N(s), both X and S∖X are Δ-compact.

3 A new semantics for CL

As mentioned above, there is an asymmetry between the syntax and neighborhood models of CL, which makes it hard to tackle CL. In this section, we propose a new neighborhood semantics for this logic. This semantics is simpler than the old one, but the two semantics are equivalent in that their logics (valid formulas) are the same.

The new neighborhood semantics ⊪ and the old one ⊩ differ only in the case of non-contingency operator.

where φM={t∈M∣M,t⊪φ}. To say two models with the same domain are pointwise equivalent, if every world in both models satisfies the same formulas.

We hope that although we change the semantics, the validities are still kept the same as the old one. So how to make it out? Recall that non-contingency means necessarily true or necessarily false, which implies that Δp↔Δ¬p should be valid. However, although the formula is indeed valid under the old neighborhood semantics, it is invalid under the new one. In order to make this come about, we need make some restriction to the models. Look at a proposition first.

Under the new semantics, Δp↔Δ¬p defines the property (c).

Let F=⟨S,N⟩ be a neighborhood frame.

This means that in order to guarantee the validity Δp↔Δ¬p under new semantics, we (only) need to ‘force’ the model to have the property (c). Thus from now on, we assume (c) to be the minimal condition of a neighborhood model, and call this type of model ‘c-models’.

A model is a c-model, if it has the property (c); intuitively, if a proposition is non-contingent at a state in the domain, so is its negation. A frame is a c-frame, if the models based on it are c-models.

The following proposition states that on c-models, the new neighborhood semantics and the old one coincide with each other in terms of LΔ satisfiability.

By induction on φ∈LΔ. The only nontrivial case is Δφ.

The definition of cN is very natural, in that just as “X∈N(s) or S∖X∈N(s)” corresponds to the old semantics of Δ, X∈cN(s) corresponds to the new semantics of Δ. It is easy to see that every neighborhood model has a sole c-variation, that every such c-variation is a c-model, and moreover, for any neighborhood model M, if M is already a c-model, then c(M)=M.

The proof is by induction on φ, where the only nontrivial case is Δφ. We have

Let Γ⊪cφ denote that Γ entails φ over the class of all c-models, i.e., for each c-model M and each s∈M, if M,s⊪ψ for every ψ∈Γ, then M,s⊪φ. With Props. 7 and 9 in hand, we obtain immediately that

Now we are ready to show the Hennessy-Milner Theorem for c-bisimulation. Since c-bisimulation is defined between c-models, we need also to add the property c into the notion of Δ-saturated models in Def. 3.

Let M=⟨S,N,V⟩ be a c-model. A set X⊆S is Δ-compact, if every set of LΔ-formulas that is finitely satisfiable in X is itself also satisfiable in X. M is said to be Δ-saturated, if for all s∈S and all ≡LΔ-closed neighborhood X∈N(s), X is Δ-compact.444Note that we do not distinguish ≡LΔ here from that in Def. 3 despite different neighborhood semantics. This is because as we show in Prop. 7, on c-models the two neighborhood semantics are the same in terms of LΔ satisfiability. Thus it does not matter which semantics is involved in the current context.

Since every c-variation of a c-model is just the model itself, by Props. 14 and 15, we obtain immediately that